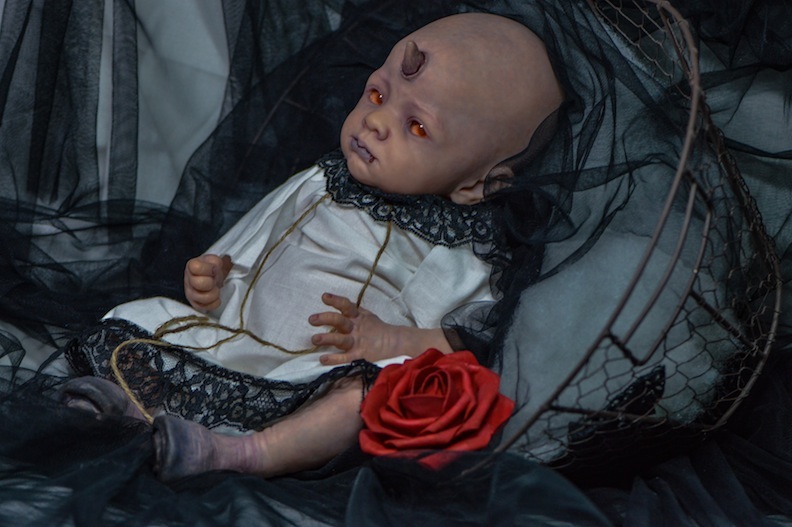 Jeni Razoux used Karola Wegerich’s Rosa kit to create this Demicorn baby. The clay alterations make the baby into something supernatural and compelling.

Summertime is usually the season where kids rule. Sure, many children dominate their household on a weekly basis — if baby isn’t happy, no one’s happy — but normally children’s whims and demands are kept in check. Parental compromise and family bargaining happen throughout the year. In summer, though, school curfews, class deadlines, and frantic last-minute projects fall to the wayside. Minus academic schedules, children are left to be children. Sadly, that’s not always a pretty picture. Thinking of that — “The Bad Seed” meets Barbie — I decided to pair Brenda Mize and Jeni Razoux into this week’s blog. They are the day and night of doll collecting. 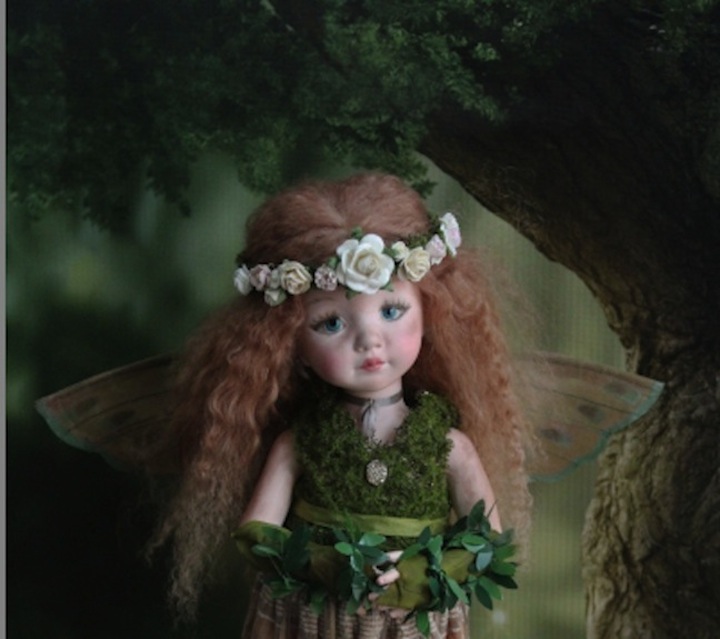 Willow is a bohemian-style fairy from Brenda Mize. The Eyes of Texas dolls are revered for their innocence and wholesomeness. 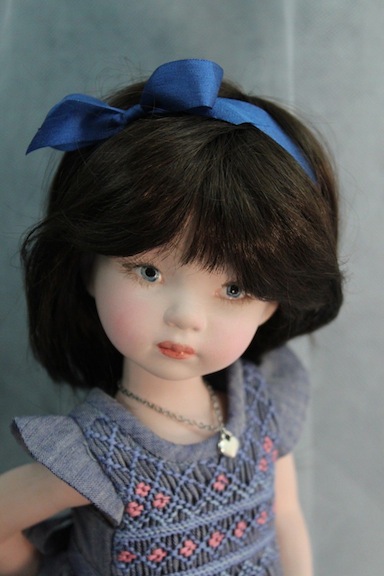 Brenda Mize, the artist behind Eyes of Texas Dolls, has been making lovely one-of-a-kind and limited-edition beauties since 2015. Primarily lauded for her work with Dianna Effner molds, Mize weaves her magic through her hand-painting and costuming. “Painting the eyes on these dolls is the most enjoyable part, and I look forward to seeing each doll come alive with their own distinctive and personal expression,” Mize explains. 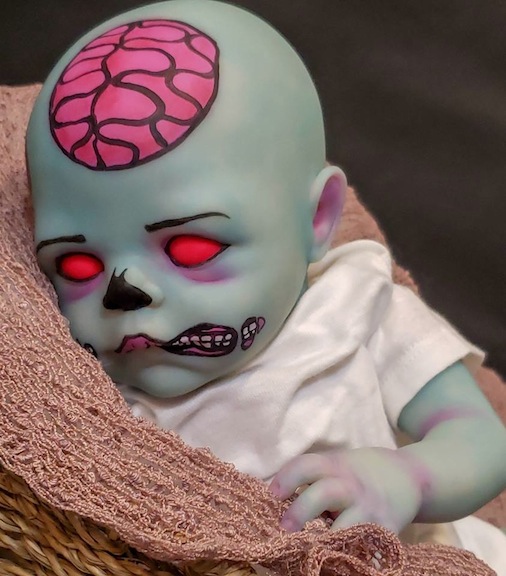 Jeni Razoux is the talented visionary behind the frightening and mind-bending dolls of Little Moon Nursery. If you’re like me, you see the term “little moon” and you have to think “scary-movie alert.” After you witness her array of babies — which even Rosemary might have rejected — you know these are supernatural stunners. “My dolls are a wonderful mixture of the macabre, fantasy, and realism. They are teasing the line between the fantasy world and realm of horror. I think it says, ‘I’m having fun!’” Razoux reveals.

The artist with a wicked sense of humor is the guardian of Little Moon Nursery since 2009. “It began as a place to debut my clay creations, and it has grown into much more,” she shares. “I think it flourishes because I’m having a good time and each creation is made with heart.” I believe that collectors would agree. Razoux’s dolls look as if they have stolen hearts and possibly other organs from midnight graveyard digs. They are truly shocking and awe-inspiring. 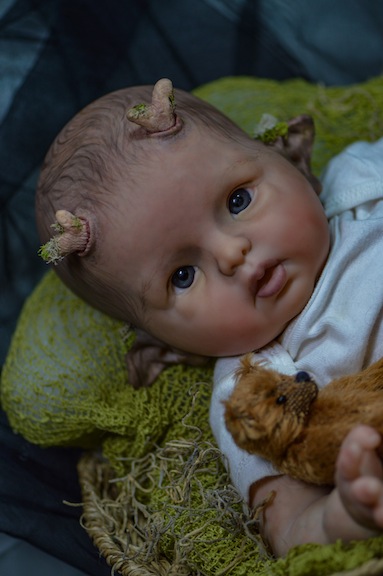 “I have many, many plans for lots of new dolls. I have new plans for reborning, and new plans for sculpting as well,” Razoux pledges. “I’m going to be pushing my own boundaries this year.” 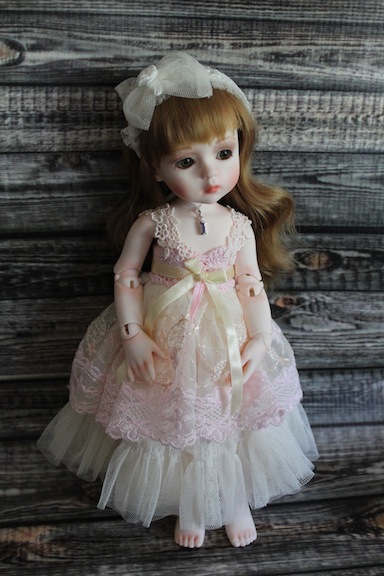 “I believe that doll collectors, young and old alike, never tire of adding to their collections,” Mize points out. “This is especially true with the endearing Dianna Effner face sculpts, as well as the new BJDs I’m using. I make dolls that make people happy, I hope.” 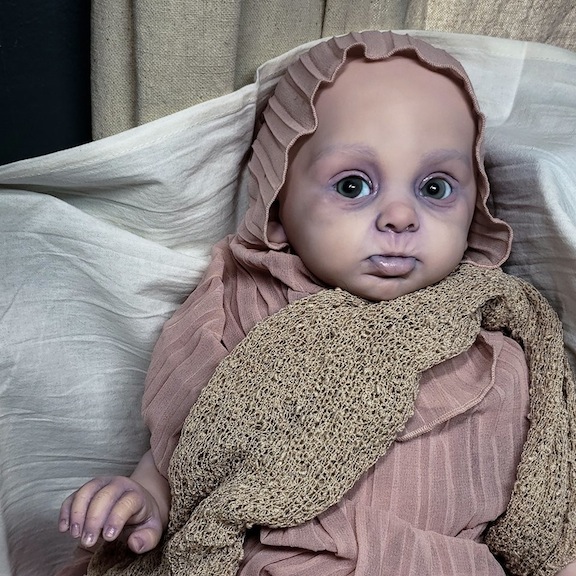 Ghost by Jeni Razoux is an eerie contemplation on re-imagining a doll kit. The ghostly doll stems from the Princess Adelaide kit by Andrea Arcello.

Jeni Razoux dreams up dolls to make people happy, too. Yes, I use the word “dream” loosely, but that’s because “nightmare” is not a verb. Razoux’s collectors are a dedicated bunch, and they adore the underbelly of pop culture. I would walk a mile for a sneak preview of the newest “Walking Dead” season, and that’s who comprises many of her fans. A lot of Razoux’s customers are folks who are dedicated horror-convention attendees and gore-fest goers. Her clientele likes to have a bloody good time, but they also have their caregiving side. Her dolls are physical examples of that tried-and-true expression “A face only a mother could love.” These are reborn baby dolls that are possessed, reincarnated, or re-animated. The stork didn’t bring these bundles of joy. Rather, they look as if they escaped from hell in a hand basket! 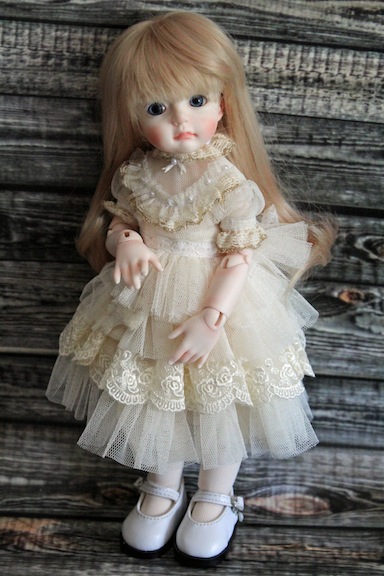 Another new BJD, Kristen, which has been customized by Brenda Mize.

Looking to the fall and the holiday season, Brenda Mize has big plans, too. “I will create outfits for my BJDs. I am going to apply my heirloom sewing techniques to create outfits and accessories for each new doll. Most definitely, I want to offer a wider variety of dolls for my collectors to choose from. If all proceeds as I have hoped, then I will introduce a set of limited-edition dolls each year.” 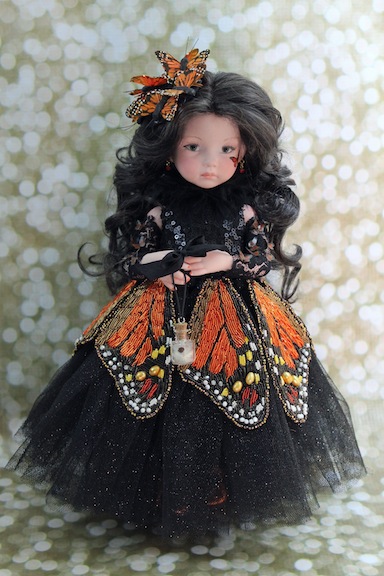 Chrysalis is an optimistic, upbeat version of fantasy, courtesy of Brenda Mize.

For 2019 and beyond, Brenda Mize aspires to create dolls that reflect childhood innocence and purity. When she focuses on fantasy, Mize designs dolls that are reflective of positive fairy godmothers and helpful fairies. Glinda the Good Witch, Casper the Friendly Ghost, and the Archie Comics version of Sabrina populate Mize’s world. Wholesome nostalgia rules the day. 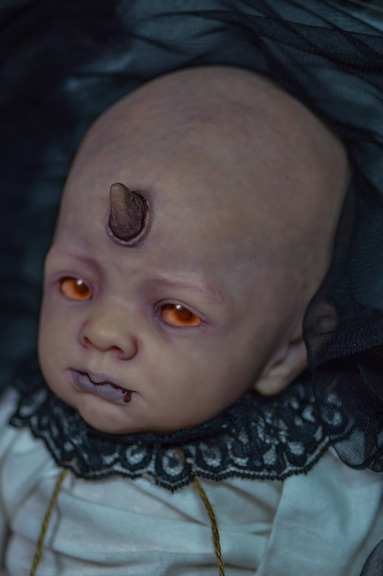 Close-up image of the Demicorn, which weighs 5 pounds and measures 19 inches.

Equally as devoted, but following a different path, Jeni Razoux is gearing up for a prolific new year. “My dolls are not what people expect when they think about a reborn doll. They can be human, but they also are primitives, mermaids, elves, fairies, and other supernatural characters. Each baby doll is created with love and precision. They are unique and certainly one-of-a-kind.” 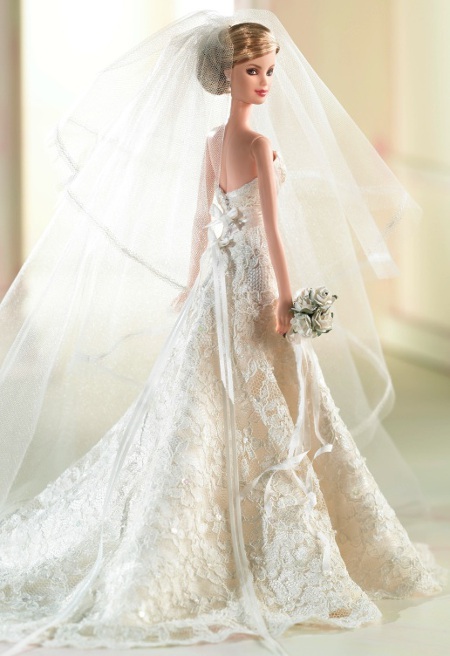 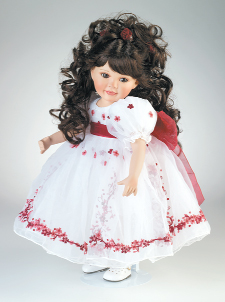