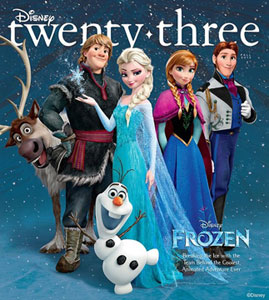 The characters of “Frozen” expand upon the beloved Hans Christian Andersen fairy tale “The Snow Queen.” Disney had a huge hit with the reinterpretation of Andersen’s “The Little Mermaid.” 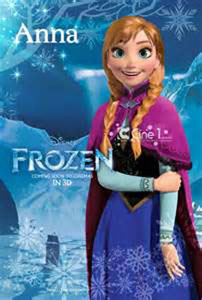 “Anna” is the feisty, open-minded, and brave heroine of “Frozen.” 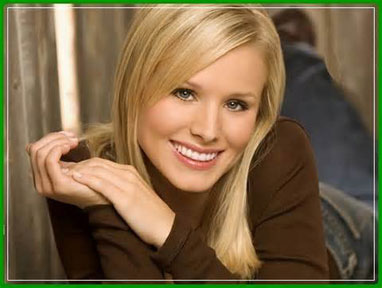 Know for playing a teen private eye, and for having an emotional meltdown over a real-life sloth, Kristen Bell voices the intrepid “Anna.” 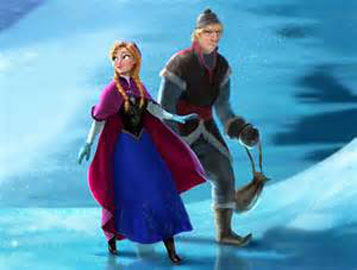 Accompanying “Anna” on her journey to find her runaway sister is a crusty curmudgeon who happens to be a handsome mountainman, “Kristoff.” 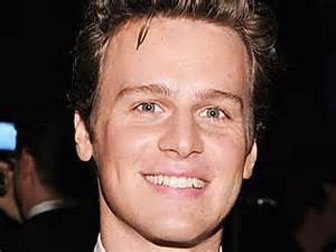 Jonathan Groff, who scored big on the hit show “Glee,” lends his talents to the role of “Kristoff.” 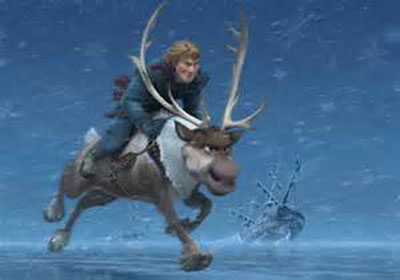 “Kristoff” has a silent sidekick who just happens to be a reindeer. “Sven” is described as having the heart and soul of a Labrador. The reindeer doesn’t speak in the film. 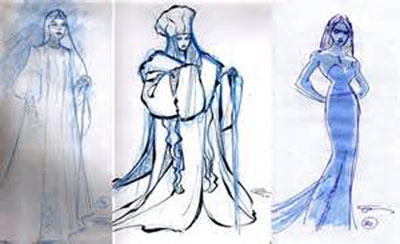 The “Snow Queen” went through a meticulous, painstaking design process by Disney animators. 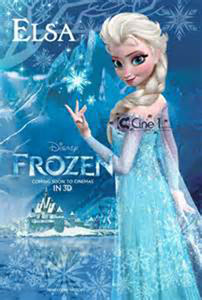 “Elsa” is the finished product of the designer’s intense labor. 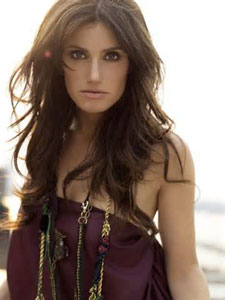 Known for her star-making turn in “Wicked” and for her recurring role on “Glee,” Idina Menzel is the voice of “Elsa”/”Snow Queen.” 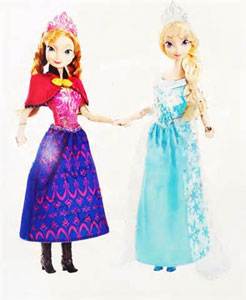 These are the possible prototypes for Mattel’s “Anna” and “Elsa” dolls. When they touch hands, they will duet. Preorder chatter also says their bodies might light up, and their dresses change color with a “magic” staff. 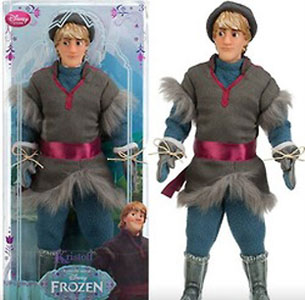 Fans are speculating that this is how the “Kristoff” doll for the Disney Store will look. 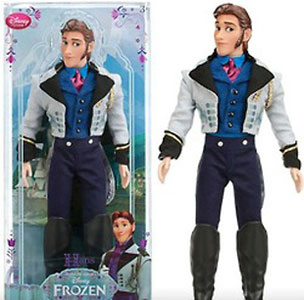 Again, rumors are swirling that this might be the “Prince Hans” doll. 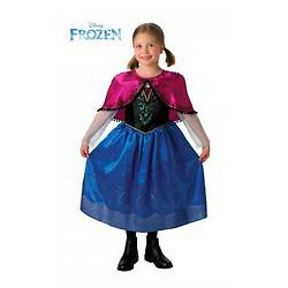 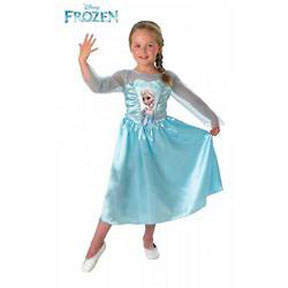 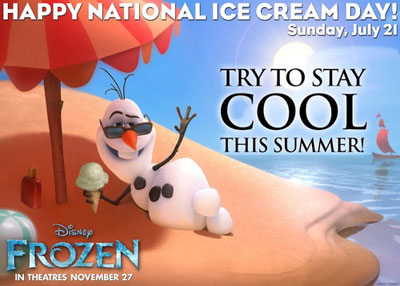 November is four months away. In the meantime, chill out, like “Olaf,” the comedic snowman, with a refreshing frozen treat.

While the United States is baking and boiling and broiling, it’s nice to take a voyage to cooler climes. I don’t have the cold, hard cash to book passage to Alaska, but I am already in a wintry wonderland in my mind. I am gearing up for the avalanche of publicity and tie-in collectibles that are going to be heading our way around Thanksgiving 2013. In November—if the publicists are correct—Disney Animation Studio will be unveiling their next hopeful blockbuster. This time around, it’s a film called “Frozen” and it is a musical/comedy/animated adventure flick inspired by Hans Christian Andersen’s “The Snow Queen.”

Slated to be the 53rd offering in the Animated Classics series, “Frozen” is going to be debuting with a lot of keen expectations and box-office watching. One way to see how successful a franchise is going to be is to clock the merchandise sales. For “Frozen,” there will be dolls, costumes, cosmetics, home furnishings, office supplies, toys, backpacks and lunch totes, and everything else that can be packaged and shrink-wrapped. There will be a lot riding on this venture, and Disney expects the film to have more than just its film-release shelf life. Home video and downloadable streaming will also be part of the mix. “Frozen” is going to be a full-on experiment in how a family movie can navigate and triumph in the brand-new social-media world.

For this attempt at thawing cynical folks’ cartoon aversions, there is a lineup of truly talented people in the mix. The voice talent for the flick features Kristen Bell (TV’s Veronica Mars), Idina Menzel (the original star of Broadway’s “Wicked” and a recurring guest star on “Glee”), Jonathan Groff (“Glee” and “Spring Awakening”), Josh Gad (“The Book of Mormon”), and Santino Fontana (Broadway’s “Cinderella”). The composers of the songs are husband-and-wife team Robert and Kristen Lopez. Robert was one of the driving forces behind the stage hits “Avenue Q” and “The Book of Mormon.”

Music is going to play a large part in the translation of the characters into tangible, collectible figures. Mattel has let it slip that they will be manufacturing fashion dolls of “Princess Anna” (the Kristen Bell character) and “Elsa” (the Idina Menzel portrayal). The dolls will be able to join hands; and when they do, they will duet together. It is similar to the ones that Mattel made for its own Barbie spectacle The Diamond Castle. There’s also prerelease chat the dolls’ bodies will light up, and their dresses will be able to change color when touched by a “magical” staff. That sounds very cool, indeed!

Additionally, the very successful line of classic heroines converted into toddler versions will be inviting “Anna” and “Elsa” into the vinyl fold. What’s particularly interesting about this development is that “Elsa” will be the first “bad guy”/villain done as a toddler! Even though she has royal roots—which normally means a sweet, joyful, friendly disposition—in “Frozen,” the character of “Elsa” leaves her home palace to create a cold, icy, evil world of her own. It’s fascinating to imagine how the nemesis of the piece will look when she’s given the big-eyed, heart-shaped toddler-doll face.

Pins, which are a staple now for the Disney collector, are being designed, molded, and made for release with the film. The Disney blogosphere is excited beyond belief for the arrival of all these accessories.

Photos have been floating around of what potential collectibles might look like. Folks have let slip what they think “Prince Hans” and mountainman “Kristoff” will be garbed as in their Disney Store packaging. These possible samples (shown in slideshow) are quite attractive and really capture the characters’ personalities.

Brace for more scuttlebutt and rumors regarding the release of the Snow Queen’s blue-frost necklace and ice scepter; pink tiara for “Anna,” and playsets that include all the human characters along with “Olaf the Snowman” and “Sven,” the reindeer with the heart of a Labrador!

In my home, we have a treasure-trove of Disney movies and paraphernalia. My kids are still young enough that they can request an evening of Disney films without apology or rationalization. They love everything—all incarnations from the 1937 classic “Snow White” to 2013’s “Wreck-It Ralph.” They really respond to the magic that Walt Disney knew how to inspire and produce.

“Frozen” is going to have its share of bumbling comedic moments, zany sidekick characters, and double the romance possibilities (remember there are two princesses and two potential suitors). I know that at my home we’re all eagerly awaiting the film and can’t wait to see if the evil snow queen “Elsa” gets redeemed or receives some pretty lethal retribution. (Think about Ursula’s comeuppance at the ship-steering hands of Prince Eric in “The Little Mermaid.”) Disney doesn’t shy away at having their nefarious evil-doers get thrust into the fiery pits of animated hell.

In a movie titled “Frozen,” it will be fun to see if the conclusion melts the hardened heart of “Elsa” or if she gets stowed away into icy suspended animation. Whichever way, I expect my kids will be requesting a second and third viewing.

Until then, I’m going to stay cool and have a frozen yogurt! (Or maybe even an ice-cream sundae. July 21 is National Ice-Cream Day, after all.)

Dollcasters: Is Network TV just a Few Segments Away from a Team of Vinyl Broadcasters?