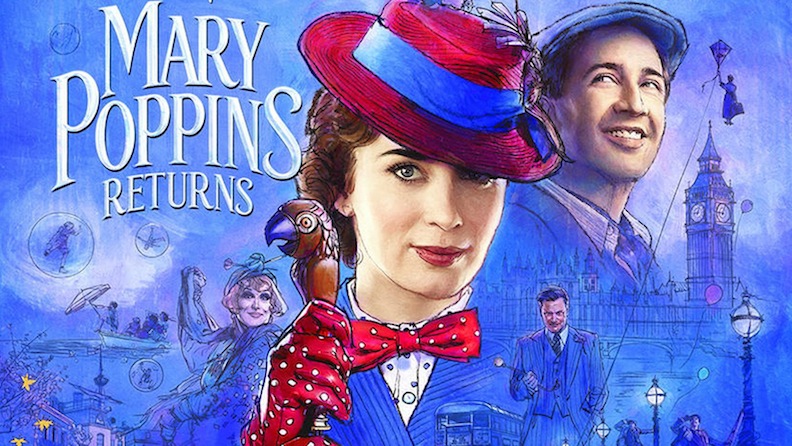 Usually, a sequel to a book or a movie counts on capturing the audience of the first installment. For that purpose, one can imagine a two- or four-year hiatus between original creation and then its follow-up. These days, sequels seem to take longer to come along — most likely, because films with all of their CGI and technology requirements are becoming longer and longer artistic processes. Even with movie franchises now taking a decade or two to wait for another episode to debut, the new “Mary Poppins Returns” is setting a record of sorts for a 54-year interlude between the original “Mary Poppins” (1964) and its soon-to-be-released part two (Dec. 19, 2018). 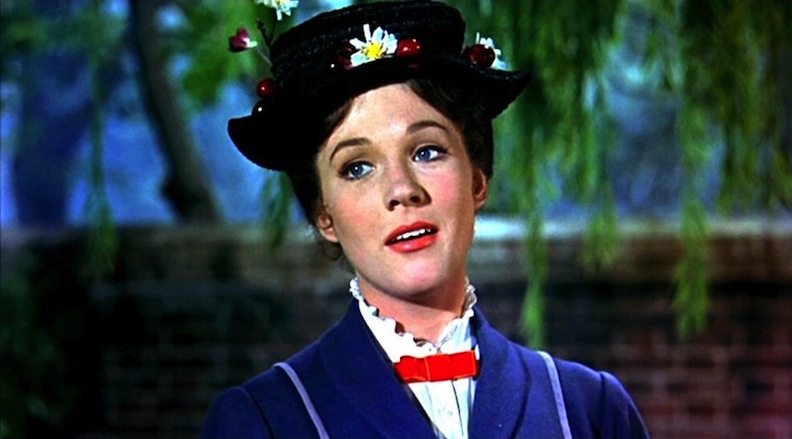 Julie Andrews as the original Mary Poppins, an Oscar winner for her debut role

Many of the adults who first went to see the Julie Andrews/Dick Van Dyke extravaganza are, statistically speaking, no longer with us. The grandparents who toddled off to see the Walt Disney musical with grandchildren in tow could very likely no longer be on this earth. And the tiny tots who were enchanted by an umbrella-flying, practically perfect nanny are now grandmas to their own broods of offsprings’ offsprings! Disney’s “Mary Poppins Returns,” therefore, is returning not so much to amuse a core audience of kindergartners to sixth graders, but rather to reignite the desire to head to the multiplex for family matriarchs and their descendants. 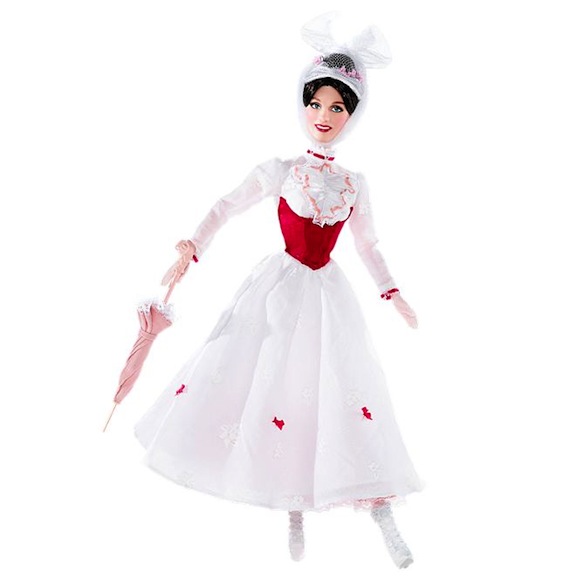 Mary Poppins portrait doll from Mattel, circa 2007, bears a resemblance to Andrews.

Mattel, which always has a first-rate relationship with Disney memorabilia, has a long and storied history with the original “Mary Poppins” film and now its long-delayed sequel. Back in 2007, the Mattel creative team saluted the legendary pairing of Julie Andrews and Dick Van Dyke with two dolls sculpted in their likenesses. The Mary doll has a familiar appearance that suggests Julie in her dark wig and governess apparel. The Bert doll is an absolute doppelganger for Van Dyke. It looks exactly like the beloved American comic. 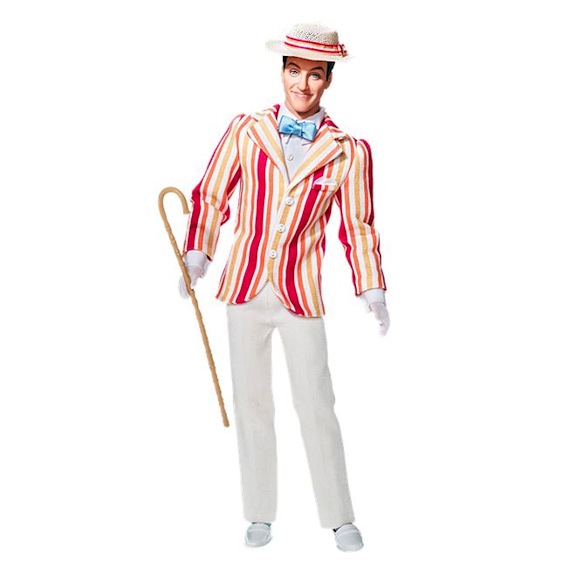 Nowadays, Dick Van Dyke is the elder statesman for family-friendly sitcoms from the 1960s and a symbol of high-stepping, boundless energy that couldn’t be contained on the screen. With his rubbery face and elastic legs, Van Dyke danced alongside cartoon characters in the 1964 movie. He was akin to a living, breathing animated figure himself. December’s “Mary Poppins Returns” will mark the return of Dick Van Dyke to the big screen in the role of Mr. Dawes Jr., a banking executive who is the son of the curmudgeonly Mr. Dawes Sr. (Van Dyke also played the senior Dawes in the original film.)

Julie Andrews was asked to make a cameo appearance in “Mary Poppins Returns,” but she declined. According to her representative: “Ms. Andrews does not want to step on Emily Blunt’s toes. She wants this to be her moment in the spotlight.” The movie “Mary Poppins” was very good to Julie Andrews; she won her only Academy Award for this role, which was her film debut. The new Mary Poppins is British actress Emily Blunt, who is a veteran of stage, film, and TV. Blunt will be sharing screen time with the Broadway superstar Lin-Manuel Miranda. The creator of “Hamilton” and songwriter for Disney’s popular “Moana” is playing Jack the Lamplighter. His character is described as providing light to Cherry Tree Lane and bringing life to all he meets. 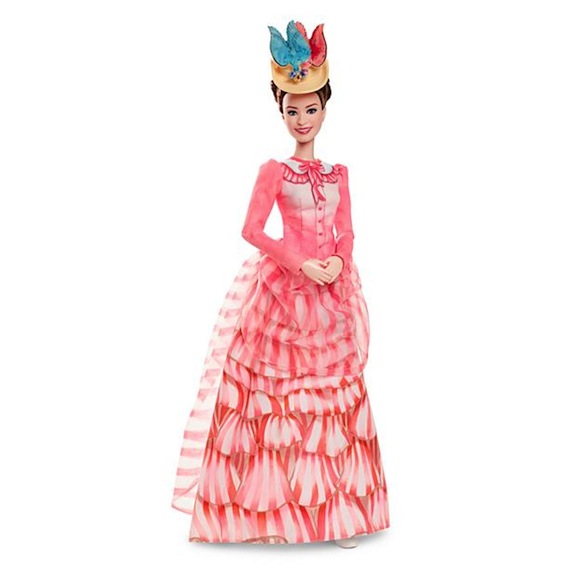 The “Grand Music Hall” doll is a portrait of Emily Blunt, the star of “Mary Poppins Returns.”

The new “Mary Poppins Returns” is set in 1930, a full 20 years after the original’s Edwardian setting (“1910, the age of men,” as one of Mr. Banks’s lyrics goes). Two decades after the first installment’s backdrop means there’s a lot of magic in the air. Michael Banks is now a grown man and the father of three children. Jane is an adult, too, and I presume unmarried. (She is still listed as Jane Banks in the credits.) Remarkably, Emily Blunt is 35 years old, and her two now-grown charges Michael (Ben Wishaw, aged 38) and Jane (Emily Mortimer, 46 years old) have become older than the current Mary. In some kind of Albert Einstein twist of time and relativity, 2018’s Mary Poppins is three years younger than Michael and 11 years younger than Jane. I imagine I shouldn’t be surprised, since Mary Poppins was never an ordinary nursemaid. Why shouldn’t she defy the laws of aging? She and her trusty parasol always flaunted the rules of gravity. 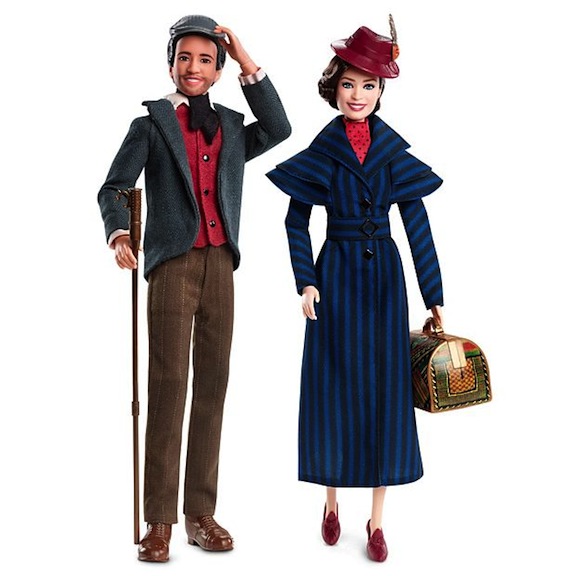 The duo of Mary and Jack arrives in this “Mary Poppins Returns” doll set.

The “Mary Poppins Returns” dolls are lovely portrait tributes to Emily Blunt and Lin-Manuel Miranda. At present, I haven’t seen any other dolls based on characters from the huge movie cast. Supporting players include Meryl Streep as Cousin Topsy, Colin Firth as the president of the Fidelity Fiduciary Bank (perhaps a love interest for Jane?), and Angela Lansbury as the Balloon Lady. (I imagine this is 2018’s stand-in for the emotional Bird Lady of 1964. It would have been nice if Julie Andrews had tackled this part.) 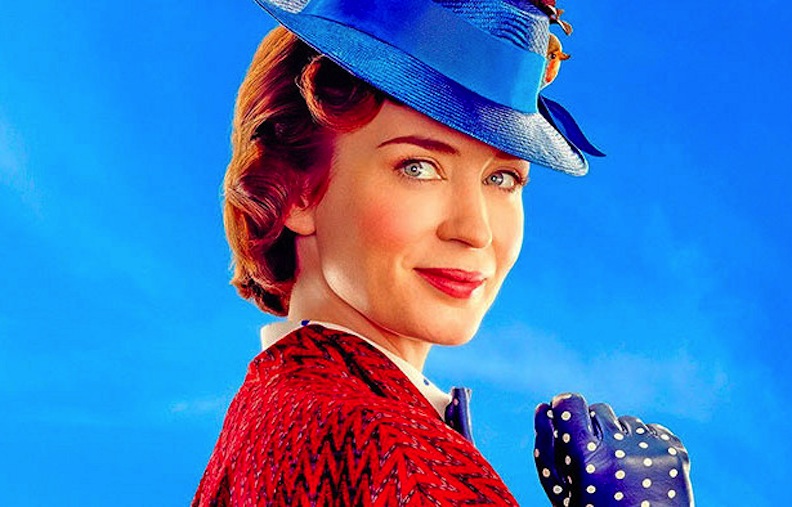 Boasting a musical score by Broadway duo Marc Shaiman and Scott Wittman (“Hairspray,” “Catch Me If You Can”), “Mary Poppins Returns” is directed by Oscar winner Rob Marshall. It took six months to film in England, at Shepperton Studios, finishing up in July 2017. Since then, it has been in post-production, getting its animation tweaked and refined. Miranda described his half a year on the project as a “highlight of his career. I got to dance every day with Emily Blunt and live out this incredible, magical dream.” 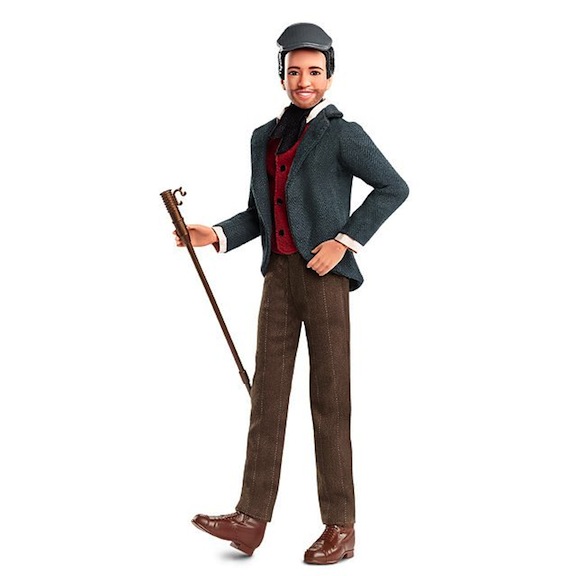 Lin-Manuel Miranda as Jack the Lamplighter, the new consort in “Mary Poppins Returns”

Disney has been pulling out the stops in marketing the movie, inserting its new score into the reality competition “Dancing with the Stars” (ABC and Disney are two arms of the same corporate body) and rotating ads for it on ABC, the Disney Channel, and every other Disney/ABC affiliate. Movie watchers will be viewing the opening weekend box-office receipts for this holiday fare. Debuting a week before Christmas positions it as a great family outing for the long holiday break. It will be fascinating to see how “Mary Poppins Returns” flies with contemporary filmgoers. And also to watch the sales for the dolls: Will they sell out, or will they be steeply discounted? Will a live-action family musical top the box-office results for Christmas, or will Lin-Manuel Miranda get his own shot at film gold when “Hamilton” finally makes it to the silver screen?