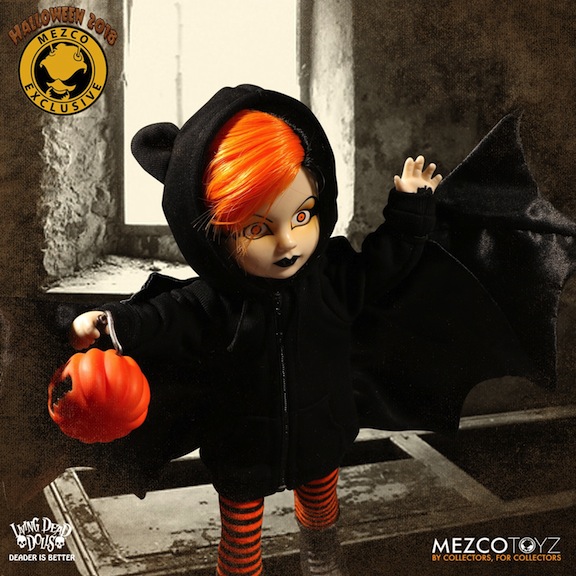 For Halloween 2018, Mezco Toyz has Vesper, whose name is Latin for “evening.”

There’s a type of comedy that’s called black humor or gallows humor. It consists of jokes that are pretty uncomfortable and downright ugly on the surface. Beneath the veil of awfulness lurks laughter that is rooted in fright and discomfort. Given the right circumstances, and the right storyteller, I can guffaw with the best of them when it comes to macabre anecdotes. If it’s told well enough, even the most cringe-worthy punch line can induce a chortle. The design team at Mezco Toyz understands that parallel of nervous laughter with good old-fashioned screaming. They create dolls that embody being “scared silly.” 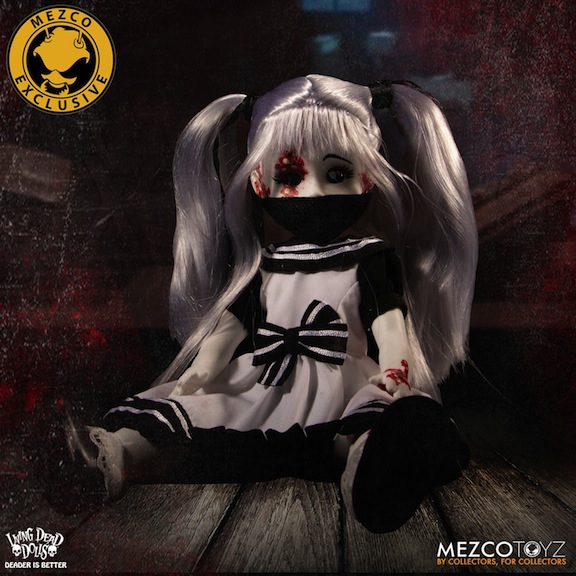 Maggot is a Living Dead Doll that is flesh-eaten and fashionable.

Some of the Mezco Toyz are spot-on portraits of famous Hollywood horror stars. They excel at making replicas of cinema’s scariest villains and mega-maniacs. Mezco has been around for many decades now, and 2018 marks the 20th anniversary of their Living Dead Dolls franchise. If anyone has read my blogs over the past decade, you know that I love my zombies. Prior to the last three seasons, I considered “The Walking Dead” to be the greatest show on TV. (Sadly, it jumped the shark when it introduced a comic-book king and a CGI tiger. Sorry, Rick Grimes.) But even with that downturn in my affections, I still do adore a good resurrection plot line. 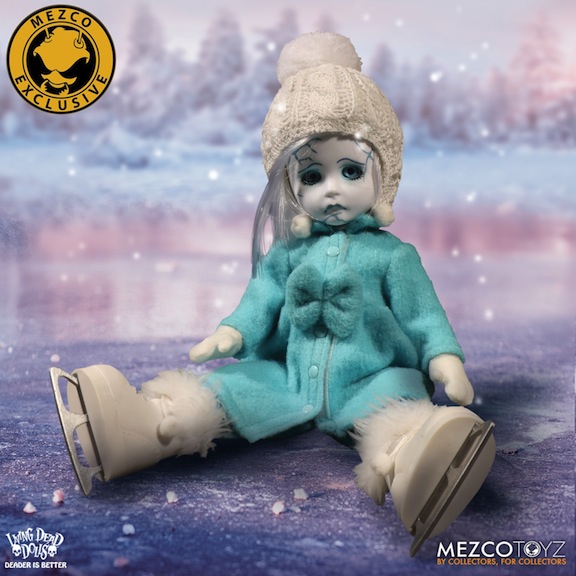 Little Charlotte plunged to her death while doing Figure-Eights on a pond. Now, she is stuck as Frozen Charlotte forever more.

The Living Dead Dolls have been a consistent money-maker for Mezco Toyz, and the dolls offer the creative team a chance to dream up an array of ghoulish, ghostly gals. These are characters that met their ends in gruesome, unexpected ways. (Remember what I meant about gallows humor.) For instance, their kind of cute Charlotte doll was out ice-skating when she plunged through the frozen pond. Poor little girl! She is now trapped in eternity as Frozen Charlotte, which is particularly “punny” for doll collectors, since a Frozen Charlotte is the name of a porcelain doll that is frozen into one position. You just have to appreciate a company that can make that outlandish connection. 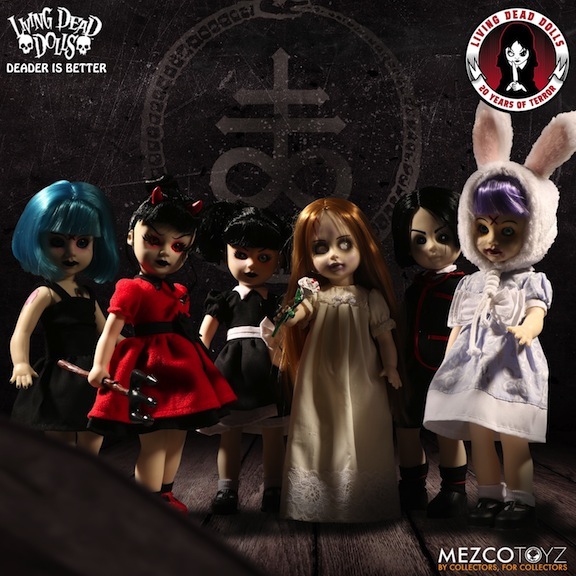 The 20th-anniversary lineup of Living Dead Dolls from Mezco Toyz

In honor of their 20 years of unleashing Living Dead Dolls, Mezco Toyz has brought back to life five fan favorites, and a sixth doll that is a variation on their popular Candy Rotten creation. The six dolls are Posey, Damien, Sin, Sadie, Eggzorcist, and Candy Rotten, with bright blue hair. Each doll is 10 inches tall and comes in its own unique coffin box, with death certificate. It’s a very funny yet frightening packaging concept. 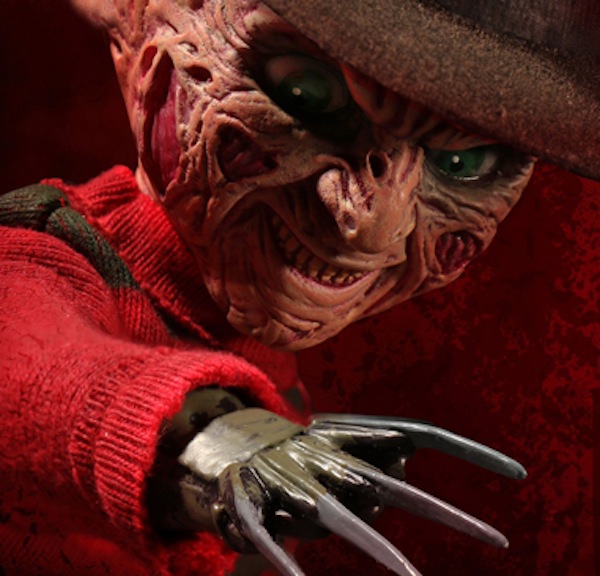 Probably Freddy Krueger ranks as one of Hollywood’s most terrifying creations! Mezco Toyz honors him with a wicked likeness.

The ladies, and one lad, who lunch on bad behavior and clueless human victims, still manage to be charming. Yes, I said it. I admit it. Beneath their bloodstained costuming or hollow-eyed stares, I see a Madame Alexander doll that is just desperate for love. The Mezco Toyz dolls are like Alexander’s lineup that somehow took a wrong turn and ended up getting lost in a Transylvanian forest. Picture poor little Wendy or Billy from Madame Alexander meeting up with a vampire and becoming stuck in a perennial horror film. That’s how I perceive the Mezco creations. They could’ve been good, but they’ve been dragged off the straight and narrow path! 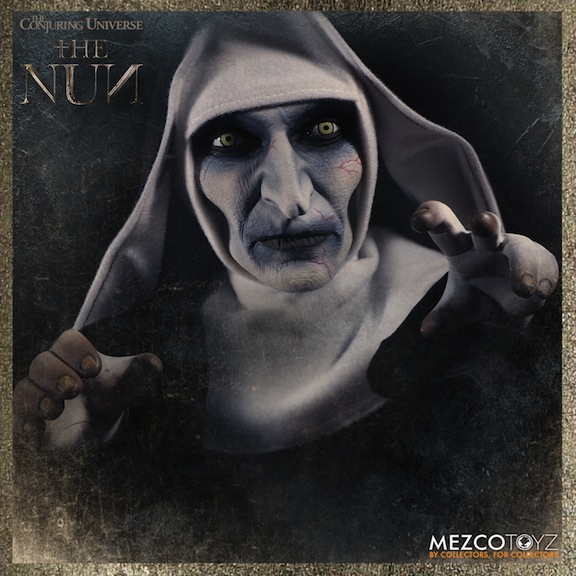 Occasionally, there are those Mezco Toyz characters that are just plain terrifying — plain and simple. They aren’t redeemable and they’re not adorable. These dolls are deplorable. One of the things that Mezco promotes is the gender equality of evil. They make dolls that are male and female, and they share in their terrible, tragic ways. Mezco Toyz has had enormous success with their dolls based on “The Conjuring” franchise. Their newest release is a depiction of The Nun, a character that began as a minor player in this film series and now has a movie of her own. 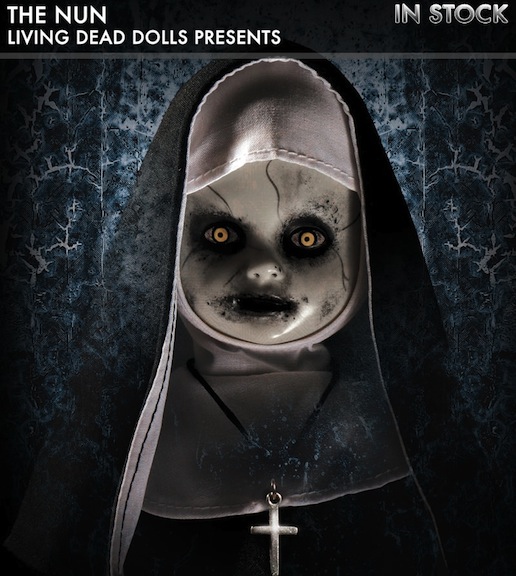 She’s deplorable but still adorable! The “sweeter” version of the scary nun doll.

Mezco Toyz has two versions of the spine-chilling nun. There is the smaller, sweeter version — that is, if you view Living Dead Dolls the way I do — and the official 18-inch movie-character rendering. The Mezco doll makers have fashioned a doll that wears a replica of the character’s habit, including cowl, veil, and tunic. The Nun first appeared in “The Conjuring 2,” and she popped onto the screen as a malevolent and pernicious spirit. She engages in a battle with the character Lorraine Warren, who is a professional demonologist. The latest incarnation of the Nun, as a major horror player, hit movie theaters at the end of the summer into the early fall. 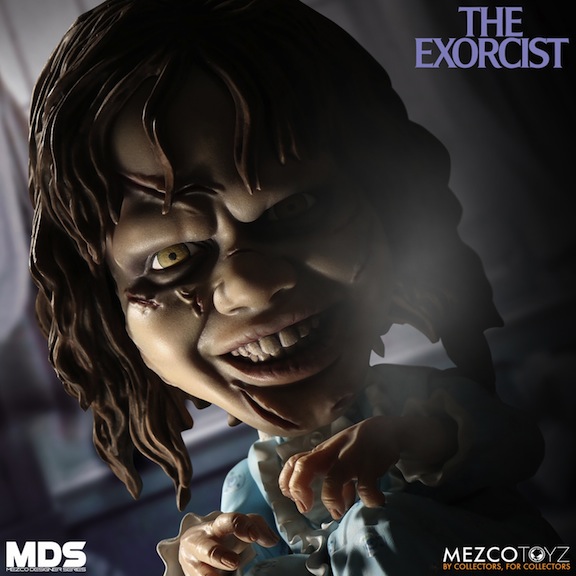 Linda Blair as Regan in “The Exorcist” was a pubescent child possessed by Satan. Mezco Toyz has a field day with her plight.

Beyond soul-grabbing nuns, and little tweens who are possessed by the devil, Mezco Toyz also meticulously sculpts the men who have made movie audiences shriek in terror and delight. From campy characters like Chucky, a doll that doesn’t play nice, to the silent and vengeful Michael Myers, who menaces with his mere presence, there are male dolls that are absolutely horrible and heinous. 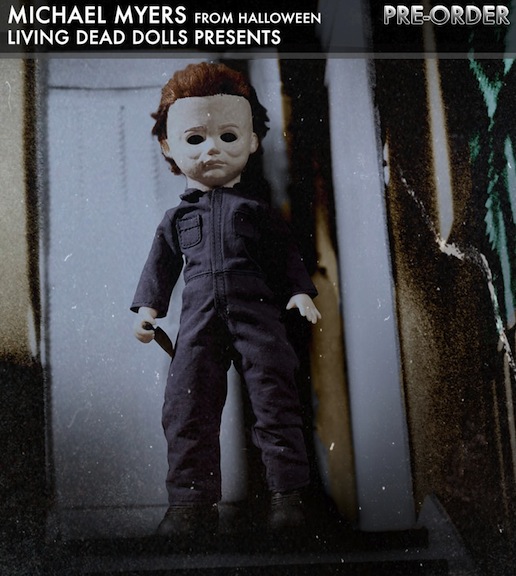 Michael Myers is a Mezco Toyz salute to the strong, silent type of killer. He is the evil soul of the “Halloween” movie blockbuster series.

Among some of the baddies that are so bad that they are good, Mezco Toyz has unveiled a very intimidating and disturbing portrait of Pennywise, the clown that terrorizes and haunts the Stephen King-based movie series and TV miniseries. Pennywise is a Mezco doll that doesn’t just appear off-kilter; he also speaks “six nightmare-inducing phrases.” Clowns are frightening; popular culture has sunk its teeth into that concept for at least 20 years. 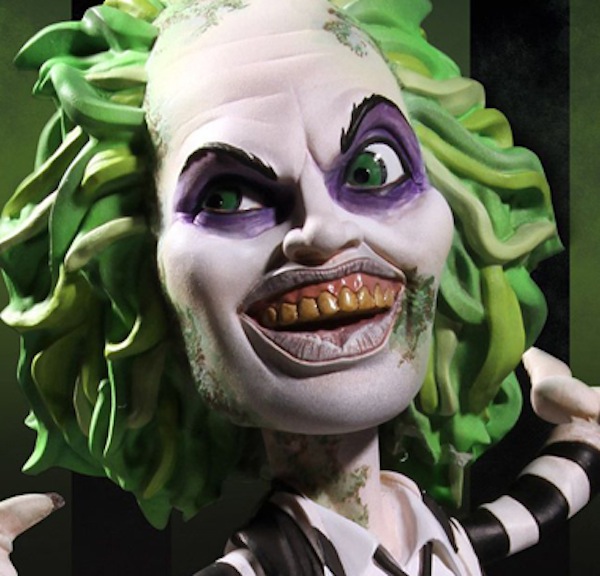 “Beetlejuice” was a successful horror comedy and will be a Broadway musical in the spring. Its main character, though, is spiteful and dangerous.

It is particularly noticeable in TV’s “American Horror Story” anthology series. Quite honestly, its Twisty the Clown is one of the most disturbing creations I’ve ever seen put on film. It is just a vengeful and hideous character. Unlike Beetlejuice, a charismatic personality that can’t fade, even in death, Twisty is a silent and somber specter. I wonder if Mezco Toyz will ever do a portrait of him? 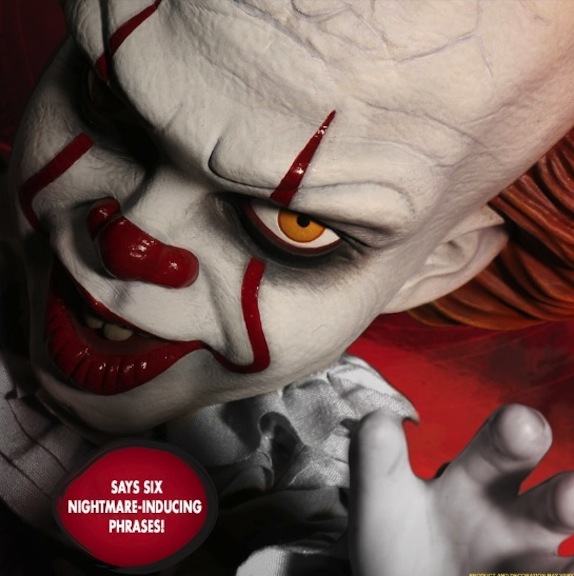 Pennywise is the menacing clown that has made “It” a go-to vehicle for horror.

That is what’s so fun about having a horrorvese — a universe that is populated by shape-shifters, poltergeist, ghosts and goblins, witches and warlocks, devils and the exorcists that can slay them. It’s a chance to confront the terrors that inhabit the nighttime — a chance to stare down and come face-to-face with the monsters that lurk beneath our beds or in our wardrobes. If we all do indeed have private demons and private fears, then Mezco Toyz helps to make the skeletons in our closets collectible and tangible. 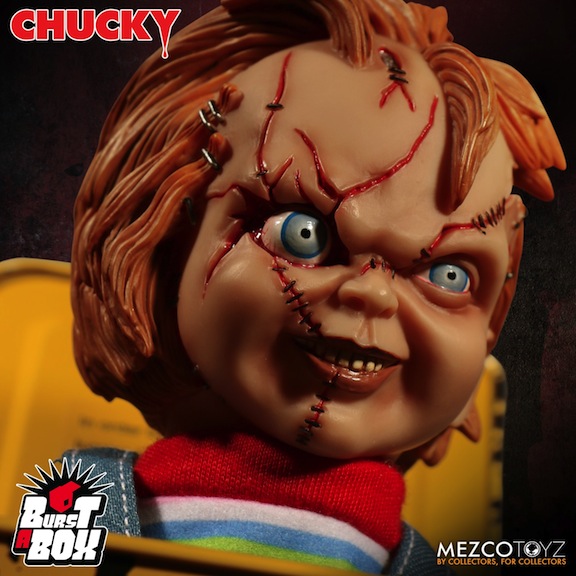 The king of all demonic dolls! Chucky is a doll that doesn’t play by the rules.

Halloween, which has stretched into a month-long celebration, is that time of year when we can dress up, decorate our homes, and let our anxieties and phobias see the light of day. It’s a single 24-hour period, but Mezco Toys acknowledges that horror has a home in our subconscious 365 days a year. 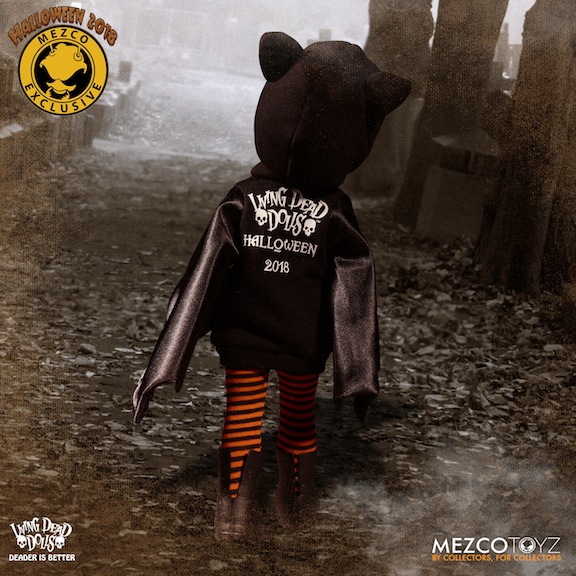 The Living Dead Dolls are the perfect treat for Halloween tricksters.

Happy Halloween from the Doll Chronicles and Mezco Toyz! Hope your trick-or-treating makes all your darkest dreams come true!