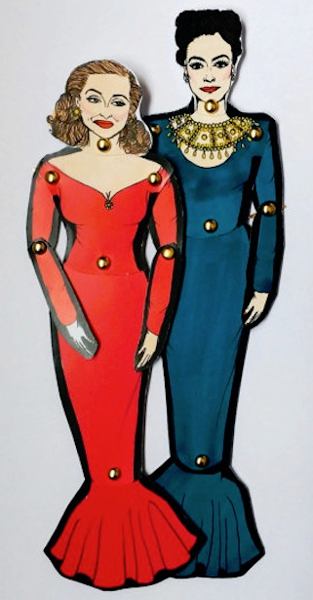 It makes perfect sense — well, to me at least — that two people who have an enormous amount in common might not get along at all. Religious scholars, therapists, and candid authors all point out how many of us are blind to the great big hunk of lumber sticking out of our own eyes, but we can eagerly point toward the speck of dust inhabiting our neighbor’s vision. We’re often willfully blind to our own faults, but we can recognize them from a mile away when they are presented in a stranger’s bearing. This foible of human nature occupies the front seat of this week’s DOLL CHRONICLES. It is, in fact, the essence of why these two iconic grande dames are intertwined and interlinked. They are eternally bound together — and more and more frequently made as tribute dolls together. They are united in their ferocious animosity. 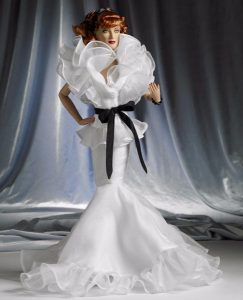 Robert Tonner’s take on Joan Crawford as a Hollywood Starlet.

Both of these women personify the pinnacles and the pitfalls of Tinseltown. For every meteoric rise to fame, there is an accompanying crash-and-burn in La La Land. Sometimes the descent happens quickly, but other times the rocket tends to ride high for a long while and then its pull back to earth is even more devastating and cruel. 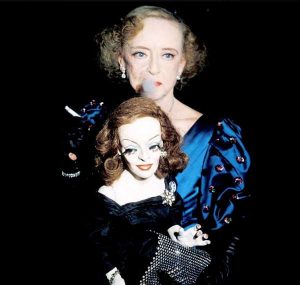 Bette Davis with a custom-made “mini me” version of herself. Photo courtesy of Movie Star News.

After the success of Ryan Murphy’s TV miniseries “Feud,” Bette Davis (seen above with a tribute doll) and Joan Crawford are hot once more. Though both leading ladies have departed for the Great Dressing Room in the Sky, their legends continue to flourish and grow. In fact, Crawford’s self-help/advice book has been reprinted to cash in on the television show’s success. Available in paperback and for Kindle, her etiquette book, “My Way of Life,” can be read once more. Purchasers will learn how to host an intimate dinner party for 18, juggle work with romance, and, most importantly, tips for raising grateful and polite children! (Well, Joan got that one wrong, as we now know.) 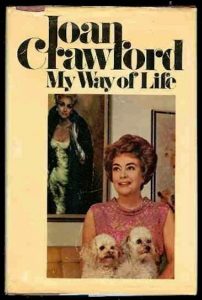 The cover of the original 1971 tome where Crawford shares her wit and wisdom, courtesy of Simon & Schuster.

But before she became known as the flawed Mommie Dearest and, way before that, as “the most beautiful girl in the world” — yep, young Joan was saddled with that soubriquet when she first began to act in silent movies — the enduring movie star was once a little girl named Lucille LeSueur. (Her detractors would mock her birth surname by pronouncing it as Le Sewer.) Growing up in Texas, she had a rough-and-tumble upbringing, and felt marginalized from her mother. She admitted that one of her areas of escaping was to imagine a future, fabulous life, and she’d whisper her plans to her beloved doll companions. 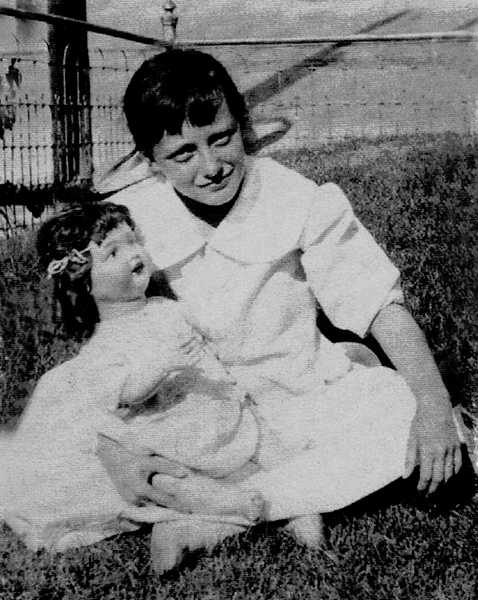 For all her onscreen bravado and swagger, Crawford was incredibly insecure in real life. She was dependent on the affection and approbation of the public. It makes sense. Her whole identity — the domineering and stoic Joan Crawford — came about from producers telling her which roles to accept and which to decline. Her acting name came courtesy of a movie-magazine readers poll. Lucille LeSueur became Joan Crawford, thanks to the moviegoers of America. 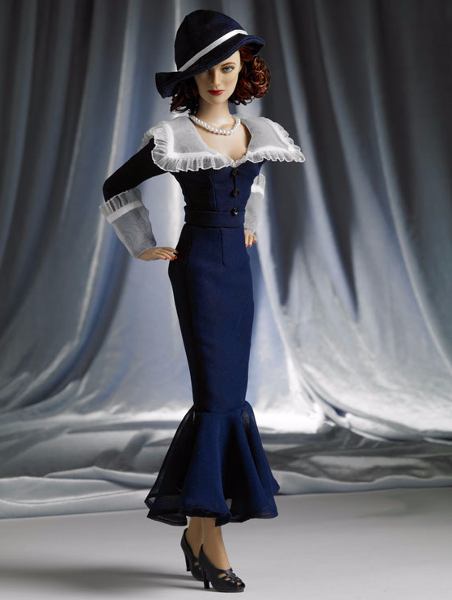 Bette Davis, likewise, had her own set of demons/anxieties. However, the New England native was classically trained, and had an affinity for stagecraft. Whereas Joan Crawford excelled in inhabiting a role as Joan Crawford, a recognizable commodity, Bette Davis could crawl inside any part and lose herself completely. From Elizabethan royalty to mousy spinsters, proud Southern belles to self-sacrificing Welsh tutors, Davis grabbed all the best parts and devoured them. 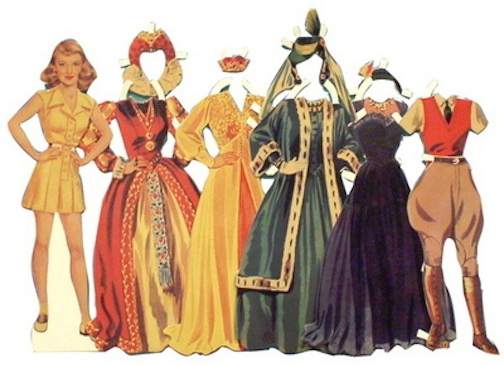 Die-cut Davis paper dolls, originally made in 1942 by Merrill, and re-created on Paper Doll Review.

When these two forces of nature met, obviously the result was explosive. “Feud” chronicles their cinematic partnership, where the two onetime blockbuster giants were united to make a supposed B horror film. Having two Oscar-winning women in the leads should have elevated it to an A-status endeavor, but the studio heads saw it strictly as a cash cow that would spit out money from a public eager to see two “old dames” looking their worst. (Interesting note: Davis was 53 and Crawford was 58 when they made “What Ever Happened to Baby Jane?” Nowadays, women would be highly offended if they were termed ancient and expired at that age! Back in 1962, no apologies were offered. They were paired to create a new thread of ghoulish films: “hag horror.” Unbelievable!) 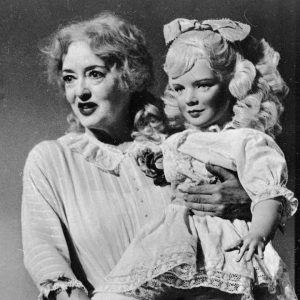 Davis as Baby Jane Hudson, the faded child vaudevillian star, posing with the doll made in her youthful likeness.

What the series “Feud” makes very clear — and I urge you to catch it on demand, on Amazon Prime, via other streaming services, if you missed it — is that these two actresses who once ruled the studio system were never really in charge. Despite their trappings of wealth, power, and glamour, both women were always the pawns of whoever was cutting the checks and bankrolling their projects. Even though Joan Crawford discovered the vehicle and suggested it as a comeback for her and Davis, she is treated as a mere hired hand by the film’s director Robert Aldrich and the head honcho, movie mogul Jack Warner. 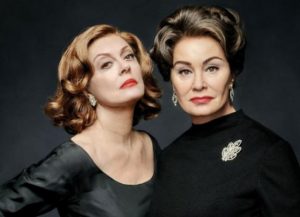 Sarandon, age 70, and Lange, age 68, as Davis and Crawford. Photo courtesy of IMAGE Magazine and FX.

Susan Sarandon as Bette Davis and Jessica Lange as Joan Crawford pull out all the stops to humanize these celluloid creations. While Faye Dunaway played Joan as the mother of all monsters, Lange portrays Crawford as a working woman who never really learned how to balance her career with her kids, her public identity with her private reality. She is shown with her youngest adopted twin daughters, and it is clear that she adores them, but she is also desperate to be adored. Her connection to her housemaid/right-hand woman is akin to a fledgling young woman trying to curry favor from a stern matriarch. Furthering that connection is the fact that Crawford called her loyal maid “Mamacita,” even though the housekeeper hailed from Germany. When they traveled, Crawford even allowed people to think that Mamacita was her mother. (Details about how the two came to meet, and why a Teutonic elderly woman was given a Spanish nickname, is shared in “My Way of Life.”)

The miniseries “Feud” is worth watching for film lovers, feminists, and doll collectors. It showcases how two strong-willed women could have become the best of friends — great allies and comrades to one another — but instead they permitted their venal, petty failings to determine how they viewed one another and reacted to each other. The two icons do not behave as divas. Rather, they are mere puppets for Jack Warner and Bob Aldrich. They have their strings pulled and are marched around the set like a bratty girl manhandling her playthings. How tragic that the two luminaries could have found a sympathetic soul mate in one another. Instead, they were baited and became bitter enemies, while still managing to crank out a movie that has become the standard for intense suspense and sibling rivalry. 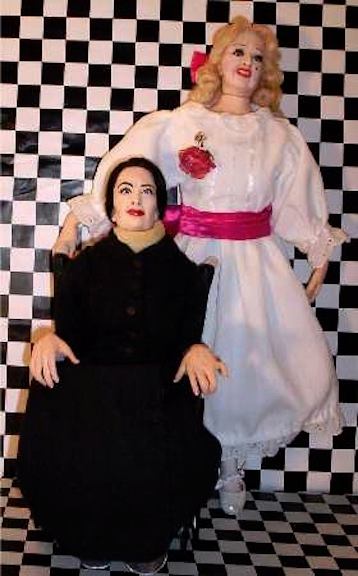 The same way that Baby Jane Hudson laments at the film’s end how she and her sister Blanche could have been such good friends the whole time; so, too, Davis and Crawford could have become frequent co-stars and even producing partners. Instead, their hostility was nurtured and the flames of their antagonism were fanned. As a result, their discord has become folkloric and larger than life. Such a sad ending for the little girl from Texas and the young thespian from Massachusetts, and “Feud” drives that point home. 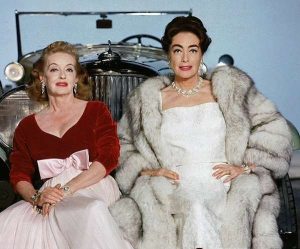 Bette and Joan pose for a “What Ever Happened to Baby Jane?” PR shoot.