I Spy with Doll Eyes

Just this week, the saga of Civil War smugglers “Lucy Ann” and “Nina” has been attracting a whole lot of bug. It seems that these innocuous ladies were being used as “mules,” back in the 1860s. Like the cocaine traffickers of today, who try to elude border agents and Interpol, these dainty girls were sent forward with instructions to appear innocent, and not get caught. They must have done their job quite well, because it’s only now—almost 150 years later—that these two femmes are being inspected by the Feds.

Who were these girls? And what were their missions? Lucy Ann and Nina are dolls that have been residing in the Museum of the Confederacy, and it is now rumored that their hollowed-out heads were used to smuggle medical supplies to the South, avoiding the prying eyes and hands of Union soldiers and inspectors.

To prove if their heads could have been used as storage cavities, the dolls were sent to the VCU Medical Center, and a series of X-rays were performed on the dolls. The conclusion 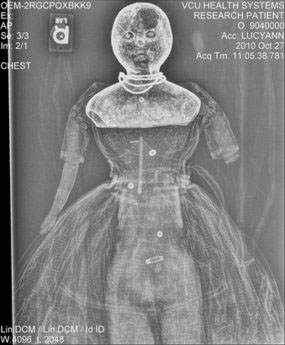 proves that the dolls did have the physical dimensions and depth for being medical mercenaries. The next step is a stopover at a forensics lab, where technicians will swab and run tests for trace evidence of quinine and morphine.

Many folks—pragmatists—say this is all a bit of drama and hype. They maintain that the papier-mâché heads are just typical of all dolls of that era; there is nothing special about these two creations to establish them as a make-believe Mata Hari or Anna Chapman. For people who tend to romanticize and dream big, these dolls are a gateway into bygone subterfuge and derring-do. It’s heady material, regardless of which way the “head” issue finally gets resolved.

Dolls as a means of hiding in plain sight is nothing new, and it’s been the stuff of legends and novels for many, many years.  The common wisdom is that dolls are so innocent and so pure (except for Chucky, of course) that no one would ever suspect them of nefarious activities. Poor fools! If you’ve read my past blogs (especially the last one, designed for Halloween Hi-Jinx), you know that dolls can be quite devilish and downright evil!

brought home in “Wait Until Dark,” a huge hit on Broadway and in the movies. In the film version, Audrey Hepburn played the poor damsel in distress, and her peril was worsened by the fact that she was blind and had to fight a cadre of drug dealers who were intent on getting back their stash. Where were the drugs tucked away? In a doll, of course.

Likewise, lovely British actress Emily Mortimer allowed herself to appear frazzled, terrified, and harried in the thriller “Transsiberian.” She and her co-star Woody Harrelson fall in with a bad crowd while riding that fabled Orient Express. They meet up with a pair of worldly thieves and drug pushers, who are transporting their latest score in—drumroll!—a Russian nesting doll. As you can imagine, being sequestered on a train with an illicit doll, a pair of cutthroats, and encountering a driven Ben Kingsley, who is determined to retrieve that doll, can be exhausting 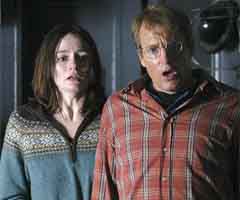 and intimidating. It gives the winsome Emily and her erstwhile Woody a run for their lives.

As a doll fancier, and a film lover, I adore these movies that focus on how dolls can play games with our conceptions and misconceptions about life and appearances. It’s always exhilarating to watch a master director and writer take a plot as old as the hills and give it an unexpected twist.

For my money, one of the most intense cat-and-mouse (and doll) games ever committed to film was 1955’s “ The Night of the Hunter,” directed by Charles Laughton. The classic featured Robert Mitchum as a bogus preacher from hell, who is hell-bent on getting his hands on a windfall of hidden cash from a robbery. The unrepentant villain knows that the ill-gotten gains are being harbored by a defenseless family: an easily manipulated widow (Shelley Winters) and her brave, self-reliant children.  He descends upon the clan and makes it his business to uncover that stolen loot—no matter what. What follows is a visually stunning morality play of love versus hate, good versus evil. And throughout all of this crisp, stark, brilliant black-and-white cinematography, Pearl’s doll sees all and knows all. Enjoy the trailer, and revel in a smart horror epic at its best. http://www.youtube.com/watch?v=e5AKK_om1VU