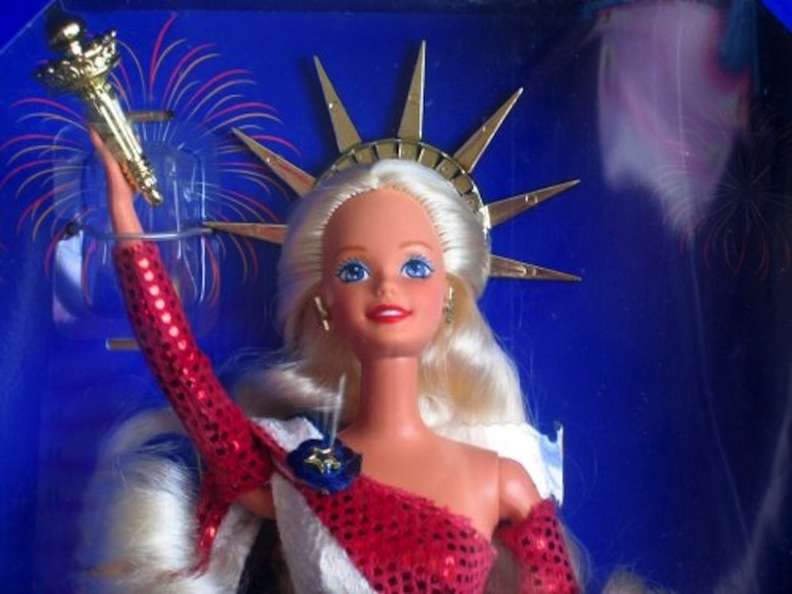 America is a young nation. Yes, we are 242 years old, as of July 4, 2018, but in the scope of globalism, we are still quite youthful and in our first blush of adolescence. That’s why it’s a lot of fun, and fitting this time of year, to think about the freedom that youth gives to all of us. (There are very few people under the age of 24 who worry about gum disease, broken bones, business bankruptcy, or job security!) Let’s face it: being young gives folks an armor against anxiety and fear. I know that I felt invincible in my 20s and participated in events—public and private—that I would never attempt today. So, trusty readers, get behind me in my rationalizing: youth equals independence; July 4 means Independence Day for Americans; Barbie is the very definition of American ingenuity and a perennial ingénue. 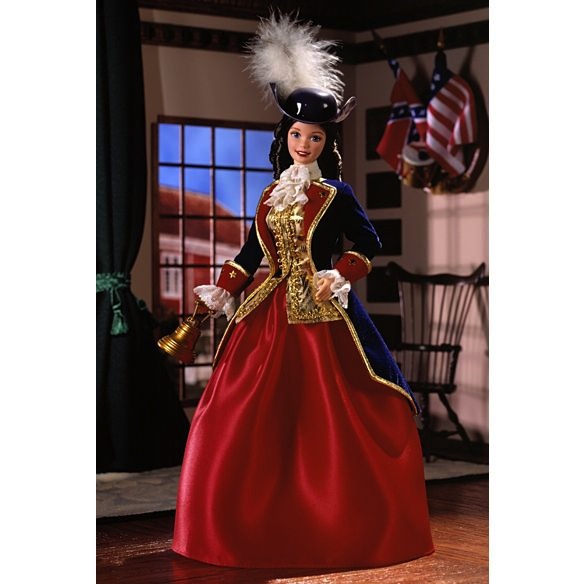 Released in 1997, the Barbie Patriot Doll came with a handheld golden liberty bell. Her accompanying book LIBERTY DREAM told about her life in 1776.

Though she’s not (yet) 242 years old, Barbie certainly doesn’t look anywhere near her 59 years. Gosh! Barbie is actually old enough to be a member of AARP! Let that soak in. Despite turning 60 in 2019, Barbie has always retained a post-teen silhouette, complexion, and stunning amount of hair. Her tresses never lose their luster or diminish in weight and scope. It’s interesting that in spite of her frozen-in-time appearance—Mattel really should release a Dorian Gray Barbie, complete with portrait that is deteriorating—Barbie does have quite a remarkable résumé of portraying historic and historical entities. She’s assumed the mantle of well-known Revolutionary War heroes (and America’s first president), intrepid patriots, brave colonists, and even a colossal statue that pays tribute to our land’s liberty, independent vision, and commitment to freedom. (It’s the Statue of Liberty, in case you haven’t puzzled that out!) 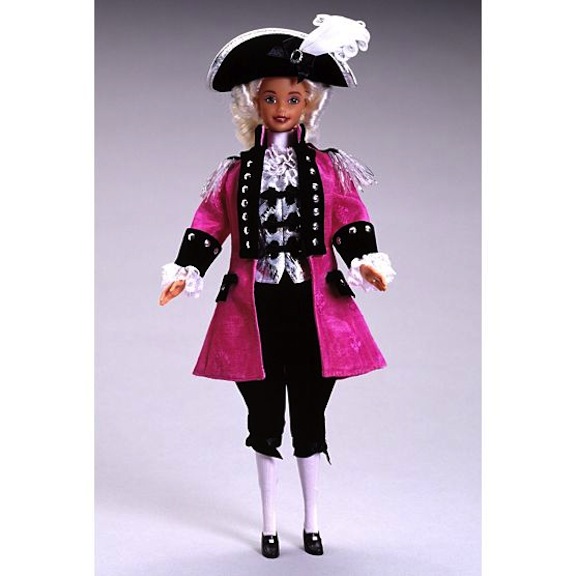 Barbie swaps gender roles and portrays the “Father of Our Country,” George Washington.

It’s kind of campy, but also sort of heartwarming, to think of Barbie as General/President George Washington. Though Barbie has run for political office many times during her career, her vinyl aspirations still remain out of reach in the real world. The U.S. has not had a female president—though historians agree that Edith Wilson pretty much ran the nation during her husband’s invalidism, from October 1919 to March 1921—so it’s inspirational to see Barbie in the guise of the beloved general. Washington was so popular and admired in his day that many of the patriots, who had just waged all-out war with England, wanted him to become “king.” They assumed that they would help to cast off the yoke of one monarchy and then set up their own more manageable one in the brand-new nation. Washington refused that honor and veneration. He didn’t want to be a demigod or a royal; he was quite content with being a leader of men, and one who knew when it was appropriate to walk away after two self-imposed term limits. (Everyone in Washington, DC, today should read a copy of his Farewell Address. It’s a primer on what a politician is meant to do, and, believe me, NONE of them are doing it!) 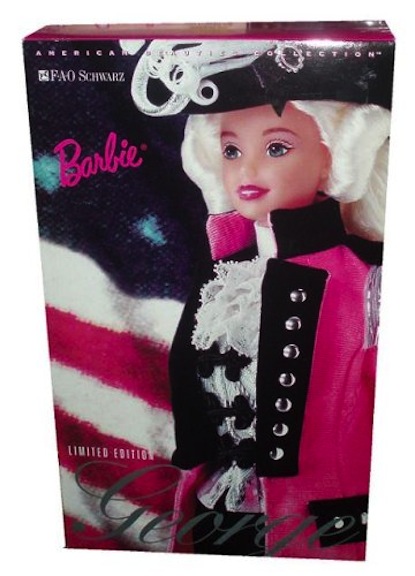 Designed by Ann Driskill, the Barbie as George Washington was the second release in FAO Schwarz’s American Beauties Collection. The doll was released in 1997, the bicentennial of Washington leaving the highest office of the land, bidding good-bye to the term “Mr. President,” and retiring to life at Mount Vernon. All of this happened in 1797, and the Mattel homage was a lovely way to memorialize it 200 years later. The first release in FAO Schwarz’s American Beauties line, however, was the 1996 rendering of Barbie as the Statue of Liberty. Created by Heather Dutton, the doll was a tie-in to the statue’s 110th anniversary. 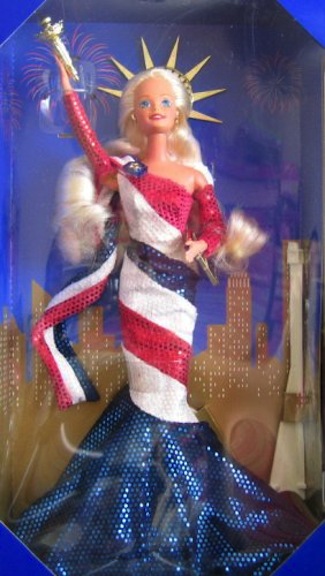 A gift from France (though “gift” is a debatable word choice, since the U.S. government and private citizens ended up having to pick up part of the tab for its completion), the Statue of Liberty was finally completed and dedicated on October 28, 1886. Begun in 1870, and interrupted due to France’s involvement in the Franco-Prussian War, and then the nation’s subsequent monetary troubles, the Statue of Liberty became a symbol of global cooperation and international “high concepts” that can come to fruition when everyone works toward a common goal. The commemoration and opening of the statue led to the first-ever ticker-tape parade held in New York City, and its presence in the Harbor has made it a recognizable symbol for tourists, sightseers, and immigrants. Now, often talked about as though the statue is a symbol of immigration, the Emma Lazarus poem “The New Colossus” on the statue’s pedestal, was not placed there until 1903. Its noble intentions and welcoming cry toward “your tired, your poor, your huddled masses yearning to breathe free” were NOT a part of Miss Liberty’s original design plan. 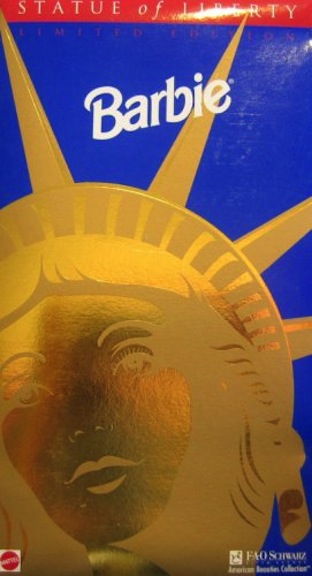 Two emblematic, undeniable symbols of America: the Statue of Liberty and Barbie

Lady Liberty was conceived by its architect, Frédéric Auguste Bartholdi, to be a slap in the face of European tyrants and dictators—the Napoleons and the other ilk that had ruled and ruined France and her neighbors. It was a huge, constructed testament to how the United States had continued to flourish under republicanism, not falling to the demagoguery of power-mad emperors and cultish rulers. Its torch was created to be a beacon of freedom, a physical representation of what America’s democratic government and free elections meant to the rest of the world. That intended ode to the United States as a beacon of equality, fraternity, and liberty has become secondary to the poem, which was actually commissioned as part of a fund-raising drive to help raise revenue for the base. 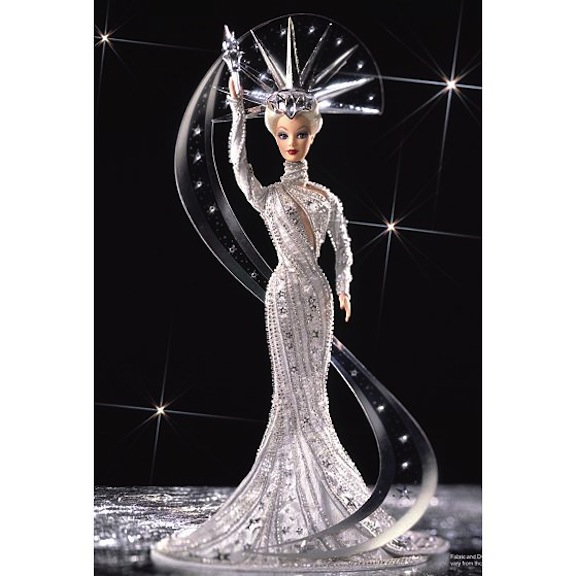 Take a gander at this! Bob Mackie’s opulent Lady Liberty Barbie doll. Debuting in 2000, it was a resplendent version of the statue.

Barbie has slid into the Statue of Liberty garb a trio of times. Her 1996 FAO Schwarz version, with its vibrant red-white-and-blue motif; the eye-popping 2000 Bob Mackie interpretation of Lady Liberty, replete with sparkling rhinestones and silvery pumps upon her feet. The Mackie version of the statue is defined by its heavy beading, stunning headpiece, and overall over-the-top feel. In 2010, Barbie donned a gown with the Statue of Liberty’s face emblazoned upon it as part of the Landmark Collection, a 30th-anniversary tribute to the Dolls of the World. In addition to the Statue of Liberty, there were also paeans to the Eiffel Tower and Big Ben. 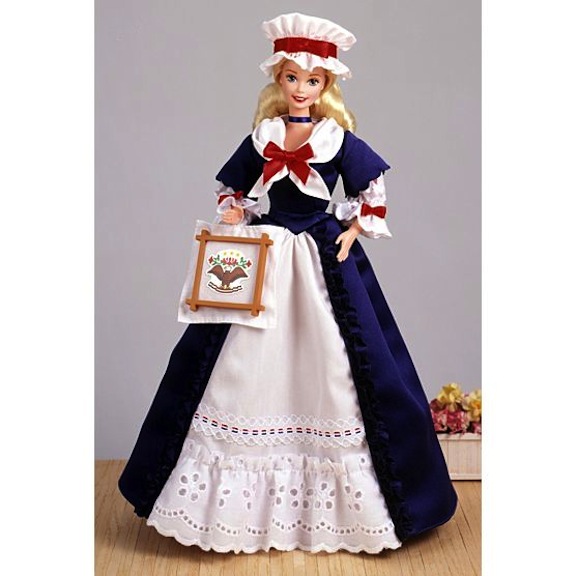 In 1995, Colonial Barbie put her seamstress spin on the founding of the nation. The Revolutionary War Barbie came with an embroidery square that contained a patriotic eagle design.

While we celebrate the 242nd birthday of our nation, and as citizens around the world watch democracy/republicanism in action, we know that Barbie and her team of Mattel designers are there as well. They are not just witnesses to current events and students of history, but they are also purveyors of transforming a onetime teenage fashion doll into all manner of American bravery, independence, feistiness, and—as always—costumed courage. Though the inhabitants of the Oval Office come and go, one thing always remains the same. Barbie is a symbol of American idealism and possibilities. And that never goes out of fashion … 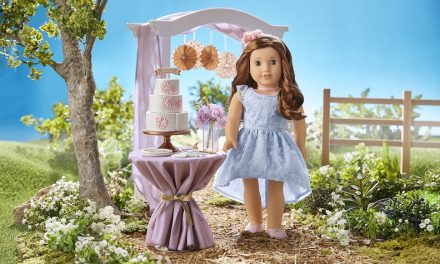 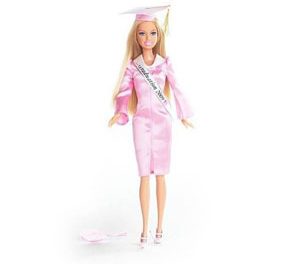