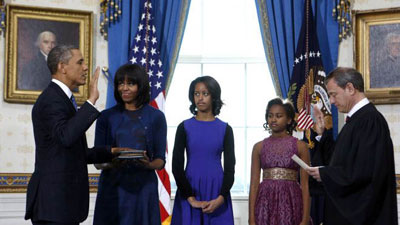 On January 20, 2013, President Barack Obama was sworn in, in the official ceremony held at the White House’s Blue Room. News reporters commented on how the Blue Room was a small-scaled setting, only a 40 x 30 office. That’s almost as big as my house! 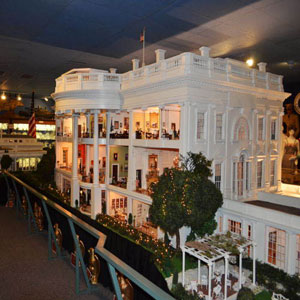 The White House has been made into a venerable doll house-sized replica. The stately abode has toured the United States over the past five decades. It is a meticulous mirror image of the actual presidential dwelling. 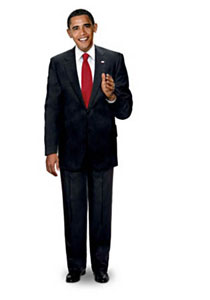 Ashton-Drake Galleries has a version of Obama on its website that is categorized as a “fashion doll.” Interesting use of words for a political maven. 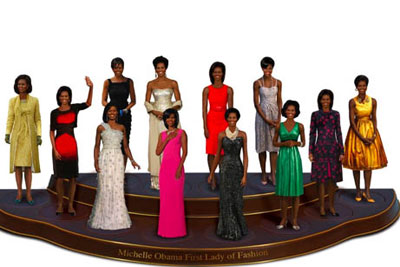 Michelle Obama has been compared to Jackie Kennedy for their shared sense of sartorial style. Danbury Mint offered this bevy of beautiful Michelle figurines. The sold-out set commemorated the many costume changes and appearances of the first lady. 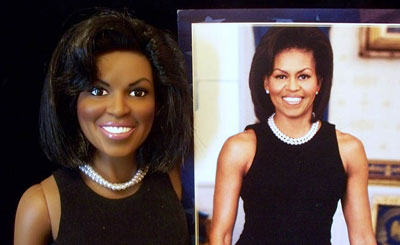 The Franklin Mint, which has been lauded for its treatment of icons, produced a stunning portrait of Michelle Obama. 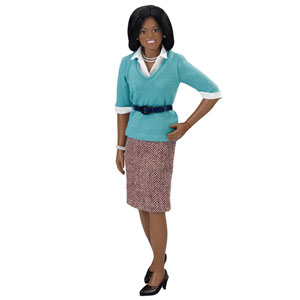 Even when she is garbed in more casual gear, Michelle makes the best-dressed lists. She has been deemed by VOGUE magazine as a “master of mix-n-match.” The Danbury Mint captured her likeness in this everyday outfit, which she sported in honor of February’s “Black History Month.” 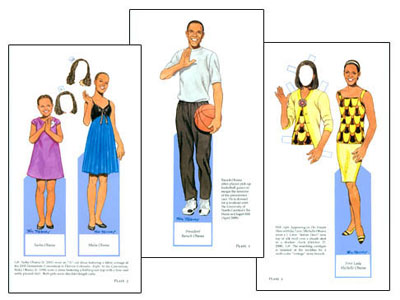 Paper doll artist Tom Tierney rendered the whole Obama family as forward-thinking fashionistas in one of his paper-doll tomes. As usual, the results were stellar. 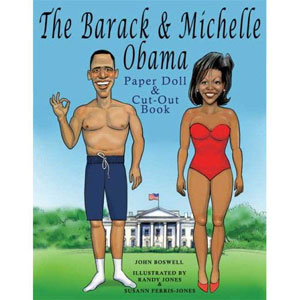 Not every tribute to the first family is a flattering or understandable one. This set of paper dolls seems to cast Barack and Michelle as Malibu Ken and Barbie. 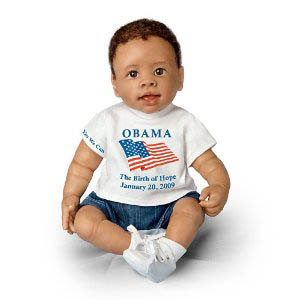 Ashton-Drake has a version of presidential pride in the form of a Hope-embracing baby doll. 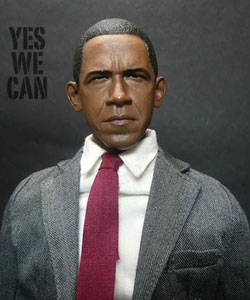 Sending out a Denzel Washington vibe, this Hot Toys version of an “African-American man” has been deemed a Barack Obama look-alike on the Web. Though not noted as an official presidential portrait, its debut during the first Obama administration was not a coincidence.

The past three days have been officially labeled as “Inauguration Weekend,” and while Washington swells are dressed to the nines and burning the midnight oil, I’m home with the kiddies playing Clara Barton. (Incidentally, the town next to mine has a district called the “Clara Barton downtown” that honors the venerable American Civil War nurse.) Both my children are suffering from some form of the flu/virus/colds from hell and are shivering and hacking away. During the nursing and soup making, I’m listening to the radio give a play-by-play of the upcoming presidential festivities.

On Sunday morning, at 11:55, I propped the children in front of the TV and we caught the official swearing-in. Interestingly, the “real” one—the taking of the oath that actually counts—was done in semi-privacy, if you count broadcasting on American and International News Agencies as being a private affair.

Yes, with Michelle, Malia, and Sasha standing beside him, President Obama was sworn in by Supreme Court Justice John Roberts to begin his second term. Watching the quick ceremony—it was completed in under a minute—I was surprised at how fast it was to assume the mantle of the world’s most powerful leader. I’ve had to fill out applications and been screened for membership at Costco that has taken 20 times that length.

I explained to the kids what was happening—they don’t remember 2008’s ballyhoo—and told them how on Monday the swearing-in will be ceremonial but will be enormous! The one that counts is small and subdued; the one for show is just that—showy and colossal.

One of the tidbits that was being spouted during the broadcast on Sunday was that the Blue Room, Obama’s choice for the private ceremony, was one of the smallest rooms in the White House. The anchors kept mentioning how it is a “little room, not a stately one at all, only measuring 40 by 30 feet.” That made me chuckle out loud, because that’s nearly the size of my entire house! So much for scale. I guess Einstein is right: it’s all relative.

When my children and I were discussing the White House—both want to go and visit tomorrow (good luck)—I mentioned how there is a famous doll house of the White House and it toured the country during the bicentennial. It even ended up in my childhood neck of the woods: Kings Plaza Shopping Center in Brooklyn! I went to see it in my kiddie days.

Jane, my 8-year-old, wanted to know if she could turn her doll house (a Hannah Montana beach house) into the White House. I said she could, but it would take a lot of energy and vision. Then she wanted to know if there were Obama family dolls to put into the abode. I’m sure there are doll house–sized replicas, but I didn’t own any.

That got both Tommy, who is 10, and Jane to talk about how it must feel to be made into a doll, and is that a good or a bad thing? (Again, an Einstein relative matter.) They decided it would be good if the dolls were flattering, but bad if they were cartoonish or insulting.

I told them how being “caricatured” (vocabulary word of the day) was part of being president. No one in high office ever escapes being lampooned, and there are many unflattering Obama dolls that have been made. There are also a bunch of very complimentary ones of the commander-in-chief and of the first lady.

Together we surveyed a whole array of them and discussed which looked the most like the real deal and which were kind of amateurish or insulting.

Jane, who is born in China but wants to be president, conceded that being ridiculed in plastic might be a drawback to the job of America’s leading statesperson. Still, she confessed that she was willing to put up with a toy store’s worth of bobbleheads to be head of state. That’s Jane’s secret wish: to have the Constitution amended to allow naturalized citizens to be president. (I kid you not. She’s spooky-scary smart for a second grader.)

Whether that ever happens is something for Congress to deal with down the road, but for now I’m pleased as punch to see how both Tommy and Jane are happy to dive into discussions of American government, how it affects the country, and how it affects them. Pretty bright and involved for elementary-school students.

It also made me glad to see that dolls and doll houses can be used to teach a lesson about civics and social responsibility. We all know that dolls are more than just playthings and toys to be dismissed casually and carelessly. Once again, an unplanned conversation with my children was bolstered by the visuals of dolls and the role they play in pop culture.

I guess that in spite of the sneezing and the wheezing, it turned out to be Inauguration Weekend at my house as well. Even if my whole home is the size of the “understated” Blue Room, we have a lot of pride in being part of this much larger, much more meaningful American tapestry.

Democrat or Republican, rejoice in this weekend. It marks the way we peacefully hand over or preserve the powers that be. And that is something worth saluting. 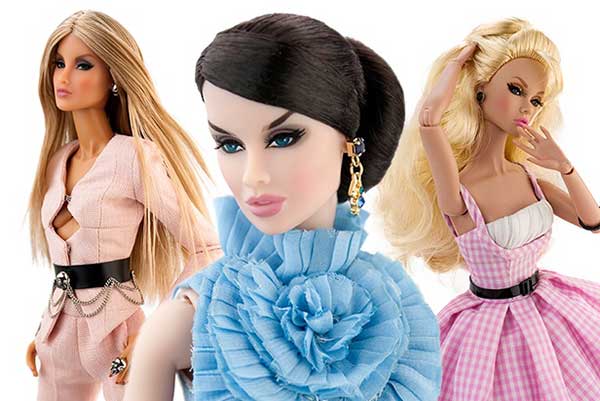