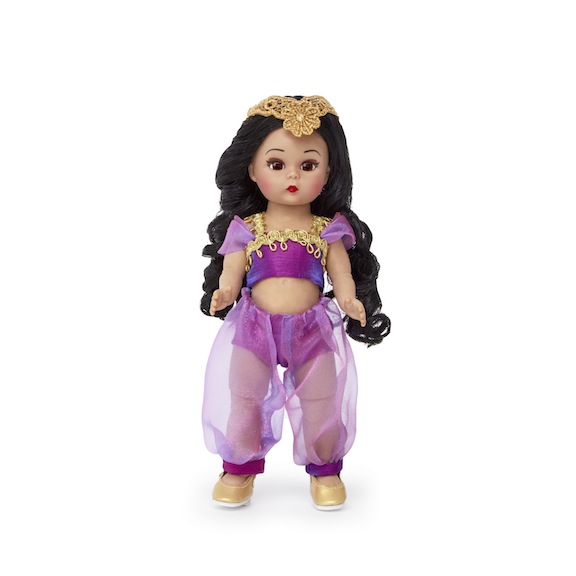 Versatility is applauded in the theater world. Actors who are able to embody radically different roles are given Oscars, Emmys, standing ovations, and million-dollar paydays. Keeping that in mind, I have to nominate Madame Alexander’s Wendy as one of the most versatile dolls in the collectibles universe. Wendy is a mere 8 inches tall, but she packs a fashionable wallop. This year’s collection is no different. There’s no denying it — the Wendy doll is the Meryl Streep of playtime and playthings. 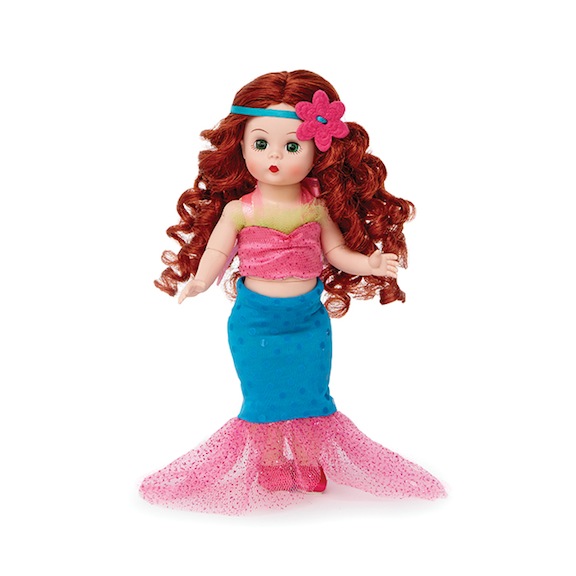 The Mermaid Princess, new for 2019. Wendy takes a Storybook plunge.

The Wendy doll is named for Beatrice Alexander’s granddaughter. Her male dolls (less popular) are called Billy, after her grandson. Both dolls symbolize childhood innocence and wholesomeness — traits that appeal to a proud grandma. With the Wendy doll, Madame Alexander permitted this doll body to have her moment in the spotlight. A true lover of literature and movies, Madame Alexander cast the Wendy sculpt in myriad roles. It’s sort of like a manufacturer’s version of Gypsy. Rather than a tireless stage mother, Madame Alexander was a determined grandmother and businesswoman. Her Wendy would be the face of the company. 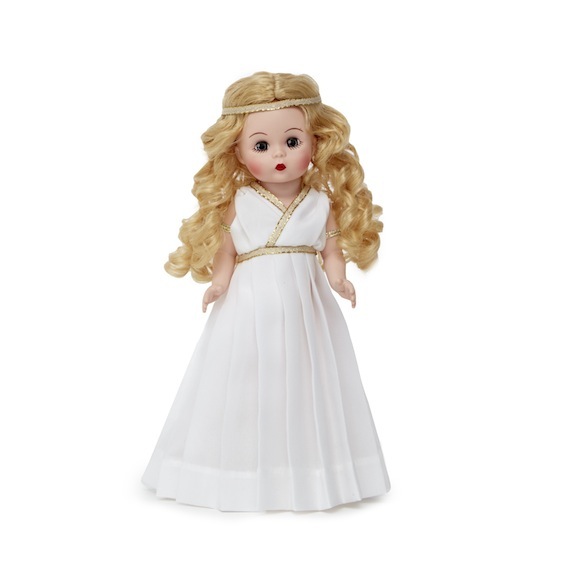 Wendy assumes the role of a Greek goddess in her Greek Prinkipissa costume.

In 2019, the Wendy doll has assumed a ton of impressive roles. Giving Meryl Streep and even Daniel Day Lewis a run for their money, the Wendy doll is popping up everywhere. The 2019 Madame Alexander Collectible Dolls is ripe with lovely costuming and fascinating characters. It’s truly akin to an epic costume drama starring the fabulous Streep or her younger counterpart, Cate Blanchett. 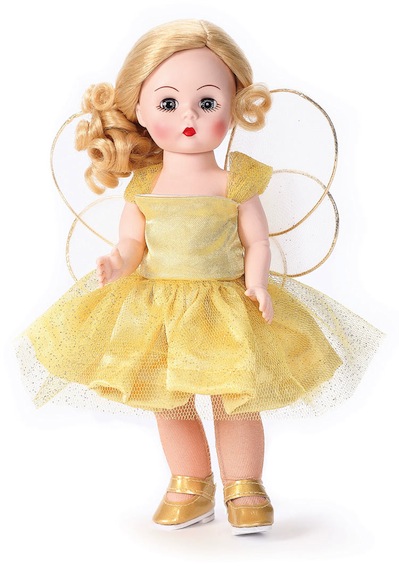 Known for her dedication to bringing literature to life, Madame Alexander always adored her Storybook creations. For 2019, the Storybook collection unveils three new dolls, beautifully boasting the Wendy body. Due to wigging, skin tones, and, of course, costuming, each new Storybook doll is a unique revelation. The Wendy doll rocks it as a Mermaid Princess, the heroine of 1001 Nights, and a tiny version of an adorable pixie. A Little Fairy Dust is more than that. She’s a sweet reminder of the power of positivity, collectibility, and durability. This Wendy doll soars! 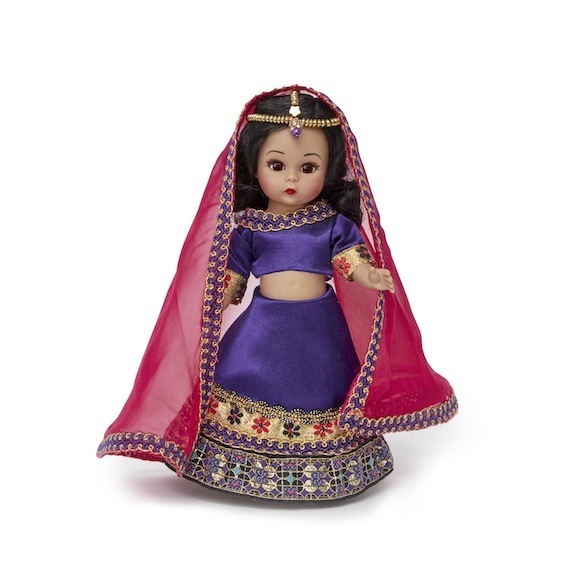 The Wendy doll pays homage to the culture of India with the Indian Rajakumaree ensemble.

The International Princesses are another eagerly awaited collection for 2019. Again, all of these Wendy dolls sport opulent dresses and cascading tresses. They are designed for collectors aged 14 and up, but many relatives buy these as keepsakes for younger children. This year’s new additions are absolutely magnificent. There are three new International Princess dolls, and one International character doll. In other words, three are garbed sumptuously and splendidly. The fourth is much more casual and contemporary. The royal Wendy dolls are the Indian Raajakumaaree, the Scottish Banfhlath, and the Greek Prinkipissa. This newly introduced trio for 2019 measures 8 inches tall and is articulated. 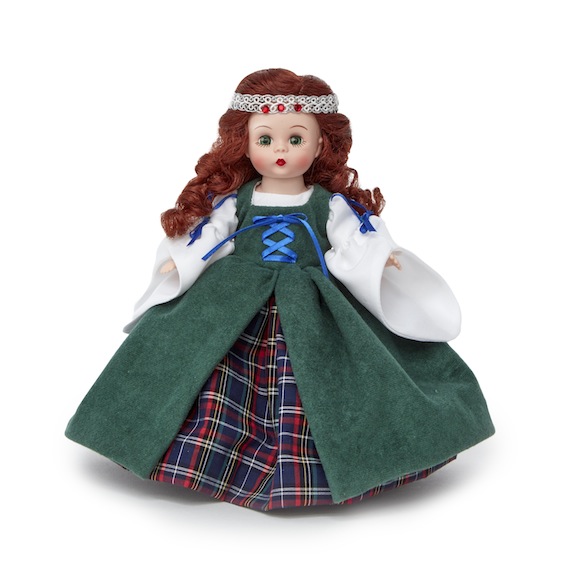 The fourth new International Doll hails from Ireland. Little Piper appears ready to burst into song. One can easily imagine her playing an Irish ballad on her pipe and leading a room in an old-fashioned sing-along. She is a beautiful lass with her flaming red hair. Shades of screen legend Maureen O’Hara abound! 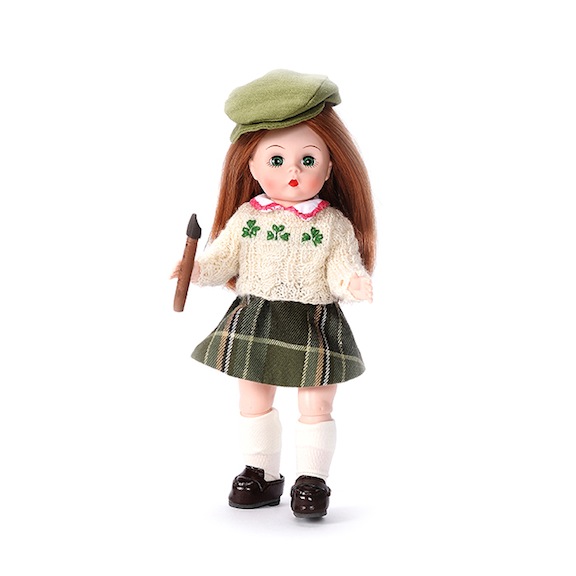 Little Piper places the Wendy doll on the Emerald Isle.

Seasonal Collectible Dolls have always been a part of the Madame Alexander legacy. This year is no exception. The Wendy doll makes merry in her red-plaid Cabin Christmas attire. The flaxen-haired doll comes with a joyful, bow-decorated wreath. Icy Elegance is how the Alexander Doll Company describes their winter-themed Wendy doll. Cool, graceful, and aloof, Icy Elegance is a modern-day tribute to Princess Grace, don’t you think? Her clothing is evocative of icicles, snowflakes, and cold, blustery winds. It is a marvel! 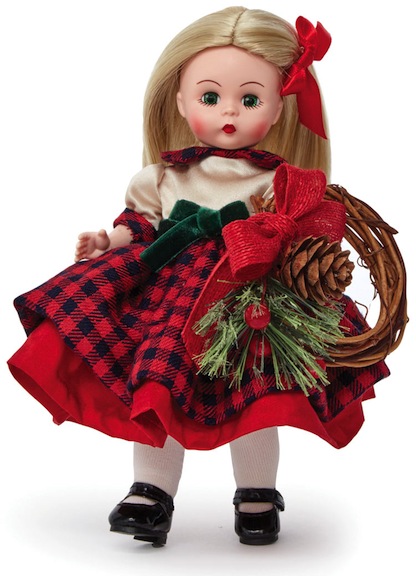 The Wendy doll does Noel in a warm, cheery way. Meet the Cabin Christmas version.

In addition to the fair-skin and fair-haired version of Icy Elegance, Alexander also has a dark skin/brown eyes/black hair version of the character. Over the decades, the Wendy doll has been used as the template for dolls of all nationalities, ethnicities, and cultures. Incidentally, this year, the variability is seen in Alexander’s Butterfly Ballerina. Part of the Ballet collection, she plays the talented prima ballerina in a light- and darker-skinned version. 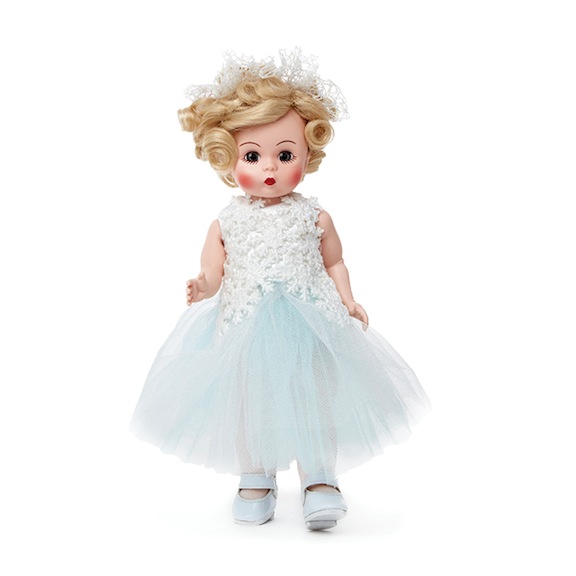 Icy Elegance is available in both a fair-skinned version and as a dark-skinned Wendy doll.

The third new seasonal doll for 2019 has arrived in time for trick-or-treating. Decked out in whimsical witch wear — try saying that three times — Potions and Purrs combines two Halloween favorites: magic and felines. Channeling Kim Novak, perhaps, in “Bell, Book, and Candle,” the Wendy doll is a hybrid of a human sorceress and a clever cat. Her costuming includes an eared witch’s hat and a long tail with a bow. Honestly, she equals Sabrina the Teenage Witch with a dollop of Julie Newmar or Eartha Kitt added for good measure. (Both those ladies were purr-fectly cast as Batman’s nemesis, Catwoman.) 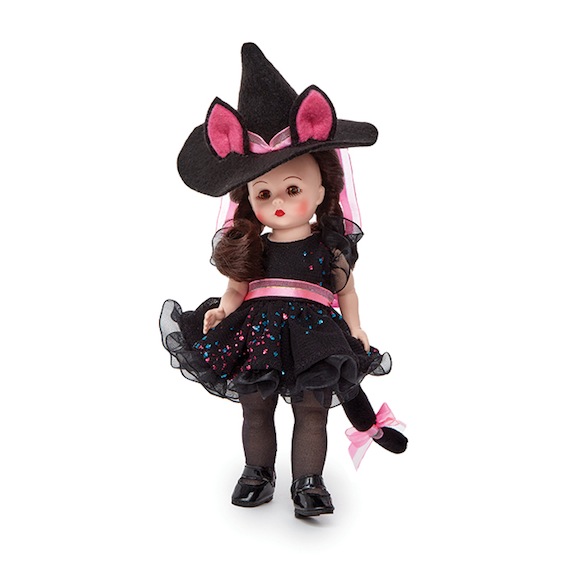 Potions and Purrs blends “boos” with “meows.” The Wendy doll is sweet and scary.

The Wendy doll is Madame Alexander’s most recognizable doll. Regardless of how she is “dolled up” and transformed, the 8-inch creation is a testament to a grandmother’s devotion. Madame Alexander gave her grandchild a dose of immortality and enduring pop culture fame. Wendy has been a collectible staple for more than half a century. The 8-inch doll debuted in 1953, so she is a spry 66 years old. 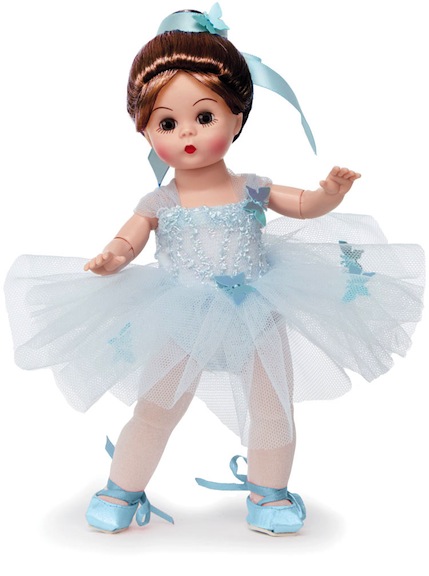 Take a bow, Butterfly Ballerina. The principal dancer is available as light-skinned and dark-skinned Wendy dolls.

So, the Wendy doll has qualified for her AARP card and her Social Security payouts! That’s a sobering thought. Wendy is eternally young, though, like the fictional, boastful Peter Pan. On the reality front, she shares a birthday year with 66-year-old movie stars Mary Steenburgen and Kim Basinger. Those two cinematic luminaries made their arrivals in 1953 and have been taking their curtain calls ever since! Madame Alexander‘s Wendy is in fine company!