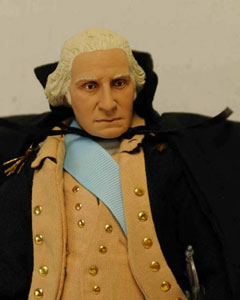 George Washington, the “Father of Our Country” has inspired doll artists and manufacturers over the centuries. 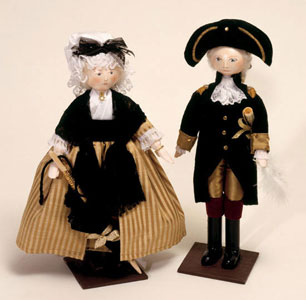 The Mount Vernon Organization has many Washington dolls for sale, and has a look at some of the likenesses that have been made. George and Martha are a wooden duo in this pairing. 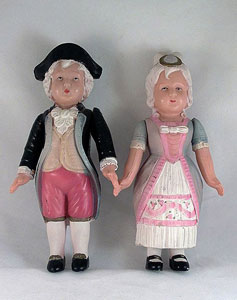 A Japanese celluloid interpretation of the first president and the first “first lady” was available for purchase on Ruby Lane. 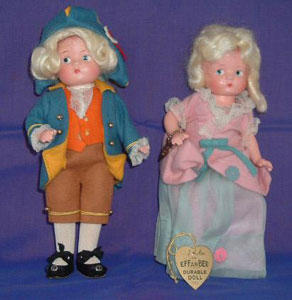 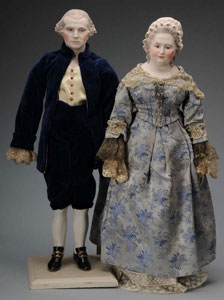 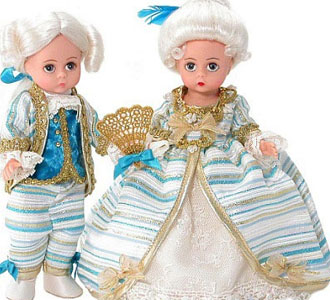 An Alexander Doll Company version of the Washingtons is available at the Matilda Company. (http://matildadolls.com) 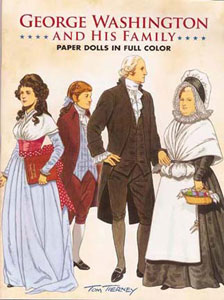 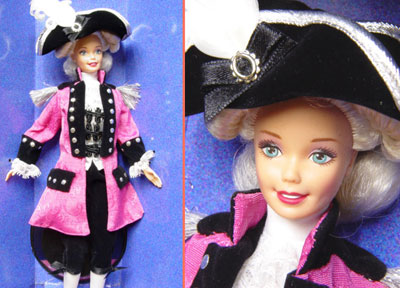 Even though a woman couldn’t be president in 1776, Barbie declares her independence as an FAO Schwarz exclusive, Barbie as George Washington. 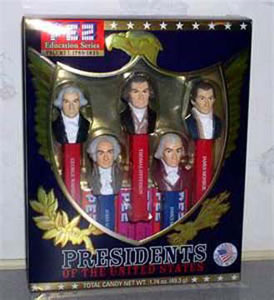 Politicians have made outlandish promises over the decades. Why not a Pez in every pocket? 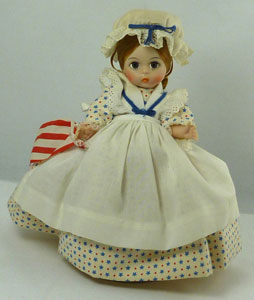 Part of our country’s folklore—the historical authenticity is debatable—Betsy Ross is credited with sewing our nation’s first flag. 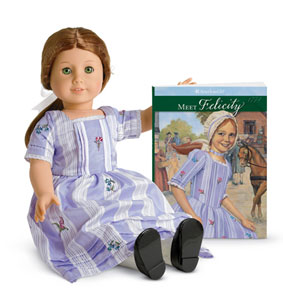 Future historians, politicians, leaders, and real-life heroines might come about because of the American Girl dolls and companion books. 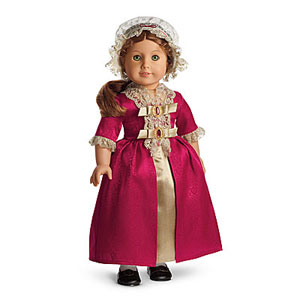 Radiant in Red: Felicity is indeed a “spritely and spunky Colonial” girl. 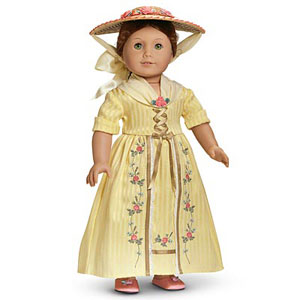 The wardrobe of the colonial era is fashioned for the American Girl heroine. Here is a lovely outfit that speaks to spring and good taste. 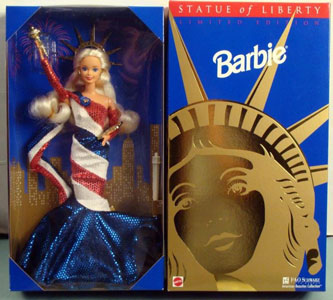 More than 236 years ago, the idea of a new nation founded in liberty for all came into fruition. This 1995 FAO Schwarz Barbie exclusive honors the notion of freedom for all who come to our shores. 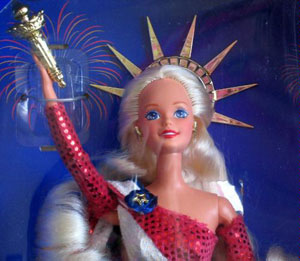 The face of an American doll collection: Barbie as Lady Liberty, courtesy of FAO Schwarz.

Well, it’s the week after Election Day, and depending upon one’s political slant, it’s either a cause for celebration or a case of consternation. Regardless of how the vote turned out, and your personal reaction to it, people who cast their ballots exercised a constitutional right that separates an enlightened nation from other countries that still toil in darkness. A change in leadership—or in this case, the maintaining of the status quo in the executive and the legislative branches—is accomplished by pulling levers, not by triggers being pulled on rifles and handguns.
As doll collectors, we “vote” each time we buy a certain doll and then follow up with purchasing more accessories, clothing, paraphernalia, and friends for that creation. If a Barbie sells a million units, it shows that Mattel is on the right course. If another company launches a doll, and only a hundred are rung up at cash registers around the globe, they know that the collectors have voted thumbs-down.
So, doll aficionados are voting with every shop visit and with each Internet shopping-cart click. Seeing that we’re always exercising our right to choose on a daily doll basis, let’s reflect on the “Father of Our Country” and how he’s been honored in the collectibles arena. Yep, General George Washington—the man who could be king, but chose to be a mere politician and walk away after his service was over—has been fashioned as a doll by companies, artists, hobbyists, and illustrators. (You can find lots for sale at http://www.rubylane.com/)

Washington, who was literally heads and shoulders above his peers, was a tall man who cut a dashing figure. By our modern standards, we stare at his powdered wig, puzzle over the notion of wooden teeth, and wonder why we don’t see a lot of Washington look-alikes strolling among us today. (Isn’t it odd how the people of a century or two ago don’t seem to have doppelgangers in today’s population? When they passed away, they seem to have taken their very strong facial features with them.)
The Washington dolls and his contemporaries—wife Martha, seamstress Betsy Ross—run the gamut from historically accurate to adorably historic. (Some of the renderings look as if they were made with a keen eye to the National Portrait Gallery, while others get by with a cute mobcap and a sweet pinafore.)
During a recent visit to Philadelphia (we go there a lot) and a tour of the historic landmarks, we had to stop in at souvenir shops along the stroll. For my kids—now 10 and 8—a trip means a chance to snap photos, read brochures, listen to tour guides, and then make it real via a purchase at the memorabilia store. (We have pencil sharpeners and balancing eagles galore.)
At the Independence Hall National Visitors’ Center, the shop is chockfull of T-shirts, coloring books, shot glasses, and banks that idealize Washington, Franklin, and Jefferson. There are also shelves and shelves of dolls, paper dolls, and more dolls. Amid the plastic presidents and cloth colonists, we also found Pez dispensers that salute the Founding Fathers. That shows how much we’ve changed as a country, don’t you think? We’re now so advanced that we can create effigies of our national leaders that shoot candy out of their necks. (Come to think of it, that could be the next step in political campaigning promises and enticements.)
Amid the Martha and Betsy re-creations, there were also American Girl offerings: those ever-popular dolls that run the gamut of Revolutionary War heroines right up to 2012 modern-day tweens.
The 1770s doll, “Felicity Merriman,” is said to be “spritely” and “spunky.” And after watching the movie at the Visitors Center that introduces guests with kids to what is in store for them in the historic district—giving background information in a way that children can comprehend and get excited about—those two adjectives are understatements. Young children and teenagers who kept personal diaries during the years running up to the Revolution are astonishingly literate and informed. The kids who lived in the days of Washington and Adams were bright, articulate, able to make judgments, and capable of penning journal entries that sound as smart as a “Wall Street Journal” editorial today.

Felicity (http://www.americangirl.com/play/historical-character/felicity/#page=home) is a testament to the young girls who lived in the days before America was codified as a nation. And the American Girl franchise has always managed to weave a splendid tapestry of their doll heroines against the actions and activities that molded the United States into the country it has become.
As we walked around Philadelphia, we saw a half-dozen little girls touring the town with AG dolls tucked beneath their arms. My daughter complained then that she wasn’t allowed to bring hers, but I try to cut down on the number of possible lost articles when we’re on the road.
Witnessing the little girls who were taking the Philly tour, literally armed with their historically inspired playthings, gives me hope for our country. When Felicity would have been alive, despite her literacy and cleverness, she could never hope to run for office, lead a congressional delegation, or even cast a vote for president. Now these young girls have a future sprawling before them that allows them to aspire to be the first “Mother of Our Country.”
Who knows if any of these young girls will ever grow up to be a politician? Becoming a good, responsible citizen is a high honor, in and of itself. (Plus, if the tea leaves are to be read by scuttlebutts after the election, 2016 might feature two women nominees going mano-a-mano.) I’d like to think that President George Washington would be proud. I KNOW that Abigail Adams would be downright over the moon! 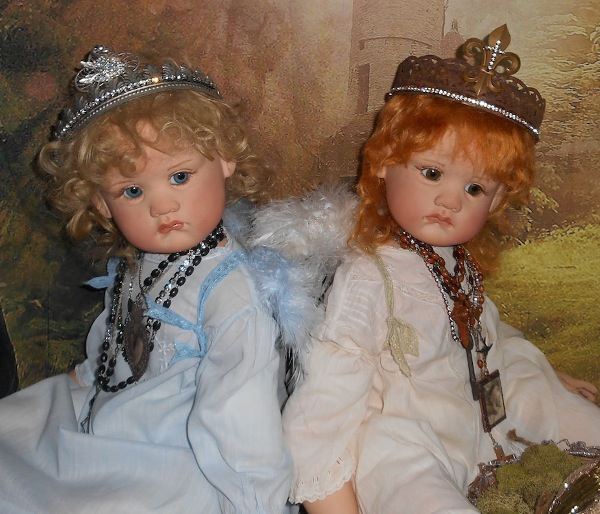 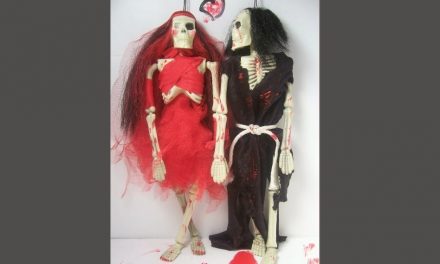 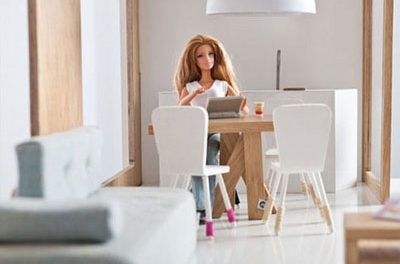