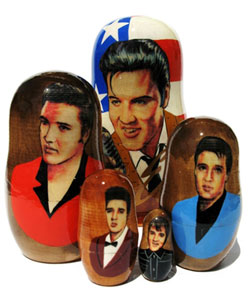 You can’t get more American than apple pie, fried-banana and peanut butter sandwiches, and Elvis! The swiveling and sneering legend is depicted on many Russian nesting dolls—quite an accomplishment for the “Teddy Bear” troubadour. 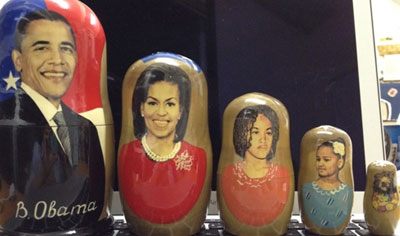 Barack Obama and his wife and children are perfectly portrayed on this new nesting doll. There’s a bizarre twist in translation, though, when “Bo the dog” is depicted as “Bo the bear”! 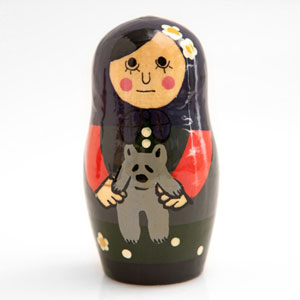 The traditional matryoshka often depicted rosy-cheeked females garbed in folkloric costumes and kerchiefs. This version is cuddling a bear . . . or is it a dog? Only the artist knows for sure. 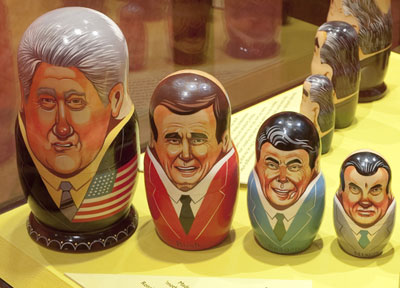 Many of the famous figures who have occupied the Oval Office are found as nesting dolls these days. Here is a lineup of GOP leaders and a lone Dem: Clinton, Bush Sr., Reagan, and Nixon. 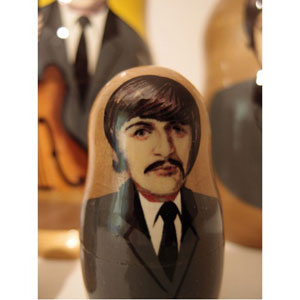 Is it Ringo Starr or John Lennon? Sure looks like Ringo to me, but it is described as John in the doll description. Perhaps it’s not Lennon, but Lenin? 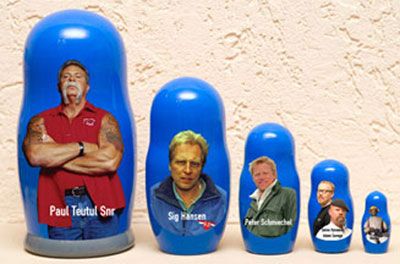 Did you ever think in the post-perestroika world that we’d have nesting dolls that celebrate TLC TV stars like “American Chopper” and “MythBusters”? The people who pop up on these dolls are quite astounding. 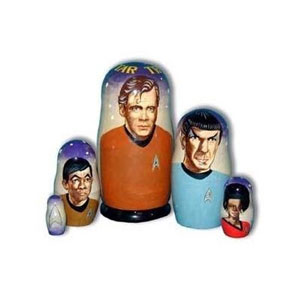 The final frontier of proving that the Berlin wall and Iron Curtain have been pulled away: a set of “Star Trek” matryoshkas. 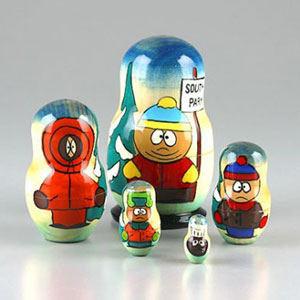 “Oh my God, they’ve killed Kenny” rings true all around the globe, as this set of nesting dolls proves. 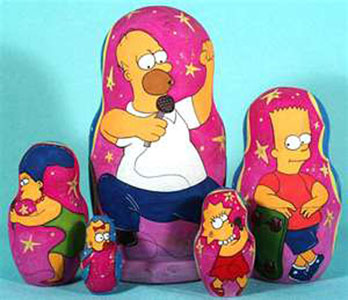 America’s premier nuclear family, the Simpsons, is celebrated in this stacking set. 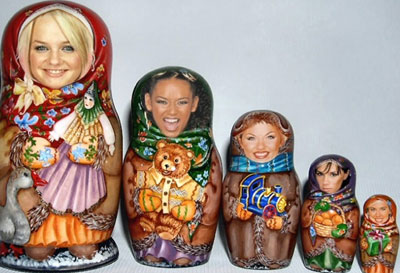 Girrrrrllllll Power! The Spice Girls were a huge singing sensation from London to Leningrad.

I have a confession to make: when I was a young girl, I LOVED Russia. Yes, I “hearted” the Soviet Union big-time. Now, I’m not speaking about their political system, or their less-than-freely-held elections. Nope, I wasn’t crazy about the Kremlin and its policies, but I was awestruck by the onion-domed cathedrals, storybook spires, and the whole landscape that always seemed dipped in lacy snowflakes and glistening icicles. For me, Russia looked like a Hans Christian Andersen opus sprung to life. I adored it, and as a kid I imagined it would be the chance of a lifetime to visit Moscow or St. Petersburg in person and marvel at the out-of-this-world architecture.

As I grew older, I learned that the fairy tale settings had a dark side, and I was taken aback to discover just how bleak and oppressed many of the lives were that unfurled in front of these beautiful fairy-tale facades.

With the dismantling of the former Soviet Union, and its transformation into more of a socialistic, Western European system, modern-day living conditions evolved and improved. And throughout the upheaval, all the facets that intrigued me remained in tact and became more accessible to all of us non-Russians around the world.

While Russia became more open to travelers—and not just “fellow travelers”—it also became more receptive to Western ideals and American ideas. Pop culture, gorgeous celebrities, and politics from all over the globe began to be imported into Russia after the collapse of the Berlin wall and the dismantling of the Iron Curtain. Blue jeans, Mickey Mouse, rock music, and action movies infiltrated the marketplace, and the emerging Russian capitalists blended the vibes of the brand-new world with the traditions of their past.

This is especially true with the matryoshka or nesting dolls. You know what I’m talking about—those carved or molded dolls that have a slightly wobbly penguin shape to them and they open up to reveal one smaller doll after another smaller doll. I have a pair of them at home—both are cat themed and were brought back to me as souvenirs from friends’ trips overseas. Cats are pretty generic and a safe bet for a nesting-doll sculptor: after all, everyone from Ernest Hemingway to Pee-wee Herman loves and owns a cat!

When the sculptors or mass manufacturers start to pinpoint recognizable American stars or sex symbols, that’s when the fun really begins!

Recently, an Internet blogger chatted about the bizarre Obama matryoshka that his associate stumbled upon in a Russian gift shop. It was a salute to the whole Obama family: with the president, wife Michelle, two young daughters, all nicely rendered and fitting one inside the other. However, when the last family member was revealed—White House dog Bo—it was a bear. A bear wearing a Hawaiian lei, no less.

It’s strange, quirky goof-ups like this that make the nesting dolls so irresistible. They have the heritage of their native land in play, but also a charmingly awkward appreciation of foreign faces and figures.

Politics of an international flavor are widespread among the matryoshkas. There are renderings of Germany’s, France’s, England’s, and Japan’s leaders. Of course, the American presidency is replicated in flattering and parodying fashions. Some of the nesting doll artwork are caricatural and cartoonish; others are spot-on and nearly portrait-like. It’s all in the roll of the die-cut! For instance, some of the Bill Clinton portrayals are near photographic. While in others, he looks like a kissing cousin to Boris Yeltsin. It’s humorous to see how a well-known personality can be either lionized or lampooned.

What’s also fascinating is how the outreach of what we take for granted—animated TV shows, science-fiction, movie stars—has made a seismic change in another country’s mind-set and national piggy bank. After decades of mistrust and misconceptions, the Russian tourist industry keeps well-oiled with its salute to the stars-and-stripes.

The Elvis nesting dolls are always a treat to open up and explore: common sense might dictate that “fat Elvis” would be the biggest of the dolls, unscrewing to reveal the rock-n-roll king throughout all of his incarnations (jumpsuit Vegas phenomenon, hip-shaking movie star, U.S. Army private, and guitar-strumming hopeful). However, the one thing about these dolls is that logic isn’t always followed, and the biggest real-life Elvis might be scaled down to fit in the smallest casing.

Like I always say—and continually blog—dolls are soooo much more than playthings, or even personal artistic expressions. They can be a totem for how countries view one another, shun one another, fight one another, and then eventually cooperate with each other. In a world that used to fret about mutual self-destruction and prayed for “perestroika,” these sometimes silly and often opinionated nesting dolls are a measure of how far along relations between Russia and the U.S. have come. As a doll collector—and a onetime little girl who dreamed of turrets and firebirds—I’m glad to see that “glasnost” has taken root in the nesting doll world (http://www.russiantreasure.com/).

And since we the people of America are often symbolized by the eagle, and Russians by the bear, maybe it’s a good thing that Bo the dog is portrayed as Bo the bear. Maybe it’s a sign that our countries are meeting somewhere in a mutual place of self-evaluation and are working to improve, innovate, and inspire.

Star Turn: Angela Cartwright has excelled as an actress, an artist, and a doll