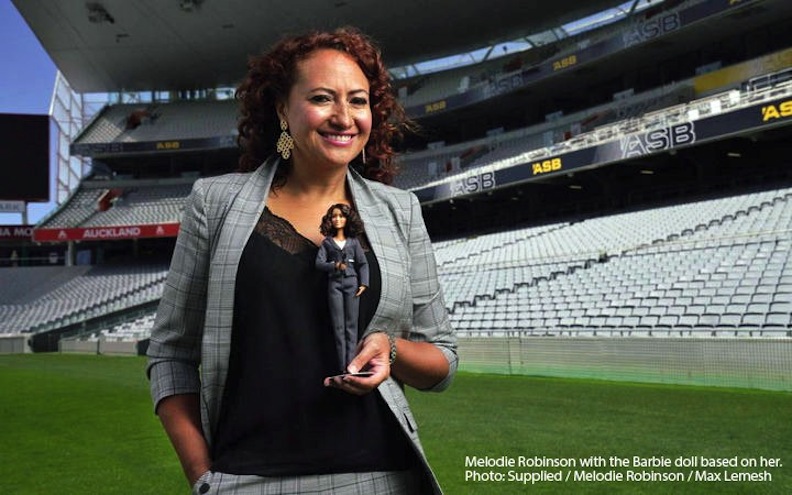 Since 2015, Mattel has been actively scouring the globe for women who represent female empowerment, self-assurance, and achievement. These role models are cleverly called “Sheroes,” and in their honor, Mattel has fashioned lookalike dolls. The Shero candidates for 2019 are a Who’s Who in womanly success stories and professional bravery. Twenty women were selected to become 2019 Shero dolls, and the list of honorees focuses on contributions in the field of academics, culinary arts, literature, film, and physical fitness. 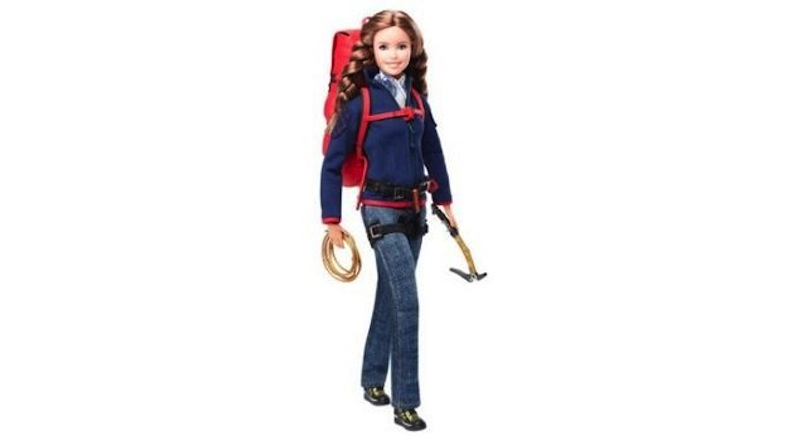 2019 Shero doll that proves all women can climb to pinnacles of success: mountaineer Karla Wheelock

This week’s blog is concentrating on the 2019 Shero dolls that capture the energy and self-propulsion of the athletes and physical daredevils. It’s interesting how Mattel has often been dismissed as a purveyor of unrealistic body types and fairy-tale, contrived “happily ever afters.” In fact, so many people groused about how “perfect” Barbie’s life was that the toy giant decided to break up her long-assumed engagement with Ken. Rather than breaking the mold and marrying, Barbie eschewed marital bliss for a lone shot at achievement. Talk about being solo in the spotlight! 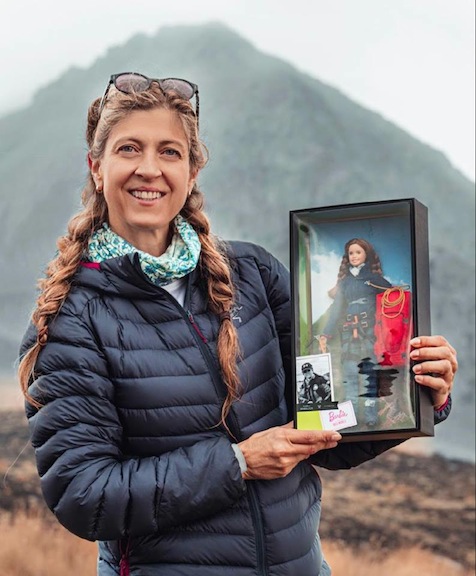 Karla Wheelock, one of 2019’s Shero honorees, with her doll image (Courtesy of Wheelock Twitter)

Mattel’s decision not to let Barbie and Ken wed was a nod to the often maligned and commonly joked-about belief that women can have everything. Yes, indeed, Barbie can do anything — she has a hashtag to prove it — but apparently she just can’t be married while climbing her pinnacle to success. She can run a mile in seconds flat; she just can’t walk down the aisle.

Mattel describes the 2019 Shero dolls as women who “continue to break boundaries.” In honor of Barbie’s 60th birthday — she’d be a proud member of AARP by now — Mattel has unfurled their biggest celebration of role models ever. “Barbie will honor 20 women across multiple countries and continents, 18 countries in all, ranging in ages from 19 to 85, and speaking 13 languages,” their spokesperson stated. “This is the largest and most diverse lineup of women honored to date by Barbie and a continuation of our highly successful Shero program.” 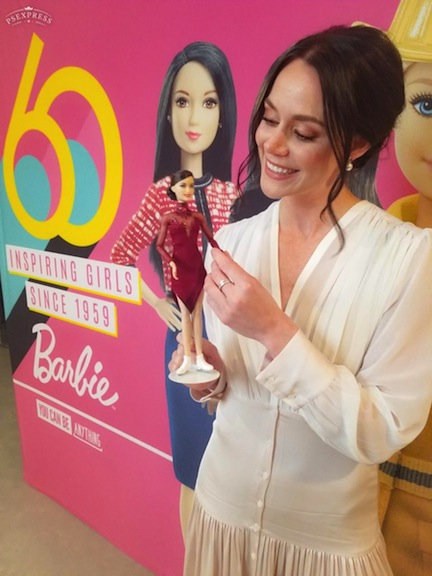 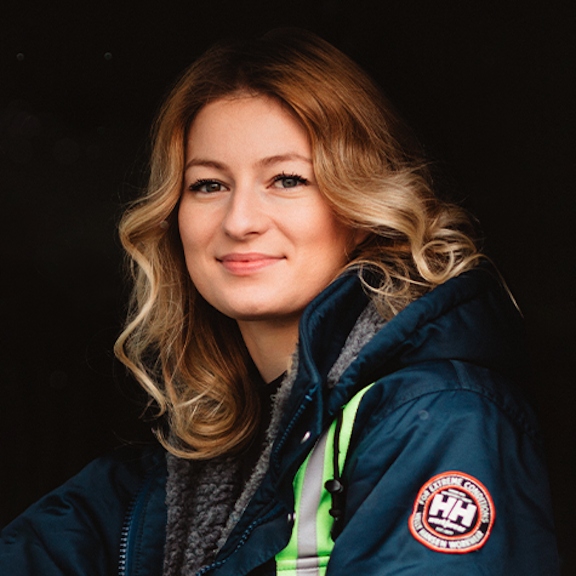 Star of a popular YouTube channel and advocate for truckers’ rights, Iwona Blecharczyk was selected as a 2019 Shero.

The nine women and their doll likenesses are incredible studies in chasing after physical perfection, while not falling into the trap of what constitutes “perfection.” Too often, young girls and women fall to the social-media and mainstream media drumbeat of what a beautiful, desirable woman should look like. The term “Barbie” has even been bandied about as an insult! With programs such as the 2019 Shero dolls, the toy company strives valiantly to turn that notion around. Since people are allowed to evolve and to grow, why not Barbie and her Mattel manufacturer? Much has changed since 1959 when Barbie made her initial bow. Over these past 60 years, we’ve seen women climb to great heights — literally and figuratively. So, perhaps, naysayers should cut Barbie some slack. She’s not the plastic princess she used to be.

These nine dolls definitely drive home — even in a huge hauling truck — the belief that women can push themselves to the physical brink and earn applause for being a “jock.” Back in 1959, even into the early 1970s, Barbie was primarily relegated to being a cheerleader or a homecoming queen. She was on the periphery of the sports world, shouting loudly for football hero Ken, or making decorations for Spirit Week with good pal Midge. It’s quite remarkable that in the 60 years since her arrival, there are nine 2019 Shero dolls that specifically acknowledge feats of strength, endurance, persistence, and the overcoming of obstacles. 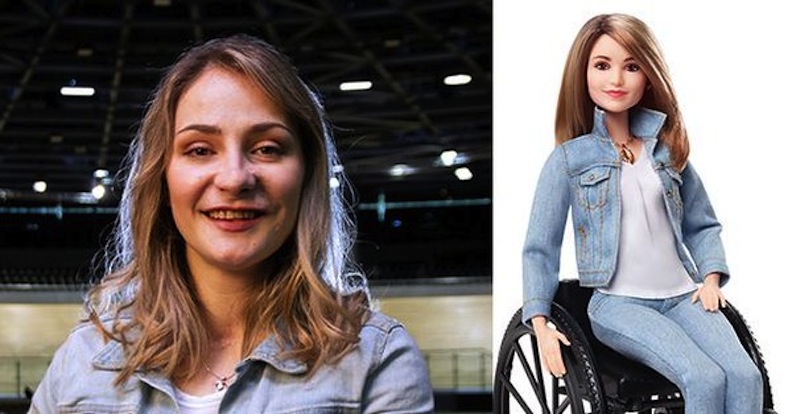 Cyclist Kristina Vogel has become an emblem of rising above physical challenges. Her 2019 Shero doll celebrates her courage.

Cyclist champion Kristina Vogel is the most obvious example of having a roadblock that threatens to topple one’s game plans and life’s purpose. Paralyzed, and now getting around in a wheelchair, the track-cycling champion has not allowed her injuries to subvert her public profile. Once the best female track cyclist in the world, Vogel endured the usual number of spills during practices and meets. However, two major accidents created setbacks for her that are unthinkable and proof that life is unpredictable. A run-in with a motorist in 2009 left her in a coma with several broken bones; still, she bounced back to compete.

For the next nine years, Vogel put that auto accident behind her. She continued to race and to win. However, in 2018, her lucky winning streak came to a terrible end. She had a collision with a Dutch junior cyclist, and it resulted in her paralysis. Vogel has learned to adjust to life in a wheelchair and to set different goals and expectations for herself. Proving that she cannot be confined, Kristina Vogel told the German press, “Since my accident I feel free.” 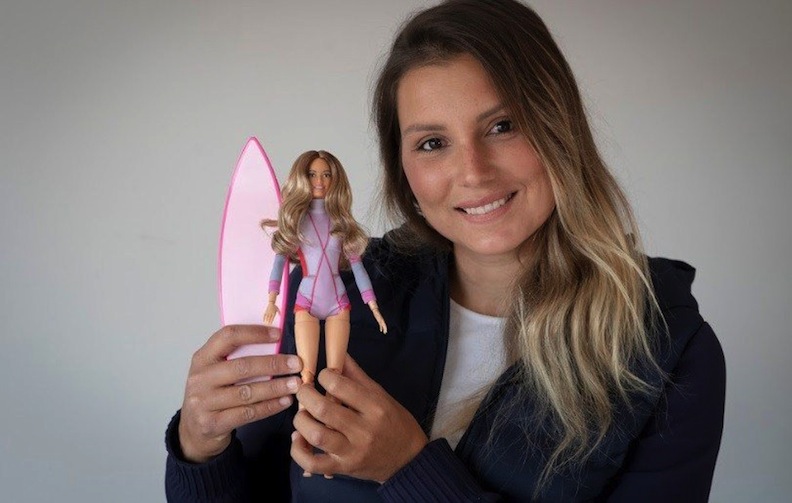 The nine athletic 2019 Shero dolls are a testament to what the human body and mind can do when they work in tandem. Maya Gabeira, the world-record holder in big-wave surfing, also suffered a serious accident in her sport. In 2013, while trying to best her own world record, Gabeira suffered a major wipeout. Severely injured, she was determined to get back up on the board and to “hang ten.” In January 2018, she had fully recovered from her injuries. It was time to face a challenge once more. 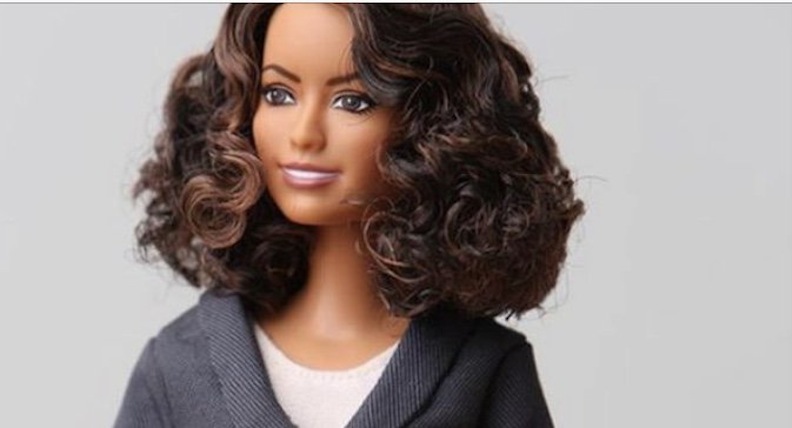 Melodie Robinson is a popular sports journalist in New Zealand. Her 2019 Shero doll is the first-ever Mattel Maori Barbie.

With belief in herself and her power to heal and to overcome adversity, Gabeira surfed a 68-foot wave (20.7 meters). She became the first woman to ever set a Guinness World Record for “the largest wave surfed (unlimited).” It wouldn’t have happened if she had given in to her pain or her anxiety or her fears. Instead, she faced down her own phobias and a monumental mass of water and “went for it.” That’s the very lesson that the 2019 Shero dolls are teaching: barriers are there to be broken and to be toppled. 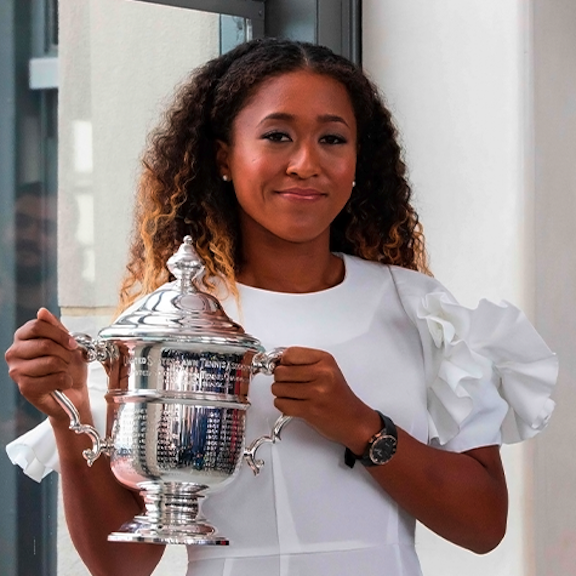 Ranked as the world’s number one women’s tennis player, Naomi Osaka was a smart choice for a 2019 Shero doll.

One of the youngest 2019 Shero dolls is Japanese tennis player Naomi Osaka. Born in Osaka to a Japanese mother and a Haitian father, Osaka does not look like most of the people she grew up with. She was unique with her heritage, her biracial appearance, her height, and her drive to win. Her childhood idol was Serena Williams, and Osaka played against Williams in the 2018 U.S. Open. Much to the surprise of the tennis attendees, and to Williams herself, Osaka won the match. She was the newly crowned champion of the U.S. Open.

Many people thought it was a fluke, and Osaka proved them wrong. She won the 2019 Australian Open and is now the Number 1 player in women’s tennis. When the Olympics are held in Tokyo in 2020, Naomi Osaka will be the sporting event’s goodwill ambassador and photogenic face. 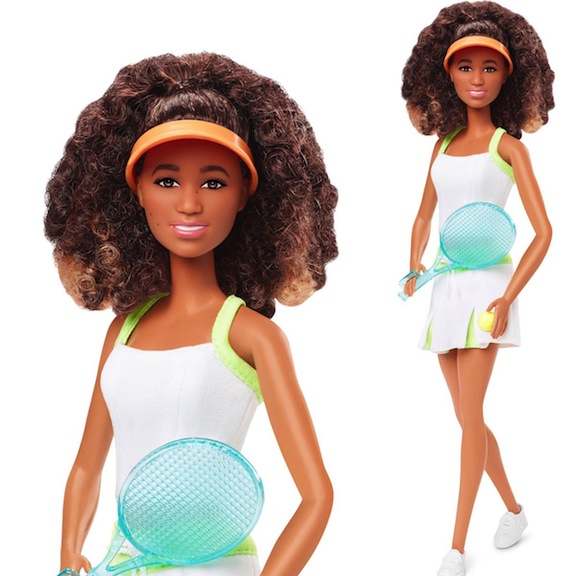 Osaka is definitely a new face for a new millennium. She is rewriting the code for what is beautiful, what is desirable, what is attainable, and what is achievable. She is a strong, healthy, confident, and powerful young woman. The 2019 Shero dolls, from their head to toes, reflect the new world order. Take the case of Dipa Karmakar, one of India’s most honored and awarded athletes. Literally, she didn’t have a foot to stand on when she began her gymnastic training. Karmakar did not have an arch in her feet. She had to develop one through extensive training and physical exercises. She worked endlessly to rebuild her body and to fine-tune her mind. 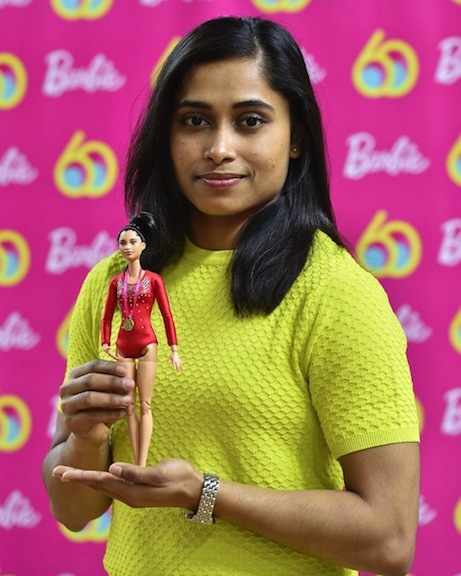 The 2019 Shero doll class is an inspiring one. The women have all accomplished incredible goals in their competitive fields, and many have gone on to pave new roads after their retirement. Lyasan Utiasheva garnered tons of medals during her rhythmic-gymnastic career. When she decided to bid the sports world goodbye, she set new parameters for herself. Today, after enjoying a career as a TV host in Russia, Utiasheva is now a well-known philanthropist.

Making her mark as a businesswoman and a trailblazer, Utiasheva has founded the online project Sila Voli, is an ambassador to the 2018 FIFA World Cup, and is the mother of two children. I guess this 2019 Shero doll has managed to have it all. 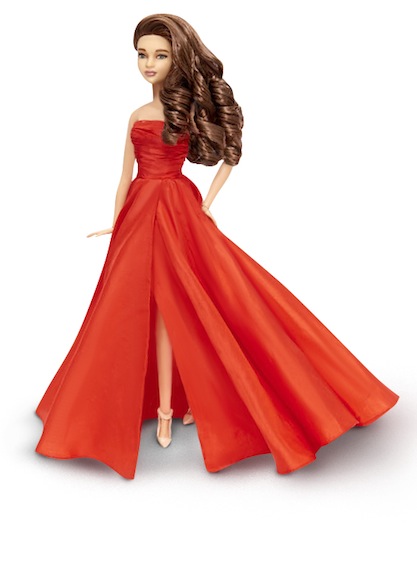 In fact, all of these dolls make women examine what exactly is a limitation, what defines a challenge, and what is worth striving toward. The onetime mistakenly described “weaker sex” has proven they have strength to spare. 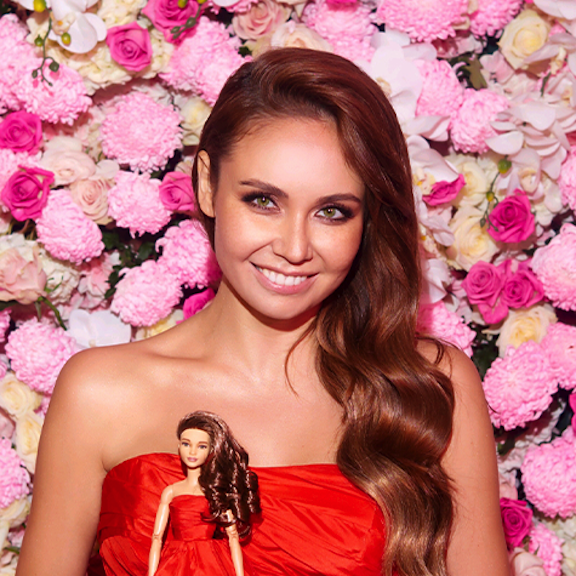 For that, we want to thank Mattel and this one-of-a-kind doll Shero program. These athletic dolls speak volumes about female empowerment and society’s shifting viewpoints. Both Barbie and Ken are cheering from the sidelines. 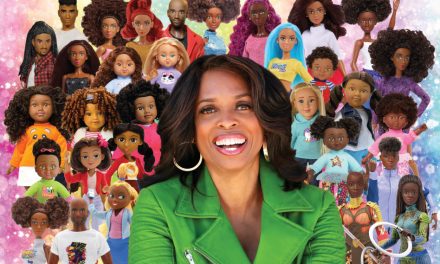 Forever Young: We have multiple Snow White dolls but no Betty Whites. Are we afraid to grow old?