The other day, I was talking with a friend of mine, who asked quite simply, “Why are there no tomboy dolls?” 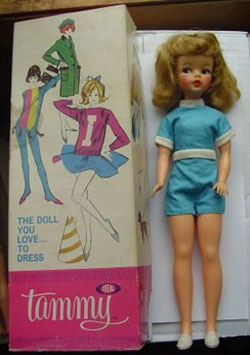 That question immediately prompted me to recite a litany of dolls that displayed so-called tomboy traits. “Well, there’s Skooter,” I said, referencing the flaxen-haired, freckle-faced friend of Skipper. “And there’s Midge,” I rattled off, mentioning the red-haired, rosy-cheeked, freckle-faced pal of Barbie. “Why, there’s also Tammy,” I stated, thinking she used to come with a tennis ensemble and a one-piece exercising unitard, “and, of course, there is . . . well, some kind of cowgirl doll from Alexander, I’m sure. You know, a ‘Wendy Loves to Rustle and Rope’—something like that.”

After proving my point—sort of—I began to think about the dolls that I pegged as “tomboys.” Were they tomboys or were they just sidekicks? It seems that in the doll universe, the laws of the “chick flick” clichés rule the roost.

Just as the lead actress in a dopey rom-com—Meg Ryan from the’80s, Sandra Bullock from the ’90s, and Katherine Heigl in the new 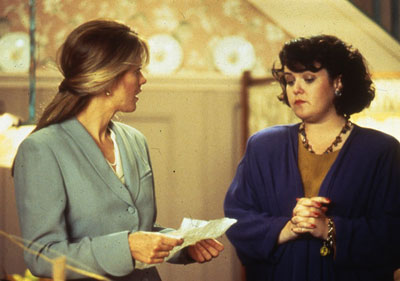 millennium—always has a loyal, less attractive best friend; so, too, do our fashion dolls. It’s the “fashion” to pair the more attractive, more stunning bit of vinyl with a less comely clump of clay! (And freckles seem to be the red flag for supporting-player status.)

Are these dolls—because they are not the major players in their series—tomboys? Is that making an odd assumption about what a tomboy is? And, more to the point, whether or not a “tomboy” will play with dolls at all?

My daughter, Jane, is definitely a tomboy. She’s seven years old, and she delights in tumbling around, improvising karate moves, and fighting warlocks and wizards. (She is a Harry Potter–phile.) When she’s not busy engaging in battle on her own, she acts out deeds of derring-do with her dolls: three pint-sized Alexander dolls, courtesy of a Happy Meal, are D’Artagnan, Milady de Winter, and Constance from “The Three Musketeers.” What can I tell you? She’s old school! 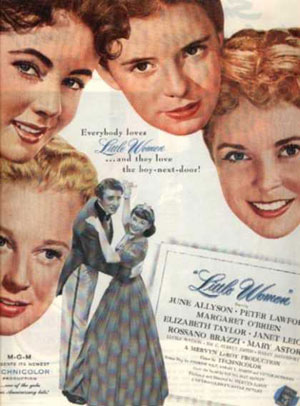 When we settled down to watch “Little Women” together—God bless Turner Classics and TiVo—I explained how the four March sisters were all different but alike in their love for one another. Obviously, she was the most taken with Jo. Who wouldn’t be? Whether she is enacted by Kate Hepburn, June Allyson, or Winona Ryder, the very dramatic and very headstrong Jo is the heart and the soul and the voice of the piece.

Seeing how smitten Jane was with the Civil War chestnut, I told her that I had Little Women dolls tucked away—an entire set of the family done in porcelain, even including the sensible, patient Marmee. Inspired by how Jane was able to sit down and watch the whole movie, I went and dug out my Little Women quintet.

I brought them to her, and she wisely said, “Why is Jo so still?”

“I know that,” Jane replied, exasperated that I would be so cuckoo to suggest otherwise. “But why does she look just like all of her other sisters. Why is she so neat and pretty? Why isn’t she like in the movie?”

And then Jane launched into diagramming how she would have sculpted and costumed a Jo doll: embellishing her with untamed tresses, a 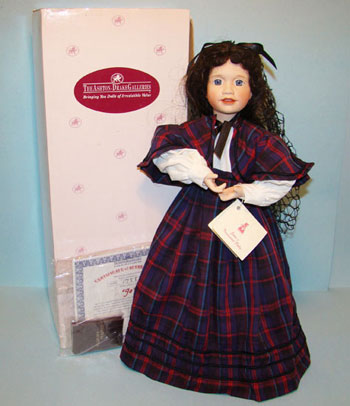 long cape, a swooping hat with a wobbling feather. She would have made Jo in the likeness of when she is acting out one of her dreadful, melodramatic plays; or when she has her hair shorn to earn some much-needed money for her beloved mother’s train fare, when their father falls ill.

There are so many flashy scenes that showcase Jo’s larger-than-life personality that Jane was disappointed in how “pretty” and “ordinary” she looked.

And I imagine that is the guiding principle in making dolls for the little-girl market (and occasionally the grown-up one too): keep them pretty and keep them sweet and keep them non-controversial.

Girls who were once pegged as “tomboys,” preferring to toss a ball or scale a wall as compared to hosting tea parties and feeding make-believe babies, are probably so commonplace these days that the nomenclature of “tomboy” will soon be a charming word from the past: like the three s’s—“schoolmarm” and “spinster” and “stenographer.”

Young, healthy girls are encouraged now to play sports—more so than to play dolls. Maybe a way to blend the two worlds is to create wholesome, clean-cut, fresh-faced, well-accessorized, realistic tomboy dolls.

The Cabbage Patch Kids allow little girls to choose dolls that skateboard or ride horses or excel at soccer, but these dolls don’t really attain the “realistic” badge of honor. Are there dolls out there that aren’t Kim Kardashian lite and aren’t CPK comical? A Bratz doll that figure-skates is a nice step forward, but her collagen-inspired lips and butt-length raven hair send a mixed message to young girls. Be active, wear hiking boots, but be booty-licious while 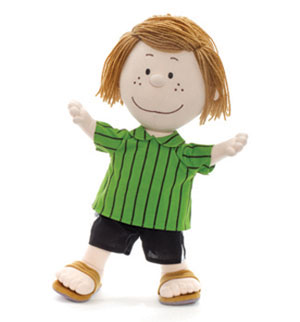 For all the little girls out there who like to expand their imagination and who like to play heroic and sweeping sagas with their dolls, there is a real niche available for a doll who can stand up to their dreams and to their demands.

What do you think? Are there dolls that embody athletic, active, and real girls out there? Ones that can be handled and played with and fit in a regulation-size doll house? We know they are out there. Channel your inner Peppermint Patty, exercise your thoughts, and windmill-pitch your suggestion for true tomboys!