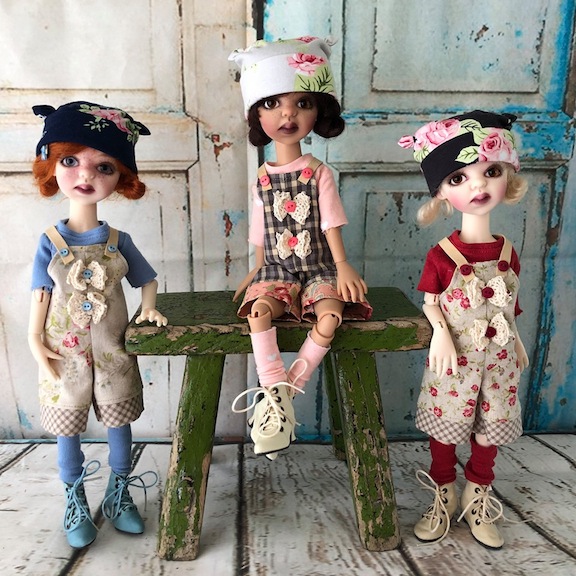 The mark of true artists is that their works reflect their personal sentiments combined with public empathy. Artists are able to create pieces that mirror their internal feelings. However, they release their own emotions in forms that are relatable and desirable. An artist is able to produce artwork that speaks through them and to you. In the doll world, artists are challenged to create lifelike characters that mimic human expressions and behaviors. Kimberly Lasher is an artist who coaxes forth dolls that are very realistic and also very Gothic. Her dolls embody real-life historical figures and literary heroines, sometimes with a surreal twist. Lasher’s dolls are both cutting edge and effortlessly cute. 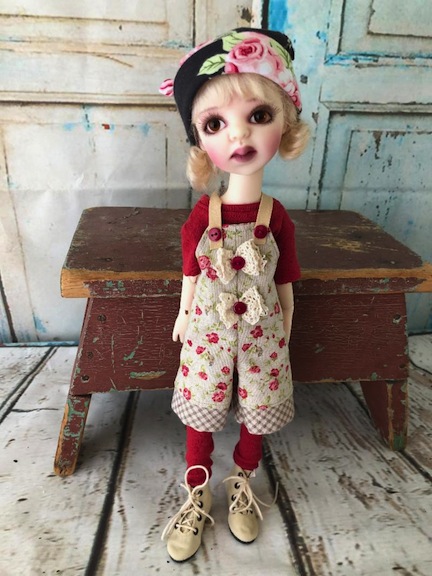 Artist proofs of the Nora doll were offered for sale by Kimberly Lasher.

Kimberly Lasher’s dolls were on my mind this month for a few reasons. First, I received a heads-up about purchasing the artist proof version of her Nora doll. The truly sweet character wears a mohair blond wig, has glass eyes, and boasts a face-up by Lasher. If collectors craved freckles, Lasher was there to provide those special skin dots. 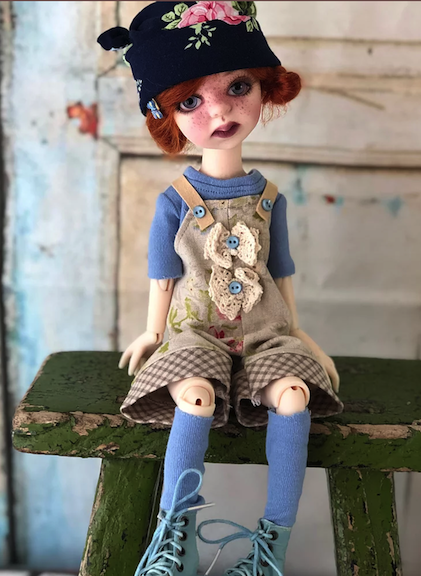 The Nora dolls could be bought in full sets (complete sets by Karen Kinyon). They look fashionable and relatable.

Prior to the artist proof sale, Kimberly Lasher’s studio had e-mailed me a sneak peek about the three versions of Nora. Available in different skin tones, the Nora dolls were clad in Boho-chic costumes or were sold as basic dolls. The option was up to the buyer. 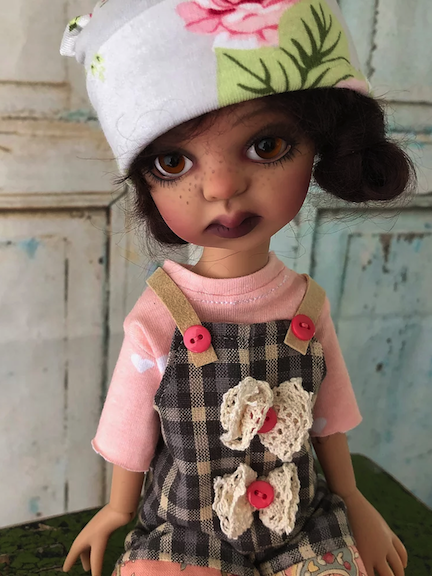 Freckles are optional! Kimberly Lasher gives her collectors a choice regarding that final face-up perk.

That’s what is so unique about the Lasher Studios characters. The dolls are able to look as if they’ve emerged from a contemporary fashion magazine, runaways from a stylish runway session. They have a very comfortable and playful look to them. With rompers and leggings, high-top shoes and slouched hats, the Nora dolls and other Kimberly Lasher dolls all appear as if they are GAP kids on an extended lunch break. They’re fashionable, but still relatable. These dolls remind adult collectors of their own children and grandchildren. 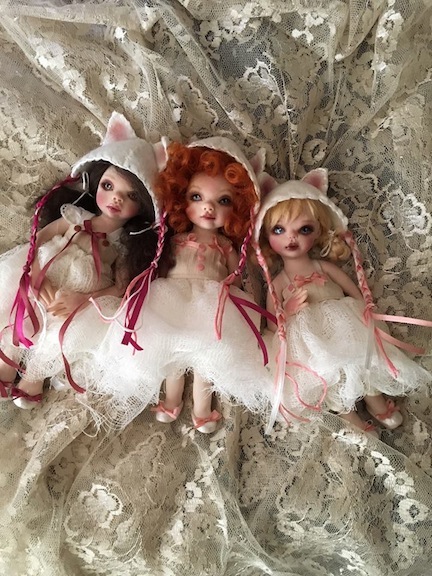 Beyond her dolls that blend lifelike looks with “look at me” vibes, Kimberly Lasher is feted for her fantasy creations. Her imaginary characters run the gamut of fairies to ghosts, eerie to ethereal. They also encompass dolls that are just plain cute. On August 8, my Facebook friends were flooding my timeline with International Cat Day photos. Okay, I admit it; I joined in the feline fun, too. But then, suddenly, I thought of Kimberly Lasher. I recollected her truly adorable 7-inch Kitty Cat dolls. 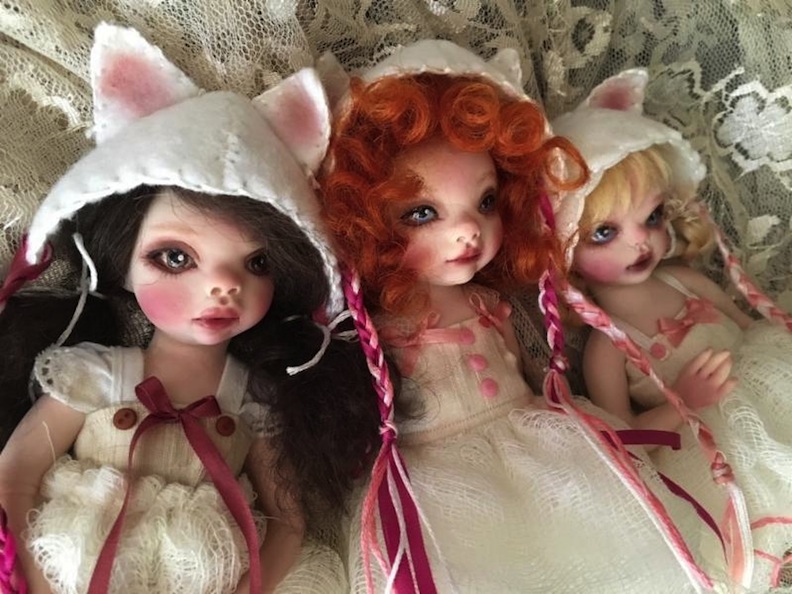 Katherine, Kitty, and Kit Cat were a trio of hand-sculpted polymer clay dolls. Boasting mohair wigs and wool felt hats, the three tiny sweethearts wore silk dresses and had painted eyes. Each one seemed like a one-of-a-kind piece of art. These Kimberly Lasher dolls definitely straddled that interesting hybrid of humanity and anime art. I could easily imagine these dolls as characters in a Japanese comic book or cartoon akin to “Sailor Moon.” 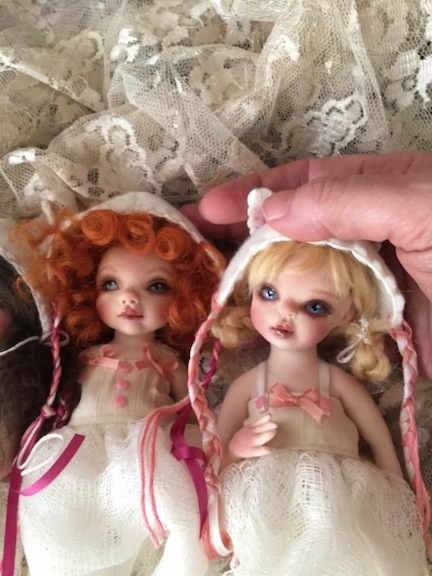 The Kitty Cats can easily fit in one’s hands. They are only 7 inches tall.

Over the years, I’ve been fortunate to interview the Michigan-based artist. Her life has been filled with personal adventures and an adventurous professional spirit. After receiving her degree from the Kendall College of Art and Design, Kimberly worked as a graphic designer in her home state. In 1989, though, she packed up her belongings and headed to Europe. She settled in Paris and worked for a doll and marionette shop. Residing in the City of Lights, Kimberly Lasher painted and designed dolls. It was an illuminating moment for the young woman. 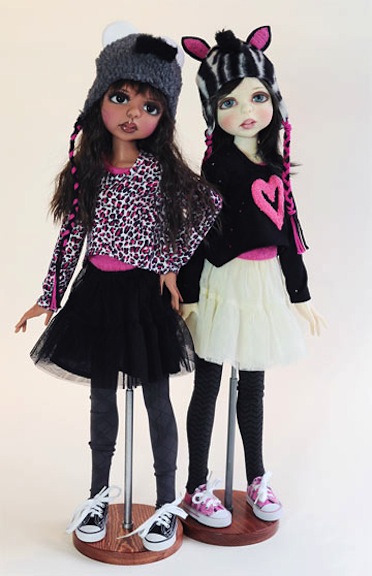 Eden and Eryka are two Kimberly Lasher dolls that were featured at the Dollery.

As a child, she had sewed and crocheted clothing and accessories for her Barbie dolls. Now, she was working in a foreign country, and her childlike pastimes were reaping sophisticated benefits. Lasher had her eyes opened to the realization that dolls are works of art, and purchasers honor their uniqueness and individuality. Upon her return to the United States, Kimberly decided to sculpt her own one-of-a-kind dolls. She turned to Fimo polymer clay as her medium, and was satisfied that she just might have found her niche. 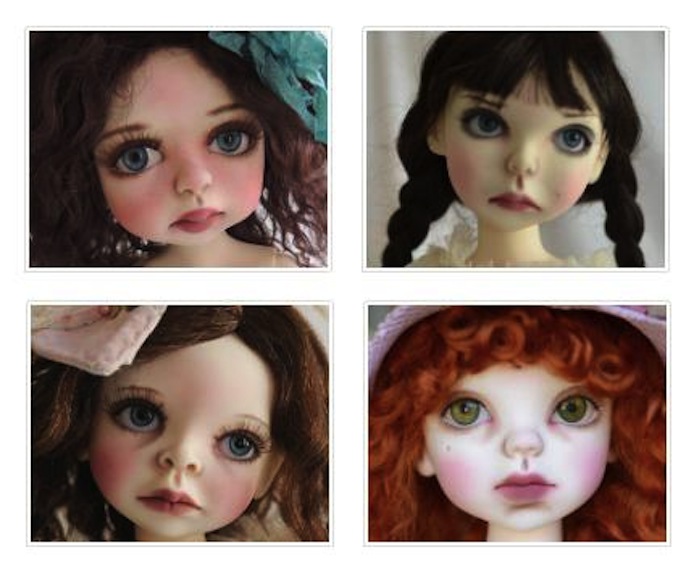 The many faceups of Kimberly Lasher: her dolls are mesmerizing and enchanting.

Before she committed 100% to the doll artist lifestyle, she kept her other art-related gigs. Kimberly Lasher worked in design firms and advertising agencies; she did her art dolls as a side passion. After she was married and had children, she was once again surrounded by the power of dolls. This time, their allure held her tight. “I thought I would make dolls while my own kids were asleep. It was something I knew I could do. I felt it was just a matter of making the time, and making the commitment,” she told me. 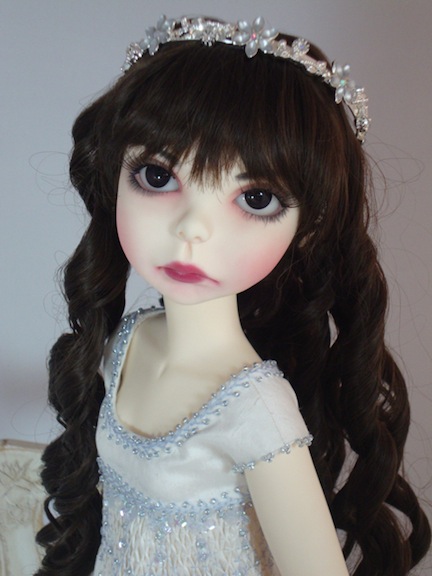 Juliet, as seen at the Dollery

When Lasher Studios gradually grew in size and reputation, Kimberly was overjoyed. “I had hoped that I could work at home and make my own hours. That was the extent of the dream, but then it changed. I saw that I could have a studio. Soon I thought, I could have employees. I could be a doll artist and run a business! It was beyond my dreams,” Lasher shared over the years. 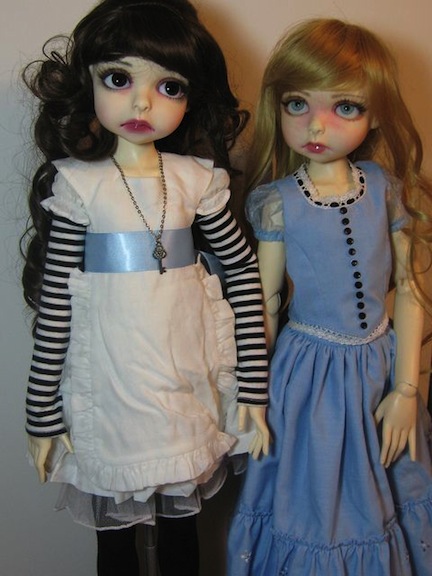 Alice in Wonderland dolls became a staple of doll studios in the early to mid 2000s. The book celebrated its 150th anniversary in 2015. Kimberly Lasher made different Alice varieties for specialty stores, like the Toy Shoppe. 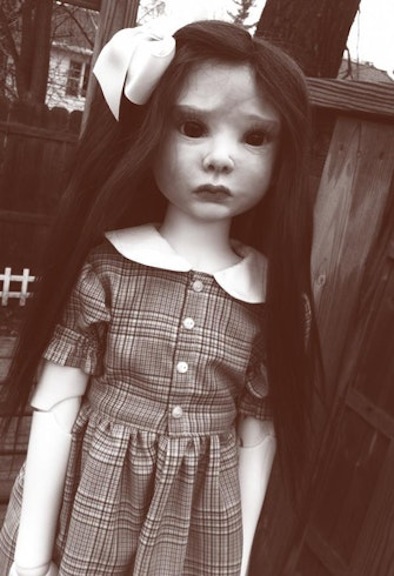 One of Lasher’s most mesmerizing pieces was a sobering and painstaking re-creation of Anne Frank’s attic. The artist replicated the enclosed space, which came to fame through Anne’s literary legacy, her handwritten and heartfelt diary. The hiding spot that sheltered the frightened Jewish families during World War II was home to Anne, her sister, Margot, and their parents. Another doomed Jewish family, the Van Pels, arrived as well, along with their teen son, Peter. An eighth person, Fritz Pfeffer, also moved in, and met his sad fate.

Kimberly designed the attic and called it The Secret Annex, after the Franks’ description of it. Her installation measured 5 by 6 by 4 feet. Doll replicas of Anne, Margot, and Peter inhabited the carefully crafted set. The dolls were 30 inches tall, and featured 15 points of articulation. The dolls’ costuming is from 1940s vintage material, approximating how they might have dressed during their ordeal. Each of the dolls has human hair and hard-blown glass eyes. 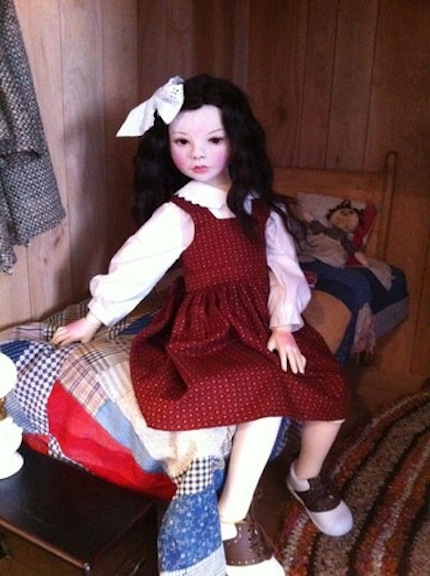 Anne and her sister, Margot, were two of the dolls that populated the Secret Annex installation.

Anne Frank, who is emblematic of the indomitable human spirit, would have been 90 years old this year, if she had lived. Discovered and then sent to a concentration camp, Anne never lived to see how her chronicle of daily life flourished and inspired. She passed away, most likely from typhus, at age 15, a few months shy of her “Sweet 16th.” Her diary has become a touchstone for immeasurable courage in the face of unspeakable evil. Additionally, her writing has showcased the human capacity to remain optimistic and forgiving. Her diary has expanded beyond one girl’s limited life. It is a book that belongs to the ages.

Born in 1929, Anne would be an important elder stateswoman today. She would be an eyewitness to atrocities and perhaps an ambassador for how to overcome, prevent, but never forget, the holocaust … if she had survived. 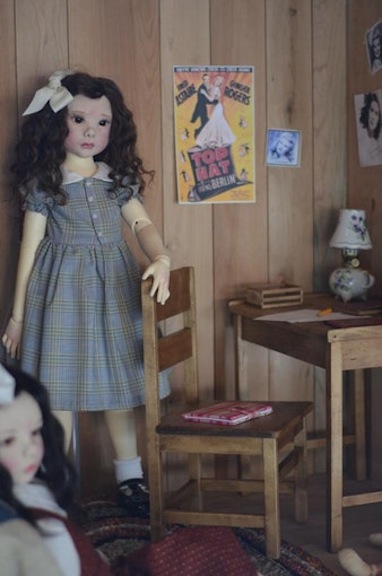 Kimberly Lasher’s 3-D remembrance of Anne Frank’s bravery was an entry for Michigan State’s 2011 ArtPrize. Lasher decorated the room with artifacts that mirrored Anne’s personal effects and personality. Her father, Otto, had snuck Anne’s books, some photos, and posters of movie stars to their secret hiding place. He wanted to make this horrific experience into some kind of homey setting. As they lived together for nearly two years, Anne matured as a diarist, a historian, a journalist, and as a young woman.

Kimberly Lasher evoked all of that with her poignant and poetic testament to a teenage girl’s clear-eyed look at her reduced circumstances. Still, Anne Frank remained principled, optimistic, and a believer in the goodness of humanity. 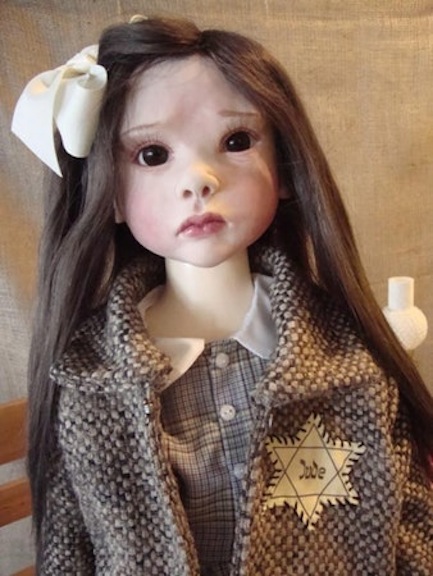 Kimberly Lasher’s work touches on Anne’s chord of kindness and unbreakable strength. The finished piece was a testament to Lasher’s personal talents and the deep respect she holds for her subject’s strength and stoicism. It’s as relevant today as it was in 2011 when Lasher unveiled it, and in 1942 through 1944 when Anne actually resided in it. The Secret Annex is an installation that will always grow in stature and significance. 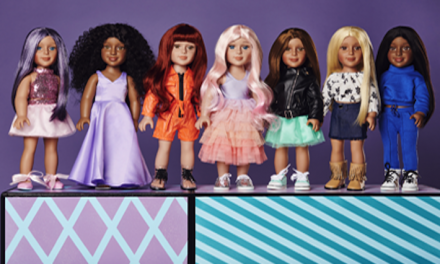 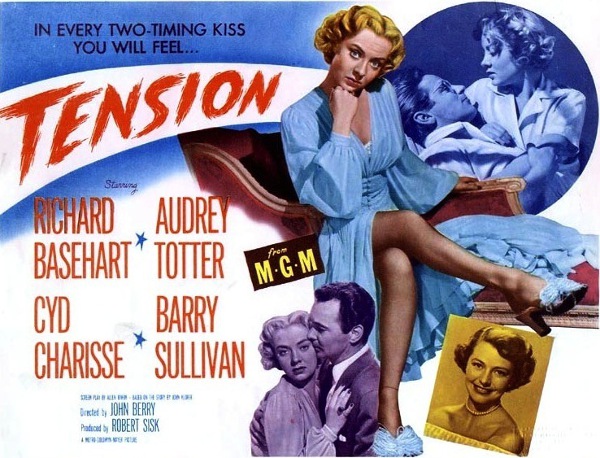