When Natalie Wood was a child star, she figured among one of the busiest and most prolific of actresses. Deemed a natural talent, directors vied to cast her in their films. Ironically, while she was reaping large paychecks — enough to support her family — Natalie herself was not very impressed. “I would have done the roles for armloads of dolls,” she wryly observed years later. Forget about huge dollar amounts, little Natalie was passionate about baby dolls and playing dress-up. That’s why it’s rather sad that there is no Natalie Wood Collection of Hollywood celebrity dolls. 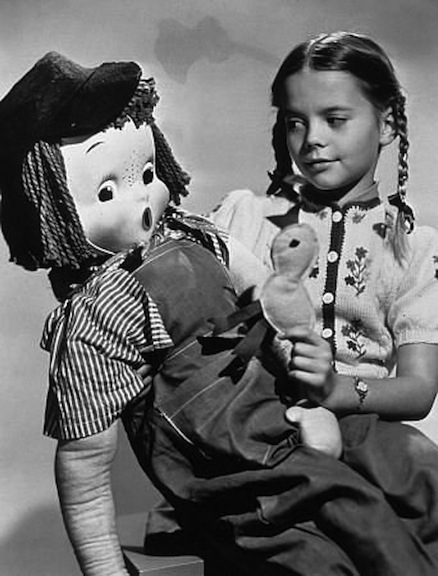 As an 8-year-old, Natalie poses with dolls for “Miracle on 34th Street,” a Christmas classic

With a career that spanned decades—active from 1943 to 1981—she left behind a legacy of gorgeous costumes, elaborate hairstyles, and characters that continue to touch fans to this day. Even more surprising is that if Wood had not died unexpectedly, at age 43, she would be 80 years old today. That is a sobering thought about an actress who always encompassed youth and vitality. 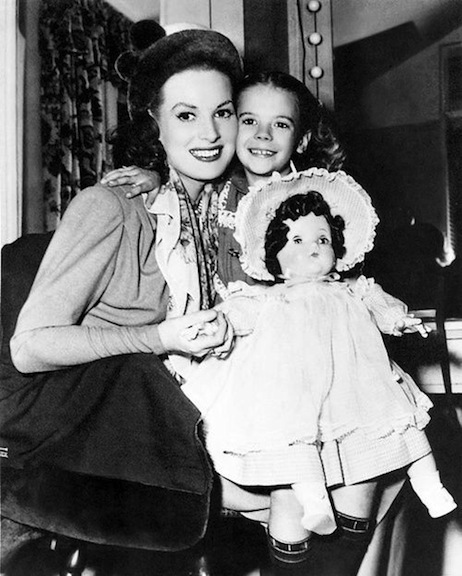 Maureen O’Hara, with co-star Natalie, on the set of “Miracle on 34th Street.” Natalie kept the baby doll!

Born to immigrant parents — Russian and Ukrainian — young Natalie grew up in California. She wasn’t trained in acting, but her mother (who grew to be a rather domineering stage mother — a relationship she visited in “Gypsy”) believed that Natalie had an expressive face and eyes that were huge and luminous. Her mother, Maria, would bring Natalie to the movies and perch her on her lap. She’d point out what the performers were doing on the screen, and then ask Natalie to re-enact it at home. It was nearly always spot-on. Not bad for a 3-year-old! 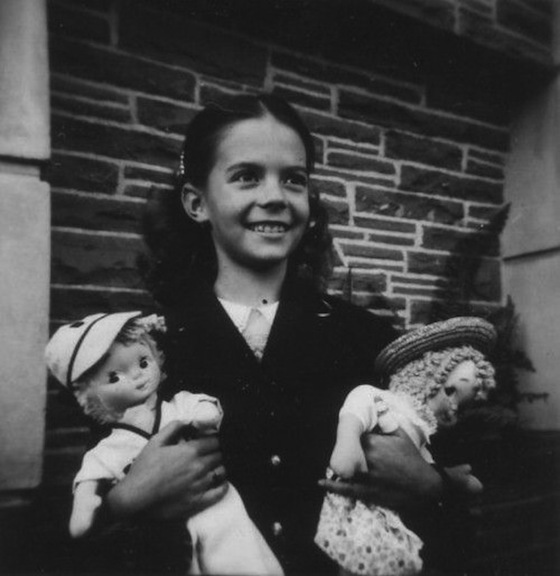 Natalie carrying two of her personal dolls to her dressing room

The movies seemed so real to the young Natalie that she would wave hello and goodbye to the actors on the screen. Her mom would whisper for her to smile at them, and she would, believing that the flickering forms were watching her as she viewed them. 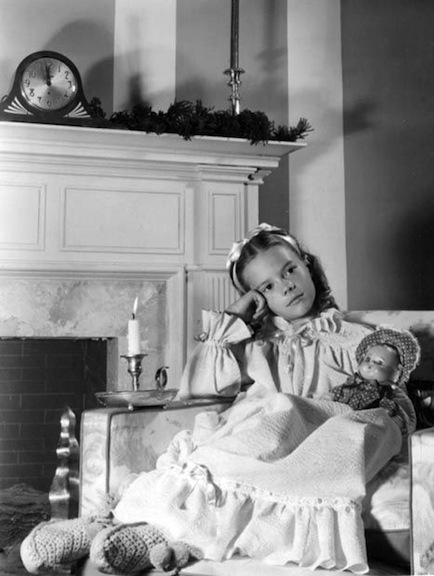 At the age of 5, Natalie went from putting on in-home re-creations to actually being in the movies. Her ascension as an in-demand performer was rapid, and Natalie Wood became an actress who excelled in playing wise, composed, intellectual children. Her role as Susan in “Miracle on 34th Street” was recognized as almost supernatural in how she embodied a cynical and world-weary child. She was only 8 years old when she captured that crucial part, and she managed to incorporate the correct amount of jaded sophistication and redeemable juvenile wholesomeness. That dichotomy was something she was able to rely upon throughout the rest of her career. Wood was the perfect actress to play high-strung or anxious women who were placed into overwhelming situations. They were thrust out of their comfort zones and had to struggle to find their place in the world: remaining vulnerable but strong enough to punch back at their oppressors. 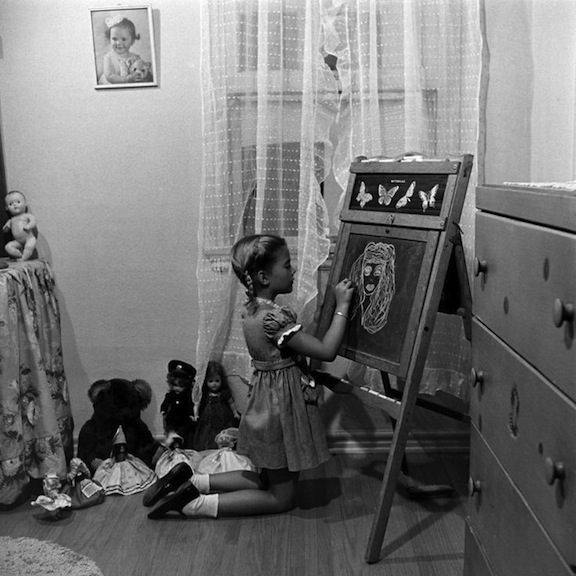 While she was making her movies as a child, Natalie was attempting to live a life as normal as a Hollywood child veteran can be. She had a bedroom filled with dolls and stuffed animals, and she was encouraged to express her artistic talent on a blackboard and easel. Knowing that celebrities can suffer crack-ups, as F. Scott Fitzgerald named them, her parents attempted to maintain as normal and as regular a home life as they were able. (When her baby sister, Lana, came around, she, too, eventually became a child actress. Playing imaginary scenarios and making make-believe come true, was the family’s stock in trade.) 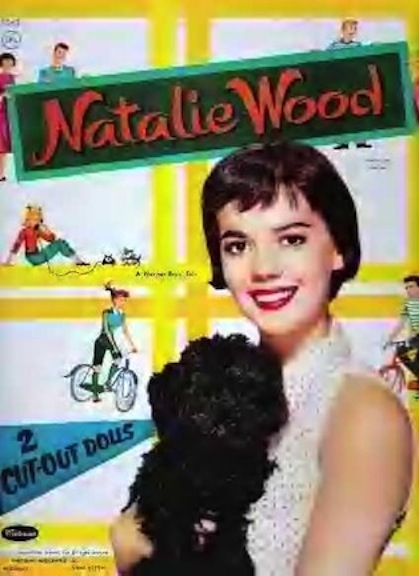 Natalie Wood as a paper doll, published in 1957

Natalie gravitated to her nursery and collection of dolls for as long as she was able. However, when she became a teenager, “sweet sixteen,” in fact, she gravitated away from the dolls and into the world of motorcycles, hot rods, and Hollywood heartthrobs. She befriended James Dean, her co-star in “Rebel Without a Cause,” but dated her fellow actor, Dennis Hopper, who also had a featured role in the film. Hopper was known as a “wild child,” and their hook-up was contrary to what the studio wanted Wood to be associated with. She would go out on arranged dates with matinee idol Tab Hunter, who was a closeted gay man and a close confidant of Natalie’s. They’d stroll into an event together, pose for the paparazzi, and then she’d leave him at the front door while she snuck out into the parking lot to meet Hopper or Robert Wagner or any other handsome actor who caught her fancy. 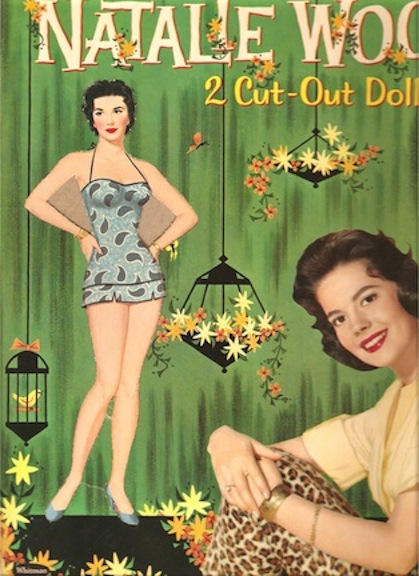 Leaving behind her dolls for dalliances with hunks was what Natalie did in her teenage years. She was living fast, because she feared her career was going to implode. She didn’t know if she would make that transition from cute child star to respected adult thespian. Luckily for Wood, she did. She was nominated for an Oscar for her supporting role in “Rebel,” which she completed at age 17 in 1955. She would go on to receive two more Academy Award nods before the age of 25: Best Actress citations, but no win, for “Splendor in the Grass” at age 21 and “Love with the Proper Stranger,” at 24.

In full rag-doll makeup, Natalie questions her role as a manipulated doll in “Inside Daisy Clover”

In 1965, Natalie had the role of a lifetime in “Inside Daisy Clover,” which examines how the movie industry can create a superstar while tearing down reality and humanity. Her character Daisy is launched into stardom while every aspect of her real life is orchestrated, observed, manipulated, and machinated. It could have been a journal page from Wood’s own personal diary. The movie has loads of musical numbers, and many of the scenes seem like they were outtakes from a Judy Garland extravaganza. Garland, like Wood, also grew up — and grew up too soon, it seemed — in front of a camera. Wood danced in the role of Daisy and did her own singing. However, producers felt her vocals were too brassy and off-key. They dubbed her with singer Jackie Ward’s voice after the film wrapped. (Jackie Ward also sang for some members of the Partridge Family when they couldn’t hit the required notes.) 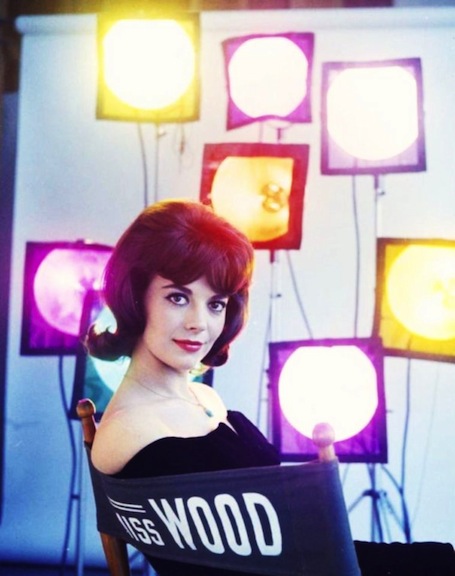 Miss Wood on the set, where she felt simultaneously safe and insecure

Playing Daisy Clover, Natalie has a part that fits her like a second skin. She embodies an actress who is at odds with her public image. Her private life — her true identity — is not what the executives would find acceptable. In a memorable part of the movie, she is dressed like a rag doll. It perfectly invokes how so many leading ladies were led around by their publicists, directors, managers, agents, and — with a tip of the hat to Kris Jenner — their mom-agers. Natalie, who was always positioned with dolls in her publicity photos, knew what it was like to be treated like a fragile porcelain collectible. 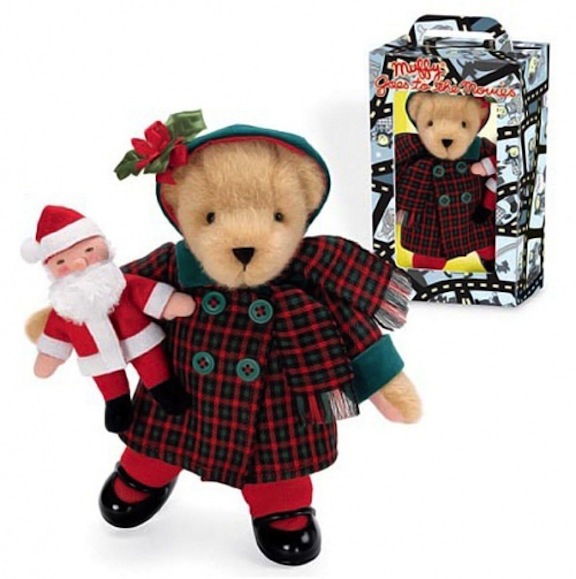 Natalie understood that she was boxed in — having to do what she was told and encouraged to hide any off-set bad behavior. She didn’t want to make her family angry, because they relied on her income even after she was grown and had moved away. To that end, Wood permitted her likeness to be used as the basis for paper dolls and for collector figurines. After her death, her estate licensed her likeness for collectible plates celebrating some of her iconic roles. 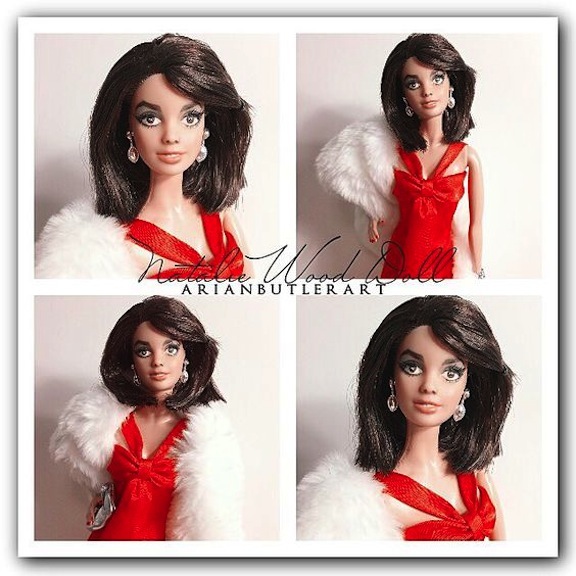 Seeing the number of different parts she grabbed — Maria in “West Side Story,” Gypsy Rose Lee in “Gypsy,” Alva in “This Property Is Condemned,” and Helen Gurley Brown in “Sex and the Single Girl” — it’s rather unbelievable that she hasn’t had her parts translated into a fashion-doll lineup. Whether she was in a bit of rom-com fluff like “Sex and the Single Girl,” which partially inspired the Renée Zellweger/Ewan McGregor comedy “Down with Love,” or a slapstick grand epic like “The Great Race,” she always looked impeccable and glamorous. Only 5 feet tall, though some biographers say she was more likely 4 feet 11 inches, she was every inch Hollywood royalty. 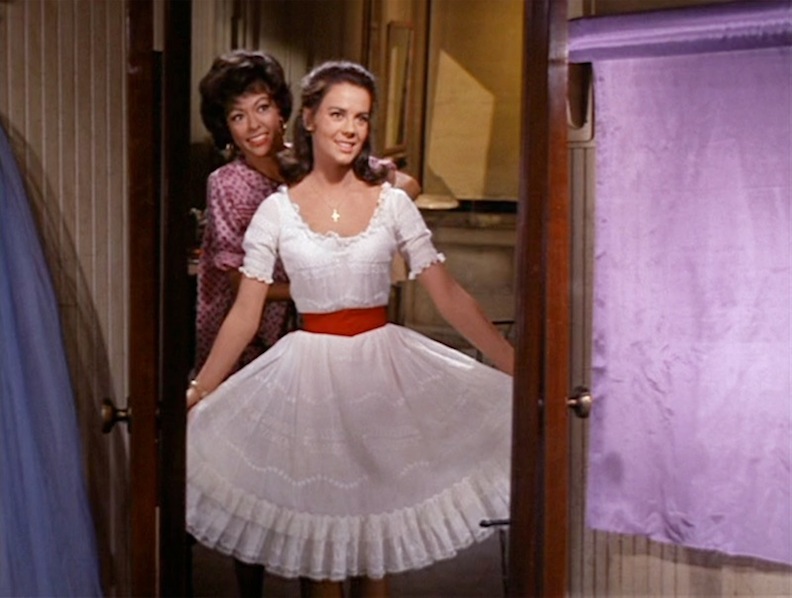 Natalie, with Rita Moreno, as the eternal ingenue in “West Side Story”

Her untimely death in 1981, and with rumors of foul play circling around her alleged drowning, Natalie Wood might be considered too hot to handle as a doll from a manufacturing company. Thankfully, repaint artists have loaned their talents to creating dolls in her likeness. 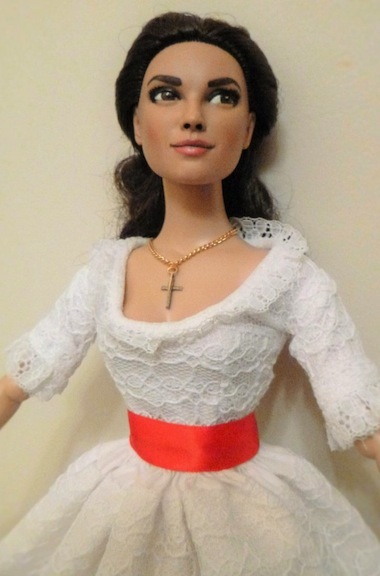 In that way, the legacy of this beautiful and doomed woman can live on, and her incandescent screen persona will never be snuffed out. She will remain alive and relevant for doll lovers, classic-film aficionados, and that definite celluloid cross-section where the two niche interests meet.