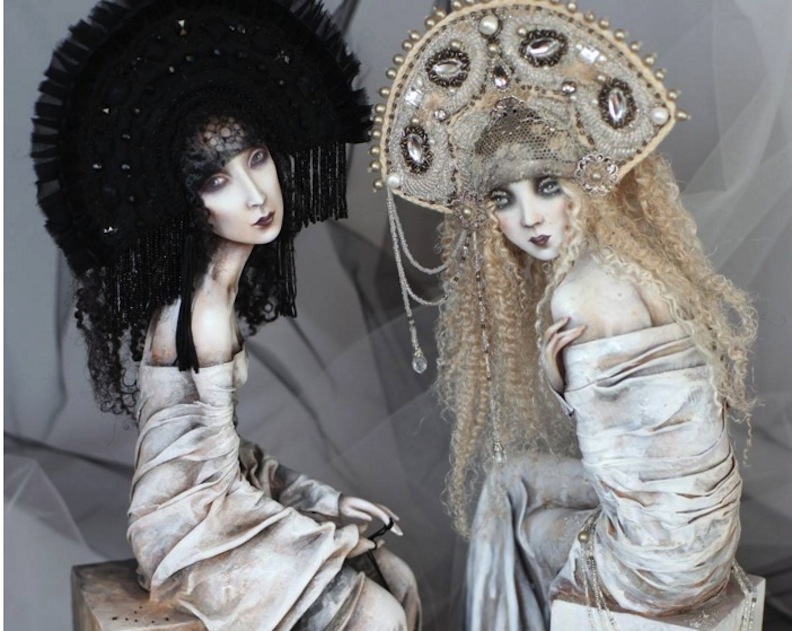 From 2016, Black and White Movie spotlights Anna Zueva’s fascination with film and dreams, dolls and drama.

Walt Disney was right — though maybe a tad misguided with that cloying theme song — but it is a small world, after all. Yes, social media has made it smaller. You can post a clever comment or a thumbs-up encouragement on Facebook, and then find yourself swamped with marriage proposals from Nigerian princes and other faraway “fortune hunters.” Yep, it is a small world, after all. Lithuanian-based doll artist Anna Zueva knows that universal truth for sure. 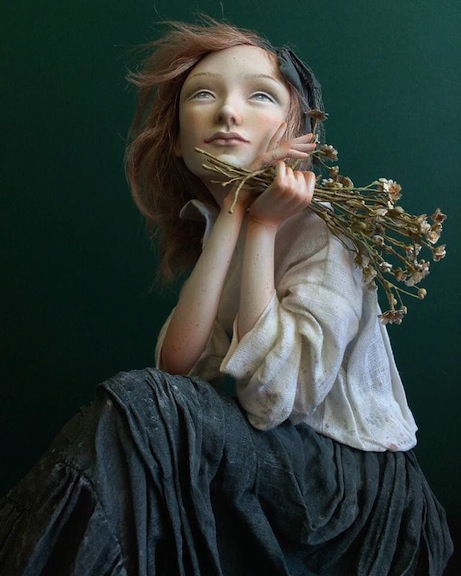 My Name Is Dream is one of Anna Zueva’s gorgeous, lyrical girls. The doll is mesmerizing.

Anna’s work chips away at national borders and territorial roadblocks. Instead, it focuses on what all of us have in common. It explores empathetic expressions, heartfelt gestures, and dramatic intensity. If artists were able to sculpt with their souls and their sympathy, their dolls would embody their inner beings. Anna Zueva’s dolls are pretty close to showcasing what is ticking beneath her surface. They have a certain X factor, in their emotional x-ray capacity. 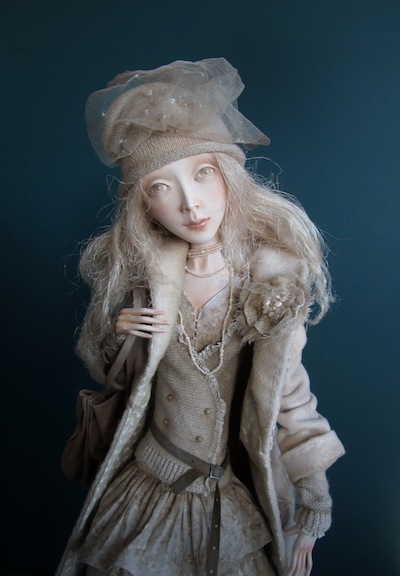 One of My Friends is a stunning heroine sculpted and costumed by Anna Zueva.

Anna Zueva knows more than a thing or two about the power of theatrical costuming and imposing posing. Skilled as a fashion designer, she immersed herself in the history of Russian theatrical costumes. Her studies have paid off beautifully, because Anna’s dolls seem to be telling tales with their faces, fabric choices, and intricate accessories. The doll designer has a rich background filled with artistic accomplishments and a respect for doll artistry as a recognizable art form. 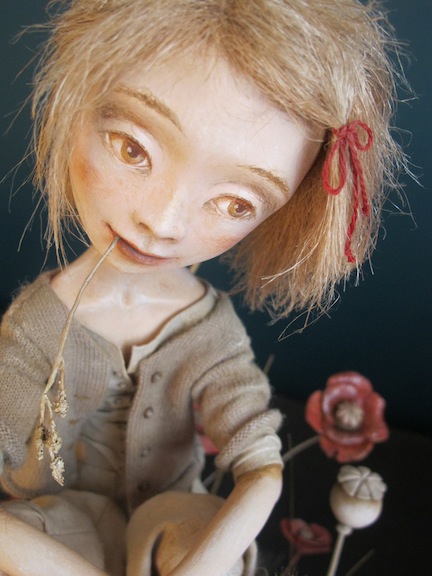 Poppies is a meditation on war and its aftermath. Zueva created the doll in 2015, the 100th anniversary of the poem “In Flanders Fields.”

Up until 2002, Anna was a successful children’s newspaper illustrator. She also made print designs, worked as an interior decorator, and as a theater set designer. She understood the power of a pulled-together visual vignette. That’s one of the reasons why Anna Zueva’s dolls are so relatable. It doesn’t matter where she resides physically. Her emotions as a doll artist have given her a global residency. She doesn’t mirror what is happening in her hometown of Vilnius. Rather, she reflects what is occurring in the world today, tomorrow, and for eternity. Her dolls are timeless. 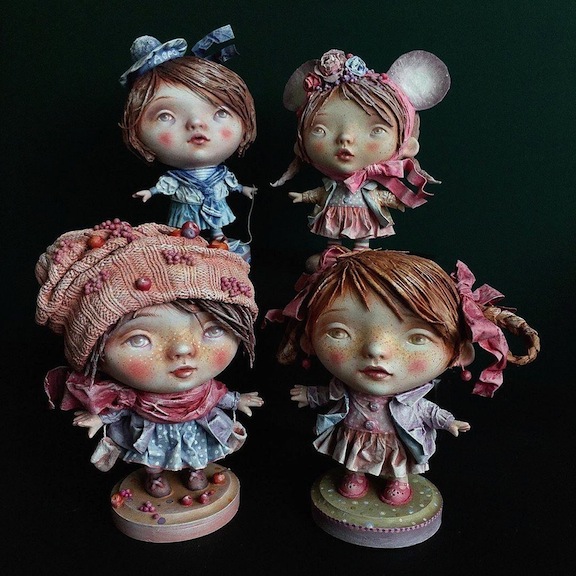 A member of the National Institute of American Doll Artists (NIADA) since 2013, Anna Zueva is an international treasure. Paper-clay dolls, some of which can stand nearly 2 feet tall, are her designated specialty. “I do all the dress tailoring and make every tiny detail. Each doll is usually a one-of-a-kind creation,” Anna has said. 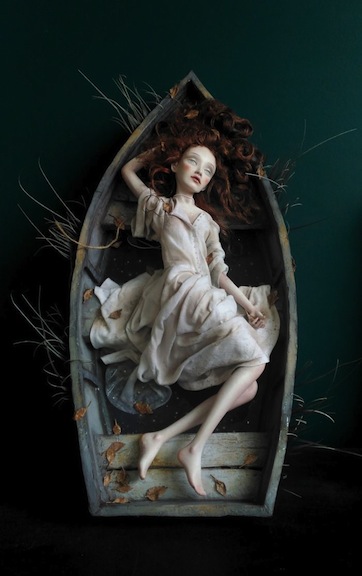 Like many collectors, Anna Zueva also has a gene for accumulating drawers of “stuff.” While doll fanciers find themselves browsing and buying dozens of dolls, Anna is a sucker for fabric and trim. “I collect any beautiful piece of fabric I see, even if I don’t know what to do with it at the moment,” she has shared. “As a result, my house is stuffed with costuming material.” 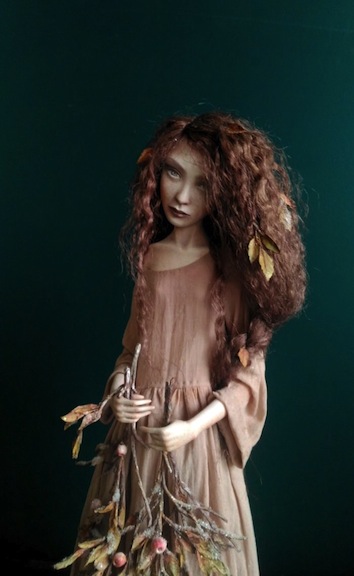 Measuring 22 inches, Autumn Insomnia is a stirring portrait. Anna Zueva is able to mine her most private visions.

It’s smart that Anna has that pack-rat mindset in her DNA. The artist is never without inspiration and the raw materials needed to make her visions come true. In her mission statement, she talks lovingly about her compulsion to create and to design: “I always find it more interesting to create new images than to repeat the old ones because I have no lack of ideas. In my stream of inspiration, I can work 24 hours a day.” Even though that might be a bit of a boast, Anna Zueva probably doesn’t require a lot of sleep. While most of us need that precious REM for dreams, this artist dreams with her eyes wide open. 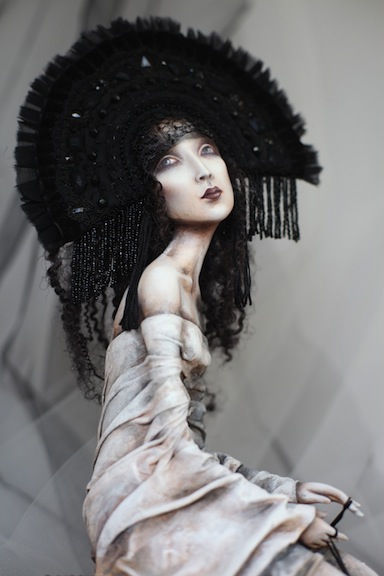 The Night Muse, one of the two characters featured in Anna Zueva’s Black and White Movie duo.

As she sculpts, the emerging dolls tell her how they want to look and appear. Influenced by books, plays, and films, she imbues her dolls with these storytelling devices. Anna Zueva is akin to a famous silent-movie director of decades gone by. Just like the stars of the pre-talkie era, her dolls have fierce faces and flexible expressions. They don’t need words to spin a yarn. Their bearing bares all! 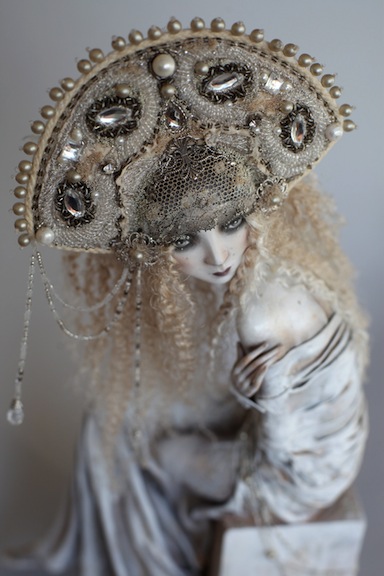 The Day Muse is part of Anna Zueva’s cinematic masterpiece. The two screen sirens are poignant and filled with pathos.

Exhibiting her work at galleries, competitions, and doll art venues, Anna has attracted a loyal following. Though maternally connected to her dolls — after all, she has birthed them in a real sense — Zueva creates them to be sold. A dreamer and an artist, Anna Zueva is also a realist. 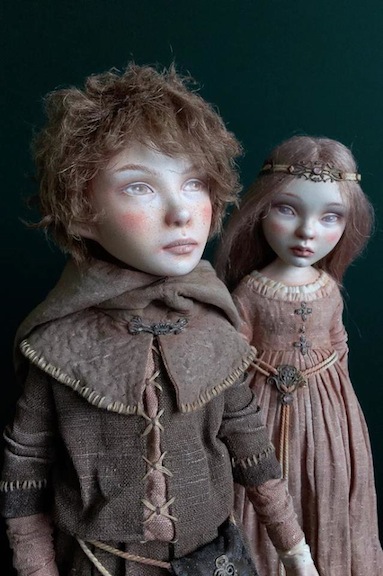 The tireless sculptor understands that one requires customers and commerce to underwrite the creative pursuits. “When the work is over, and I am satisfied with the result, I let them go,” she has written. “I enjoy thinking that my dolls are loved and people want to have them to look at them every day.” 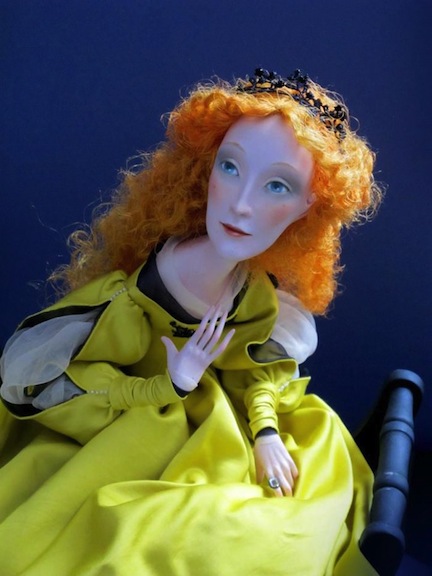 Anna Zueva tackles Shakespeare’s Sonnet 83 with this doll design: “I never saw that you did painting need …”

A teacher and an advocate for the arts, Anna Zueva is a fascinating player on the world stage. She has melded her own personal passions with her public persona. Her dolls are ambassadors from her wondrous, worldly imagination. They come to prance and trot and stand before us as emissaries from her private thoughts and her professional ambitions. They are peerless performers: seemingly acting out their own Chekhov tragedies, Voltaire comedies, or Shakespearean love stories. In Valley Girl speak, “they are totally Tolstoy!” 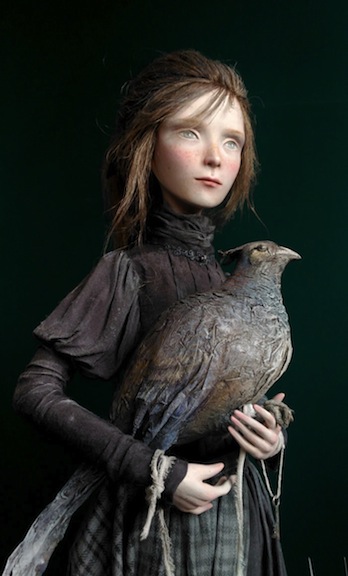 Tina and Bird is part of Anna Zueva’s Insomnia series.

I am so happy that I discovered Anna Zueva’s body of work via LinkedIn and her Facebook page. Her postings and her accomplishments are worth following and applauding. The dolls deserve a standing ovation of their own. Truly, Anna knows in her heart, and in her soul, how unique they are. “I love all of my dolls, without any exceptions, even if they are acting up,” she has posted. “I feel comfortable and cozy with them.” 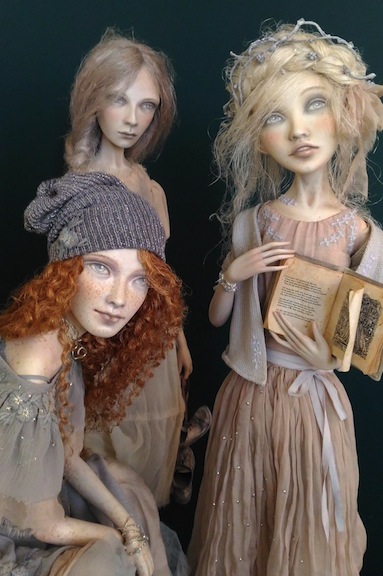 Like many a mother-and-daughter pair throughout history — or “Three Sisters” in the fabled Russian winter — Zueva doesn’t always get along with her brainchildren. “We argue at times, but I always remember all my girls lovingly. I miss some of them, too. They are so very different, with distinct personalities,” Anna Zueva has lamented. “Some are born easily and quickly, some not.” 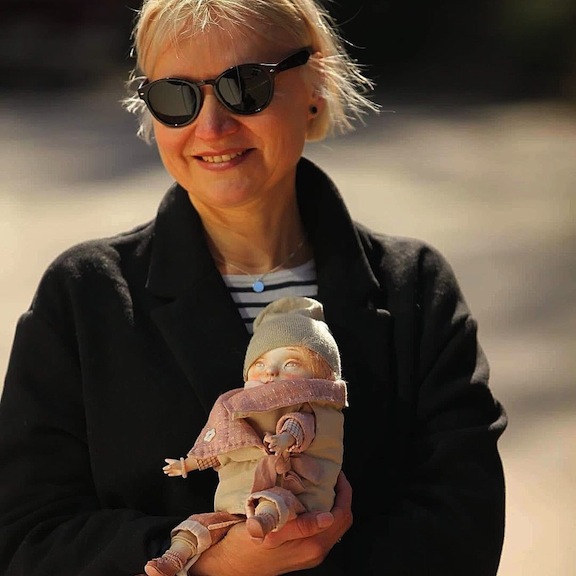 On her Instagram account, Anna Zueva posted that she took one of her new dolls, Polina, on a holiday getaway.

No matter the time line for their creations, the dolls of Anna Zueva are classic and timeless. The doll world is more opulent and more opinionated because of their arrivals. 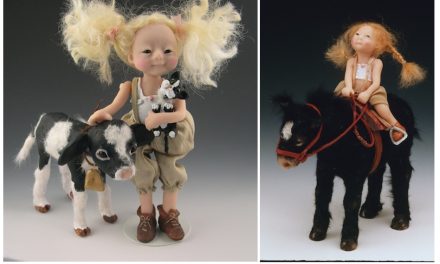