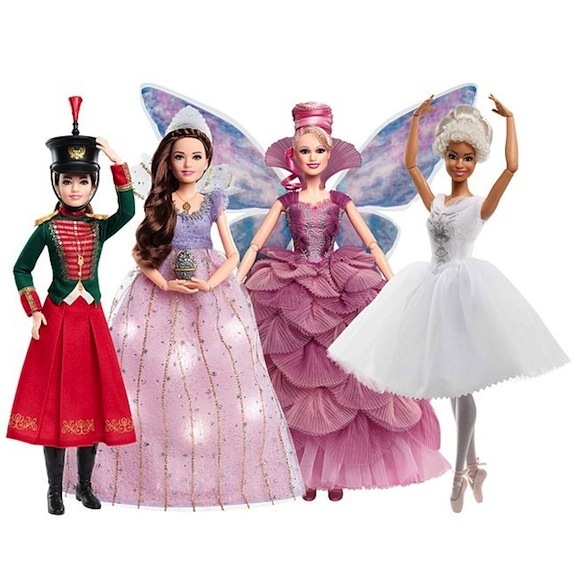 Mattel has debuted “The Nutcracker and the Four Realms” dolls. The quartet is based on the Disney film. The gift set is discounted on the Mattel Barbie site.

Many readers reached out to me after the Mary Poppins blog from last week. They shared their reminiscences about their own childhood infatuations with Mary and Bert, and their desire to join a dance troupe of chimney sweepers as they high-stepped across the rooftops of London. Like Bert says in the original, “Coo, what a sight!” But among the letters, there were also queries about what other Disney dolls are available from Mattel. Parents and grandparents are often at their wits’ end when it comes to buying suitable stocking stuffers or Hanukkah presents. Dolls are an easy go-to for girls and, in the case of movie tie-ins, for boys and adult film fans as well. Disney dolls are available from Mattel this holiday season, but some of the movie properties did not do “boffo box-office business,” as Variety magazine used to say. Case in point: “The Nutcracker and the Four Realms.” 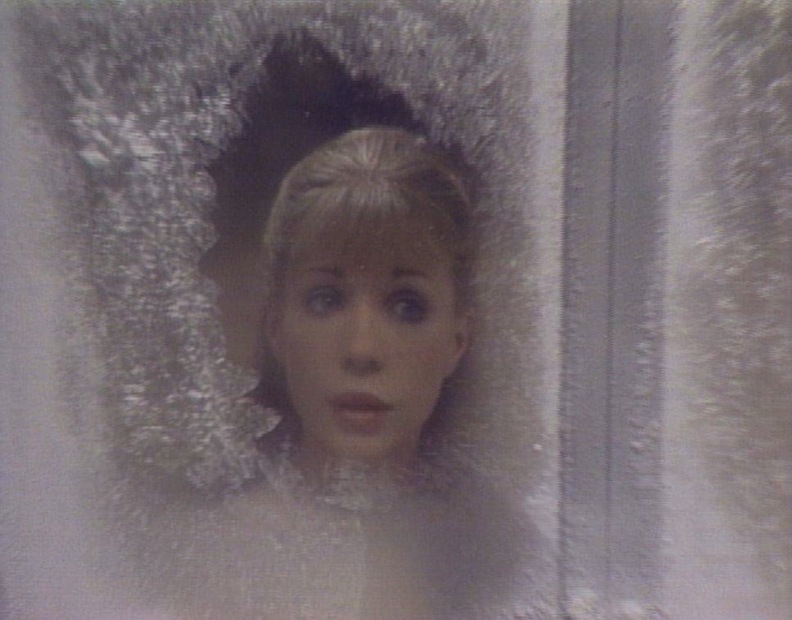 Gelsey Kirkland at the window, in Baryshnikov’s more adult version of “The Nutcracker.” (Courtesy of PBS/WGBH)

The new re-imagined musical “The Nutcracker and the Four Realms” has produced a bevy of beautiful Disney dolls. So many of us have seen the ballet version of “The Nutcracker” performed at our local community theaters, on TV, at larger state venues, and if you’re very lucky (and I was) the definitive version at New York City Ballet. The story of Clara’s evolution from innocence to maturity — over the course of a single night—is akin to Wendy’s temptation from the nursery by that charismatic, perpetual boy, Peter Pan. 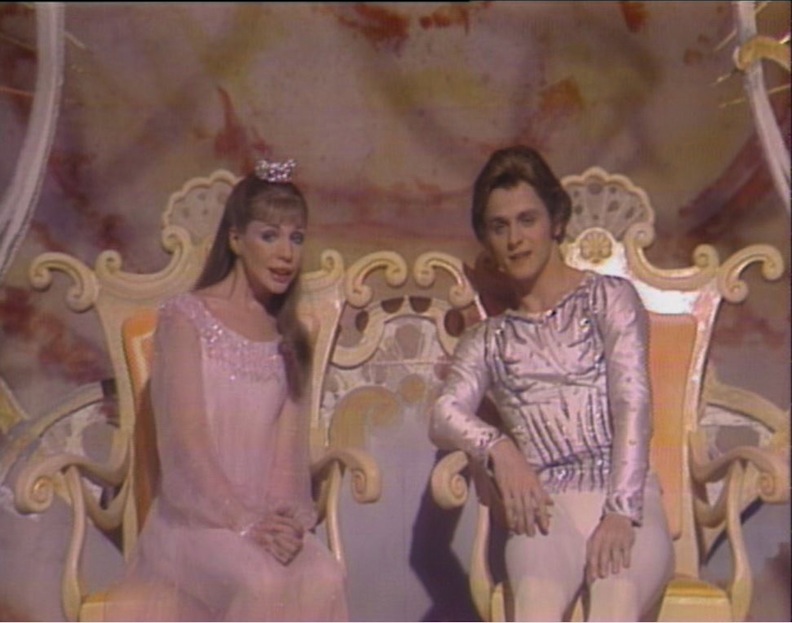 Onetime partners off-screen, as well as on, Kirkland and Baryshnikov shined together in his staging of “The Nutcracker.” (Courtesy PBS/WGBH)

I suppose the maturation of Clara, set against the whole nutcracker pageantry, was best explored in the Mikhail Baryshnikov and Gelsey Kirkland vehicle. It was filmed for television back in 1977, and the two romantic darlings of the ballet world turned this childhood favorite into a more psychological study of a young girl’s adolescent stirrings for romance, love, and even sex. It’s available on DVD for purchase, and Amazon is currently running it as part of their free Prime Member streaming service. 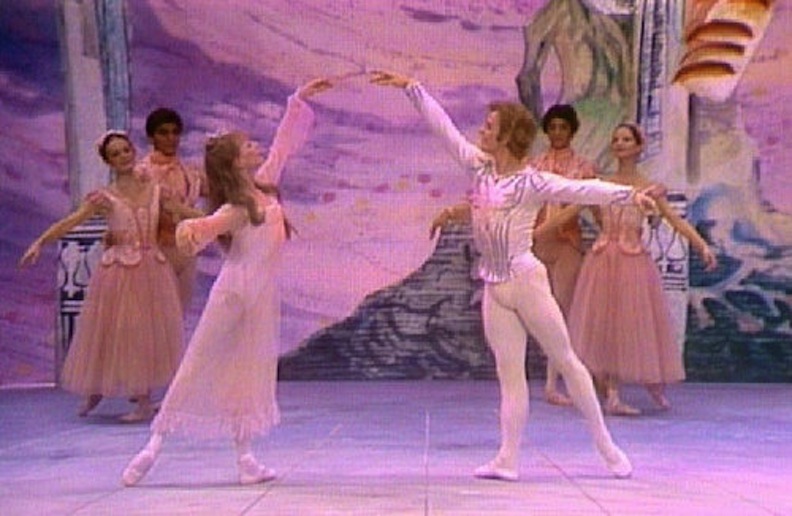 No Disney dolls were made of Kirkland and Baryshnikov’s stunning dance special, and what a shame. I think in 1977, and that is a lifetime ago — and for some readers before they were even born — dolls were still primarily viewed as the pastime for little girls. Sure, adult women did collect dolls — antiques at auction or at estate sales — but the guilt-free adult doll collector was still a decade away. Perhaps some enterprising face-up artist or a re-paint artist will be able to take the Disney Mattel Four Realms dolls and transform them into the luminous and lovely Gelsey Kirkland. Maybe in that way the 1977 “Nutcracker” will get to take a well-deserved bow once more. 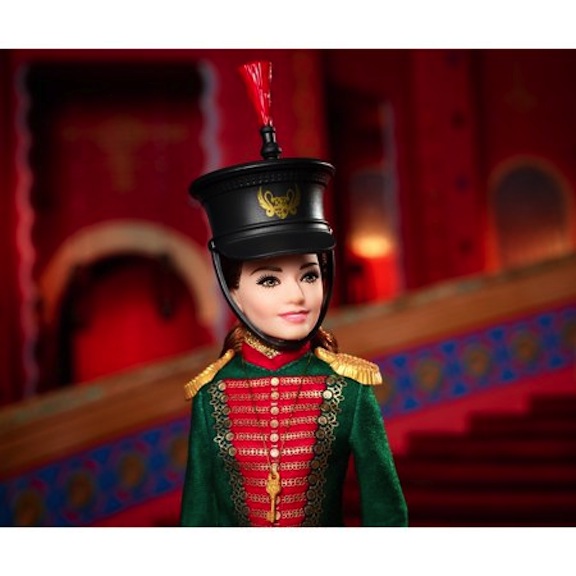 Clara, the toy soldier doll, from Disney’s “The Nutcracker and the Four Realms”

“The Nutcracker” ballet is beloved because of its exciting and enchanting score by Tchaikovsky. It features music that is hummable and (obviously) danceable. It ricochets from ethereal strains to fun and frenetic jumping-around movements. The ballet works so well for families because it literally has something mesmerizing for every member of the viewing audience. Fathers and sons, mothers and daughter, men and women — all genders and ages can gravitate to any interlude from this ballet. Tchaikovsky knew what he was doing, and he made sure to sweeten the pot by giving the ballet’s dancers and musicians heart-tugging and rib-tickling show stoppers. 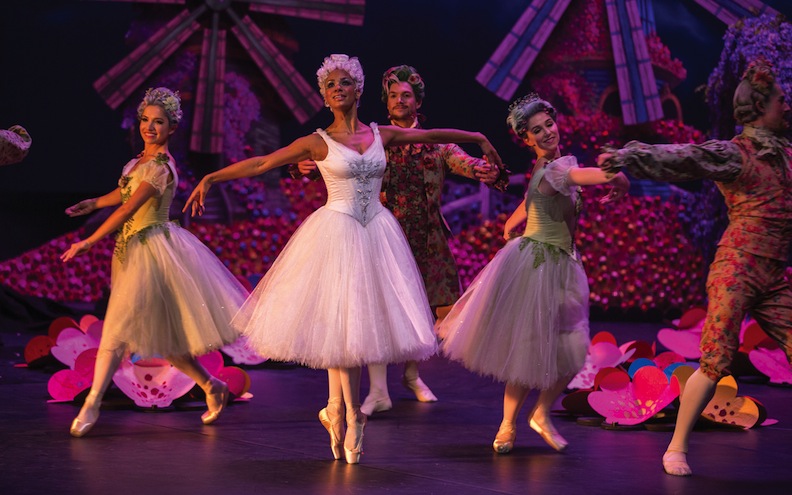 A film still from Disney’s “The Nutcracker and the Four Realms” showcases its heady visuals. (Courtesy Disney Enterprises)

Sadly, “The Nutcracker and the Four Realms” has received poor notices. When I saw the commercials for it, I was gobsmacked. It looked so vibrant and alive, and the images of the cast seemed to palpitate off the screen. I admit I am a sucker for ballet, and a dance spectacle that features hard candies doing arabesques, pastries pirouetting, and chocolates as part of the corps de ballet is right up my alley. When I heard that a Facebook friend of mine was seeing “The Nutcracker and the Four Realms,” I posted how eager I was to see it, too. I even likened its visuals to the great filmmakers Michael Powell and Emeric Pressburger and their legendary ballet movies, “The Red Shoes” and “The Tales of Hoffmann.” So much for advertising! 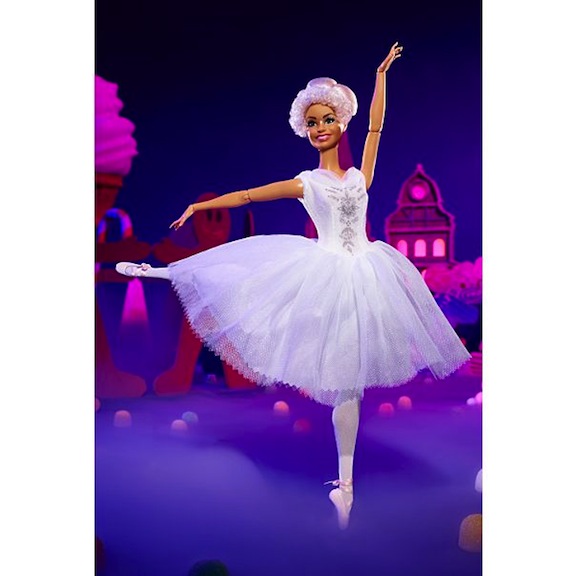 The Mattel Disney doll version of Misty Copeland as the Ballerina of the Realms.

The critics have given “The Nutcracker and the Four Realms” a majority of thumbs-down. Not even audience-based critical sites have been kind to this big-budget enterprise. Unbelievably, the main criticism seems to be that it lacks coherent dancing and has little respect for the original source material’s music. Everyone agrees that it is visually memorable, but its storyline is a shamble. It is being likened to a huge caloric holiday meal that lacks nutrition and leaves one hungry an hour later. 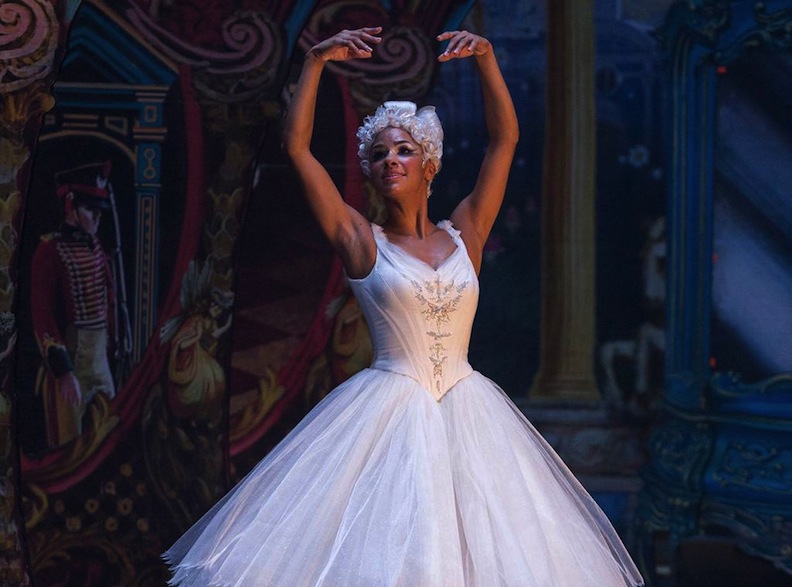 I think I shall wait for this movie to glide into Redbox, or perhaps it will even end up warming up in the wings for Amazon Prime. It is rather disheartening, especially because it features the prima ballerina Misty Copeland. Misty is an American original, and she has single-handedly re-defined what a ballerina should look like, move like, and dance like in the 21st century. Mattel has honored her with a Barbie doll in her likeness. She is one of their prominent Shero success stories. 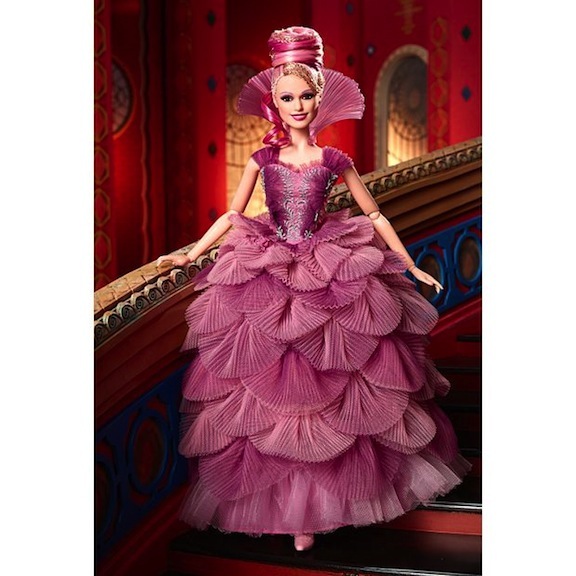 Keira Knightley portrays the Sugar Plum Fairy in the Disney re-interpretation. Her Mattel doll is magnificent.

For children who are on the shelf about ballet, “The Nutcracker and the Four Realms” is a way to gently introduce them to the notion of a narrative combined with choreography. It also features the familiar face of Keira Knightley as the Sugar Plum Fairy, Morgan Freeman as Drosselmeyer, and Helen Mirren as Mother Ginger. The Mattel Disney dolls of the characters are exquisitely made, and would look beautiful as holiday décor or as the canvas for reworking and re-imagining. 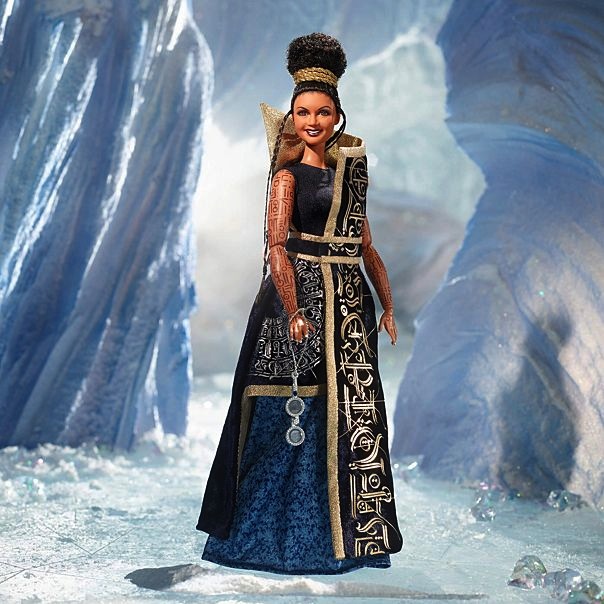 The Mindy Kaling portrait doll from Mattel. The character of Mrs. Who was featured in Disney’s “A Wrinkle in Time.”

Disney and Mattel also joined forces for the ill-fated “A Wrinkle in Time.” I saw that movie with my daughter, and I know what the critics mean about leaving one unfulfilled. During the movie, I recall being impressed by the special effects and by some of the acting by the juvenile stars. However, a month after seeing it, and I have hardly a recollection of anything, except that actress Mindy Kaling never looked lovelier and Reese Witherspoon is always reliable as a comedic actress. 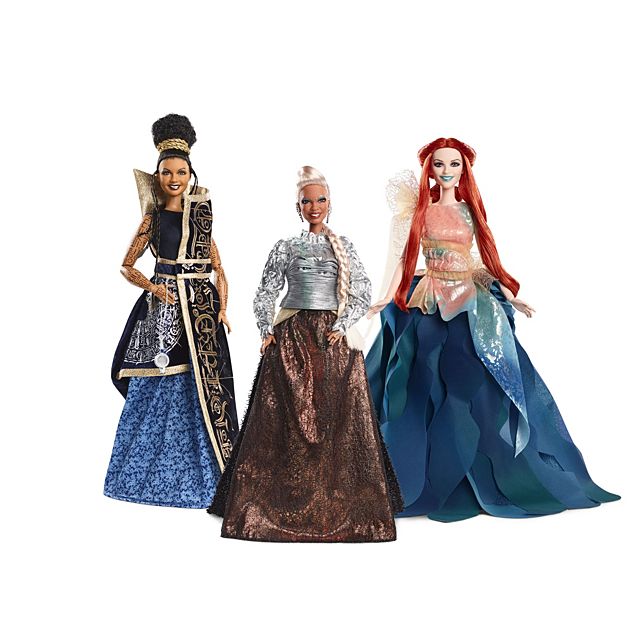 The three driving spiritual forces behind “A Wrinkle in Time.” The Mattel dolls of Mrs. Who (Kaling), Mrs. Which (Winfrey), and Mrs. Whatsit (Witherspoon).

“A Wrinkle in Time” was directed by Ava DuVernay, who was turned into a limited-edition Shero by Mattel. Just like male directors who are sometimes in over their heads, DuVernay was not the right person to helm a fantasy sci-fi script that began its life as a classic children’s book. It was definitely not the right pairing. Just like poor Misty Copeland, who is stranded in “The Nutcracker and the Four Realms” disappointment, Kaling, Witherspoon, and even Oprah Winfrey couldn’t straighten out “A Wrinkle in Time.” It had too many flaws, but it did spawn magnificently costumed dolls by Mattel. Again, not every film is a classic, but the dolls don’t know that. The “Wrinkle in Time” dolls are gorgeously dressed and memorably sculpted. Too bad, their film debut was so easy to forget. 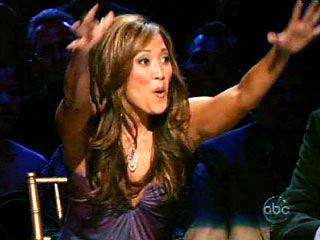 Buy Any Good Dolls Lately? Fess up and share the details. I’m in the market to know.