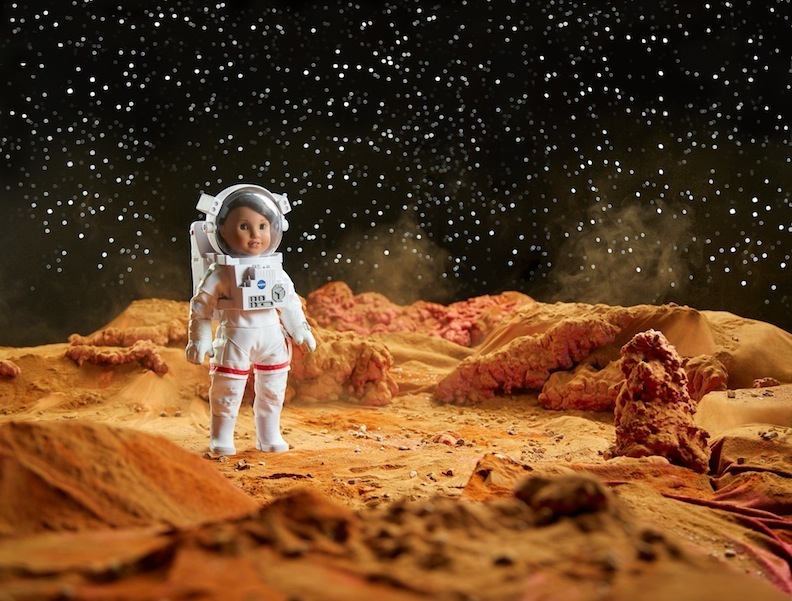 Each episode of “Star Trek” begins with Captain Kirk introducing space as “the final frontier.” For us real-life earthlings, space has stopped being a frontier and is a past achievement. The 50th anniversary of man walking on the moon has been subtly celebrated throughout the month of July. One of the greatest accomplishments of the 20th century has now become a long-ago event that is often mocked and dismissed. A historic mission is now simply historical. Still, the allure of space entices doll artists and doll companies. It’s fascinating to see who and what is transformed into space and astronaut dolls. 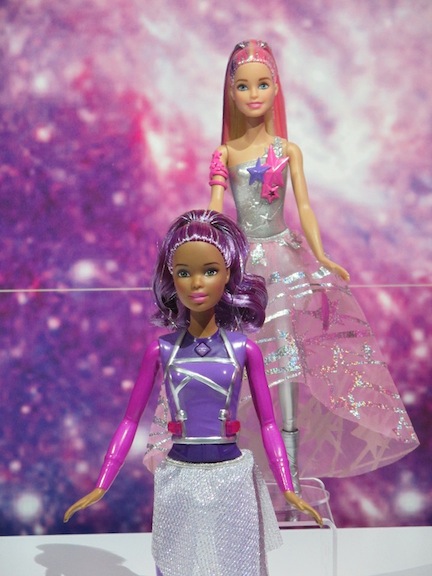 Part of the Star Light Adventure series, these Barbies are sci-fi heroes. Gliding on hoverboards to explore the galaxy, they are make-believe space and astronaut dolls.

The space and astronaut dolls definitely blast off in two distinct directions. We have the dolls that are based in reality: encouraging girls to pursue a career in the sciences and eventually space exploration. These dolls are aspirational. Over the past decades, and actually centuries, women were not frequent participants in the field of science. Yes, we can rattle off a few women who made a difference — Marie Curie, Ada Lovelace, Sally Ride, Hedy Lamarr — but the business of space and astronomy skewed decidedly male. 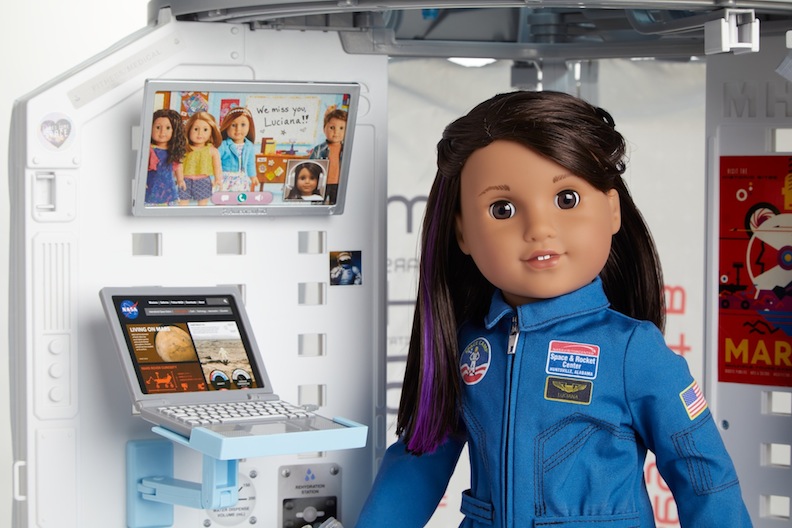 Garbed in her flight suit, Luciana is an inspirational and aspirational doll from American Girl.

There’s been a push to encourage girls to go into the sciences. STEM (science, technology, engineering, math) courses are offered more and more in our school systems, and girls are prodded to go into these classes. My daughter has a natural tendency to be analytical and mathematical in her approach to life. As an eighth grader, she built a prosthetic hand on her own. (It was made out of cardboard, straws, wire, and duct tape!) Now about to begin her freshman year in high school, she is the perfect STEM candidate. Among her group of friends, she is the only one who really fits that mold. Still, space and astronaut dolls are released to entice girls to embrace these professions. 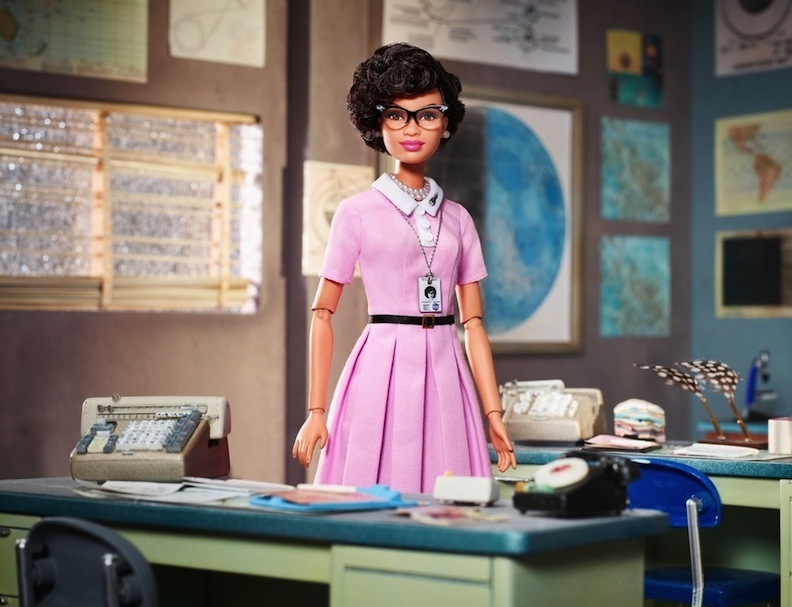 Katherine Johnson is a real-life hero of mathematics and the NASA program. This space and astronaut doll is a role model for the ages.

Back in 1953, Katherine Goble became one of the few African-Americans employed by NASA’s predecessor, NACA. A gifted mathematician, Goble worked as a human computer. She was called upon to figure out manual calculations of trajectory, gust alleviation, and speed and distances. Goble, who married a second time, in 1959, became known as Katherine Johnson. During this second marriage, while raising three children, Johnson became a crucial member of the NASA manned space program. 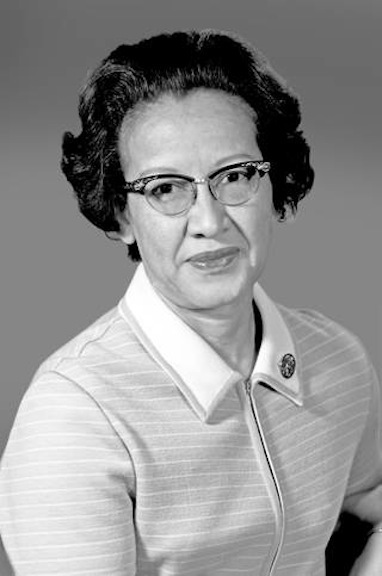 Her work was central for calculating launch windows and emergency return paths for the brave astronauts who were hurling into the unknown. Johnson proved that integration could be an integral tool for finding the most capable and competent workers. Mattel honored Katherine Johnson with her own Barbie doll after her biography was chronicled in “Hidden Figures.” Part of the Inspiring Women series of Barbies, Johnson is a space and astronaut doll that is uplifting and relevant. 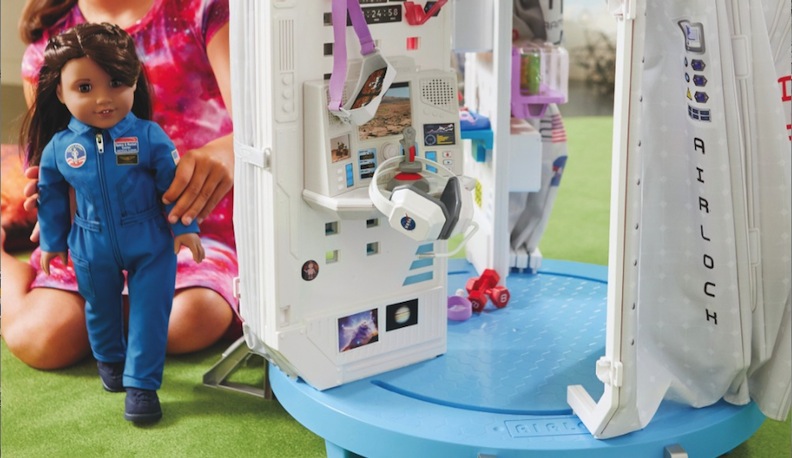 Hands-on play could lead to hands-on experimentation in the chem lab or rocket-propulsion workshop.

American Girl has a connection to the celestial heavens with their Luciana doll. This, too, is an aspirational/inspirational doll; though its storyline is fictional. Luciana wants to become a scientist who will explore Mars. Unveiled in January 2018, the ethnically Chilean doll embodies American girls of different heritages who dare to dream big. 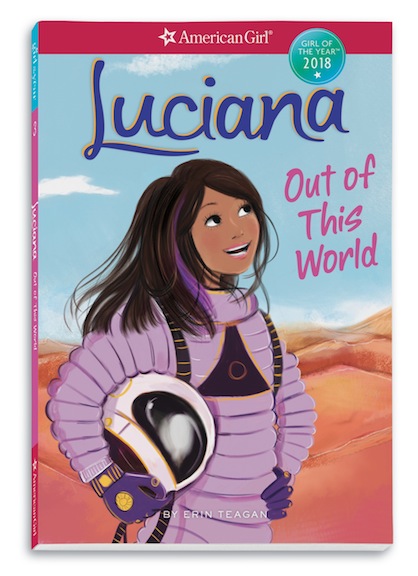 The making of an astronaut! Luciana’s trials and tribulations are traced in a series of American Girl paperbacks.

In her storyline, which was overseen by a quartet of female scientists, Luciana Vega excels at Space Camp. Her capabilities, competency, and drive help her to rise through the ranks. She becomes a trainee who discovers the talents and abilities that have always lurked within her. This space and astronaut doll taps into the self-confidence and self-assertion that many girls lack. In order to reach Mars one day, Luciana has to learn to conquer her own failures and shortcomings. It’s a long distance from Earth to Mars, and it’s a long way for many girls to recognize their own strengths. 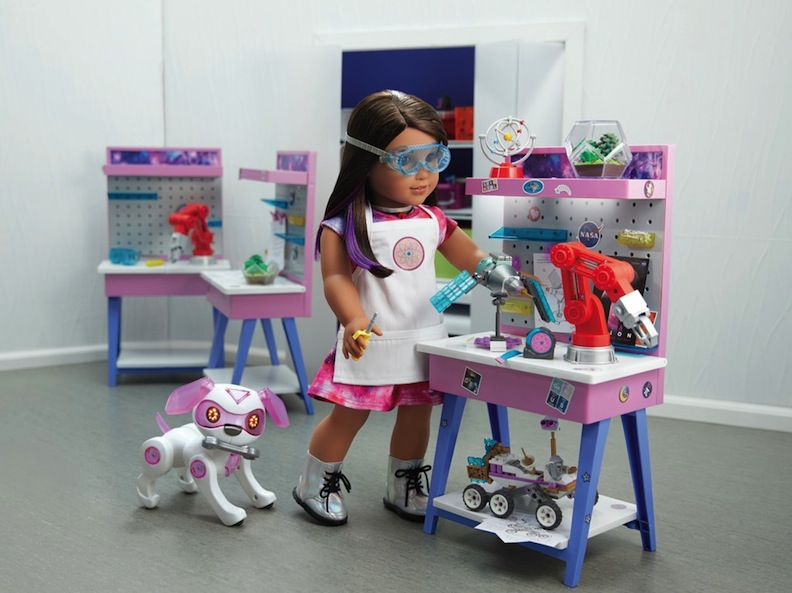 The Luciana Vega American Girl doll and her accessories are fascinating because they are STEM-centric, while also being decidedly “feminine.” Apparently, the Luciana character is a whiz at robotics and engineering. Her maker space — a must-have these days for STEM subjects — is a bright white, dark purple/blue and hot pink! That’s certainly not typical of reality. However, American Girl knows that it is vying for play space against Hasbro, Disney Princesses, and other fashion dolls. Even though Luciana is using her brains, and exercising her brawn with physical-endurance tests, the doll has her standard pink side. She may be practicing rocket telemetry, but she’s earthbound with her color coordination.

Vintage space-exploring Barbie. Back in 1965, she was introduced as “Miss Astronaut.”

Speaking of “think pink,” I would be remiss if I didn’t give a shout-out to Barbie and her space and astronaut dolls. Barbie straddles both surfaces of the moon and the stars; she’s aspirational and entirely magical. The Barbie space and astronaut dolls come in real-world approximations and galactic visionaries. The comely teen fashion model donned astronaut gear way before Space Camp was even an option. In 1965, Barbie traded in her swimsuit for a spacesuit. Mattel debuted her as “Miss Astronaut,” and the teenage space adventurer looks rather austere in her getup. 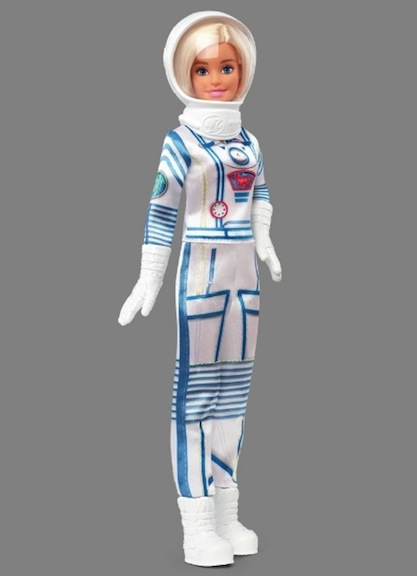 2019’s Astronaut Barbie, where the facial sculpt seems younger and fresher than the original.

This year, 2019, Mattel smartly honored the 50th anniversary of America’s lunar landing by fashioning a new Barbie astronaut. This version looks more girlish and more coquettish. Her long blond tresses are clearly visible through her helmet. In the 2019 incarnation, Barbie proves a girl can do anything: astronomy, aeronautics, and astronaut training. She can ace that, and still find time to organize a pep rally and run a dog-grooming business on the side. 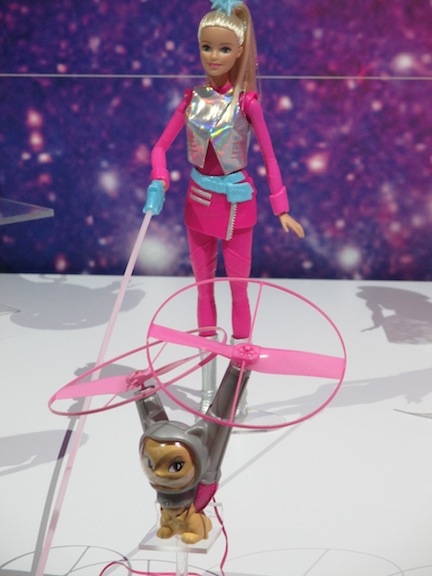 Barbie is always known for her caring and sharing nature. This space and astronaut doll has Barbie and her cat doing a space walk.

Barbie’s other space and astronaut dolls are sci-fi creations. In her glittery, glistening garb, she is a space explorer, complete with a planetary pet. A nurturing and caring pet owner, Barbie is able to take her critter out for space walks. Mattel debuted Barbie and her space-exploring togs back at Toy Fair 2016. Part of the Star Light Adventure series, Barbie is dressed like one of William Shatner’s intergalactic squeezes on “Star Trek.” Her costume is iridescent and she is able to ride a hoverboard. This space and astronaut doll is very radiant — possibly radioactive — and cheerful. She is like a cheerleader in space!

Greek scientist, and NASA team member, Eleni Antoniadou was made into a 2019 Shero doll from Mattel.

To balance out the skateboard-surfing space doll, Mattel has also released true-to-life astronaut dolls that are grounded in reality. This year, partnering with National Geographic, Mattel created an Astrophysicist Barbie. She comes with a telescope and a star chart. Additionally, Mattel selected real-life NASA scientist Eleni Antoniadou as one of their Shero dolls for 2019. This doll that honors a woman who has exceled in STEM is remarkable and relatable. 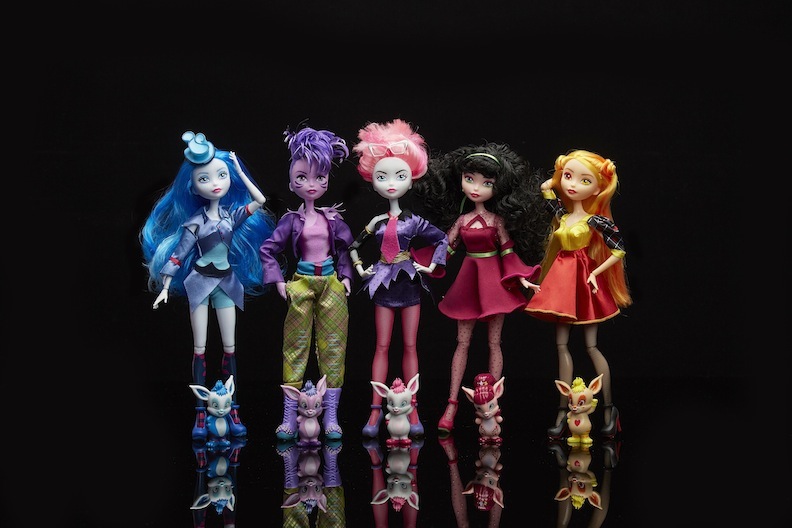 Making music and soaring across the heavens, SpacePop dolls are intergalactic princesses disguised as rock musicians. These space and astronaut dolls rule!

The connection between girls and graphing, women and rockets, females and force fields, might be still in its infancy. Despite all the actual, living, breathing women of scientific accomplishment, there still are wide swaths of the population that just don’t express an interest. This might change. If, indeed, toys sway children when introduced to them early, then space and astronaut dolls might have an impact. 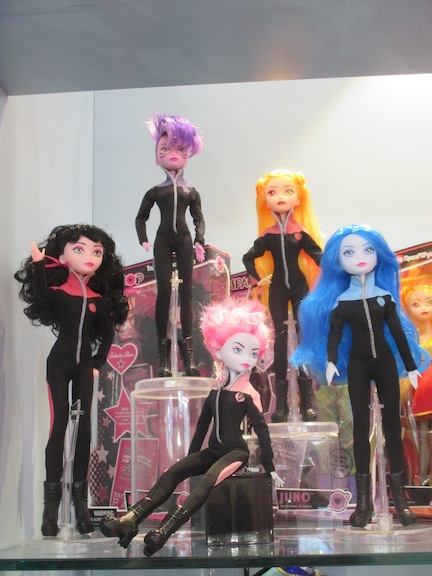 When they’re not jamming music together, Madame Alexander’s SpacePop dolls are jamming frequencies.

Outrageous, sci-fi-themed characters, like Madame Alexander’s SpacePop Rockers, blend camp sensibilities with Space Camp physics. (The alien girls are actually intergalactic royalty masquerading as glam-rock musicians.) David Bowie, Ziggy Stardust himself, is joining Mattel’s space doll race. There are many options to impress, influence, and inspire children — and many are tailored for girls. 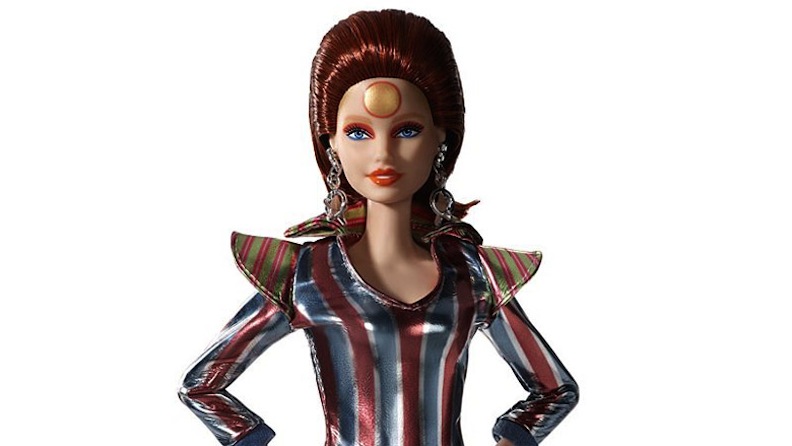 The array of space and astronaut dolls is astounding and intriguing. If they help to influence a future generation of girls who want to conquer Area 51 and the Andromeda Belt, how wondrous! If not, perhaps our next Ursula K. Le Guin or Connie Willis, two exceptional sci-fi authors, will be among this group. In either case, there are bold, new worlds to conquer and explore.