Oh, Barbie! Whereas most other ladies your age are figuring out how to cope with empty-nest syndrome, you keep filling newspapers and magazines with gossip, outrage, cries of “the end is near,” and sociological lamentations. When other 50-plus-year-old women are being issued their AARP card and ushered into a more gentle, leisurely lifestyle, you are showing it’s never too late to be a “hard body” with a “badass” attitude. This week’s cyber universe was abuzz with Barbie blasts—complaints and condemnations that once again tried to tie the “Plastic One” with the demise of civilization as we know it.

This time, the link was due largely to ink. 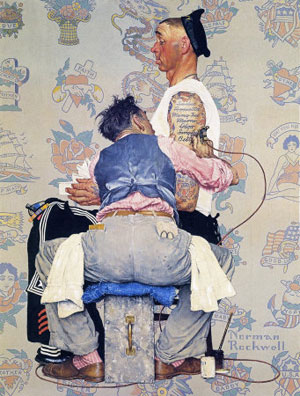 It’s no secret that tattoos have become a commonplace accessory. Once the lone realm of lonely sailors on shore leave—the Norman Rockwell painting of the sailor having his sweethearts’ names crossed off and replaced on his arm summed it up comically and beautifully—tattoos are now very likely to be found on your 18-year-old niece’s ankle and her 30-year-old teacher’s shoulder. They are badges of independence, decadence, self-expression, and liberation: pursuits that used to belong solely to men. Now, with women moving farther and farther away from the conventional notion of femininity—docile, mild-mannered, quiet, subdued, subordinate—it’s only natural that girls today are seeking to sow their wild oats. And by doing this onetime males-only rebellion, there are bound to be mistakes along the way.

Barbie, who always has her vinyl pinky on the pulse of what’s alternately cool and hot, 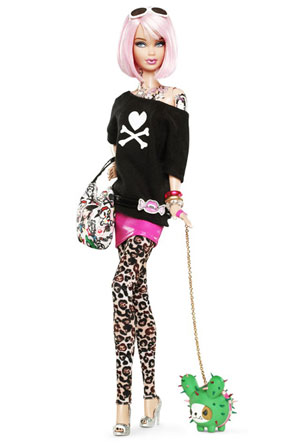 has emerged this fall with a torso covered in tattooed artwork. The doll, known as “Tokidoki Barbie,” is a modern version of Ray Bradbury’s classic “Illustrated Man.”

In this case, our Miss Roberts illustrates that the American public will rush to judgment without knowing all the facts, and will cloak their ignorance behind the always available and accessible shield of “the children.”

Outraged parents have bellyached that the marked-up doll is a bad role model for children. If little girls see Barbie in all her anime glory, supposedly they will be driven to seek out tattoos of their own.

“Mommy, after Friendly’s and Build-A-Bear, can we go to the Skull Piercing Parlor? I really want to get a Hello Kitty tat! Please! Pretty please!!!”

Can you hear those plaintive pre-K cries echoing from minivans all across these fruited plains?

First off, the “Tokidoki Barbie” is designed for the adult collector. Pretty irresponsible to be buying the collectible for a young child’s plaything, for starters.

But beyond that, every pop star today has a tattoo. Every basketball star has an image of his child—or in some cases, multiple children—lacing his biceps and triceps. Tattoos are everywhere. They are this decade’s “pet rock” and lava lamp. I’m sure it’s a fad that will eventually fade; but when it does, it will leave behind a permanent reminder.

Tattoos are so powerful nowadays, they can even make a person into a household name. They have the potency to take an anonymous artsy type, with an adventurous spirit, and catapult her into being a reality-TV star. Kat Von D went from obscurity to having her own TV program, and even fronting her own designer fashion label. She’s famous because of her tattoos and tattooing skills. 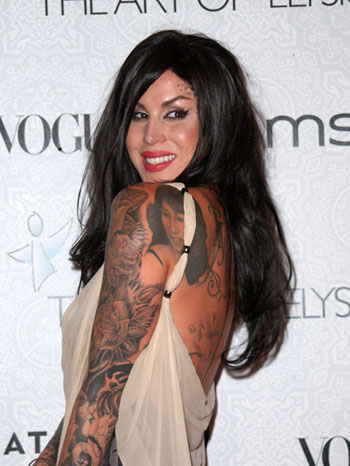 Kat Von D is also well known because of her revolving-door love life, which happened to spin by and get stuck on America’s sweetheart, Sandra Bullock.

And that really delineates how tattoos have come to the forearm and the foreground of America.

In years past, Sandra “Sandy” Bullock was the American ideal. She was pretty, perky, pleasant, and 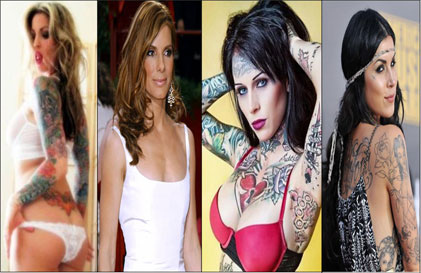 personable. She was the Sandra Dee of the 1990s—starring in and producing chick flicks and very successful romantic comedies.

However, Ms. Bullock had a very public comeuppance over the past few years—all courtesy of tattoos.

Her husband, Jesse James—already a bad omen, girlfriend—known for his tattoos and outlaw ways, cheated on Sandra while she was filming “The Blind Side.” (You can’t make these things up.) He blindsided her with a tattooed bimbo named Bombshell McGee (see above parenthetical statement) and then cheated on said Ms. McGee with Kat Von D. 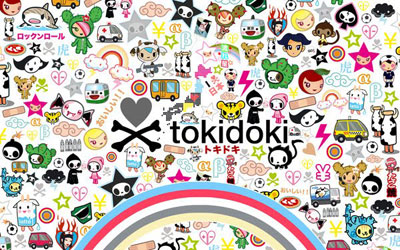 Yes, tattoos are everywhere and on everyone.

The “Tokidoki Barbie” isn’t going to cause a stampede for tramp stamps. This latest Mattel offering is a reflection of what’s already going on around us. It is a result—not the catalyst. And from the looks of “Tokidoki” and the furor it’s causing, chances for “Sold Out” status seems very okey-dokey.

There’s one thing I know for sure: controversy is always great for sweeping up a collectible. That’s something that can be stamped on Miss Barbie’s butt. This will be a hot one! 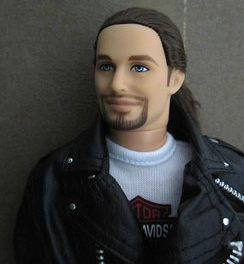 Leaders of the Pack: Dolls are easy riders and easy on the eyes!