Let’s Get Ready to Rumba: NFL or DWTS? Both are physical, ferocious, and fan favorites. 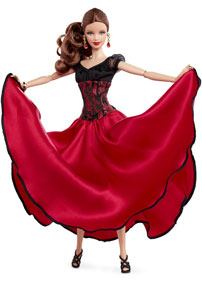 “Dancing with the Stars” has launched a lineup of Barbies dressed in costumes that are sure to rate a 10—even from hard-to-please Len. Shown here, competitor Barbie in her “Paso Doble” duds. 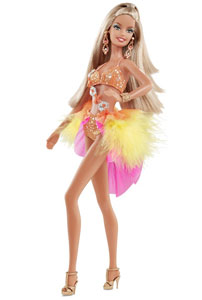 The “Samba Barbie” is a carnival waiting to happen! The Linda Kyaw-designed doll captures the spirit of performance and uninhibited joy. 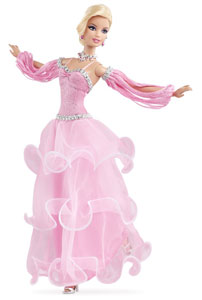 Sold out on BarbieCollector’s cyber cite, the “Waltz Barbie” from DWTS was an enormous sensation with doll collectors and dance fans alike. 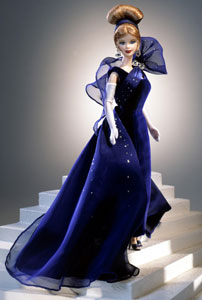 From 1999, the superstar fashion doll was taking bows in her “Embassy Waltz” costume. 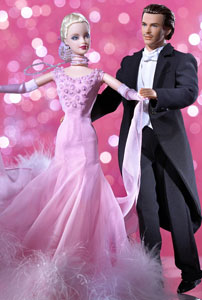 It helps to have a supportive partner on the dance floor and in life. “The Waltz Barbie and Ken Gift Set” certainly displayed America’s lovebirds as an in-synch pair. The couple made its dancing debut in 2003. 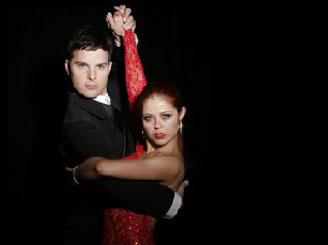 Two of the show’s most in-demand partners, real-life married couple Jonathan and Anna, announced the end of their marriage. The couple says they will continue to perform as professional partners. 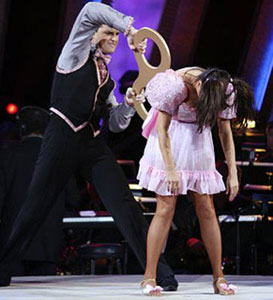 Jonathan Roberts was Marie Osmond’s professional partner on DWTS. Their dance routine that featured Marie as a wind-up doll has become a cult classic. 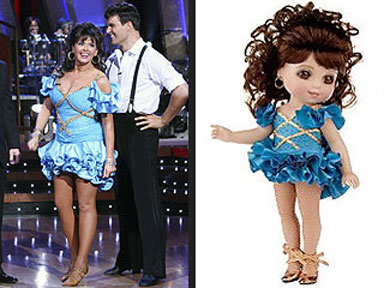 Marie and Jonathan managed to snare third place. Her costumes for the show were glittery and glamorous—inspiring Marie to interpret them in doll form. 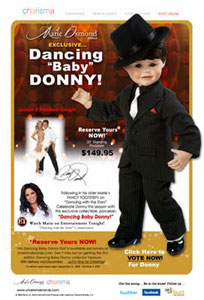 Big brother Donny did what his little sister couldn’t do: He won the dancing competition and snagged the coveted mirror ball trophy. Sister Marie designed a doll to honor her brother’s stint on the show. 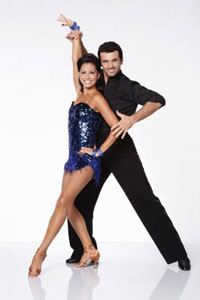 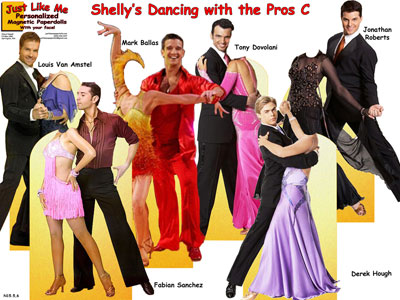 Individuals who are creative and are followers of DWTS have paid tribute to the show’s popularity and charisma with their own versions of paper dolls, magnetic figures, and customized dolls. The variations are endless. This set features Personalized Magnetic Dolls that allow the customer to include her own face!

What makes a dancer? Five years ago, I would have said “rhythm, grace, musicality, and talent.” That was before I took ballroom dance lessons with my friend Cam. Today I say it’s “baubles, beading, a Bedazzler glue gun, and a brilliant smile.” Cam and I may not ever win a national or regional title (or even a hokey-pokey face-off), but we certainly have learned to hold our heads high while remaining in hold. In fact, we swear we just don’t dance but rather fly as we fox trot and quick step across a dance studio’s floor.

Every Monday night, we chat about and cheer on our favorite athletes. We put on our game faces (lots of blush for me, and bronzer for Cam) and then settle down to watch not two teams—like old-fashioned, predictable football—but rather a whole entire kickline of competitors that outnumbers the Rockettes in their heyday. Of course, I’m talking about “Dancing with the Stars,” the American retooling of the BBC trans-Atlantic hit show.

The formula is simple: a bunch of “stars” (though many are more like well-known public figures or somewhat recognizable tabloid names) are paired with professional dancers. After several weeks of intensive boot camp (or Capezio camp, in this case), the stars and their partners go head-to-head against one another, which means a dozen or more sparring pairs. Each week, a couple is voted off, until just one dancing duo is left. That lucky winning pair gets a mirrored trophy ball, bragging rights, and an almost guaranteed invitation to appear in the Broadway show “Chicago” as one of the headliners. It’s a Horatio Alger from rags-to-riches success story for the feathers and finery set!
This week, Cam has been on the phone even before the first cha-cha has begun. The show has been in the news this week because of two rather sad developments in the “Dancing with the Stars” (DWTS) family: Melissa Rycroft, who was a fan favorite on the reality show “The Bachelor,” and became a crowd-pleaser on the ABC dancing program, fell and injured her neck and head over the weekend, putting her participation in jeopardy. Serious breaks and fractures and sprains have affected the dancers over all the show’s many seasons. And professional dance team Jonathan Roberts and Anna Trebunskaya, who have been married for nearly a decade, have announced a fracture of an emotional sort. They have agreed to divorce. The couple says they will remain friends and will try to keep their professional partnership going. (Jonathan is a particular favorite of Cam’s because he was partnered with Marie Osmond on DWTS, where they did a “creepy, crazy, totally insane” doll dance routine. To further quote Cam, “It was like a nightmare choreographed by Gene Kelly. I can’t wait until Marie stars in ‘What Ever Happened to Baby Jane,’ the musical! She had the insane overly rouged Bette Davis look down pat!”)
Hearing the stories about the injuries that often afflict the celebrities, and sometimes the pros, and learning about another divorce statistic (whatever the real reasons behind the marital dissolution), I must say it makes this lighthearted bit of fluff more meaningful and significant. It’s not just an hour of fluff and fairy-tale scoring (will Len ever give out a 10 before Carrie Anne and Bruno). No, it’s an actual race to the finish—a real competition that has sports components, Olympic elements, and prizefighting stamina for a sparkly, campy prize. It’s not as brutal or as physically wrecking as the NFL, but DWTS has claimed its share of casualties. And it’s also sported its share of Cinderella comebacks: people who were terrible at the show’s start and have gone on to place first or second.
With so much humanity on display, it’s no wonder that the ups and downs, flick kicks and back arches, have inspired dolls from manufacturers and individual artists alike. Even if you can’t find a person to waltz with, you’ll be able to bring home a first-rate competitor. They might just be dolls, but they pay tribute to creativity, stick-to-itiveness, and the will to win. Cam and I both say, “Brava! Bravo! Dance on!”
It comes as no surprise that Mattel has fashioned dolls that pay tribute to the pizzazz and panache that earmark an episode of DWTS. Designed by Linda Kyaw, the dancing dolls have pivotal bodies, and they look so much like the show’s competitors that Mattel runs a line in their ads that firmly states “the dolls cannot dance.” Former participant, and third-place runner-up, Marie Osmond created a line of dolls that showcased her actual outfits from her routines. She also designed a doll that captured her brother Donny (a winner of the mirror ball) as a dancing, prancing toddler!
No matter your proficiency at the mambo, find one of these dolls and give it a home. It really dresses up any curio cabinet or book shelf. And it’s hard to be blue when you’re staring at so much fabric and glitter!