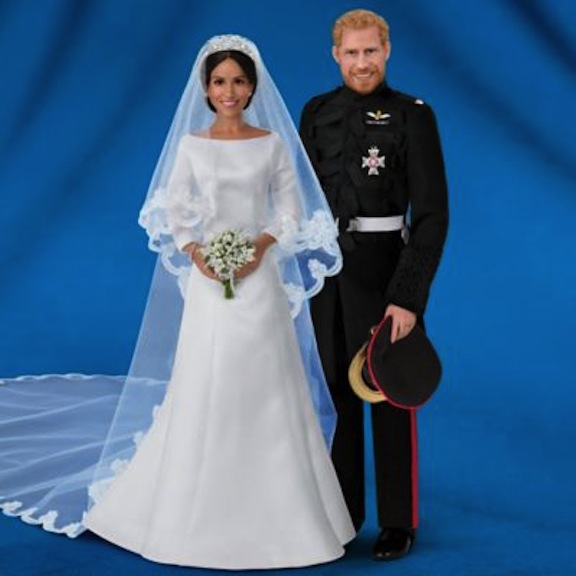 Ashton Drake created the stunning versions of Meghan Markle and Harry as they exchanged their vows of “I will,” one of the outstanding moments of 2018: A Year in Review.

When you are starting a brand-new year of blogging, it’s always entertaining to look back at some of the themes or insights that defined the prior year. I’ve certainly said a lot, and I hope that a portion of my gabbing was regarded as pearls of wisdom rather than rhinestones scattered among big opinions and corny comments! For 2018: The Year in Review, I have to say that a large amount of doll developments had to do with the coupling of collectibles and the movie industry. Cinematic licensing and filmdom’s fascination with collectors — and dolls, in particular — were hallmarks of the past year. 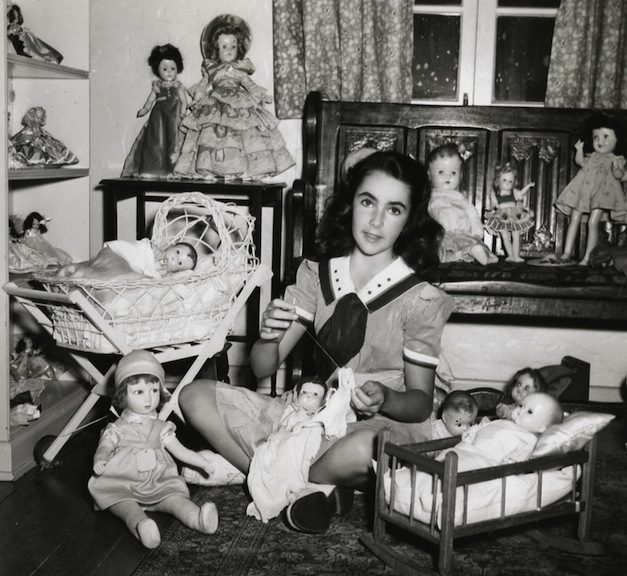 During her years as a child star, Liz Taylor was paired with dolls for PR photo shoots. 2018: A Year in Review salutes Taylor’s legacy as a doll icon.

For instance, so many movies of the 1940s, 1950s, and even into the ’60s, were focused on women’s mental-health issues and how that was often interpreted through their connection to dolls. Just as the 1970s into the early 2000s have shown dolls as the bedrock of bloodbaths and blood-curdling horror films, the previous decades of films spotlighted dolls as symbols of women wanting to hold on to their youth. As a way to avoid growing up — and in Hollywood, growing old, which is a major no-no — the heroines of many movies maintained a connection to their porcelain playthings. Dolls are often utilized in screenplays as a launchpad for hysteria and heightened anxiety. 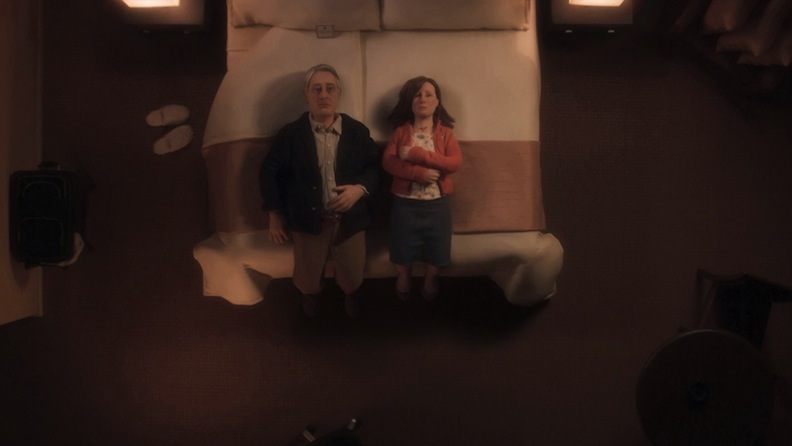 The characters of Michael and Lisa are more human than many typical characters traditionally seen in films. “Anomalisa” was a high point of this year’s blogging. Films really did matter in 2018: A Year in Review.

Observing 2018: The Year in Review, I’m impressed by how the Doll Chronicles watched, witnessed, and reviewed a bunch of films where dolls became stand-ins for unexpressed feelings. “Anomalisa” is still a devastating and amazing flick to watch. The fact that it stars dolls is even more mesmerizing. When it comes to a compelling vehicle about repressed maternal desire and twisted daughterly devotion, “Secret Ceremony,” starring doll favorite Liz Taylor and Mia Farrow, is at the top of the family tree. When TCM decides to air it again, make sure you’re there to enjoy it! 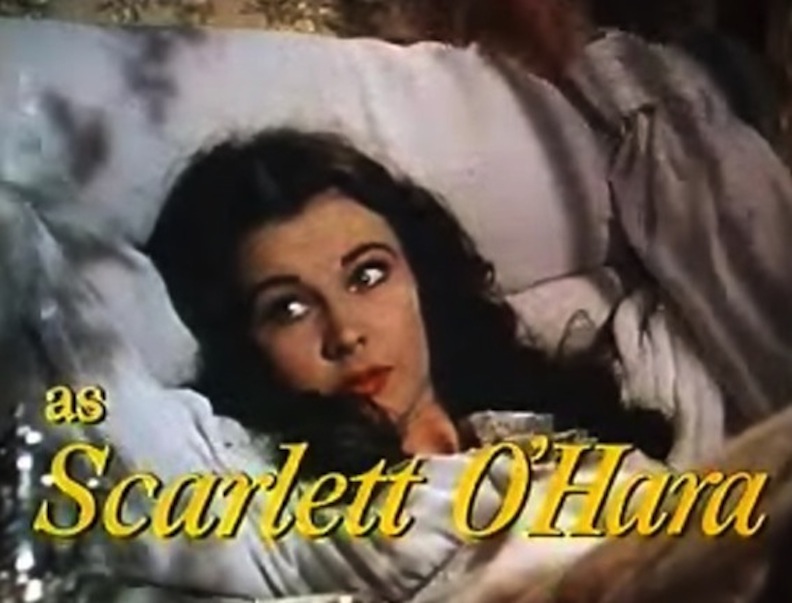 Vivien Leigh has earned a spot in doll collectors’ and artists’ hearts. That was evident in the 2018: A Year in Review.

As I prepped for 2018: The Year in Review, I discovered one of the most talked-about postings was the look at Vivien Leigh and her hold on doll artists. (Leigh has been immortalized by Mattel, Tonner, Madame Alexander, Franklin Mint, World Dolls, and so many more.) In the 1940 tearjerker “Waterloo Bridge,” she plays a doomed ballerina who offers a Billiken doll to her lover who is heading off to war. Convinced that the little godlike doll will serve as a protective charm, Leigh pins her hopes on the totem. She is foolishly convinced it will provide good fortune and safety for her departing, brave soldier. Of course, it doesn’t, and the doll’s impotence — and the naiveté of women who cling to fortune-telling and horoscope signs — is  eviscerated. Dolls have the clout to showcase what lurks beyond the pristine, sophisticated veneer. 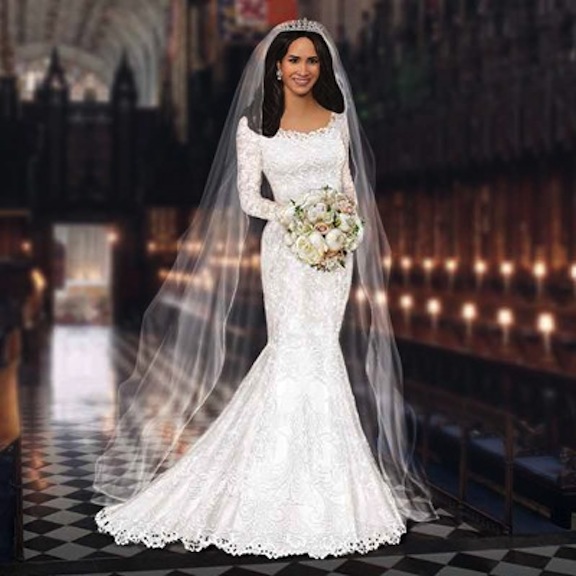 The Danbury Mint unveiled this rendering of Meghan as the ultimate Princess Bride. Markle sparkled throughout the year, the star of 2018: A Year in Review.

Speaking of sophistication, you can’t get more polished and cosmopolitan than the Royal Family, particularly the new, young branch of the monarchy. Meghan Markle does indeed sparkle as the new jewel in the dynastic family’s crown. She and her groom, Prince Harry, were stars of this year’s blogging bonanza. Harry and Meghan were click-bait for many online posters this year, and the 2018: The Year in Review certainly tipped its tiara in the power couple’s direction. 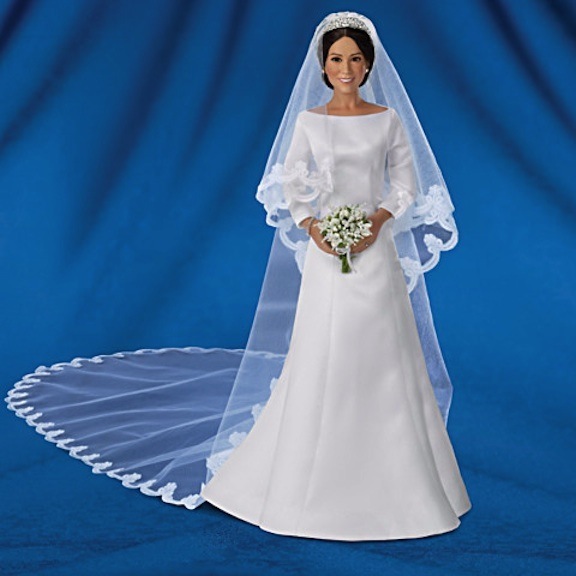 Ashton Drake made dreams come true for doll collectors everywhere. 2018: A Year in Review was all about Meghan’s radiant good looks.

One of the reasons why Meghan was so inspirational to doll collectors and doll artists is that she represented a new step forward in the royal family’s journey into the 21st century. From a mixed-race background, divorced, American, a “commoner,” and an actress no less, Markle was everything that a royal watcher would’ve bet against for a princely wife. 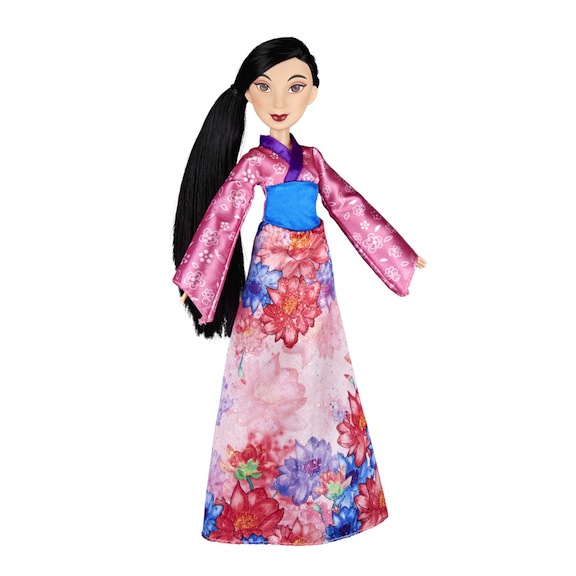 Mulan, the Royal Shimmer Doll from Hasbro. This Disney Princess redefined what it meant to be royal. This is very much a 2018: A Year in Review motif.

However, Harry didn’t grow up in the era of “Snow White” and “Cinderella.” Harry came of age during the rebooting of the classic Disney Princesses, and the concept of what makes a queenly heroine has certainly been redefined and recast. There’s no comparison between the shrinking violet who was Aurora in Disney’s “Sleeping Beauty” — a heroine who took an extremely long sleep, and didn’t turn her slumbering into a power nap — and Mulan in Disney’s eponymous musical. Whereas Aurora looked lovely as she snoozed away, Mulan cut her long locks, bound her breasts, glided into male attire, and fought for her family’s good name and reputation. In 2018: The Year in Review, it’s apparent that the old ways have fallen to the wayside and a more relaxed and accepting way has sprouted instead. 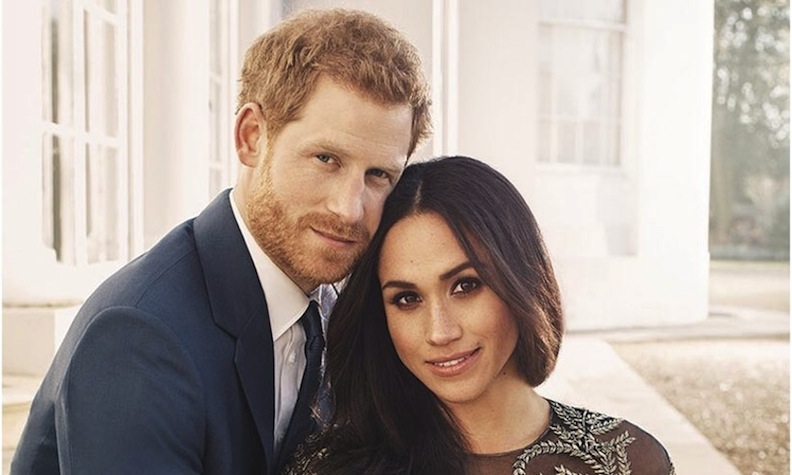 Just as Princess Diana refashioned what it meant to be a member of the House of Windsor, Meghan Markle is poised to have the United Kingdom’s residents reexamine what a royal is expected to believe, how they behave, and what they publicly represent. Already, Markle has made her anti-hunting/pro-animal rights positions well known, and she boldly shows no signs of slowing down. She is determined to keep true to her principles and loyal to her supportive mother and television friends. As the mother of a soon-to-be-born royal heir — even though the infant is pretty far down on the ascension list — Markle is not pretending to be anything other than what Harry fell in love with. For that, Markle is pretty remarkable, and it is no wonder that she dominated the 2018: Year in Review. 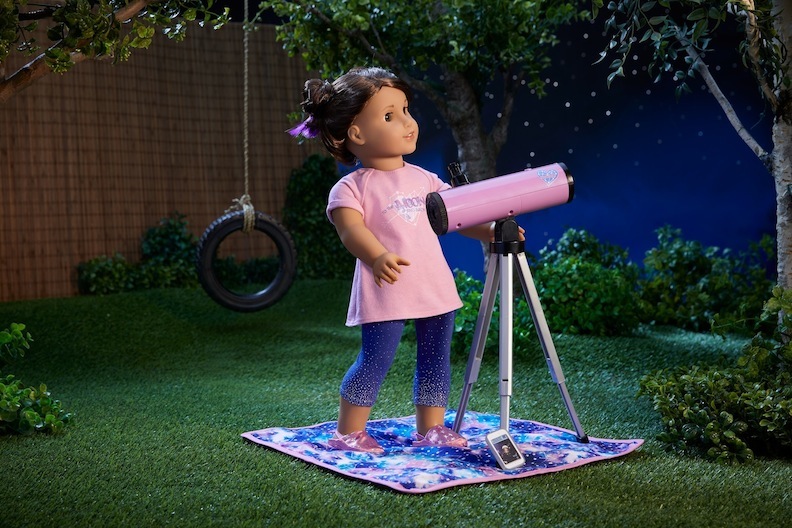 All girls and all their dreams were a big part of 2018: A Year in Review. Here, American Girl’s Luciana follows the stars and her heart’s desire.

During her childhood, young Meghan was not a mousey, retiring sort. Never a wallflower, she was an adolescent activist, even penning letters to major U.S. corporations to get them to alter their advertising lingo. Her courage and media savvy were intrinsic to her, and that bravado is reflected in many of the dolls that were launched this year. Whether they were flower girls set to serve at the Royal Wedding, or curious aspiring musicians, companies delivered dolls that were all about independence, self-direction, and pride in one’s pedigree. The American Girl had huge success with their astronaut doll that aspired to be the first U.S. astronaut on Mars. Luciana Vega was a Latina character who combined intelligence, courage, respect for family, and dreams that refuse to be denied. 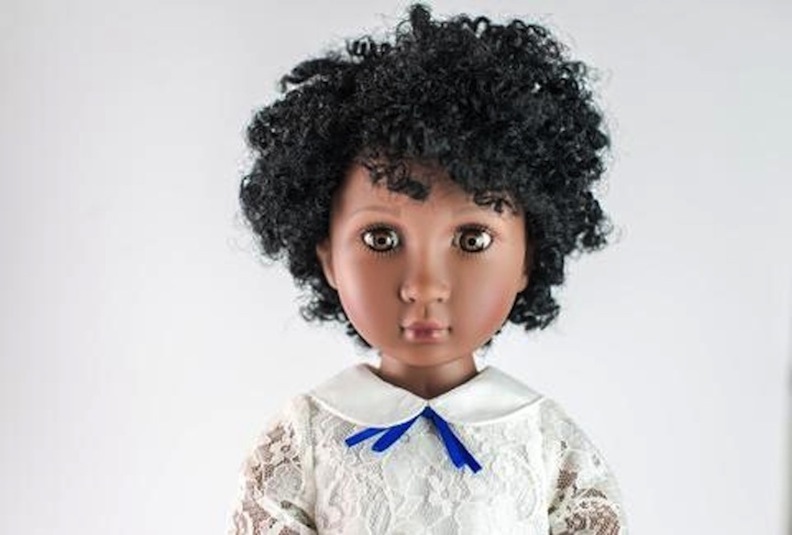 The brand-new modern doll from A Girl for All Time. Bex embodied the spirit of 2018: A Year in Review.

England’s A Girl for All Time had a fantastic debut in 2018 with their modern-day girl Bex. Living in contemporary London, Bex is an athlete, an artist, and an aspiring musician. Blessed with brains, she excels at composing poetry and has her nose always buried in a book (shades of Belle from “Beauty and the Beast”). The doll is also the star of her roller-hockey team, a frustrated baby-sitter (her trio of brothers drive her up the wall), and a rhythmic drummer who dreams of joining a rock band. Oh, and she’s also a girl of color. That little detail should, indeed, be just that … a minor detail. Bex, short for Becca, embodies what the doll creator Frances Cain envisions for a happy and healthy childhood. The 12-year-old A Girl for All Time heroine earns a gold star in the 2018: A Year in Review. She certainly does represent everything a mom, a grandma, an aunt, or a friend would want in a bestie. 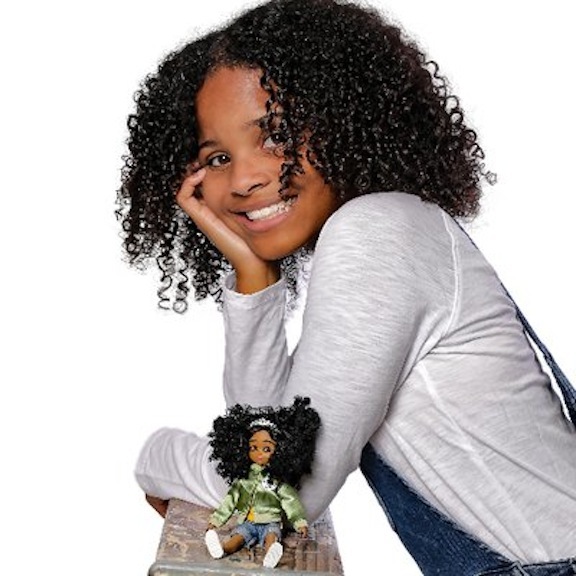 Mari Copeny combines social activism with self-actualization. She was one of the highlights of 2018: A Year in Review. Lottie Dolls honored her with a portrait doll.

That’s most likely the big takeaway from the 2018: A Year in Review. Whether the dolls were adult movie stars, pubescent dreamers, princesses in the making, or simply everyday lasses, dolls were in touch with their human counterparts. Humanity was very much in evidence in the 2018 toy arena.