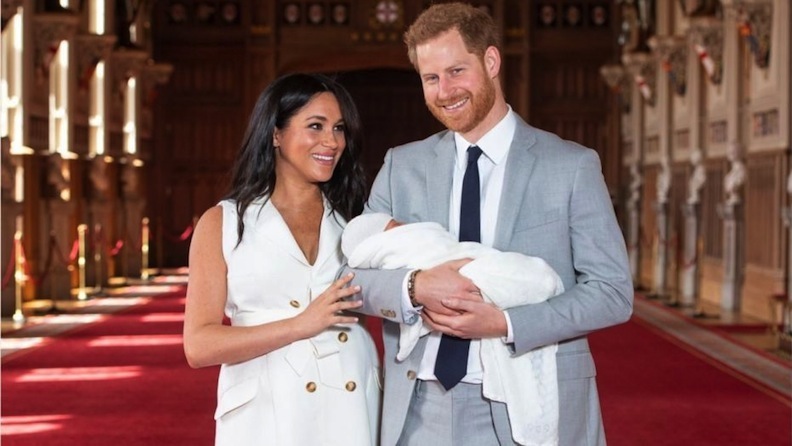 Meghan and Harry present their bundle of joy to the world in the official royal press photo.

It seems like it was only yesterday that I was blogging about the royal wedding of Harry and Meghan. (Yep, I’ve written about them so much, I feel like I’m on a first-name basis.) It has been a swiftly moving year. Since the tabloid darlings tied the knot, Meghan announced her pregnancy and the “stork watch” began. Having promised “I do” on May 19, 2018, Meghan and Harry proclaimed, “It’s a boy” on May 6, 2019. Their firstborn, Archie Harrison Mountbatten-Windsor, has entered the world of royal paparazzi and scandal reporters. Born into fame before he drew his first breath, Archie will (most likely) inspire a baby doll or two. The Archie Harrison Mountbatten-Windsor royal baby doll will be a biracial boy doll as individual as the real flesh-and-blood version. 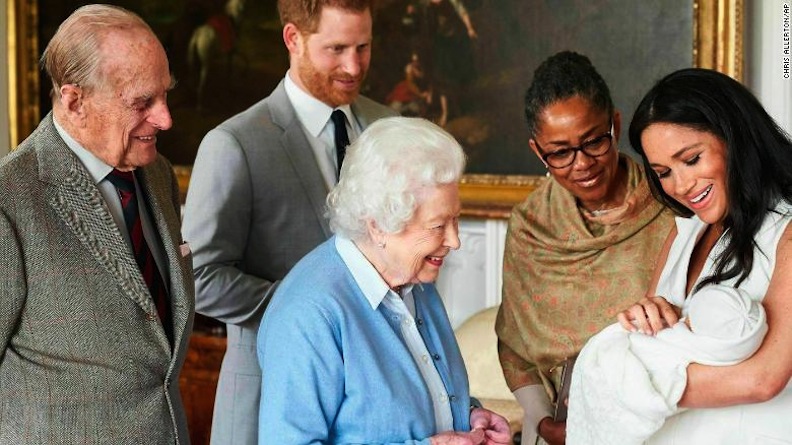 Historically, boy dolls have never sold as well as girl dolls. Perhaps it’s because the majority of doll collectors are women, and their dolls are a reflection of wish fulfillment. Little girls grow up, and they put aside the trappings of childhood. Girl dolls link the adult woman to her happy, carefree days. Also, daughters grow up. Women who treasure those special hours spent with young daughters can preserve the illusion of eternal youth. The baby doll that might resemble your child at any given age will never grow up, will never grow apart, and will never go away. Baby dolls are a testament to preserved innocence. An Archie royal baby doll will be a nod to a child who is definitely of the 21st century. 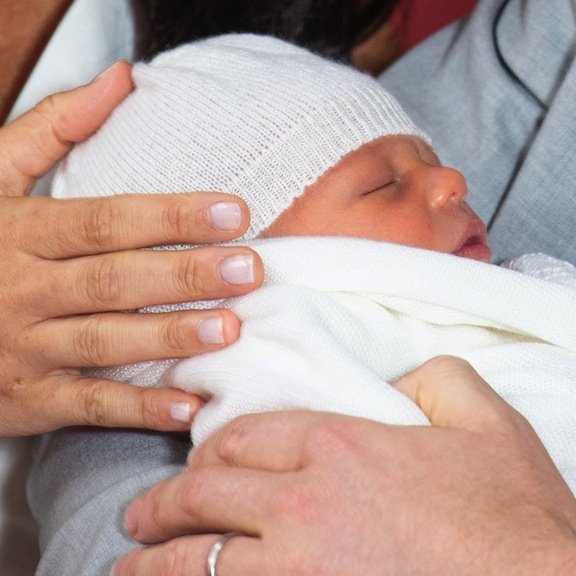 During the marriage ceremony of Meghan and Harry, there were some attendees who seemed to be snickering or giggling. They seemed to be amused by the African-American touches that Meghan requested. I recall watching the televised proceedings and actually feeling moved by the music selection and the reverend’s passionate homily. At that moment, it wasn’t an emphasis on Meghan’s black heritage that separated her from the royal guest list. Rather, it was her American background. The real-life Archie is the first royal baby to be half American! 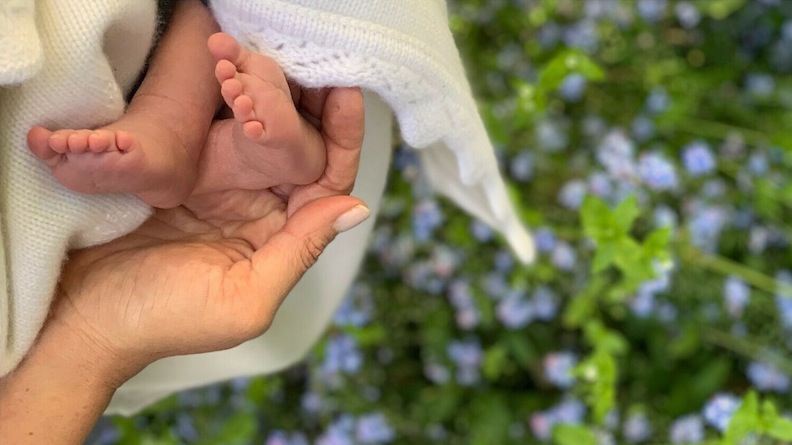 Made available on Sunday, May 12, 2019, by @SussexRoyal, Meghan the Duchess of Sussex holds the feet of her baby, Archie Harrison Mountbatten-Windsor. Prince Harry and Meghan, the Duchess of Sussex, have released a photo of their newborn baby to mark Meghan’s first Mother’s Day as a mom. The image posted on Instagram shows her hand cradling the feet of Archie Harrison Mountbatten-Windsor, against a bed of spring flowers. (@SussexRoyal via AP)

The onetime Mother Country has a smart and savvy royal mother in Meghan. The Duchess of Sussex wasn’t raised along noble lines and beneath regal rule. She’s an American, through and through, and I wonder if the American doll companies will embrace her son. The concept of an Archie royal baby doll should excite United States doll corporations and artists. Here is a baby that has bridged the divide: a dual British and American citizen. He’s descended from slave owners and slaves, ruling class and the ruled, the upper class and the working class. That’s a lot to hold in one little baby body. 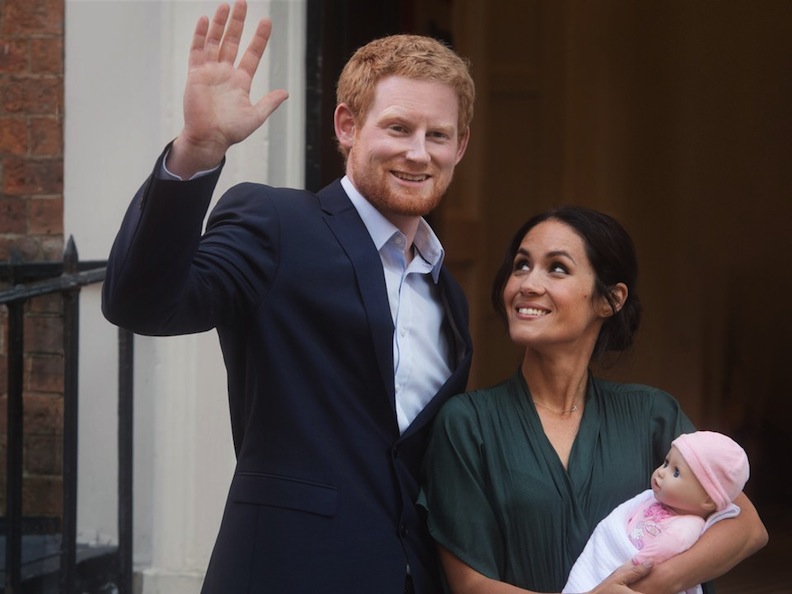 The British press hired lookalike actors to pose as Prince Harry and Meghan for a series of photos. The Meghan character holds a faux Archie royal baby doll. (Courtesy of Cavendish Press)

Entering the world, weighing 7 pounds 3 ounces, Archie is as cute as any baby doll from Charisma or JC Toys or Ashton-Drake. Paradise Galleries, here is a baby that does embody much of what today’s new generation looks like. By creating an Archie royal baby doll, an artist will be sculpting a mirror at today’s world. The social barriers are breaking down; the differences and marginalization of ethnic groups are vanishing.

Recently, CBS anchor Gayle King hosted a look at the royal couple’s whirlwind year. “Meghan & Harry Plus One” featured friends of the family, as well as professional royal watchers. The conversation among Gayle King, actress Janina Gavankar (Meghan’s longtime friend), and Ingrid Seward (publisher of MAJESTY MAGAZINE) touched on the special nature of Archie and the importance of realistic dolls. Anyone who watched this special realizes that an Archie royal baby doll is a reflection of how America, England, and the world looks today.

“There are still a lot of us who didn’t even grow up with dolls that look like us,” Gavankar, who is Indian, stated.

“I was one of those little girls. Yeah, yeah,” King, who is African American, agreed.

“So, to have the … the royal family bring a child of color into the world, it’s pretty awesome,” Gavankar admitted.

“The baby is already breaking new ground as the first half-American royal baby,” Seward pointed out. 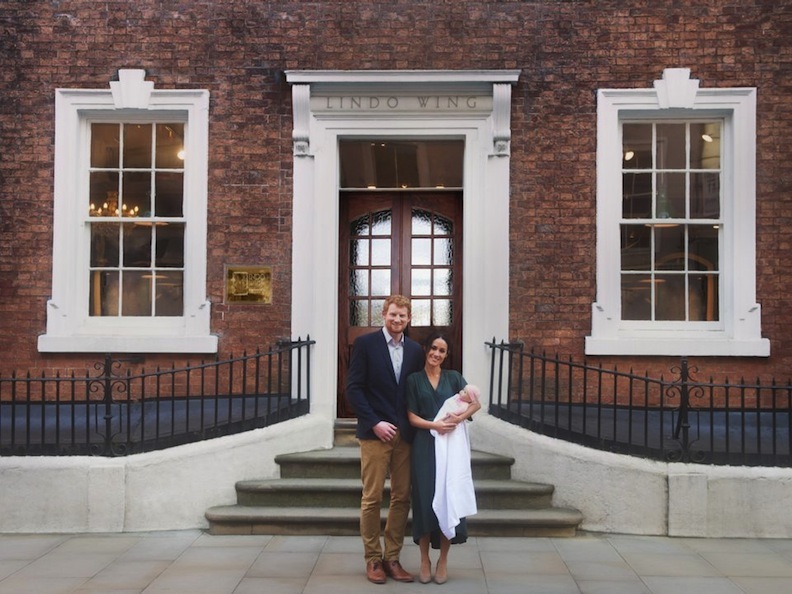 The Meghan actress plays the doting mother with her make-believe baby doll. Her hubby, “Prince Harry,” proudly stands by her side. (Courtesy of Cavendish Press)

King had to smile proudly at that observation. Archie is part American, part black, and totally his own person. He is the firstborn of Harry and Meghan, and the first acknowledged baby that doesn’t fit into the royal family’s carefully controlled and researched lineage. In baby doll terms, he is a one of a kind. 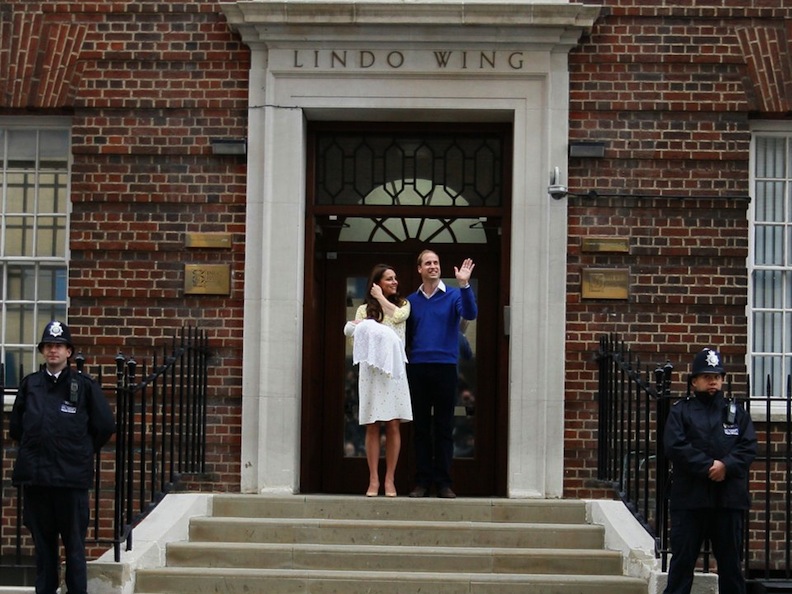 Kate and Wills have carried on the tradition of waving and posing at the doorway of the elite Lindo Wing. They have met the press three times this way. (Courtesy of Kensington Palace Press Office)

Remarkably, when the British press learned that Prince Harry and the Duchess of Sussex were not planning to pose in front of the exclusive Lindo Hospital Wing, like Princess Diana and Kate Middleton, they hired lookalike actors. Yep, a pair of doppelgangers assumed the iconic pose in front of the building where steady streams of royal moms have given birth. They also dressed up, complete with baby doll, to act like a young couple buying baby gear and infant clothing. Since Meghan and Harry promise to buck the old trends for modern choices, the press had them act like “regular commoners.” 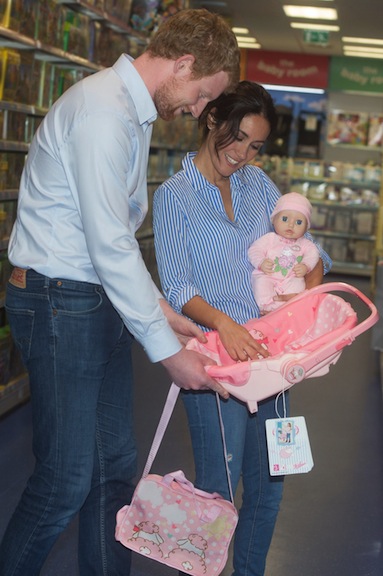 Because Meghan has made a point of saying she will raise their child in a modern way, the Brit press hired their actors to pretend to be shopping like “commoners” (Cavendish Press)

The hired lookalikes gazed at one another, cradled their make-believe baby child, and pretended to be a couple very much in love. Oddly enough, their baby doll was a white one. It confirmed King and Gavankar’s dialogue. The doll did not reflect what the real Archie (or America) would look like. By now, do you see the need for an Archie royal baby doll? Even the press’s machinations to create an alternative scenario—Harry and Meghan in Babies ‘R’ Us!—fell short of the reality. They never saw the number one big change: Harry holding the baby and showing him off to the world. In that one telling photo, Harry told everyone that he is a hands-on dad. 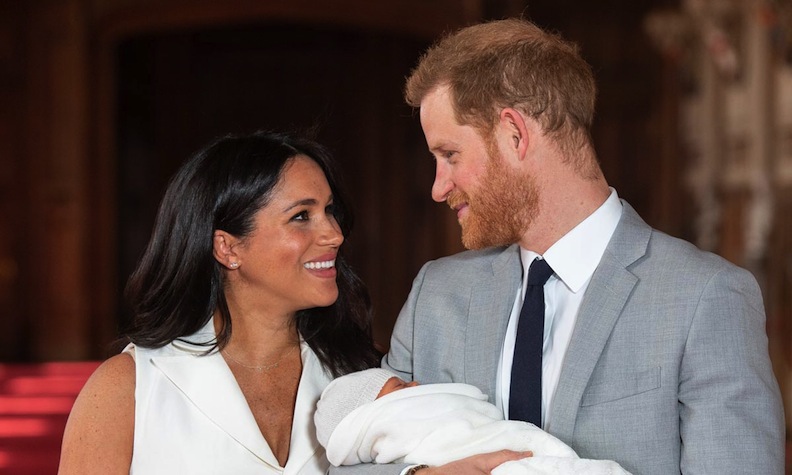 Prince Harry upped the ante and did the unthinkable! He cradled the baby himself, breaking centuries of tradition. (Courtesy Royal Sussex Press Office)

Seventh in line for the throne, Archie has no real chance at becoming the king of England. Rather, he’ll remain on the outskirts of that privileged existence, receiving many benefits but not the big reward. (Think of it as “Game of Thrones,” and he’s someone other than a Stark sibling. He has no shot at that prized position.) Still, he will have opportunities and a lifestyle that is materialistically far and above the rest of us mere plebeians. 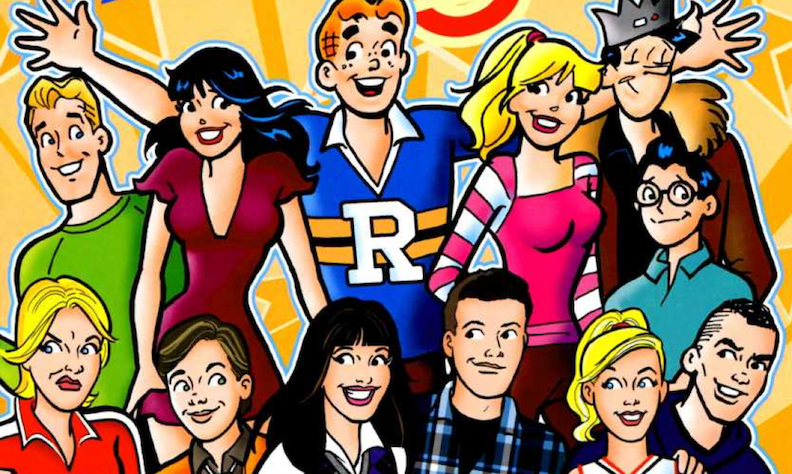 The British press labeled the name “Archie” as “decidedly middle-class” and “not prestigious.” Here in America, we love Archie Comics and their spin-offs.

Interestingly, while we Americans had giddy and cheerful responses to the name choice, the Brits were characteristically catty and snide. We conjured up connections to Riverdale’s all-American redhead Archie Andrews — Harry’s a ginger, after all — and even to dapper, debonair actor Cary Grant. Yes, Cary Grant, the epitome of style, sophistication, and self-possession, is really named Archibald Leach! He grew up as a Cockney, dreaming of self-advancement and hopes for a richer future. He attained all that when he became a Hollywood leading man and heartthrob. The talented Mr. Grant never forgot his origins. He never forgot that he was actually Archie Leach from Bristol. In fact, one of his most famous quotes is “Everybody would like to be Cary Grant. So would I.” 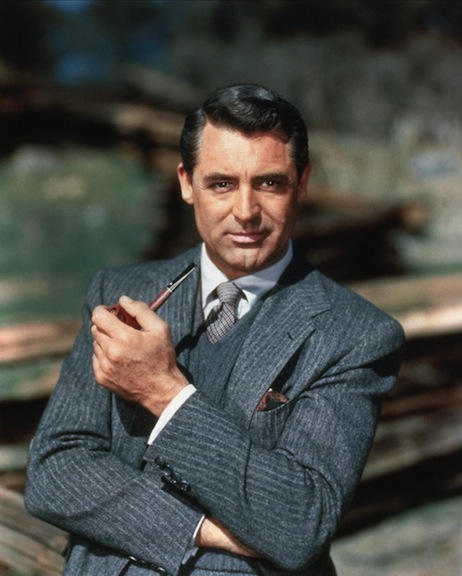 We’ll watch the websites and see what baby doll photos come our way. It could be a cultural, collectible divide. Perhaps an Archie royal baby doll will become a big advertising promotion in legendary black media, like Jet, Ebony, or online, like MadameNoire. We’ll have to wait and see. 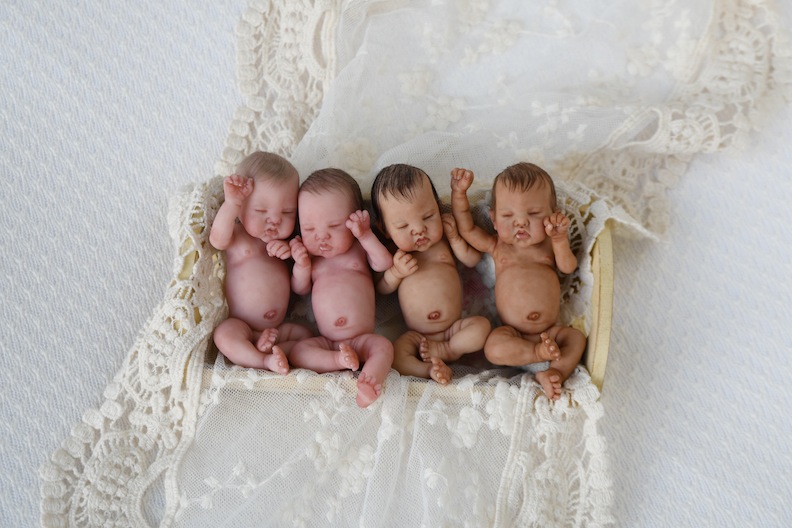 An array of “Eva” babies by Maria Lynn Dolls. Each baby is a beautiful shade, mirroring the realities of the world. Perhaps an Archie royal baby doll will be delivered soon?