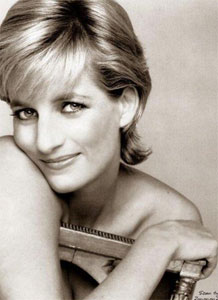 Diana was a gorgeous woman—though she was insecure about her looks. 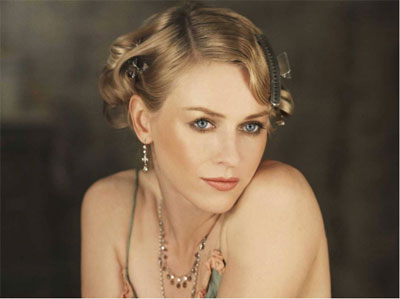 Naomi Watts is a talented actress who can pull off any role. Can she play Diana? 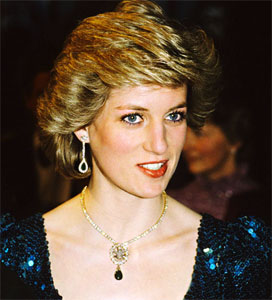 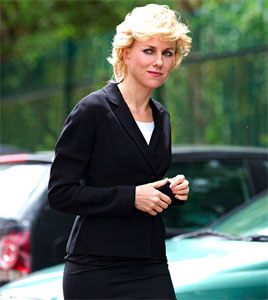 With her newly cut hair and spot-on suit, Naomi Watts has caught Di’s look in the movie “Caught in Flight.” 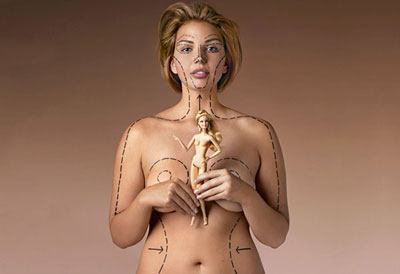 Famed photographer Matthew Rolston shot this mock-up of what an “average” woman would need to do to have the physical attributes of Barbie. 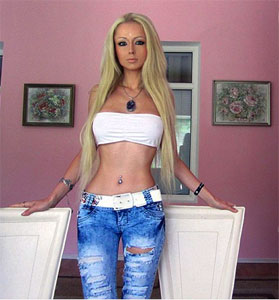 Known as the “Ukraine Barbie,” Valeria Lukyanova has spent endless amounts of cash to appear like a “living doll.” 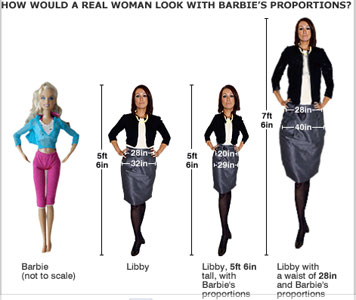 The chart says and shows it all! 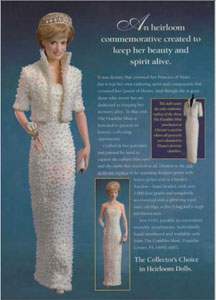 If a doll has to be mirrored in real-life mirrors, perhaps the Di doll is the way to go? 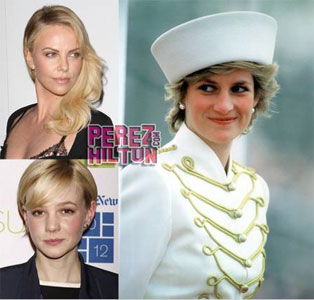 Charlize Theron and Carey Mulligan were both early runners to play the short-lived royal. 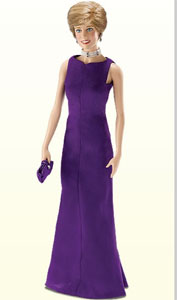 The dolls of Princess Di offered collectors to share in a slice of sartorial history. Di had closets and closets of clothing and accessories. 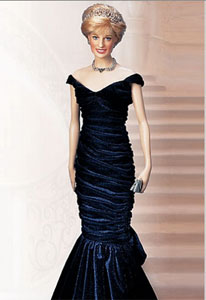 Sleek and sultry, Di was a head-turner. Her gorgeous eveningwear was meticulously re-created by doll companies. 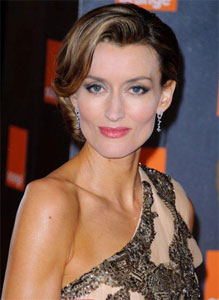 Hardly any makeup or adjusting would be needed to turn Natascha McElhone into the Di character.

Last weekend was an eye-opening experience for me. I was visiting a friend’s home, which is filled with knickknacks, figurines, assorted porcelain trinket boxes, and a myriad of mohair Teddies. My friend, Lynda, loves to acquire items that she perceives as having “value.” For Lynda, the value can be sentimental or aspirational. For her husband, Steve, it should be financial, not inspirational.

Among her “treasures” are a host of Princess Di commemorative articles. Lynda went to town with the purchasing of the People’s Princess keepsakes: plates, cups, eggcups, ashtrays (even though she doesn’t smoke), and clocks. She has most of these mementoes packed up and put away, preserving them for future debuts on eBay or WorthPoint. The selling of her souvenirs is one of the many ways she figures she’ll pay for Kate’s college education. (Kate is currently 9.)

Now, one of the collectibles that Lynda refuses to warehouse is the array of Princess Di dolls. She has them from Franklin Mint and Ashton-Drake, as well as other companies that got caught up in the “feeling frenzy.” (Remember, during her short life, Diana was all about empathy, caring for the less fortunate, visiting and hugging people living with AIDS, battling on behalf of landmine victims. Emotions were as central to her image as her tiara and short, well-kept coiffure.)

The dolls smile in that Mona Lisa–ish way that Diana perfected. There is a shy sadness behind the eyes, and the smile often seem rehearsed and polished for special-occasion picture days. (It’s sort of the forerunner for poor Katie Holmes and the endless grins she’d been forced to flash during her disintegrating marriage to Tom Cruise.)

As fate would have it, a gossip TV show trumpeted during my visit that a Princess Di biopic is in the works, and it is starring Naomi Watts as the charismatic but tragic royal. That’s fascinating casting, because Watts is way into her 40s. As my mom used to say, she’s no “spring chicken.” Still, Naomi is a very beautiful woman, with compelling eyes and a face that can show all ranges of emotions. As I said, Di was all about the emotions.

We were casually chatting about the casting of a 43-year-old actress to embody Diana, who passed away at 36, when Kate came wandering into the room. She saw the images of Diana on the screen, and the pictures of Naomi, and commented loudly: “Wow, Mommy, those ladies are going to play your dolls!”

“Play with my dolls?” Lynda asked.

“No, play your dolls. Be your dolls,” Kate explained.

And then we realized something extraordinary: Kate, born in 2003, never knew the real-live Diana. She’s growing up with the vinyl and porcelain likenesses surrounding her, but to her mind-set Di is a doll, has always been a doll, and will remain a doll. (And if the film “Caught in Flight” does well, perhaps she’ll be a doll all over again.)

It’s interesting to realize that for this little girl, the original historical person has no meaning. She’s always been a souvenir—a likeness that’s been manufactured and glazed. It was quite fascinating to realize that for Kate there’s no knowledge of the real woman, and to her thinking it made perfect sense to have a movie based on her mother’s pretty dolls.

She saw Naomi Watts decked out in hair and makeup and figured, “Hey, that woman wants to look like my mother’s dolls.” Actually, that’s quite a logical assumption to make—particularly when there are people like Valeria Lukyanova, “the Ukraine’s Living Barbie,” bouncing around.

The news—and especially Yahoo’s Home Page—buzzes with photos and videos of women who have decided to spend thousands and hundreds of thousands of dollars to look like “the plastic princess of perfect pulchritude” (try saying that five times).

The after-surgery effects of the cosmetically enhanced living dolls are often scary. Though these women have attained Barbie-like dimensions—busts that seem to be bursting at the seams; waists that are whittled down to nonexistent—they don’t appear perky or joyful or radiant. Barbie, for all her gravity-defying measurements, never seems hardened or hard-core to me. Somehow or other, the Mattel designers have made her appear like a perennial girl next door—and not the gals who live beside Hef’s Playboy Mansion.

Since women are known to drop big wads of cash to approximate the appearance of a $15 pink-box creation, perhaps the new wave of the future will be a desire to capture Diana’s silhouette and attitude.

There could be far worse role models than Diana; and though she had her detractors, no one could ever downplay her genuine love and affection for her sons, for the hospital-bound patients she visited, and for the orphans of war and famine that she embraced and crusaded for.

Naomi Watts has big pumps to fill as she tries to emulate Di in the last two years before her unexpected demise. Good luck to her, and may she keep the memory of Diana alive and not sullied for the millions of people who still harbor affection and appreciation for the approachable princess.

For our money’s worth, Lynda and I agree that Naomi will do a good job; she’s a capable and reliable actress. However, Lynda thinks that Charlize Theron, who was initially set to star, would have been a much better selection. (“She’s so regal and glamorous. She just physically towers over everybody already,” Lynda points out.)

I, on the other hand, think that Natascha McElhone (star of TV’s “Californication”) should have been tapped to play Princess Diana. The woman just has to have her bangs clipped and she is Di reincarnated. Honestly, no makeup, no prosthetics, and no cinematic tricks would be required.

What do you think? Who do you think should be playing Princess Di in a film of her later years? And, if you had to have cosmetic enhancements to be a living doll, would you be Team Barbie or Team Princess Di? I’d love to know!