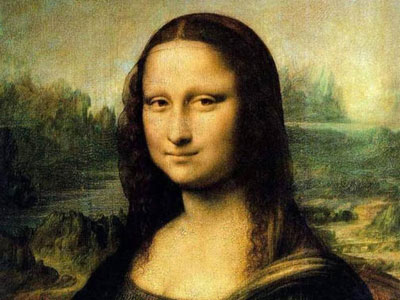 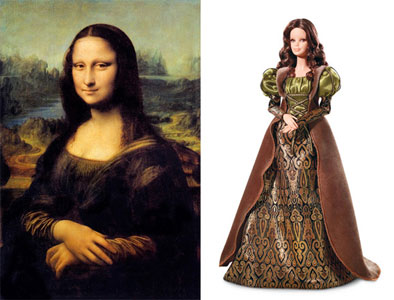 You’re so like the lady with the mystic smile. (Barbie as Mona Lisa) 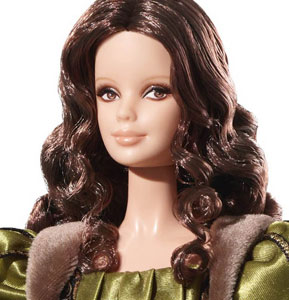 Is it only cause you’re lonely, they have blamed you, for that Mona Lisa strangeness in your smile? 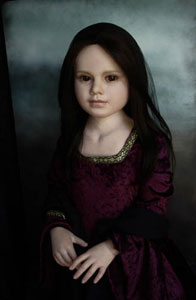 Do you smile to tempt a lover, Mona Lisa? Or is this your way to hide a broken heart? (Anya’s Originals, Reborn and Art Dolls) 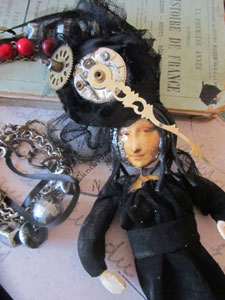 Many dreams have been brought to your doorstep. They just lie there, and they die there. (Poppy in the Sky, Steampunk Mona) 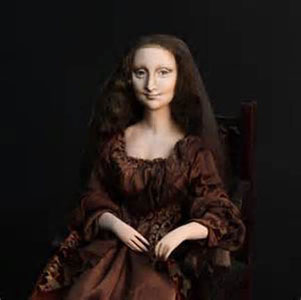 Are you warm? (Dolls by Darya) 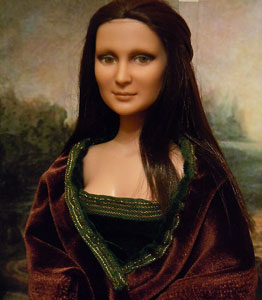 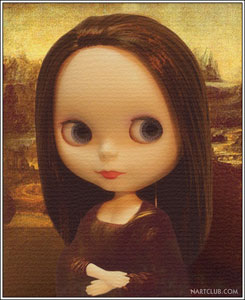 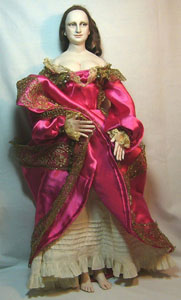 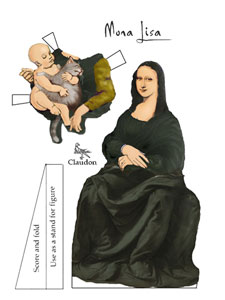 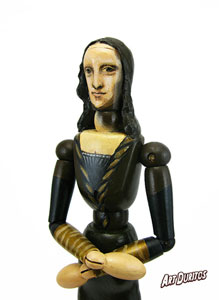 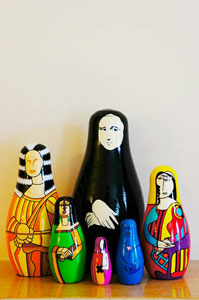 I love a mystery. My bookshelves are lined with the likes of Agatha Christie, Ngaio Marsh, Barbara Vine, and Ruth Rendell. (Yeah, I know, Barbara and Ruth are the same person—Ruth is the real name, under which she pens traditional police procedurals, and the other is reserved for more potboiler, macabre, and psychological whodunits.) I also used to have quite a collection of Anne Perry titles until I learned when Anne was a teenager, she actually participated in the cold-blooded murder of her friend’s mother. (See the Peter Jackson movie “Heavenly Creatures” and it is chilling and jaw-dropping.) That realization of her criminal past made me give all of her books away: it’s one thing to imagine murder—it’s another to commit it.

So, I adore mysteries and unsolved riddles and enigmas that continue to tease the brain and taunt our sensibilities. I like finding clues; I have fun trying to outguess a cleverly constructed plot; but in real life, I do admit I like some things to remain unknown.

Case in point: the woman behind the famed Leonardo da Vinci “Mona Lisa” painting. Some people have presented the case that it’s not a female at all, but rather a disguised self-portrait of Leonardo. (Think Shakespeare and how all of his female characters were portrayed by boys and young men in skirts!)

Others have fought that “Mona Lisa” was a beautiful prostitute with whom da Vinci was besotted. He immortalized her with the portrait.

And what about that closed-mouth smile? The most recognizable grin in art history has been likened to a Cheshire cat’s know-it-all smirk; others have said it is a symbol of sadness hidden behind a vain attempt at mirth. Busting through romanticism, some aficionados have speculated that the model had bad teeth and didn’t want their rotting composition to ruin the careful illusion. Fascinating to think that a trip to a dentist or an orthodontist would have rendered this painting just another smiling, pretty face.

However, all of these possibilities are going to (possibly) fall to the wayside if forensic art anthropologists get their way. Like a scenario from a Dan Brown novel—he wrote “The Da Vinci Code”—crypts are being pried open; bodies are being exhumed; and DNA is being tested to uncover just who is the centuries-old prima donna.

It’s now believed that the woman in question was named Lisa Gherardini. Three years after Columbus set sail—in 1495—young Lisa married a well-to-do, successful merchant. She was 15 years old when she wed the much older man, becoming his third wife. After tying the silk knot, she was now known as Lisa del Giocondo, spouse to Francesco di Bartolomeo di Zanobi del Giocondo. Francesco made his fortune in silks, cloth, and fashions. Lisa, now married into that rarified lifestyle, was known as “madonna,” or “my lady.” The title was further abbreviated to “mona.” Uh-huh! Amazing!

Historian Silvano Vinceti has been mining the crypts beneath Saint Ursula Convent in Florence, where Lisa was buried. She retired to the nunnery after Francesco died and her five children were independent of her. Locating skeletons in this sacred burial spot—subjecting them to carbon dating—and then rifling through the crypts of Francesco and their five sons—extracting DNA from them—will supposedly give the final, verifiable word. It might just be revealed that the source of the Nat King Cole song was a young, well-off wife and mother—a 25-year-old housewife and merchant’s spouse named Lisa Gherardini del Giocondo. (http://video.search.yahoo.com/video/play;_ylt=A2KLqIHxpgZS4h8Ayf37w8QF;_ylu=X3oDMTByZ2N0cmxpBHNlYwNzcgRzbGsDdmlkBHZ0aWQDBGdwb3MDMg–?p=Nat+King+Cole+Mona+Lisa&vid=43b3f91f59c5d41b1b761ef40d7ccd7b&l=&turl=http%3A%2F%2Fts3.mm.bing.net%2Fth%3Fid=V.47010446)

The painting was commissioned about 10 years after her marriage, and one can only imagine what thoughts were sailing through her head as she posed. Was she thinking about her husband and the comfortable existence he had granted her? Was she imagining her sons playing at sword fighting and running about her courtyard as tireless little scamps? Was she musing about a lost love, or conjuring up a new one? Even though she was married, were she and Leonardo “an item,” as the gossipmongers, with tongues wagging, might say?

The eternal appeal of Mona Lisa has always been that not only is her smile a blank slate—a reaction that we can attribute anything to or about—but that her identity has been murky and cloudy and a puzzle that lets imaginations soar.

And soar they have! Mona Lisa has been the inspiration for clothing design, scarves, jewelry, eyewear, and even shower curtains! She’s also been the catalyst for doll artists and manufacturers alike.

Naturally, Barbie has been re-created in the likeness of the da Vinci muse—and repaint artists have had great success in taking that mesmerizing face and converting a fashion doll into her Renaissance allure.

If there weren’t that Sphinx-like enigma about her identity and the reasons for her silent smirk would she have garnered so many doll tributes? I don’t know. Perhaps that is the one mystery that will remain intact . . . 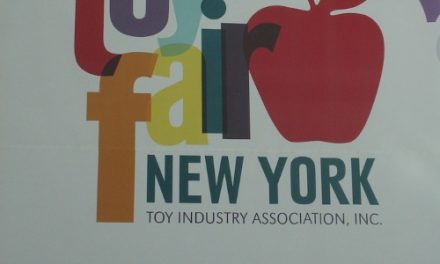