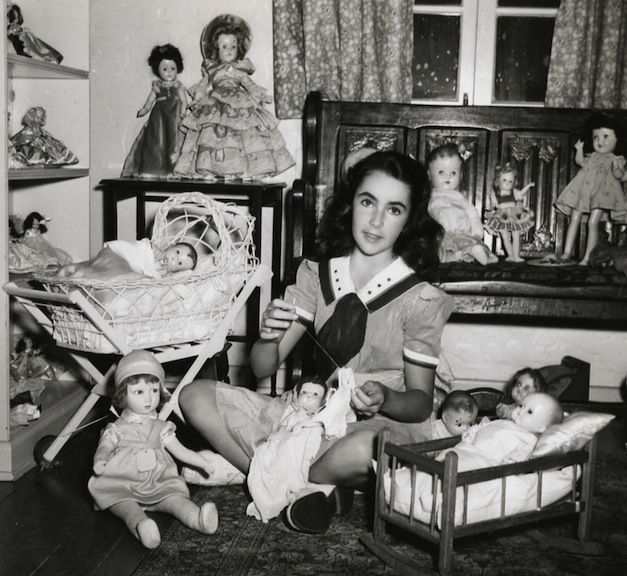 A young Liz Taylor in an idealized childhood setting

If a child’s toys can determine her grown-up occupation—medical bag for aspiring doctors and nurses, plastic horses and combs for equestrian groomers and riders—then what does a child star’s carefully chosen toys say about her future roles and curated persona? In the case of Elizabeth Taylor, who was never not famous, her juvenile roles never fit the mold of cute, mischievous kid or sassy, fun-loving little sister. Liz, who always looked glamorous and had a mature face, but on a pre-teen’s body, was called upon to play children with tormented secrets, life-draining illnesses, and a commitment to rise above adversity. “La Liz,” as she was eventually called, was drafted into playing parts that called for an actress, not just a sweet demeanor and a pretty complexion. 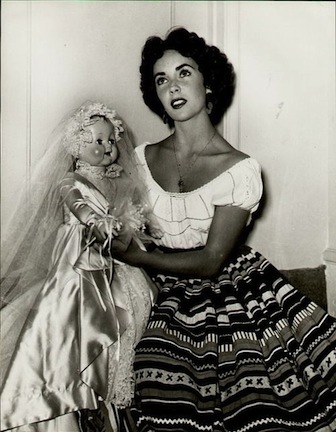 Liz with a bride doll

It’s funny, then, how Taylor was often paired with dolls in her onscreen roles, and in her publicity stills. For “Father of the Bride,” she blithely smiled for the camera, but her eyes don’t seem to reflect her impending “I do” bliss. Married multiple times, Liz never shied away from that two-word marital vow. However, she should have uttered, “I can’t.” She just wasn’t meant to be a longtime wife. Instead, she was better suited for serial monogamy.

In many of her movies, Elizabeth Taylor plays a woman who is at war with her overt sexuality and the inner child who dwelled within. Her neurotic, emotionally maladjusted wife in “Raintree County,” which I blogged about previously, refuses to give up her collection of porcelain dolls. Her Southern belle character, Susanna Drake, is both the passionate temptation and the deranged downfall for her exasperated husband, John Shawnessy (Montgomery Clift). He can’t live with her, and fears that his only salvation is to live without her … and her coterie of collectibles. It is a potboiler film where Taylor is allowed to look positively sensuous, while acting spoiled and childlike. The dolls aid in that performance. 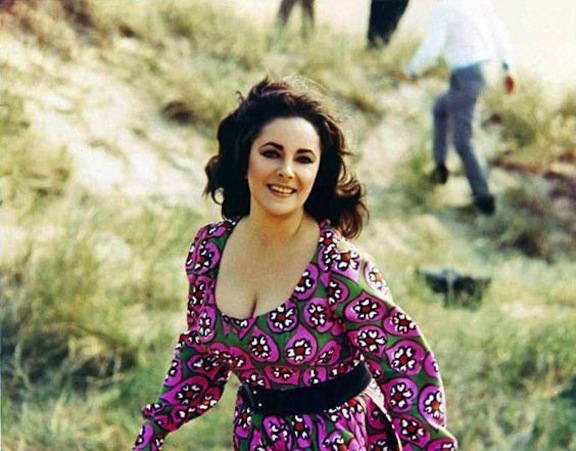 At 36, Liz was considered washed-up. Here she looks gorgeous.

While “Raintree County” is an early-adult film for Liz, it was made in 1956 when she was 24 years old, “Secret Ceremony” marks the decline of the Taylor brand. Filmed in 1968, Liz is only 36 years old, but she might as well be 86 in the eyes of Hollywood producers. She was considered past her prime, and had decided that she didn’t want to monitor her weight any longer via amphetamines and studio-prescribed pharmaceuticals. (“Dr. Feel Good, a Miss Taylor here to see you.”)

Still looking radiant and glamorous, voluptuous and powerful, Liz was written off as being too symbolic of the 1950s. While younger actresses of the 1960s were thinner, flatter-chested, more counterculture than “cultured,” Liz stuck out like a sore thumb, with the Hope Diamond attached to it. She wasn’t a hippie who could blend into a commune. Rather, she was a Golden Age actress with an hourglass figure who had hips and had attitude. She was an anomaly. 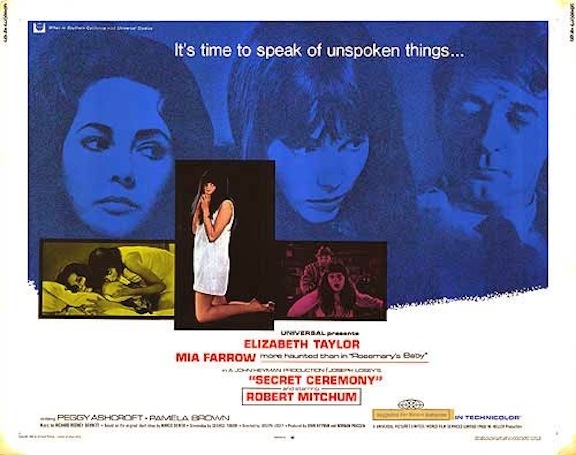 Being marginalized by top-tier producers and studio executives, Liz threw in her lot with independent producer/director/screenwriter Joseph Losey. She made two films with him, back to back. “Secret Ceremony” is an absolute train wreck, but it’s like watching the wreck of the Orient Express. It is dripping with star power (Taylor, Mia Farrow, Robert Mitchum, Peggy Ashcroft) and incredible costuming. It is also chock-full of dolls, more dolls, some stuffed dolls, then plastic dolls, cloth dolls, and then some  stuffed animals. It is a collector’s paradise—a film that would have enraged Monty Clift even more than the set dresser did on “Raintree County.” “Secret Ceremony” is rarely screened anymore, but TCM has acquired the rights to it and has been playing it on its “TCM Underground” program (late-night Fridays) and it has been available on the TCM Watch app. 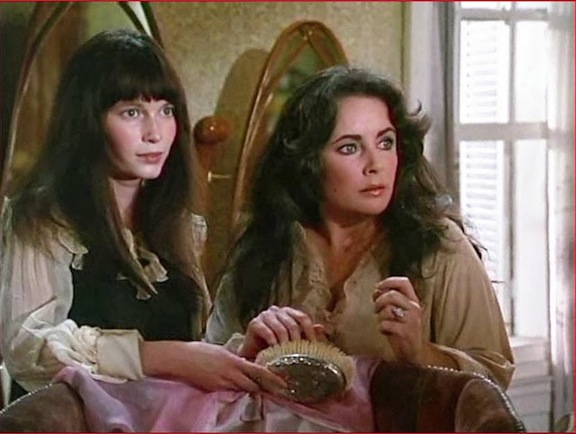 Mia Farrow, as an emotionally stunted young woman, who believes Taylor is her mother

What’s fascinating about this long-forgotten flick is that Taylor plays a woman who once again is engaged with dolls, mania, mental illness, and backward emotions. Rather than being the psychically stunted character—a 23-year-old Mia Farrow has that honor—Liz plays a woman who masquerades as Farrow’s mother. Yes, Mama Mia, at 36, La Liz is acting as the mother of a 23-year-old woman, but such is the lot of an actress who grew up on a Hollywood backlot.

Mia, of course, looks younger than her 23 years—she’s playing 22!—and she conducts herself like a 12-year-old or even younger. Attached to her dolls and her stuffed bears, she is a poor little rich girl who has never grown up. Mourning for her recently deceased mother, she stumbles upon Liz Taylor riding the bus one morning. Lo and behold, Taylor is an absolute dead ringer for the late mama. She agrees to go home with Mia, and then finds herself role-playing the part of the dead mother. 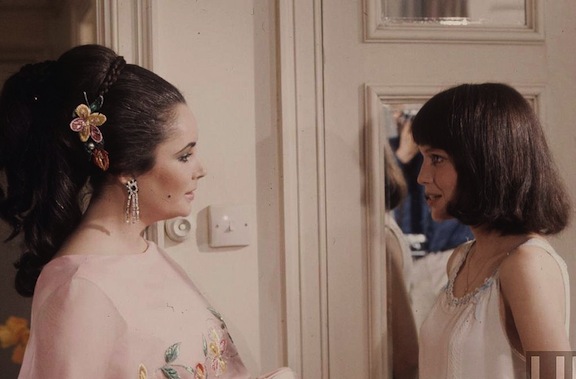 Liz Taylor decides the “insanity” is worth it, in order to wear lovely frocks and jewels.

Now, most people wouldn’t agree to such a bizarre arrangement, but the filmmakers show us how Liz is a down-on-her-luck prostitute. Tiring of sitting on park benches—yes, that’s a line from the film—she sees this new gig as a great way to wear fancy clothing, huge jewels, and designer furs. All she has to do is pretend to be the cold and uncaring mother of the character Cenci, a kooky, feral, needy chick! 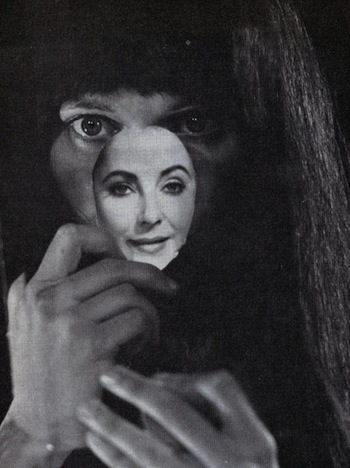 Farrow’s character constructs a Taylor paper doll, to see how she would look as a glamorous woman.

The film utilizes Farrow as a perennial girl-child. It came out the same year that “Rosemary’s Baby” did, and it capitalized on that blockbuster by referencing the Polanski movie in its film trailer. This, however, is no “Rosemary’s Baby.” While we find out that—spoiler alert—Satan is the papa of Rosemary’s infant, in “Secret Ceremony” we are left wondering who is Cenci’s father, why is her stepfather Robert Mitchum always skulking about (and why does he have an Abraham Lincoln beard), and how can Liz Taylor’s character look so much like Farrow’s passed-away mum. 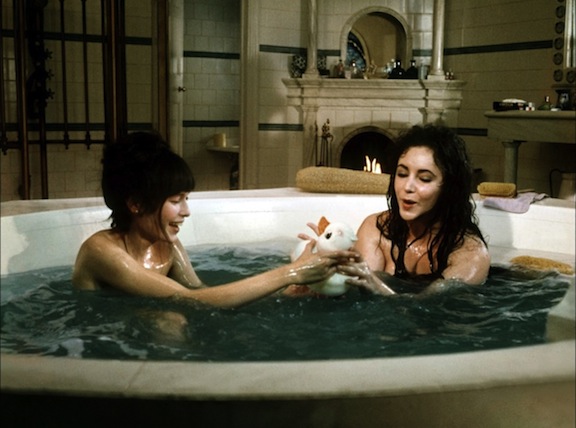 Liz and Mia bathe together; while Liz’s character frets about drowning deaths.

Additionally, Liz is mourning the death of her own child, who drowned, and she can only recall by studying her Communion photo. We see that she becomes attached to proxy daughter Cenci because it is a way to reconnect with her own lost child. Because of this desperate need, Liz wants Cenci to remain in a juvenile state. She wants her to keep playing with dolls and toys; the more time spent with dolls means less time in the clutches of the suspicious and ill-intentioned stepdad.

“Secret Ceremony” is filled with titillating (for the time) details. There are shots of Liz and Mia half-undressed, slumbering together, and seeming to cross the boundaries between mother and child. Nothing is ever explicitly said or shown; it is all implied and whispered about. 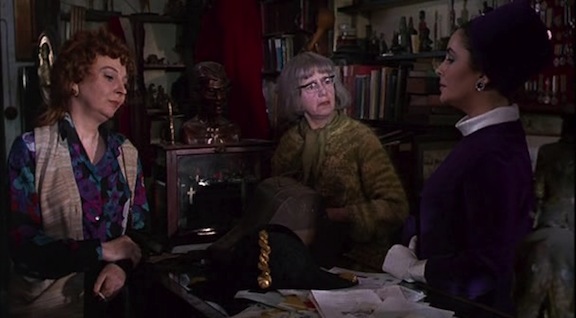 Pretending to be a brash American, Liz confronts the doll thieves.

For doll collectors, this is a chance to once again see Liz Taylor in a performance that demands she holds her own against dolls of all shapes and sizes. Trying to keep her pretend daughter safe from a lecherous Mitchum, Taylor is an avenging angel. She even confronts two seemingly genteel women who run an antiques store. Suspecting they’ve stolen one of Cenci’s dolls, she demands the doll be returned. In an aggressive act of tug-of-war, she fights the women for the stolen property, but the doll does become “drawn and quartered.” It loses its limbs, torn from its delicate torso. 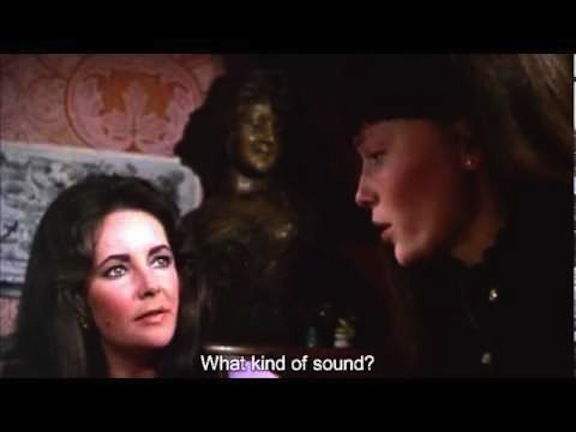 Faces pop up all over the mansion, always spying and witnessing

We see at that moment, that is what Liz is willing to do to keep the memory of her drowned daughter alive, and that is what she would do to preserve Cenci’s elongated childhood. She’ll swoop into the bowels of hell and will fight—be damned the consequences—to keep everything as she wants it. 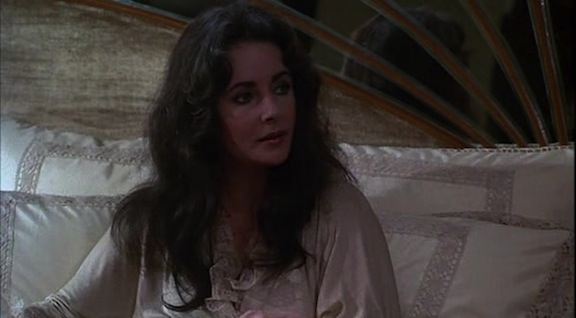 Liz wakes up in bed, in full makeup 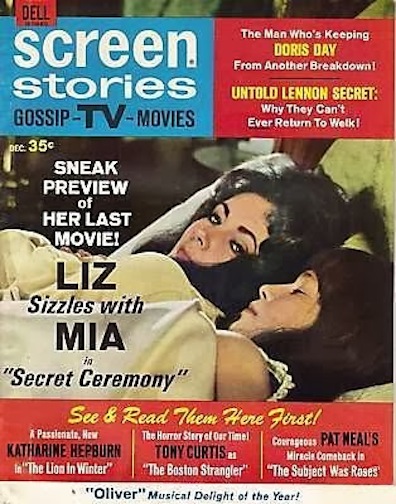 That’s the dirty little secret, and, thank God, Liz is on full display, fighting over dolls and wearing eye shadow like there’s no tomorrow.

If I Could Buy Any Doll Today