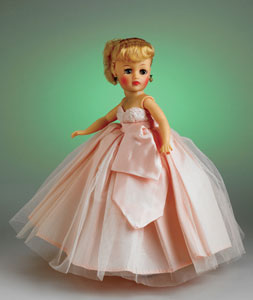 Classic 10-Inch Revlon Doll – The classic “Little Miss Revlon” has rooted Saran hair and wears a gown made of taffeta and tulle with a lace overlay on the bodice. A very popular doll, she had more than a hundred different outfits in her day! 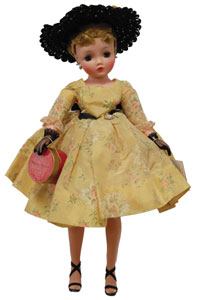 Cissy Starts a Trend – Madame Alexander’s Cissy started the modern fashion-doll revolution in 1955. Cissy set the standard for fashion dolls at the time with her “grown-up” bust and feet sculpted to wear high heels. 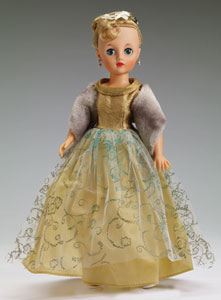 Uneeda Fashion Doll – This all-original doll is marked VT 18 — the same markings as the Revlon doll. It’s believed that this doll was made from a mold taken from an original Revlon and that the manufacturing process caused her to shrink one inch. It’s possible the two companies made an arrangement at the end of the Revlon life span. 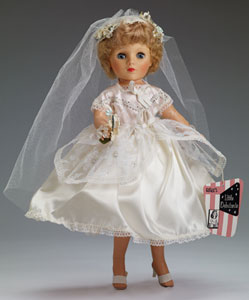 Eegee Little Debutante – Little Debutante was available in many sizes; this sweet little bride doll is 14 inches tall. Made to compete with the Revlon doll, Eegee’s doll was much less expensive and not as well made. However, she can be quite charming when found in mint condition. 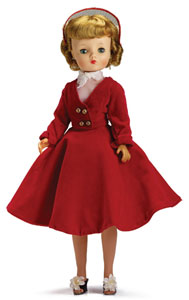 21-inch Bell Doll – This Bell doll is quite an impressive model, standing almost 21 inches! At first glance, she looks very much like Madame Alexander’s Cissy, which was probably the intent. The doll has a hard plastic body with a vinyl head and rooted hair, while Cissy had a hard plastic head with a glued-on wig. 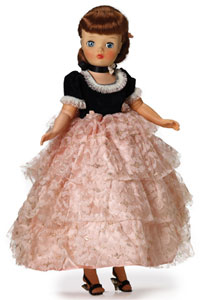 Horsman Cindy Doll – Another doll with a Cissy look, Horsman’s early Cindy dolls had a one-piece body with arms jointed at the elbow and shoulder. Cindy came in many sizes and was popular at the time, as she was both glamorous and less expensive than her competitors. 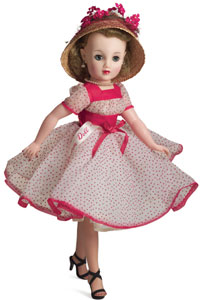 Revlon 20-inch Cherries à la Mode Doll – The Revlon doll was the most popular fashion doll of the late ’50s. She came in many different sizes and styles. The Revlon name was licensed from the makeup house. The goal of Ideal, which made the doll, was to make the most beautiful doll ever! 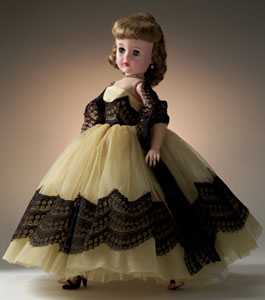 22-inch Revlon Glamour Doll – One of most beautiful dolls of the late ’50s was the 22- inch Revlon doll. This example wears an extremely rare gown of black lace and tulle. 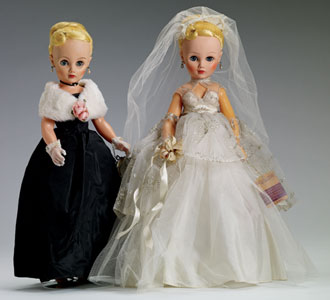 14R Dolls – The very popular 14R head mold was used by a number of companies during the late ’50s. The 14R head mold looks somewhat like a thinned-out Revlon. These dolls, depending on the manufacturer, can be quite beautiful. The doll on the right was made by Rite-Lee and is named “Miss Lynne.” The doll on the left is by Royal. 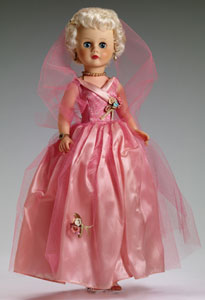 Jolly Fashion Doll – The Jolly Fashion doll is an interesting example of a late-’50s fashion doll with a look all her own. The 20-inch doll resembles neither Cissy nor Revlon, but does have a look of the generic child doll of the time.

Iconic fashion-doll designer Robert Tonner presents a condensed history of the modern fashion doll. Part I looks at the emergence of American doll manufacturing and the introduction of the earliest modern fashion dolls from 1955 to 1959.

The American doll industry is relatively young. During the late 19th century, the majority of dolls were manufactured in Europe, with Germany and France as industry leaders. Most dolls had made of porcelain or papier-mâché heads with composition or wooden bodies. French dolls were known for their exquisitely sculpted faces — they were highly stylized and could be very expensive. German doll manufacturers became competitive with French companies when they later introduced more real-looking (rather than stylized) dolls into the market.

Around 1912, composition became the most popular material for dollmaking. Made of wood pulp, glues, and fillers, it was considered more durable for dollmaking than porcelain. During this time, American doll manufacturing was almost nonexistent. Sure, a few American companies produced dolls at the time, but even fewer did their own sculpting. Doll heads and bodies were often imported from Europe to be dressed and sold in America.

All this changed during World War I. As importing goods from Europe became more and more difficult, toy and novelty companies began producing their own designs. Early American dolls looked similar to their European counterparts, but soon, American-made dolls took on a look and direction of their own that dominated dollmaking for decades. New companies were born out of the wartime shortage of dolls — Effanbee and Ideal were probably the best known, and Effanbee is still in existence today.

During the second decade of the 20th century, highly stylized character dolls were popular. Dolls such as Raggedy Ann, The Campbell Kids, and Kewpies did well for their manufacturers. Effanbee produced some of the fi rst Mama dolls in 1918. The dolls were so named because of a simple voicebox that said “mama” when the doll was hugged or rocked.

In the ’20s, doll manufacturing in America became a thriving business. The Bye-Lo Baby was extremely popular. Made to look like a real newborn baby, the doll was revolutionary for its time. During the latter part of the decade, Effanbee introduced Patsy, a 14-inch composition doll generally considered to be the fi rst with an extensive wardrobe and accessories.

During this period, the only doll that could be considered a fashion doll representing an adult was the boudoir doll. Made by various companies, they were very long and very thin and were used and sold more as decorations for the bedroom or parlor rather than as toys.

The 1930s was a decade of celebrity dolls. The Shirley Temple doll by Ideal dominated toy shelves, and licensed dolls featuring characters from such movies as “Gone with the Wind,” “Snow White,” and “The Wizard of Oz” were the best sellers. Baby dolls remained very popular. Effanbee followed up on the success of Patsy with the Dy-Dee Baby, a doll that could wet her diaper.

The ’40s brought huge changes to the doll world, as technical advances — especially the use of plastics during World War II — changed the way dolls were made from then on. Near the end of the decade, nearly all dolls brought to market were made of plastic. In the early ’50s, economically, America was doing very well, and the parents of the baby boomers had more disposable income than ever before. The toy industry thrived.

A New Kind of Fashion Doll

Fashion dolls were almost nonexistent during the first half of the last century. The dolls produced before 1950, with a very few exceptions, were dolls representing babies or girls. Doll play seemed to be geared toward nurturing or playmate types of play patterns. After 1950, a new type of play pattern emerged as girls began to look to the future, and aspirational play became popular — hence the advent of fashion dolls.

Sensing a market for a doll body that represented an adult female, Madame Alexander developed her Cissy doll in 1955. Cissy was unique in the doll world because of two things: her adult-like sculpted bust line and her permanently arched feet, meant to accommodate high-heeled shoes. Cissy was like no other doll of the time — in addition to her sculpted changes, her clothing was very sophisticated and glamorous. Madame Alexander used the finest fabrics and spared no detail on these deluxe dolls. The doll was revolutionary, and competing dolls entered the market in 1956. Almost every company had its versions of the adult fashion doll, with Ideal’s Revlon doll becoming the most successful.

Ideal acquired the Revlon license to make what was marketed at the time as “the most beautiful doll ever made.” At the time, if a doll was successful, the company would produce the doll in multiple sizes. Revlon dolls came in 10-inch, 15-inch, 18-inch, 20-inch, 22-inch, and the rare 25-inch sizes, with the most popular being the 10-inch and 18-inch dolls — good examples of both are pretty easy to find today.

Revlon dolls were dressed in lovely nylon prints, rayon novelties, cotton prints, and cotton velveteen made into fairly simple styles, with, in almost every case, a full sweeping skirt. Revlon hair was a wonderful rooted Saran which has certainly stood the test of time. Revlon hair styles are easy to restore and can look as good as new even today.

Another doll worth mentioning is the Horsman Cindy doll. Less expensive than the Revlon, she has a slightly Cissy-type look. She lasted a few years and was often nicely dressed.

During the ’50s, most doll production was done in and around New York City. Many doll companies used the same vinyl or plastic production companies. These plastic manufacturers would commission their own sculpts to produce their own versions of popular styles. These styles were then sold to manufacturers who couldn’t always afford to produce their own molds. One of the most popular molds was the 14R mold. The 14R mold has a sort of “pinched” Revlon-type face. The head and body were used extensively on fashion dolls in the late ’50s by such companies as Royal. Although many times these dolls are cheaply made, they do have a charm all their own.

Between 1955 (Cissy era) and 1959 (Barbie era), literally hundreds of styles of this new type of doll were produced. Some were breathtaking; some were, well, disappointing. The companies that produced lower-priced dolls, such as Horsman, Eegee, Uneeda, Belle Doll, Arranbee, and Royal, to name a few, produced dolls that resembled the two most popular dolls, Cissy and Revlon. Indeed, these offerings may have been sculpted by the prolific Bernard Lipfert, who had also sculpted both Cissy and Revlon.

However, there were some very creative fashion dolls released at the time. Eegee used a unique sculpt for some of its Little Debutante dolls, which have a very distinct look. Arranbee, perhaps inspired by the Revlon doll marketing, acquired a license from Coty cosmetics and produced a lovely Coty doll in both 10-inch and 18-inch versions. Effanbee also entered the fashion-doll market with a somewhat disappointing doll sculpt used for its Champagne Lady dolls.

In a short period, the fashion doll had become the toy doll, and the toy companies were comfortably on board. From 1955 to 1959 it was pretty much business as usual — however, things were about to change. Mattel, a young toy company based in California, was ready to rock the fashion-doll world, and it would never be the same again.

Look for Part II of Robert Tonner’s history of the modern fashion doll in the May 2013 issue of Haute Doll! 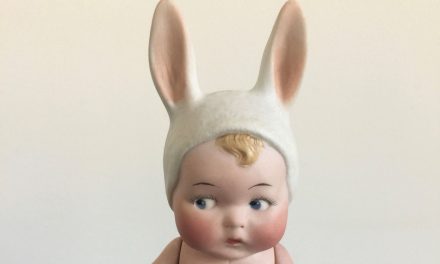