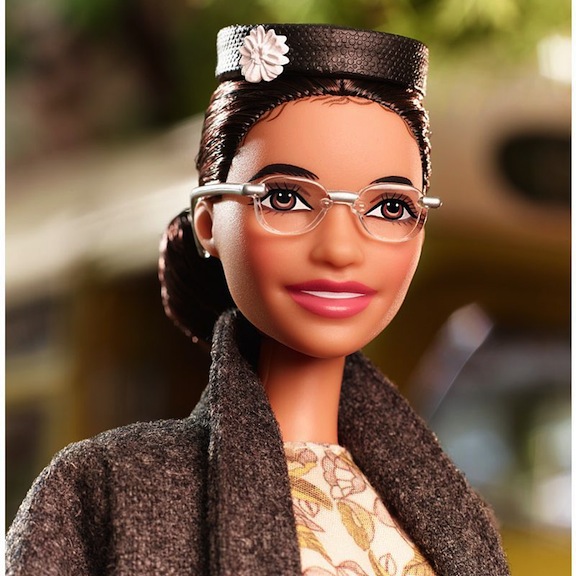 The Rosa Parks doll is a testament to taking a stand against injustice by remaining seated.

In the doll world, Mattel is best known for its Barbie brand. Secondly, it’s most famous for its collectible controversies. Over the years, Mattel has put its bendable arched foot in its mouth more times than can be counted. Whenever the toy giant strays from its comfort zone — curvaceous, bubbly teen model — it often finds itself having to apologize. Most recent case of sputtering and explaining: the Rosa Parks doll.

Unveiled on Women’s Equality Day, August 26, the Rosa Parks doll is part of Mattel’s Inspiring Women’s Series. In this lineup of meticulously garbed dolls, the Mattel designers salute women who have made a difference. In the past two years, cultural icons such as Amelia Earhart, Frida Kahlo, and Katherine Johnson have been made into dolls. Earhart and Kahlo have been famous for decades and part of history classes and feminist studies. Johnson was a lesser known real-life person. 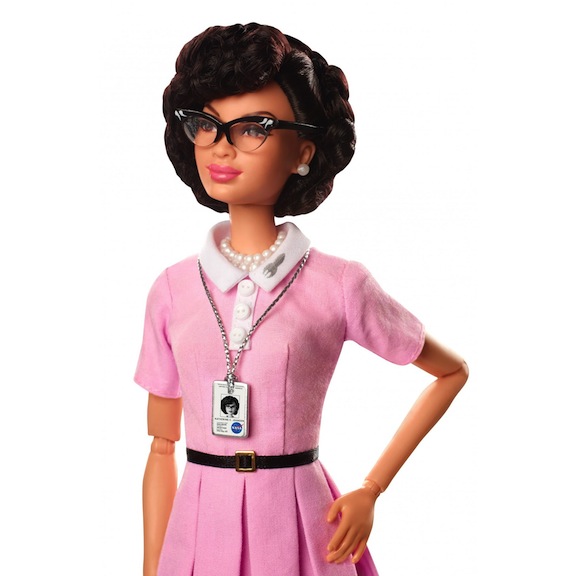 Brought to the foreground by the movie “Hidden Figures,” Johnson was one of NASA’s unsung heroes. An African-American mathematician, she and other team members worked in the background to ensure America’s victory in space. The motion picture introduced her story to the cinema-going public. The world of fiction embraced her factual struggles. With the Rosa Parks doll, fact and fiction collided once more.

When Mattel first showcased its announcement, it revealed the packaging for the Rosa Parks doll. Along with looking like Parks was aboard a bus, the box contained a write-up of why she was inspirational. This was where Mattel got in trouble. It described Parks as having led a quiet life as a seamstress until she refused to give up her seat on an Alabama bus. The box implied that this ordinary woman and her extraordinary act of defiance was the turning point in the Montgomery Bus Boycott and the Civil Rights Movement. 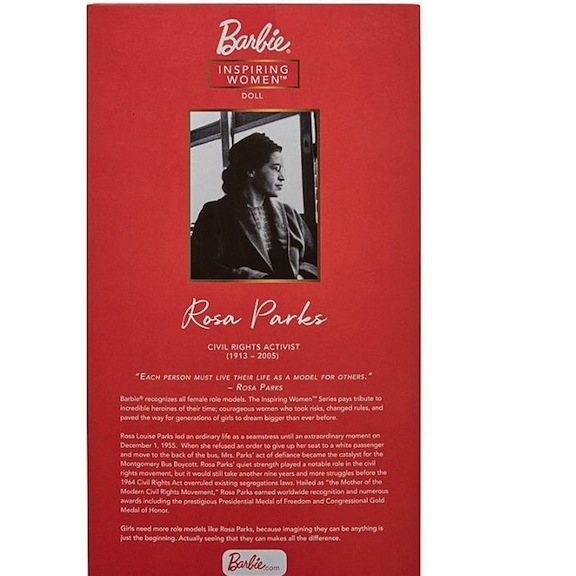 The initial box and website for the Rosa Parks doll didn’t mention her activist training and commitment.

What did Mattel get wrong? Well, Rosa Parks wasn’t a simple, tired, unassuming seamstress. Rather, she had been active in the civil rights movement of her hometown and had been trained in civil disobedience. When Rosa Parks boarded that bus on December 1, 1955, she had a mission in mind. She knew she would refuse to get up and give her seat to a white man. This wasn’t just a bus ride to a physical destination. Parks had been directed to refuse the bus driver’s order and to refuse to move to the back of the bus. She knew this would get her arrested, but she heroically rose to the assignment.

The Rosa Parks doll was initially packaged as though she was physically tired and had had enough. Mattel printed that version because that is how Parks had been presented to the world for almost 50 years. It wasn’t until the early 2000s that the backstory of Parks and her civil rights connections came to the light. 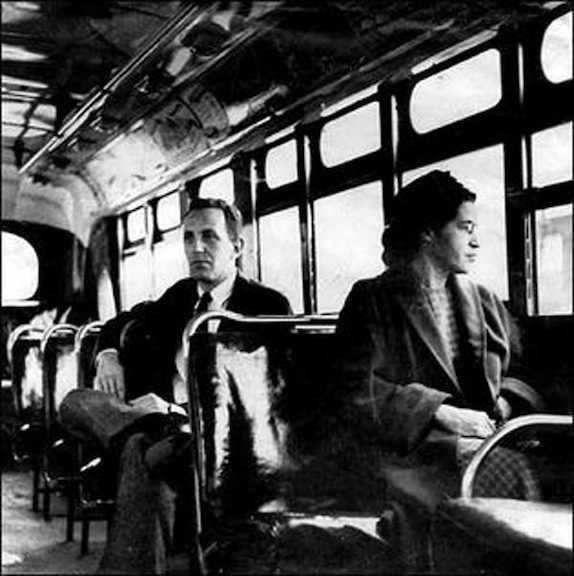 This photo of Rosa Parks, aboard a Montgomery, Alabama, bus, is one for the ages.

Initially, Rosa Parks was portrayed as inspirational because of her supposed ordinary lifestyle. The civil rights leaders of the time, the press, her family, they all assumed that her tale would resonate more if it was relatable. Most people are not activists, and many people are suspicious of those that are. By refusing to get up and stand, Parks had taken a major stand against racism and injustice. Her decision not to acquiesce captured the American imagination. This is a country founded on individualism, and her refusal smacked of a lone woman against an unfair system. That’s how it was covered, promoted, taught, and enshrined in history books.

The truth of Rosa Parks and her training has only been discussed over the past decade. In the age of activism (President Obama was a community organizer), her connection to an organization is no longer hidden. Past historians and cultural critics worried because her refusal wasn’t spontaneous. They feared that because it was planned, Rosa wouldn’t be seen as heroic and brave. That’s not the case anymore. “Activist” is now a career enhancer. Just look at all of the actors, singers, athletes, and authors who add that onto their résumés. 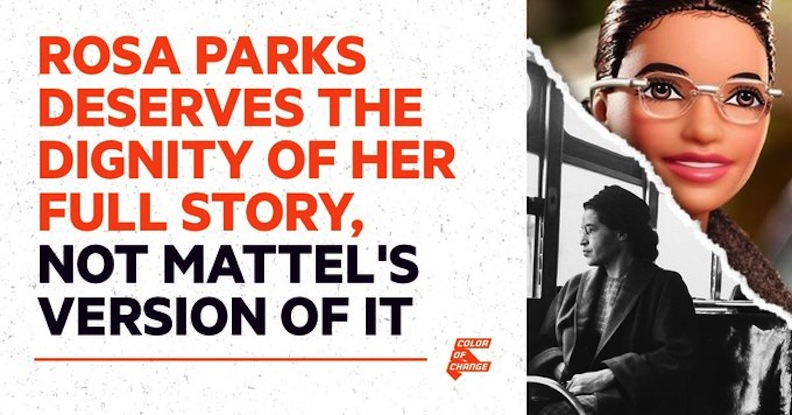 People took to Twitter to demand that the truth about Parks come out in the Rosa Parks doll’s storyline.

After the Mattel box first debuted, Twitter users took to their feeds to tweet outrage. Online petitions were mounted. Bloggers and reporters spoke out. Mattel has now updated their website to include Parks’s activist component. They listened to the complaints and have changed her storyline. Social media worked in this case to bring about change. Talk about life imitating art, and vice versa.

The Rosa Parks doll reflects what the actual Parks wore during her December 1, 1955, rebellion. She is clad in a hat, printed dress, coat, and gloves. She wears glasses and carries a clutch purse. The doll comes with a doll stand and a certificate of authenticity. 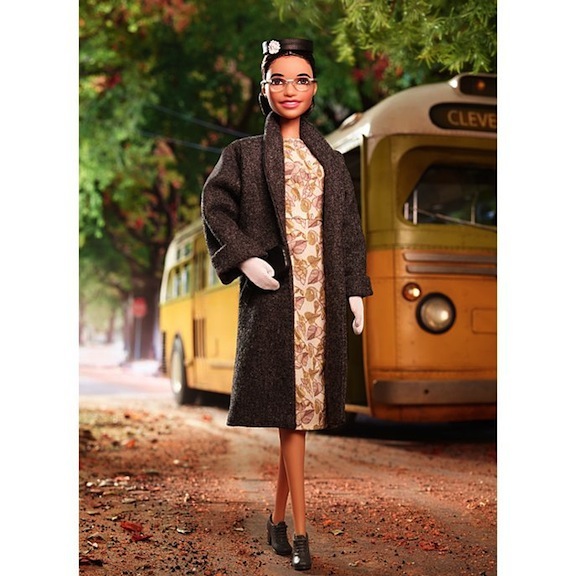 For generations to come, Rosa Parks and her refusal to stand up led to other women and men taking a stand for their beliefs.

Kelley Lindberg, who also sculpted the Katherine Johnson and Frida Kahlo dolls, is the Rosa Parks doll sculptor. The doll has a posable torso and an articulated knee. On the Mattel Barbie site, the Rosa Parks doll is already sold out. It can be ordered at Walmart, and the demand is very high. 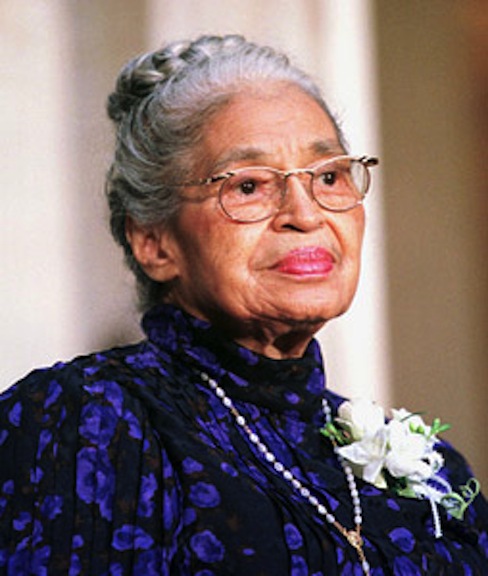 Rosa Parks died in 2005, at age 92. She was known as the “first lady of civil rights” and “the mother of the freedom movement.” (Photo courtesy of the History Study Center)

“Girls have always been able to play out different roles and careers with Barbie, and we are thrilled to shine a light on real-life role models to remind them that they can be anything,” Lisa McKnight, senior vice president and general manager of Barbie, stated. 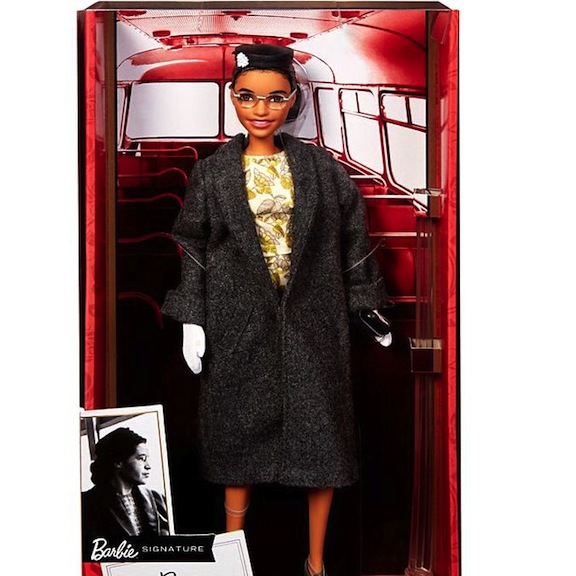 The Rosa Park doll box simulates the interior of a bus.

With the new Rosa Parks doll, Barbie has ventured into a part of America’s past that is fraught with pain, degradation, ugliness, and oppression. Those are hardly the moods associated with Barbie. However, Rosa Parks and other activists like her helped to resurrect the South from those awful institutions. The doll is a reminder of a recent past that seems unthinkable today. Hopefully, the Rosa Parks doll will represent a future of equality for all Americans for all time.

Still Enjoying Mirror’s Many Faces…and Wishing for Another