At the time, my intention was to cover Creedy’s doll-related charitable efforts in an article in an upcoming issue of the magazine, but somehow, it didn’t feel like enough. Next week at the office, it struck me that we needed to do an entirely charity-focused digital issue and call it “The Charity Issue.” Ten-percent of net proceeds from advertising sales in this issue will be donated to the charities covered in the article by Stephanie Finnegan, “From Hands and Hearts” (page 20 of the digital issue).

And if you like this issue, be sure to order the printed book (details on page 32 of the digital issue)—another opportunity for you to help us give back to a good cause. Ten percent of proceeds from book sales will be donated to charity as well.

At Jones Publishing, publisher of DOLLS, we’ve decided to expand upon the theme of giving in other capacities. This fall, for instance, at the 2010 Doll & Teddy Bear EXPO held in Winston-Salem, N.C., tangentially to the Modern Doll Collectors Convention, Jones Publishing held a charity auction, in which the generous dollmakers and teddy bear makers donated pieces. One-hundred percent of proceeds, $8,289.31, were donated to Family Services, Inc. (www.fsifamily.org)—a century-old charitable organization dedicated to serving families in Forsyth, Stokes and Davie Counties in North Carolina. Each year the group assists more than 5,000 individuals and families with an array of family strengthening programs, ranging from counseling to adoption and safe relationships.

“We understand the importance of Family Services, and we are confident that those involved are excellent stewards of the money they have received,” says Joe Jones, owner of Jones Publishing, of the auction proceeds donation. “For many, the organization certainly provides a bright light in their darkened world and an opportunity for a better future,” says Jones.
Additionally, Jones Publishing has decided to skip the company Christmas party this year in favor of redirecting part of the revenue that would have been used for the party to Rotary International’s efforts to eradicate polio. Jones, who is a long-standing Rotary International (www.rotary.org) member, says, “Since this effort began in 1985, Rotary has managed to reduce polio cases from over 200 countries to just four countries in the world, where it remains in just a few pockets of those countries. We are very close to complete success, but we feel it is extremely important to complete the task. For, just like fire, if it is not extinguished, it can quickly spread out of control.”

Also, every year, Jones Publishing adopts a local family in need during the holidays, and staff members contribute to providing the entire family’s Christmas gifts.

And Jones Publishing’s commitment to charity doesn’t go unnoticed by staff members. “Being from a small company, it makes me feel good to know we’re helping the big picture and that we can make a difference. It makes me proud of our company,” says the editor of The Crafts Report and Fired Arts & Crafts, Jessica Franchuk.

DOLLS art director Josh Buschkopf agrees: “Dolls have always play­ed an important role in nurturing dreams, bring­ing comfort and giving hope in difficult times. I’m proud to be part of a company that’s doing its part to help carry on this wonderful legacy by sharing with those who need it most.”

And I’m proud, too. I’m proud of the doll artists who constantly raise the charity bar to support those in need, I’m proud of Jones Publishing’s commitment to helping out as well and I’m proud we were able to put together this issue—to raise a little more awareness and to raise some funds for the worthy organizations who work tirelessly for their causes. Because if we don’t sometimes rise above self-involvement to become part of something larger than ourselves, are we really realizing our maximum potential as part of humanity?

Thanks for reading (and supporting)!

Yes, this photo shows the actual conversation Berdine Creedy and I had at the 2010 Modern Doll Collectors Convention that planted the seed in my mind that turned into The Charity Issue. 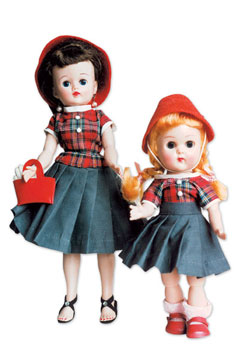