When it comes to Internet surfing, I’m like the Big Kahuna of the cyber waves. There isn’t a byte of information or a massive thread that I’m not willing to throw myself into (or onto, if we’re talking successful surfing). Recently, I came across a columnist from Chicago who was wondering if dolls were still wished for by anyone: Were there still little girls out there asking Santa for a “Betsy Wetsy” or a “Barbie” to call their own?

His conclusion was that, yes, there were a few, but they were the exception and not the rule.
To bolster the findings that dolls were still sought after by some waifs, retailers were interviewed, and they commented that the Monster High dolls from Mattel (which I blogged about a long, long time ago) and the Disney Princess dolls tied into the movie characters were still hot sellers. From good-looking ghouls to radiant royals, the dolls that were pined for were uniformly attractive and well-decked-out.

It makes sense to me. Dolls are wish fulfillment, and being “pretty” is still on the top of most young girls’ aspirations (and pretty high up for us old girls, too, for that matter). Living in a world of rampant nips-and-tucks, and out-of-control plastic surgery, we all have the potential to be just one Botox injection away from permanent Barbie-hood. Is that a good or bad thing? I guess you have to ask Ken.

It’s funny, but years ago, dolls used to be given to little girls not only for play and amusement, but for life preparation. Since more often than not, tiny Tina and small Sally would grow up to be moms, the baby doll was like a crash course in miniature—a little life lesson. The eager miss who would play for hours—changing the diapers, giving the bottles, staging elaborate burps and baths—was unwittingly getting ready for what she’d be doing over the course of her life, or until menopause hit her! 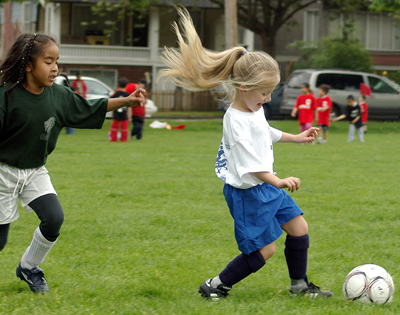 Now, that’s a bleak Christmas sentiment. If you follow this thread, then it’s akin to training and grooming a child into a role that has been picked out for her since her cradle days. Not a very merry musing for us 21st-century free-thinkers.

I wonder if the decline in little girls clamoring for dolls (and that is a sad fact) can be traced to the emergence and acceptance of the feminist movement. Have records been kept to see if there is a correlation between the disenchantment for baby dolls and the rise of Title IX and girls being included in after-school sports? I would be curious to know.

From my own personal experience, I sense that the little girl with her nose pressed up against a display case, oohing and aahing over an adorable doll, is a rarity. Most of the kindergarten and early-grade girls I know might have one or two dolls (given to them, not requested) and tons more stuffed animals. On top of that, they have a more palpable fascination with soccer, kung fu fighting, iPods, computers, and other toys that would have been considered “boyish” during my youth.

When I survey the friends I have (some married, more not), and even the married ones without children—and proud to be so—I start to think: Is this all the end effect of not being a doll-driven culture anymore? If kindergarten Katie isn’t force-fed the importance of feeding and caring for her baby doll, will she grow up NOT to care much about a real offspring one day?

I’ve never really considered the hand-in-hand connection between wanting to baby a baby doll, and then growing up to baby a real infant, but it has to be there. I mean, I can’t simply be imagining this!

Birth rates are down in Western nations, and the young women today who are confidently striding through their careers and their condos most likely did not sit on Santa’s knee and dream exclusively of dolls and strollers. I’m not saying that a thirty-something CEO was asking Santa Claus for a lunch box shaped like a briefcase or an exclusive gym-boree membership, but there is a very high chance that she was doing something beyond the brushing and combing of acetate doll hair.

What, then, does doll buying say about us and about our young girls today? If we buy dolls for our children or grandchildren to play with, are we “dooming” them to a life of household drudgery and frazzled daycare? Are we relegating them to a throwback life of domestic chores? Or are we showing them that there is much to celebrate in caring and loving someone outside of ourselves? Is the gifting of a baby doll an invitation to nurture another soul, a welcoming nudge into the world of selflessness, not selfish single-minded pursuits?

I’ve never really pondered the ramifications of Christmas gifts on a person’s future psyche, but it’s all become crystal clear to me. I remember one episode of “The Waltons”—one of my most favorite TV shows ever—where the whole family chips in to give John-Boy a ream of paper. When he opens up the paper—which honestly looks sort of cruddy and pulpy—tears well up in his eyes. He is moved beyond words, because this gift will allow him to put down his words, and his dreams, and will usher him into the world of being a writer.
I, too, was pushed into this world of dolls and writing—without even realizing it. With every doll I got for Christmas (and there were many), I would also get batches of Bobbsey Twins and Nancy Drew books, plus print-your-own newspaper kits, a Fisher-Price typewriter, then an old discarded metal typewriter, and finally a sleek beautiful hard plastic one (I thought it was state-of-the-art technology, and it was all mine).

Without knowing it, I was being set up to be a grown-up who loves to write, who loves dolls, and who loves to write about dolls! Just think of it: I’m like the Manchurian Candidate, but made by Mattel. I was programmed to be a doll junkie—I didn’t have a fighting chance.
So, everyone, when you go shopping this holiday season for the toys to surprise your loved ones with, or when you help your kids scribe their letters to Santa, be careful what they wish for. Apparently, the dolls and playthings of our early lives might be the source from which all future life springs! If there aren’t enough dolls bought and cuddled, could we be witnessing the end of civilization as we know it? (Insert dramatic drum roll, please.)

Now, that’s a Christmas sentiment that is more chilling than a Northeast winter morning. Here’s hoping there’s lots of dolls in Santa’s sleigh this year. I know I’m going to head out and buy an armload! Buy a doll and save our world!

(Visiting different Web sites, I see that for many young women, baby dolls might be passé, but the realistic teenage and adult BJDs seem to be inspiring lots of folk to express and expand their creativity. There may not be a Million Mom March in the future, but expect lots of female Oscar-winning directors.

In the Victorian and Edwardian Era, dolls were a staple of the nursery. They helped train the little girl to be a future good mommy (top).

Sure, some little girls still fit the bill of being partial to dolls and tea parties. More and more, though, are being encouraged to play alongside the boys on the sports field. Is this a great stride forward or a cultural upheaval?
.