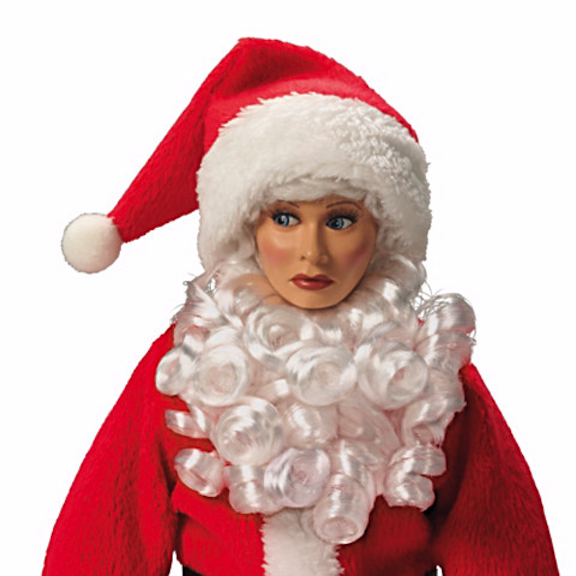 Many critics are saying that we are living through a new golden age of television. Interestingly, it’s not because of broadcast TV, which reviewers often pan as juvenile and crass, but because of the huge number of viewing options on cable TV. With basic cable channels, premium channels, and — of course — streaming services, there are thousands of ways to watch a program, and certainly something for everyone. It wasn’t always like that; and so it’s a bit of delicious irony that one of the highest-rated shows this year was broadcast on CBS, on a Friday night, and was a rerun of a TV sit-com from 1956. It was the “I Love Lucy” classic Christmas episode, colorized and paired with another retro episode. It was quite amazing to realize that all of the modern macabre movies, sophisticated spy shows, sexy “dramedies,” and no-holds-barred comedies were trounced by a Christmas show starring the late Lucille Ball and Desi Arnaz. It’s surprising, but not really … 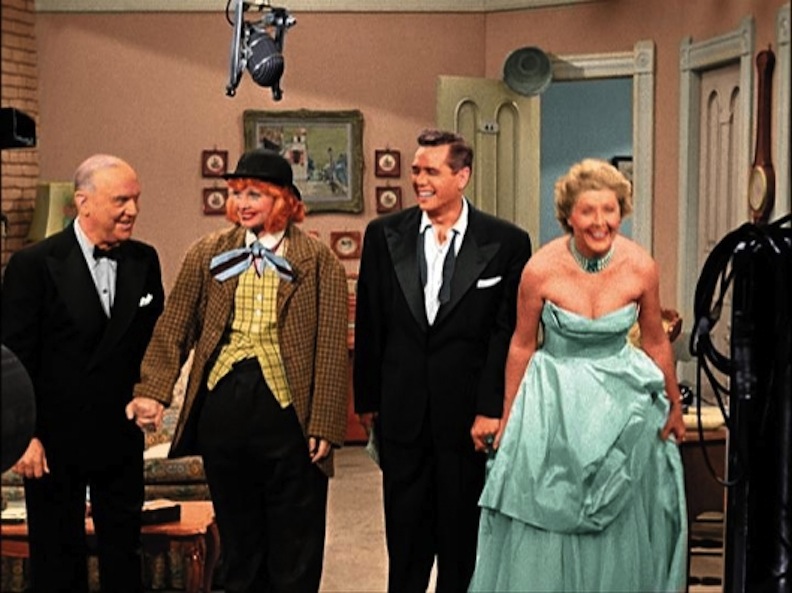 “I Love Lucy” cast taking their bows: the characters of Fred, Lucy, Ricky, and Ethel are comedic legends. (Courtesy of CBS Archives/DesiLu)

One of the reasons why Lucy (Ball), Ricky (Arnaz), Fred (William Frawley), and Ethel (Vivian Vance) held sway over their contemporary competitors is that the show is not macabre, is not sophisticated, and only has a no-holds-barred attitude when it comes to slapstick and making Lucy into an adorable pest (a redheaded menace, if you will). The “I Love Lucy” classic Christmas episode embodies everything that has made Lucille Ball and her co-stars into an enduring emblem of the 1950s. It was filled with the “best of” routines from the show’s prior years as the characters sat around and reminisced about all of the ups and downs they had shared. 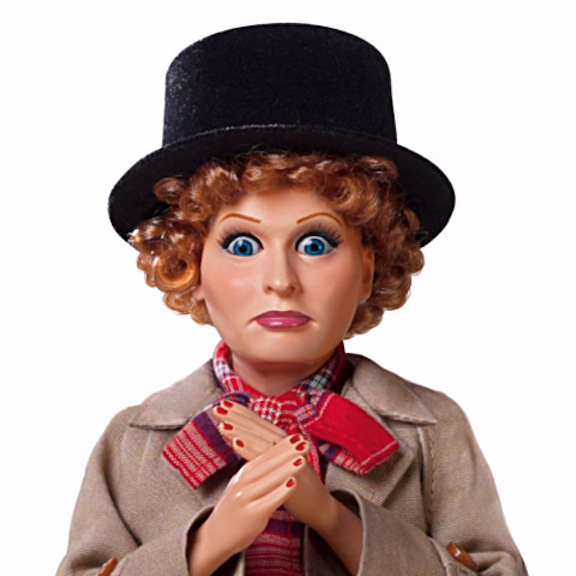 Most people never dress up like Harpo Marx and then do an intricate mirror pantomime! Lucy did, however! Ashton-Drake’s talking fashion doll version captures the encounter.

Naturally, the quartet of Lucy, Ricky, Fred, and Ethel have more frantic moments to recall than most people. The friends chatted about the hysterical trip to the hospital on the day “expecting” Lucy was set to give birth. In those early days of TV, the First Golden Age, the word “pregnant” was considered too naughty, too adult, to speak over the airwaves. As a result, Lucy was termed “expectant,” “expecting,” “with child,” “having a baby,” and even the French word “enceinte.” I think that’s why the “I Love Lucy” classic Christmas episode garnered such high ratings. In a televised world where we are saturated with reality shows — or as “real” as a staged and produced program can get — we all want that escapism of four pals from different backgrounds who put all of that aside to be there and to support one another. 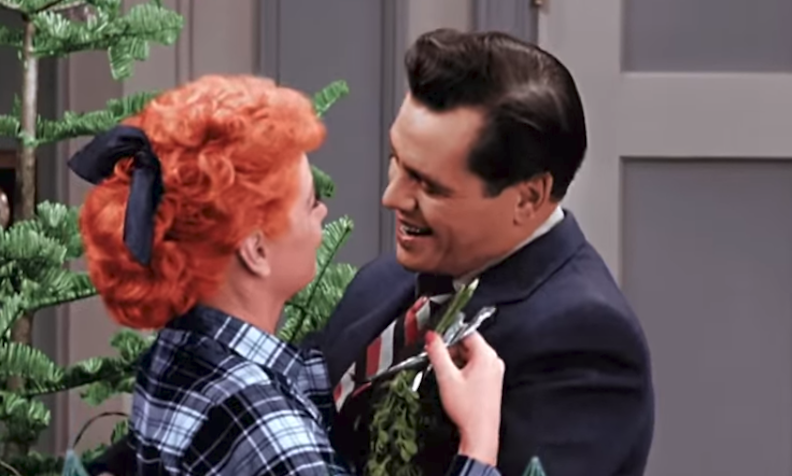 In brighter than living color! The “I Love Lucy” classic Christmas episode showcased the Ricardos in their TechniColor splendor. (Courtesy CBS Archives/DesiLu)

In the series (and in real life, too), Lucy hails from Jamestown, New York, and Ricky from Havana, Cuba. The fictional Ethel Mertz lists Albuquerque, New Mexico, as her hometown; and curmudgeon husband Fred hails from either Steubenville, Ohio, or Indiana, depending upon which season his birthplace is alluded to. (The writers seemed to have had amnesia about that tiny natal detail.) Even though they all come from different origins, the four end up living together in a New York City brownstone that the Mertzes shrewdly purchased after retiring from vaudeville. A scatterbrained housewife, a suave Cuban bandleader, a no-nonsense landlady, and a miserly landlord — what could they truly have in common? 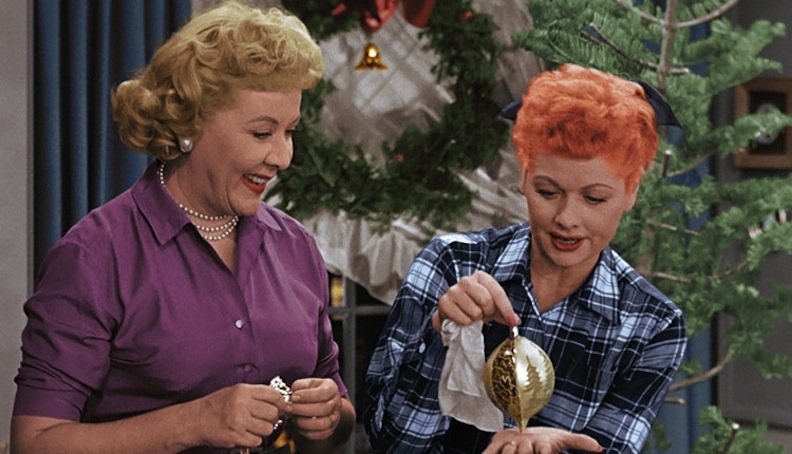 The original girls, aka the OG, of the “I Love Lucy” classic Christmas episode: Ethel Mertz and Lucy Ricardo (Courtesy CBS Archive/DesiLu)

The “I Love Lucy” classic Christmas episode shows that they are as aligned and are as close-knit as those other famous groups of Manhattan residents: the “Friends” and the “Seinfeld” casts. Before there was Monica and Rachel, there was Lucy and Ethel; prior to Jerry and George, we had Ricky and Fred. The classic Christmas episode plays up how this foursome has weathered the good and the bad, the ridiculous and the sublime. 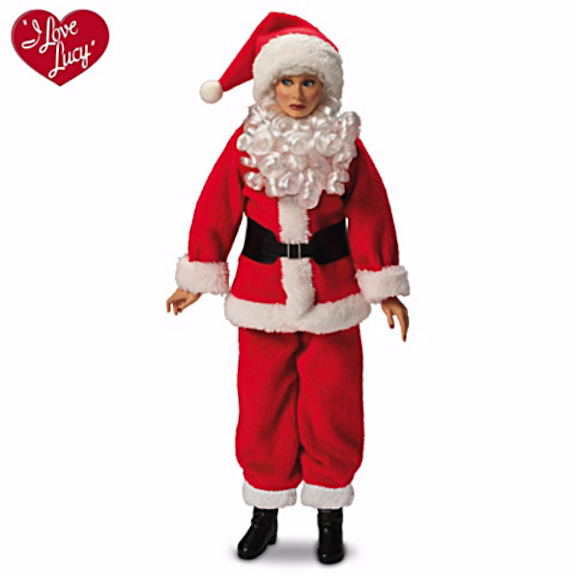 The “I Love Lucy” classic Christmas episode was a hit in 1956, and now 62 years later, too. Ashton-Drake has a jolly, 14-inch, posable, talking fashion doll based on the special.

Additionally, the “I Love Lucy” classic Christmas episode dared to be sentimental and a whole bunch of corny. It didn’t come up with some kind of logical explanation at the show’s conclusion as to how a Santa lookalike ended up in the Ricardos’ apartment. No, ma’am. The show valiantly lets the viewers — and the characters, too — accept the fact that the real Santa paid an unexpected visit to the New York rental for little Ricky’s special night. 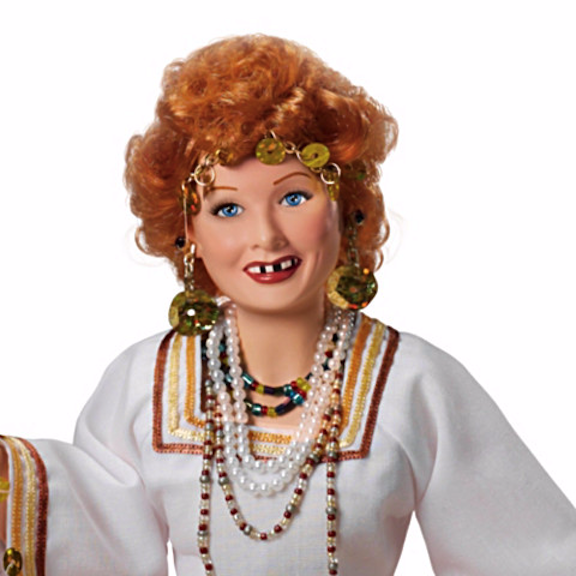 Lucille Ball never minded hiding her fashion-model good looks. This Ashton-Drake doll version celebrates Lucy’s turn as the Queen of the Gypsies in “The Operetta” episode.

Of course, the show always trafficked in incredulous moments (Lucy just had to put on a brunette wig or a pair of glasses and Ricky wouldn’t recognize her), but the Santa inclusion is truly whimsical. “I Love Lucy” was a show that was targeted to an adult audience. Yes, kids watched it — in fact, nearly everyone in America watched it — but the writers and the actors were willing to let Lucy, Ricky, Fred, and Ethel witness a drop-in by old St. Nick. And why not? Pretty much everyone who owned a TV set in 1956 was dropping into the Mertzes’ brownstone that evening. 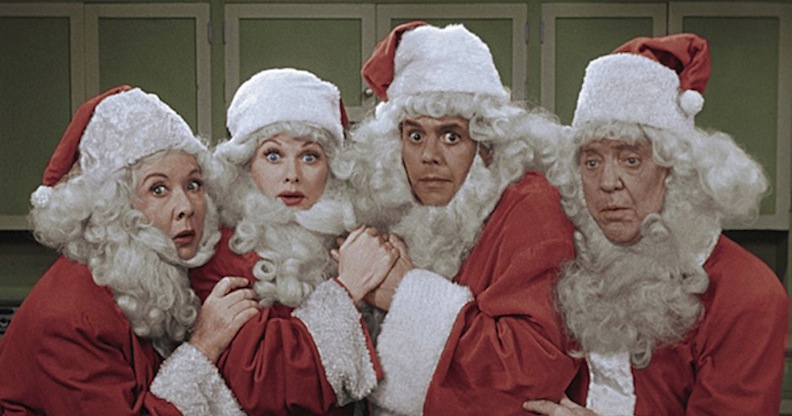 The cast of the “I Love Lucy” classic Christmas episode realize that they just met the real Santa Claus! (Courtesy CBS Archive/DesiLu)

Back in 1956, the show had great ratings. Today, in 2018, it dominated every other network and cable option. The “I Love Lucy” classic Christmas episode has become CBS’s special holiday offering. With the characters colorized and made more “relatable” to modern viewers — lots of millennials and younger folks won’t watch black-and-white — the show could possibly run and run and run for the next 62 Christmases in a row. That’s also one of the reasons why this particular Lucy moment was made into a doll by Ashton-Drake. The good feeling that Lucy imparts to her fans when she realizes that her run-in with Santa is real is an act of heartwarming pantomime at its best. Lucy is genuinely childlike and appealing when she counts off how many Santas are in her kitchen, and she concludes that one of them is not part of her foursome. It’s a moving, nostalgic moment. 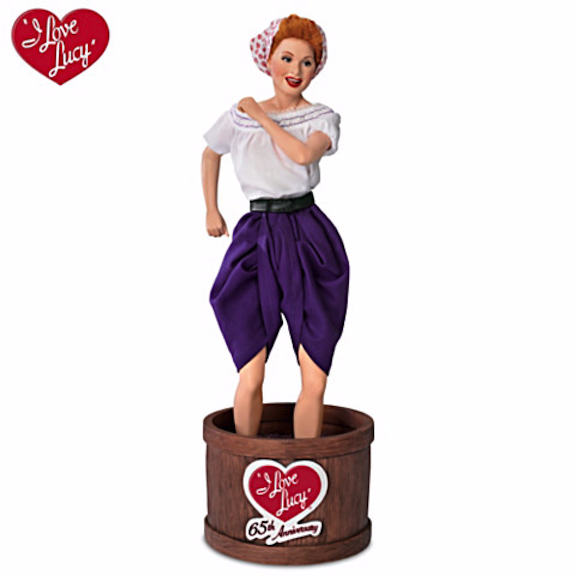 Only Lucy could turn a grape-stomping job into a classic moment of universal hilarity! Ashton-Drake immortalized it with their portrait doll!

“I Love Lucy” has persevered for all these decades because it reflects escapades that the average person would never encounter, but the rollicking scripts accomplished it in the guise of four very different neighbors who gradually grew to become best friends. Ashton-Drake has enshrined many of these comedic gems as portrait musical dolls and fashion dolls. The Queen of Comedy lives on!