Late on Sunday nights—after the kids are sound asleep and the hubby has retreated to the bedroom to read Popular Science magazine—I settle down on the couch with my loyal cat, Annie, and my trusted remote control in hand. I DVR “Desperate Housewives” faithfully, and I love being able to sit and unwind for 45 minutes as I watch all the over-the-top goings-on, gloriously commercial free! Usually, it’s a source of amusement and occasional nail-biting cliffhangers. This week, it was an affront for all collectors who have ever held a doll in their arms!

In case you’ve never watched the primetime soap (though the producers claim it’s a parody of a soap), it centers on the loves and losses of four central housewives, and then a visiting neighborhood minx or a villain pops into the picture for a year or two as well.

The main quartet of sensational-looking hausfraus are Susan (Teri Hatcher), Lynette (Felicity Huffman), Bree (Marcia Cross), and Gaby (Eva Longoria). Over time—the show has been running for seven seasons now—Gaby has become my favorite character. She has a mammoth ego, and no moral compass whatsoever. She is materialistic, jealous, petty, hypocritical, and calculating. You’d never want her as a pal in real life, but on TV she is a welcome shot of pure, uncalculated energy and entertainment.

However, the petite spitfire (it always makes me chuckle that she is supposed to be a former runway model, when the fashion industry considers 5’ 8” to be the minimum height allowable) has had a bad run of luck lately. Having discovered that the baby she birthed seven years ago was switched at the hospital and she’s been raising another woman’s child, Gaby has become understandably perturbed.

Being on a television series not known for its restraint, she’s allowed this discovery to turn her into a completely loopy nutcase. Evidence that she’s become more unhinged than a farmhouse’s screen door flapping in a Kansas twister? Well, she’s tracked down who her birth daughter is, learned that the girl, now called Grace, is being raised by illegal immigrants, and plotted to have them picked up by immigration so she could be reunited with her “real” child! Of course, she sees the errors of her way at the last possible minute, and masterminds the escape of Grace and her parents. They are now fugitives from the federal government. (Thanks a lot, Gaby!)

Left with a hole in her heart, and ignoring the two daughters she has at home, Gaby is a woman on the verge of a nervous breakdown. And this is where the producers show their misunderstanding of the doll experience. Gaby, in a truly desperate move to hang on to the biological daughter she can’t have, buys . . . a . . . doll!

Back in the 1960s, when spoiled former fashion models got a case of the blues or the red meanies (like Audrey Hepburn in “Breakfast at Tiffany’s”), they’d reach for a handful of prescription pick-me-uppers. Famously nicknamed “dolls” by Jackie Susann in her scandalous novel, “Valley of the Dolls,” the barbiturates and painkillers were a necessity for getting to bed and for getting up in the morning.

In the brave new world of 2011, the “doll” that is comforting the growing-ever-more-screwy Gaby is a real doll. When her frienemy Bree (none of these women are purely friends or enemies) discovers Gaby’s secret surrogate, she is horrified. Mind you, these are women who

have cheated on their husbands, committed manslaughter, been facedown in the gutter drunk, covered up crimes, and have formed lynch mobs, BUT the notion of a woman with a dull is beyond the pale to them! That made me roar with laughter, and then it made me roar with anger.

The mature doll collector has been given a bad rap in popular culture. It’s one of the last bastions of unadulterated bigotry. Way back in “Murphy Brown,” the kookiness of Corky Sherwood (Faith Ford) was further driven home by having Corky shown as a collector of Madame Alexander’s First Lady dolls. (“Pat Nixon is my favorite,” she candidly opined.) On “Will & Grace,” the politically correct roomies decide to become friendlier toward other residents in their high-rise. They meet someone who seems fairly decent, until they discover he’s a doll and bear collector—a double whammy. Same with “Sex and the City,” when Carrie’s hapless gay pal, Stanford, finds a potential lover. However, he has to bid a hasty adieu when the prospective paramour is revealed to be a Madame Alexander fanatic.

Oh, it’s been a hard road for us adult collectors. We’ve been portrayed as psychos, sociopaths, misfits, and emotionally damaged goods. In my humble opinion, one of the most touching moments this entire year on “Desperate Housewives” was the exchange between Miss Charlotte, the owner of the shop where the doll was purchased, and Gaby. Gaby has returned with the doll to the “Academy”—that’s what the store is called—because the poor plaything was mauled by her daughters, who beat it up pretty bad with rough horseplay. She confesses that she wants the doll for herself, and is there something wrong with her?

Gaby is confused, and asks tentatively, “Did the doll tell you that?” And then Miss Charlotte speaks pure pearls of wisdom. I’ll paraphrase as best I can here: “Dolls can’t talk, Gaby, but they tell their stories to you nevertheless. Dolls are great friends, because they don’t change, and they never leave you. What is your doll’s story, Gaby?”

And as the camera pans back to Wisteria Lane, and we see Gaby returning to her oversize home and oversize life, stepping out of her car with an oversize box, her voiceover tells us: 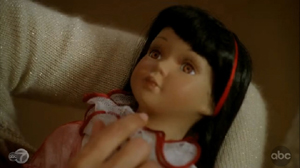 “My doll is named Princess Valerie. And she was born a princess. But she didn’t always know she was one. She was switched at birth. And now she has returned to the castle, and her mommy is never going to let her go away again. She will remain a princess forever now.”

As that last line is delivered, we see Gaby hiding the doll in the box in her closet, on a high shelf away from prying little girl hands, and she shuts off the closet’s light.

How sad that Gaby can’t display her doll—that she can’t give it a place of honor on her dresser or on her bed. If that would seem too presumptuous, then why not let it sit on a rocker in her changing room, or perch upon a shelf in the family room. It’s awful that Gaby’s inappropriate obsession with her firstborn has been transferred to this secreting away of a doll likeness.

It makes all of us doll collectors seem just one Skipper and Skooter away from commitment. I’ve watched the ladies of Wisteria Lane behave very unladylike. I’ve watched them beg, borrow, and steal—before the credits have even rolled. I never thought the one unmentionable and tucked-away action would be doll collecting!

What do you think? I’d love to hear your take on the forbidden nature of being an adult collector in the mind-set of the media!

Gaby has committed lots of questionable acts on “Desperate Housewife,” but none are as secretive as her love of “Princess Valerie,” her brand-new doll. [Middle]

Bearing an uncanny likeness to a daughter she can’t raise, “Princess Valerie” marks Gaby’s fall from grace. Is this the nutty action that will get her tossed off Wisteria Lane? [Bottom]