Dollcasters: Is Network TV just a Few Segments Away from a Team of Vinyl Broadcasters?

The other week, I was watching “The O’Reilly Factor,” and Bill O’Reilly was in rare form. I can always tell when the cable pundit is going to be on fire because he begins his program with an extra-large, extra-broad finger point and proclamation of “Caution! You’re about to enter the No Spin Zone.” On this particular night’s episode, he was practically levitating out of his chair as he greeted viewers and warned them to buckle their armchair seatbelts.

The show was its usual bombastic parade of talking heads, but O’Reilly was unusually giddy during his “Culture Warrior” segment. He and his two societal critics got their knives out and nattered on about a provocative new “Barbie”—a doll, according to their standards, that was garbed in a too-skimpy, too-revealing black dress.

During the roundtable session, the Barbie doll was taken to task for being too sexy, for being an unrealistic role model for children and young girls and for setting a bad example by encouraging eating disorders. (Yes, the doll was scolded for not eating three square meals a day.) O’Reilly, who always declares he’s looking out for the folks, cautioned parents to think twice before buying one of these vinyl voluptuaries for the little kids at home.

What I found fascinating about the whole exchange is that the FOX Network is known for its rather glamorous, highly made-up news anchors. The majority of their news presenters are young blond women in their late twenties to early thirties who stand just a peroxided hair under 6 feet tall. There’s a joke that the station is called FOX because it exclusively hires foxes.

The women who were surrounding O’Reilly that night were typical of the station’s stable: perky, pretty and passionate. I always find it intriguing that the network’s “anchorettes” don’t wear lipstick: They wear shiny lip gloss.

Despite their own rather cocktail party-ish demeanor, the debaters were scandalized by how inappropriate the new Barbie was in her skin-showing togs.

That got me to thinking how Mattel should team with FOX or CNN or MSNBC and create a line of media-savvy Barbies. Incidentally, the new “I Can Be” Barbie, slated for release in September, is a TV news anchor. There was actually a global vote among fans for what Barbie’s latest occupation should be, and television journalist won hands-down among the young girls who weighed in. (Computer engineer won the overall popular vote.)

It’s great that Barbie is going to be portraying a television anchor, but Mattel or some other manufacturer should really work hand-in-hand with a news agency and concoct a group of dolls that can really deliver the news.
Clad in pastel power suits, coiffed and combed, the dolls can have their strings pulled and can give us the latest Dow readings, or chirpily announce the night’s winning lottery numbers. Modern technology has probably allowed for chips to be put into the dolls, so they can emote longer stories in accent-free regional-less newscaster dialect.

Don’t think I’m just rambling and foolishly free-associating. Taiwan has introduced a set of animated CGI figures that act out their country’s tawdriest nightly leads (so far, the Tiger Woods scandal and the Al Gore masseuse allegations have gotten the full robotic treatment).

Not to be outdone, Italy, France, Canada, and several other nations have found success with the “Naked Newshour” franchise. (I kid you not.) It is exactly what the name suggests, so why not a news program staffed by plastic personalities?

News and puppetry are not strangers to one another. I recall how a rumor used to circulate that Ted Koppel was the childhood model for Howdy Doody, which was, unfortunately, not true. And there was a British weekly series, “Spitting Image,” that bitingly lampooned politicians, newsmakers and headline grabbers. The keen satire was done by a panel of edgy and adult-only puppets.

So, my dollcasting dream is not so far-fetched. I think the time will come when our news will be delivered by attractive and articulated dolls. I think the Katie Courics, Diane Sawyers and Megyn Kellys of the world are just opening the door for their eventual smaller and snazzier counterparts.

Families will happily gather to watch the news together; anchors will never grow old and will never have to worry about being put out to pasture. The Eyewitness News teams will always be an eyeful and will always joyfully give us our evening earful.

Until then, I’ll have to turn on Bill O’Reilly and his panel of rotating lovelies to see the next-best thing to Barbie Broadcasting.

Whether they’re discussing hemlines that are too high or necklines that are too low, his guest commentators are the embodiments of living, breathing dolls. And every so often, the news cycle stops spinning and an 11½-inch fashion doll can become the hot-button topic of the day.

What do you think about dolls doing the news? And, conversely, newscasters looking so much like dolls? I’d love to hear from you, and remember: name and e-mail if you wish to opine.

Photo Captions
The I Can Be “Barbie” (above) matches her prowess with the TelePrompter. The September 2010 release has Barbie as a TV news anchor. It seems a perfect fit: She’ll be following in the pumps of FOX reporter Megyn Kelly (above), for instance.

An uproar over Barbie’s latest incarnation in her little black dress landed smack in the middle of a cable-TV news debate. The doll’s style and societal effect were called into serious question. 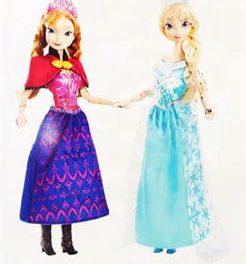