The other evening I was at a Weis grocery store with my sister. It was pretty late, but I had a deep and urgent hankering for a chocolate truffle brownie cake. Despite the hands on the clock, my feet and my tummy demanded that the craving be met. So, off we went to the market.

While on line, I noticed how the store was nearly vacant, and our cashier was talking freely to a friend, who was a fellow store worker on a break. They were both ponytailed young girls, and they were engaging in a running commentary about everything.

In addition to my chocolate cake purchase, I had also grabbed a box of Toy Story 3 Limited-Edition Cereal for my children. (Yes, limited-edition status attributed to breakfast goodies! I guess they’re MIB: munchies in box.) When the girl on break saw my Toy Story purchase, she immediately launched into how excited she was to see this new flick. “I can’t wait to see ‘Ken’ meeting ‘Barbie’ for the first time,” she asserted. “That looks so funny in the trailer.”

When I mentioned the movie’s rather sad plotline (Andy going off to college and having to decide whether to throw away or stow away his toys), she adamantly declared, “I’m going to college in September, and I’m not getting rid of any of my toys. I have all of my Barbies, and I still love them. Sometimes I even play with them.”

I immediately warmed up to the chatterbox, and seeing a likeminded soul, I said, “So you’re a doll collector?”

Her eyes grew wide, her complexion paled—it was like the vampire, Edward, from Twilight had just loomed behind me. “No, I’m not a doll collector,” she sputtered. “Not at all.” And then she hurriedly went back to her lane to wait on a batch of invisible customers. 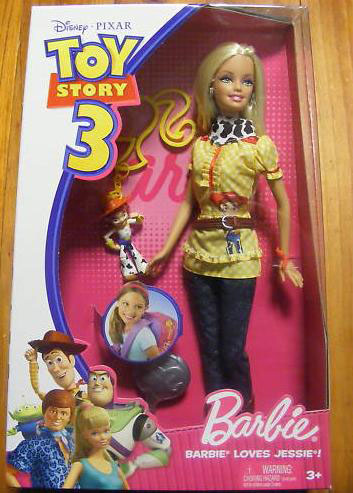 When I went home with my purchases, I began to wonder what scared that girl off. All I could think was the term “doll collector” conjured up some sort of un-cool social misfit. In Toy Story 2, the villain of the piece is a toy collector who buys and trades classic toys so that they can spend the remainder of their lives inside boxes and behind glass cases. He is a heartless, joyless mercenary.

As doll collectors, we know that’s not true. We’re not soulless hoarders who just want to acquire items for monetary or selfish gain. We love our dolls.

I wish I could have engaged the market worker in a longer conversation. Her face lit up when she was talking about her Barbies, which she still enjoyed handling and holding, even as she prepared to begin her adult life.

If only I could have told her that being a “doll collector” is not some strange, over-the-top behavior. It’s nothing to be ashamed about and to furtively admit. Rather, it is a natural extension of one’s better, earlier self. It’s a way to keep alive the inner child who can see a world of endless possibilities in a piece of painted plastic.

At times like this, I’d love to form a self-help group for embarrassed doll collectors. A simple six-step program to admit to one’s self and to the world that you are a doll devotee and you’re proud to announce it. We would be the Friends of Barbie R. (For those of us in the know, Barbie Millicent Roberts is the Mattel superstar’s full name.)

Perhaps one day, the little Weis checkout girl will admit to being a doll collector. Until then, she can silently and secretly play with her dolls, but a world of empathy is there for the taking . . .  if she takes that first step.

Photo Captions
A late-night conversation about Toy Story 3 (top) opened the door to wondering when and how do we admit to being a doll collector?