In my 25 years of doll collecting, I continue to be inspired and fascinated by the way other collectors focus on different areas and sub areas when building their doll collections. Take, for instance, the Barbie collector whose interest is only Skipper or Midge, or the Shirley Temple lover who will only collect the exceedingly rare compo versions of the dolls. As I delved into my research for our Miss America doll, I was delighted to discover a new (for me) collection, full of nuance and the “thrill of the chase”–the Miss America doll.

The Miss America Organization was born in 1921 as a public relations stunt to keep tourists at the New Jersey shore after Labor Day. The first Miss America was Margaret Gorman, and although winning the title did little to change her life, it did accomplish the goals of the Atlantic City businessmen–the crowds stayed in Atlantic City.

Off to a rather rocky start, the Pageant slowly began to develop into the respectable affair it is today under the watchful eye of Lenora Slaughter, the Pageant director who was brought on board in the late 1930s. Slaughter sought to build the positive portions of the Pageant and downplay the negative. She even changed the name of the “bathing suit” competition to “swim suit.” Under her guidance, it became an honor to be in the Pageant and the organization attracted young women who had interests other than show business.  In the mid 1940s, the organization raised money to implement the scholarship program that remains in place today. Today’s Miss America is a bright, aware and socially conscious young woman who uses her celebrity to make a difference in the world.

In 1955, Lee Meriwether became the first Miss America to be crowned on live television–and television brought the Pageant into the homes of millions, creating its place in American history, an aspiration for girls of every age. Now mothers and daughters could delight in the glamour and suspense of the competition “live” in their own living rooms. It was television, I suspect, that created a desire for a Miss America doll–and of course, the toy companies were happy to oblige.

After being approached by the Miss American Organization to produce a doll, I became interested in the number and types of dolls produced under license from the organization over the past 80-plus years. The Miss America Organization has a rich history and so do the dolls that were to represent Miss America. The more I studied, the more I was surprised by the extensive and fine legacy!

Following the doll trends of the day, the Miss America dolls came in all shapes and sizes. One of the earliest was a beautiful cloth doll made by Georgene. Made in the ’20s or ’30s, it is quite difficult to find today in good shape.

By the late 1950s and early 1960s, the Miss America Pageant had become a source of almost Cinderella-like dreams, and this was reflected perfectly in the 1960 Pageant. The beautiful young contestants wore princess-like gowns, were escorted by handsome young men in uniform–with a carriage pulled by horses in the background! In the late ’50s, the Sayco Doll Corporation produced “Miss America, Pageant Doll” in both a 10½-inch toddler type and an 18½-inch adult figure doll. The toddler type doll had an extensive wardrobe of almost 50 different styles. The little girl doll had outfits for every occasion–from play clothes to ball gowns, and even bridal gowns. The larger, more adult doll resembled the popular fashion dolls of the time, such as Ideal’s Revlon doll, and came in a number of Pageant-related costumes.

In 1972, Mattel introduced “Walk Lively Miss America.” The doll was made from the popular “Steffie” head mold, the very popular Barbie body and a walking mechanism (perfect for the runway). The doll had brown hair and blue eyes. That same year, the Kellogg Company produced a similar doll as a promotion; a child could buy it with two Corn Flakes box tops and three dollars. Quick Curl Miss America was introduced in 1973 in the same brown hair shade and as a blonde doll in 1974. The Mattel Miss America doll was produced through 1976. 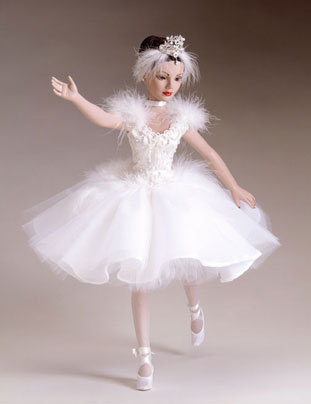 For the Miss America Organization’s 70th Anniversary in 1991, the license to produce the doll was awarded to Kenner. The Kenner line had a full range of dolls dressed both in talent show costumes and of course, evening gowns. The dolls reflected the changing face of the Pageant itself, with multi racial faces and skin tones. However, as nicely done as its dolls were, the company seemed to have a real “uphill battle.” Competing against the reigning fashion doll, Barbie, the Kenner dolls did not stay on the toy shelves for long.

In 1993, doll artist Patricia Rose created a portrait of then Miss America, Leanza Cornett. The Cornett doll was the first doll portrait of a reigning Miss America. Made as a porcelain doll, it was probably meant to be more of a collectible than a play doll.

Leave it to Marie Osmond to come up with a totally new idea to represent the Pageant winners. Produced in 2001 under Marie’s direction for Knickerbocker, the doll is a porcelain baby dressed as Miss America and accessorized with the Miss America crown and a dark blue velvet robe. A sweetly unique interpretation of Miss America!

Last year, I developed my own version of Miss America. My doll was inspired by the look of the “Cinderella” contestants of the mid-1950s. Dressed in a white tulle gown with the signature crown and scepter, along with her royal red cape, she looks every bit the essence of American royalty. Outfits for every Pageant occasion were produced for the 18-inch, all-vinyl doll.
The Miss America Organization asked me if I would use my fashion back­ground to design a gown for Katie Harmon for her final walk on the runway as Miss America. Of course I was delighted to do so, and as a tribute to Katie (a person I admire very much), I produced a doll wearing a dress replicating the one I had designed for Katie. The dress was a pale blue/grey chiffon gown entirely covered in crystal beads. Katie was quite the model for the gown and it was a thrill to see the dress at the Pageant.

I am proud to be allowed to continue to contribute to the Pageant’s rich doll history as well as the Miss American tradition of honoring women of accomplishment. This year, Tonner Doll Company will produce a totally new doll based on Miss America. She is a 16-inch fashion doll who can share clothes with our Tyler Wentworth fashion doll and I certainly hope she will be well received. As much fun as I have had designing the new Miss America, I think I’ve had just as much fun building my new collection– The Miss America Doll collection! 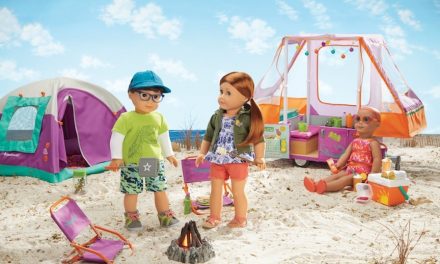 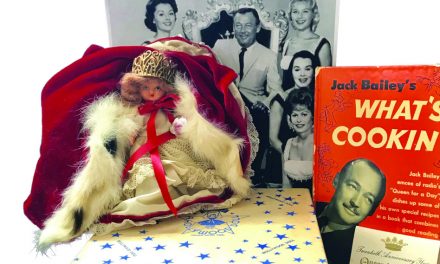 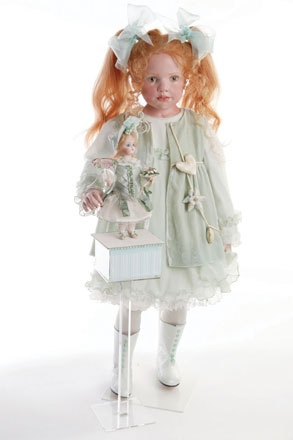