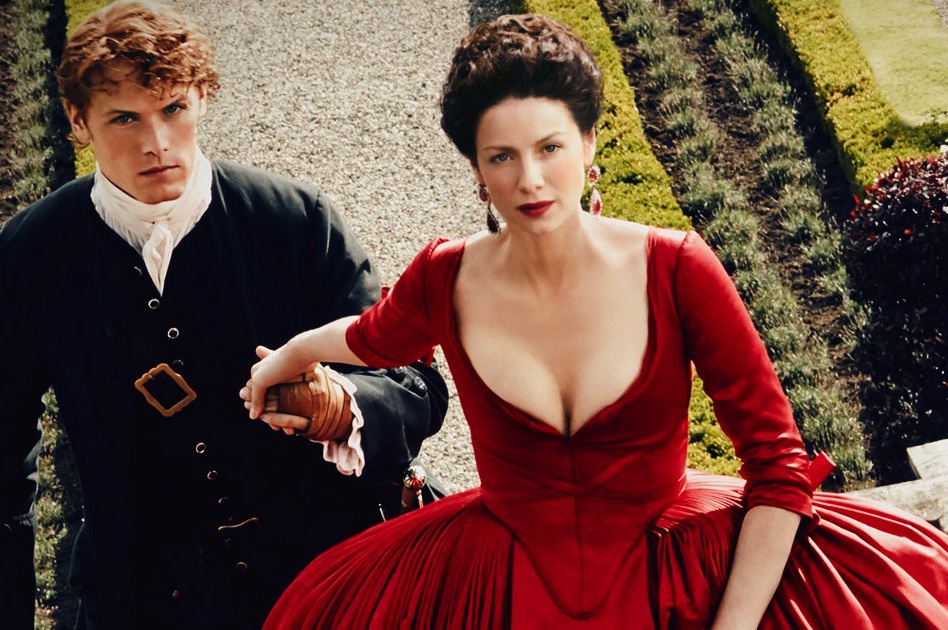 Jamie escorts Claire in the scandalous red dress as they try to change history.

Robert Tonner’s dolls are synonymous with fantastical realism or realistic fantasy. Now, on first glance, that appraisal seems like an oxymoron. How can something be both real and fantastical? If you’re a fan of Tonner’s, you definitely know how. His dolls have always embodied lifelike silhouettes, natural complexions, and real-life attitudes. Yes, granted, his dolls represent the best-looking among us (you’re not going to see a salute to a one-toothed, grizzled dowager), but even with their high beauty standards, they are not impossible beauty standards.

Since many of his creations fall under the category of portrait dolls, these are testaments to actual people — the actress who plays Wonder Woman, for example, or the actor who slips into his tights to become Superman. These godlike good-looking folks really do walk amongst us. (Or rush past us, surrounded by bodyguards and high-paid security officers.) 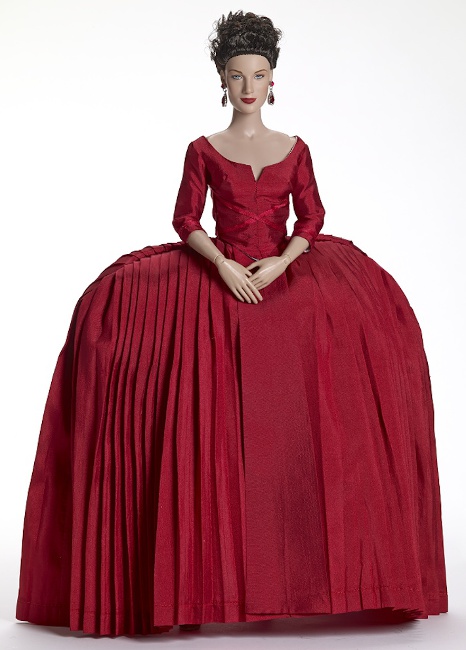 Limited to 300, Claire Fraser poses in the iconic red dress from Tonner Dolls.

I just received a note from Tonner about his latest foray into that realistic fantasy world. His salute to the character of Claire from Starz TV’s “Outlander” show is a brilliant blending of fantasy and reality. Based on the dress that appeared in the pivotal Season 2 episode, the costume, in turn, was based upon the garb that the book’s author had dreamed up in her text. This new Claire doll pays homage to an author’s fantasy made real by a talented theatrical costume designer.

When costume designer Terry Dresbach was asked about her visions for Season 2, where the action moved from the Hibernian highlands to the salons of Paris’s high society, she had much to share with inquiring entertainment journalists and fashion reporters. 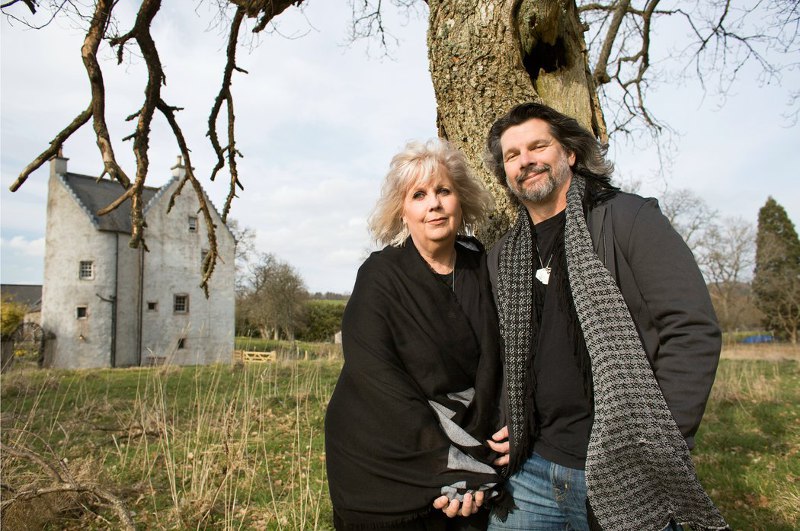 “We made 10,000 garments for Season 2. Not only did we tackle those kinds of numbers, but those garments had to be heavily, heavily embellished. There’s lace, there’s embroidery . . . It was a very complicated process,” she revealed to US magazine.

Looking at the scripts for “Outlander,” and responding to the show’s voracious and vocal fan base, Dresbach told US magazine that the viewers (and the novels’ readers) were most excited about the unveiling of the crimson ballgown.

In the novel, author Diana Gabaldon enthuses about the opulent attire. She details its intricate embellishments and accents. For Dresbach and her design team, they knew that sometimes less is more when it comes to small-screen presentations. 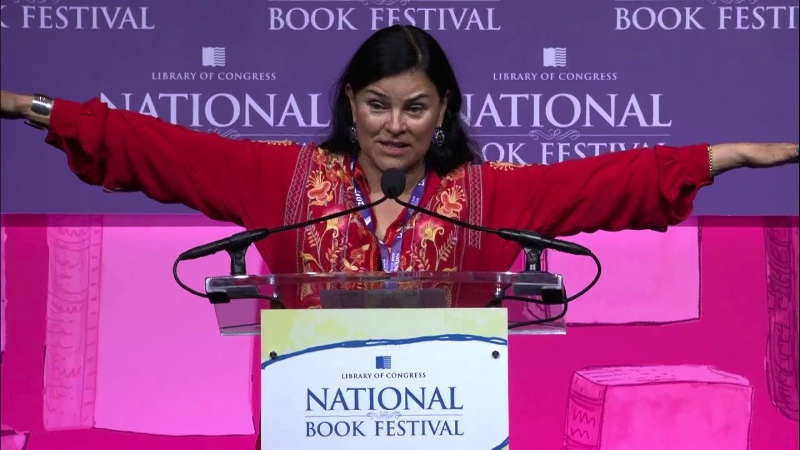 Author Diana Gabaldon in red. Courtesy of Library of Congress

“Cat (actress Caitriona Balfe) and I have always worked hard to maintain the sense of Claire being from the 1940s. So I knew that with the combination of that, and the power of the color of red, I wanted something very simple and elegant,” Dresbach explained.

Robert Tonner is the ideal person to transform a cinematic concoction to a collectible must-have. His Red Dress release is bound to become an iconic part of his company’s legacy. The Claire doll is 16 inches tall, and has 15 points of articulation. Her hair is brunette rooted saran, and it is styled to best showcase her swanlike neck and her “ruby” and “diamond” drop earrings. When I saw this doll for the first time, I was immediately transported back to the past (sort of like Claire, the time-traveling World War II wife). Rather than ending up on a heather-filled hilltop, I flashed back to the star-studded 1996 AmFar Auction and its A-list patron, Demi Moore. 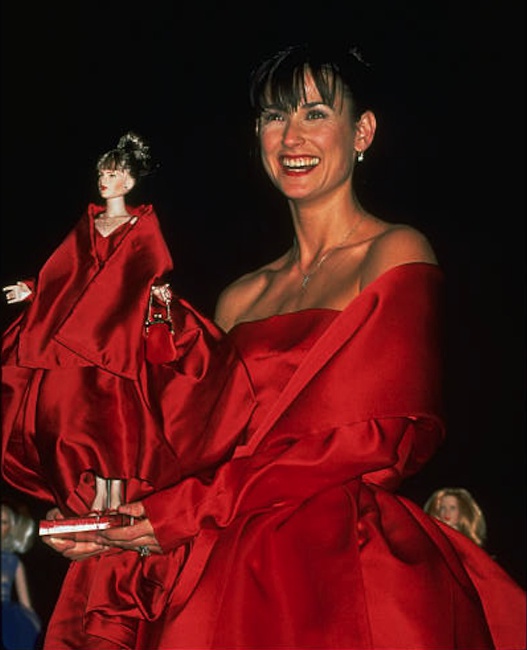 Moore was at the height of her fame, lauded for her movies and her doll collection, and she hosted a silent auction of Tonner dolls clad in world-renowned designer togs. She famously posed with her doll likeness, garbed in a Dolce and Gabbana gown, while she wore the same exact evening wear in real life. Again, the melding of fantasy and reality. (Her then-husband Bruce Willis ended up buying that doll for Moore for $50,000.)

Tonner has quite the eye for crimson beauty, and the Red Dress gown solidifies this hue as among his most powerful palettes. Tonner describes the outfit as: “Made of a deep ruby-red taffeta, the separate bodice of the dress fits like a glove and is trimmed with tiny satin ribbons crisscrossed over the rib cage and cuff of the three-quarter sleeve. Her drop-dead skirt is fashioned of the same taffeta as the bodice and stands out to there! Deep pleats add detail interest and richness to the full skirt.”

The dress is voluminous, and it showcases the width and length that actress Caitriona Balfe had to navigate. The real-life dress was 50 inches wide! That’s 4 feet, 2 inches of fabric that Balfe had to learn to walk and waltz in. 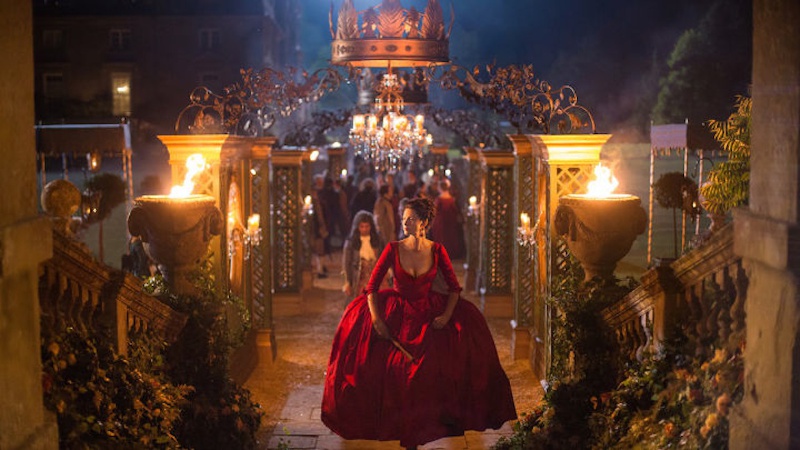 Actress Caitriona Balfe learning to walk and balance in the dress. Courtesy of STARZ TV

“It was interesting trying to maneuver my way through doorways and hallways and cars,” Balfe opined about the opulent costume. “But it was fun, and it was great. Each costume for Season 2 is a work of couture. Sometimes they’re lighter than last season’s, and sometimes they’re not. But they’re much more precious,” she confided while walking the Starz red carpet for the show’s sophomore-year premiere.

In order for collectors to have that same dramatic width and expansive glamour, Tonner has included a tulle cage. “Under all that are nude pantyhose (a nod to the modern) and costume-accurate satin shoes with buckled straps to hold them in place.”

It’s quite fitting that the Red Dress Claire doll has those multi-strapped and buckled shoes. They give her a sexy and sultry leg to stand on. Here is a woman who has had a life of her own, as a battle-tested nurse, during the intensely dangerous WWII years, and she has journeyed back in time to share her love, and her mind, with the Scottish hero Jamie Fraser. 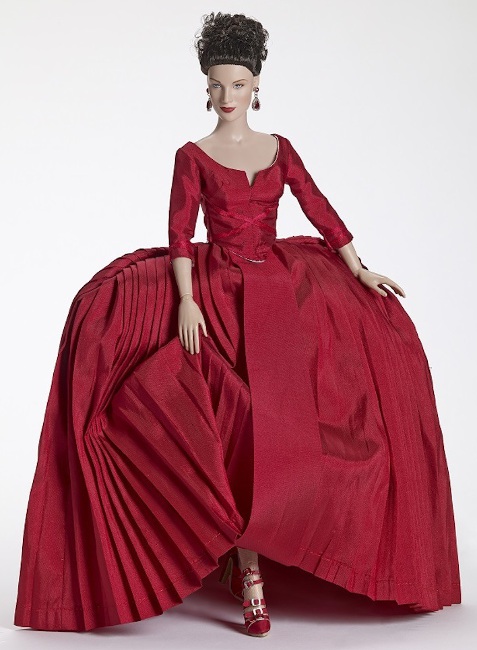 Claire Fraser showing off her leg and shoes in the Red Dress.

The character of Jamie asks Claire if she is mad when he sees her low-cut, ruby-red ensemble. They are about to enter the court of Versailles and are hoping to persuade King Louis XV for assistance in suppressing the Jacobite rising. Claire — a modern woman for the 18th century, and even for the 1940s — is not mad. She’s not crazy or foolish or reckless. No, she’s a renegade and a rebel. 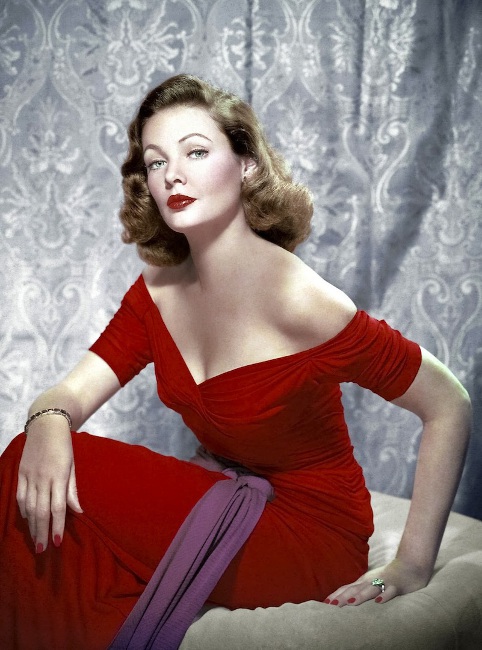 And her choice of red is a call to arms and to battle. She’s not a shrinking violet or a wilting rose. She’s the lady in red, in all her guts and glory. This bold fashion statement has been worn by film’s leading ladies from Bette Davis in “Jezebel” to Gene Tierney in husband Oleg Cassini’s studio, from Marilyn Monroe to Kelly LeBrock. “Outlander” costumer Dresbach has even hinted that the Tierney ensemble influenced her with its 1940s chic sophistication. What a sartorial legacy! (Check out the Tonner website to purchase the doll directly, or to find which retailers will be carrying it in their stores.) 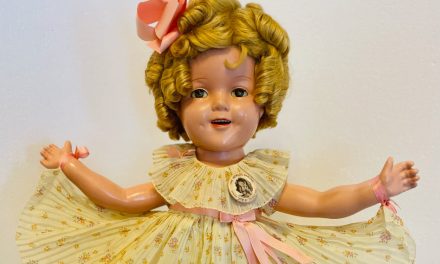