Since working with DOLLS magazine, I’ve noticed a characteristic that many collectors have. When a particular doll or doll theme captures a collector’s attention, a “true” collector wants every possible incarnation of that doll or dolls related to a particular theme. I like dolls. I like them a lot. In fact, I have a fledgling collection. But my collection consists of one doll from here, and one from there. I like all kinds of dolls and so want a taste of everything. I admire the dedication, obsession and passion of single-mindedly pursuing one doll or dolls related to a particular theme … but I figured it was something I would never possess.

But something changed recently. I saw Tonner’s “Jacob Black” Twilight character at the recent Tonner Collectors’ Convention in Lombard, Ill., and I practically salivated. He was exquisite and perfectly represented the masculinity the character possesses.

Then yesterday as I was pouring over the Tonner article for the September issue of DOLLS and saw two upcoming characters—“Aragorn” from The Lord of the Rings and “Prince Dastan” from Prince of Persia: The Sands of Time—it happened. I started wanting every beautiful, masculine movie character doll that comes out—to the point where when I think of acquiring them one by one and placing them about my apartment to perpetually admire and enjoy, I get a happy, anticipatory feeling.

I mean, what could be better than having doll representations that capture leading men in all their male glory? Not to mention they’ll behave nicely on shelves, with none of the complications their living, breathing counterparts seem to possess.

So I have the gene after all. It just was latent, waiting to be triggered by that perfect thing.

The new Prince Dastan by Tonner Doll Co. is based upon the character played by Jake Gyllenhaal in the movie, Prince of Persia: Sands of Time. He cuts an irresistably rakish figure that would behoove my computer desk well I think. 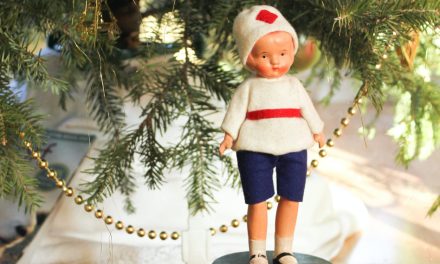