In the Doll World Podcast Brings Dollmakers into Collectors’ Homes 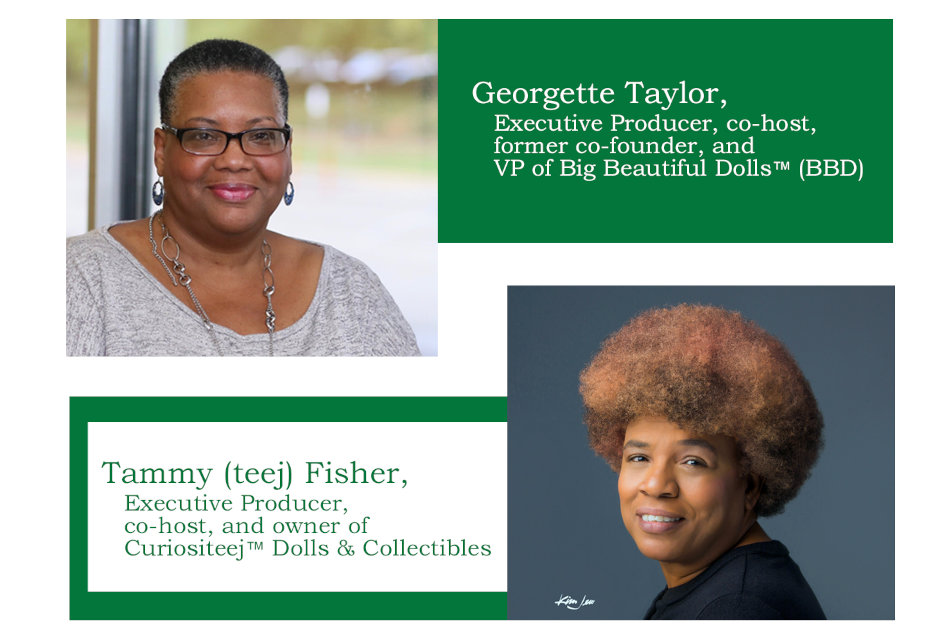 Imagine a world created especially for doll lovers: a world where you can sip tea and eat cookies while listening to Mel Odom tell the story behind Gene Marshall; Jozef Szekeres explain how his dedication to completing his GlamourOz Dolls led to him staying in China at the onset of COVID-19; and clothing designer Bryon Lars share why he created custom dolls for Mattel. This world exists — ever since my co-host, Georgette Taylor, and I created In the Doll World (ITDW), a doll podcast and YouTube channel where your favorite doll people share stories about their personal and doll journeys in a fun and safe environment.

ITDW began as the brainchild of Georgette Taylor, the history-making co-creator of Big Beautiful Dolls (BBD), the first plus-sized fashion-doll line. I, the owner of Curiositeej Dolls and Collectibles, joined Taylor. We launched our first ITDW podcast April 15, 2020. We wanted to give doll lovers fun, interesting stories to listen to during the COVID-19 lockdowns. In less than 18 months, the response to ITDW has surpassed our wildest dreams!

ITDW has been featured in Fashion Doll Quarterly and International Doll Artist magazines. We were interviewed as part of DOLLS magazine’s online Dolls of Excellence Award Show in June. And our podcast has garnered praise from both Feedspot and Goodpods. We are also thrilled with the doll world’s acceptance of us!

Within the first few months of announcing our show, we interviewed Debbie Behan Garrett, one of the foremost Black doll experts; HeXtian, a young doll customizer and YouTube influencer who has over a million subscribers; and Paulette Goodreau, who with her sister Annette created the American ball-jointed doll (BJD) — the first modern BJD to be mass-produced outside Japan. We also celebrated World Doll Day this year by giving all ITDW listeners a free doll and eight outfits.

In a short time, we have interviewed people from every continent except Antarctica and we have spoken to people from over 25 countries. Our listeners have shown their appreciation for our efforts by downloading more than 5,000 of our shows in over 54 countries — more than a quarter of the world’s countries!

ITDW isn’t just about dolls. The people we interview are also artists, business owners, manufacturers, and sellers. As such, we speak about the less than glamourous sides of doll production — the costs, factory difficulties, and unexpected expenses. Niya Dorsey, creator of Brains & Beauty Dolls, told us about forgetting to add “Made in China” to her boxes. Without that one sentence, she couldn’t ship her dolls to the US! She spent thousands of dollars rectifying that simple mistake.

We also discuss difficult topics. Many interviewees have shared the hardships they experienced during the COVID-19 pandemic. Amy Jandrisevits, doll creator and founder of A Doll Like Me, told us about her journey that led to creating a non-profit where she makes and gifts dolls to children with special conditions. Doll artist Frantz Brent-Harris shared how a man became so enraged at one of Frantz’s exhibits that he knocked one of his dolls to the ground and broke her headpiece! The man was angry because Frantz had included a dime-sized Black Lives Matter medallion on the doll.

In January 2021, we announced one of our big goals for the year would be to celebrate diversity in the doll world. Because we were hearing from people around the world that they were having a hard time finding black dolls, we started In The Doll World’s First Annual Celebration of Black Dolls. We kicked off the celebration in February to coincide with Black History Month in the U.S. During the festival, approximately $2,000 in dolls were given away by dollmakers and professionals from the U.S., Canada, U.K., and Australia to collectors around the world. We also celebrated Pride Month in June 2021with a series of interviews with members of the LGBTQ+ community.

Looking ahead, we will continue to support diversity by interviewing people from around the world who are doing interesting things related to dolls. We will also continue to support both large and small doll professionals and to introduce new doll creators. We’ll also continue supporting the doll world by expanding our reach and collaborating with other organizations. Last year, we worked with the Professional Doll Makers Art Guild (PDMAG), and this year, we are supporting a number of doll conventions and are in discussions with multiple groups and companies.

Negotiating Your Doll Collection Within Your Family