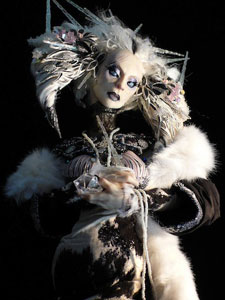 The original Danish name for the Snow Queen is “Sneedronningen.” Virginie Ropars captures the horror and the haughtiness. 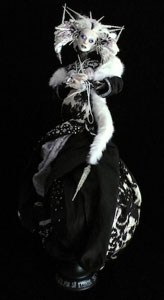 The new Ropars rendition of the Snow Queen is every inch a powerful and polished majesty. 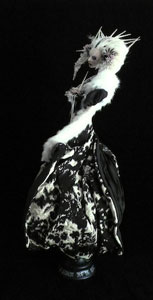 Typically, the Snow Queen is all white or dressed in blue and white. Here, she is garbed in Dior fabric. The black-and-white contrast depicts the snow that covers the struggling life beneath. 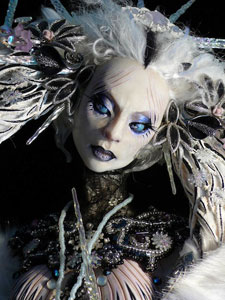 Her face is a mask of icy, cold indifference, or is it? 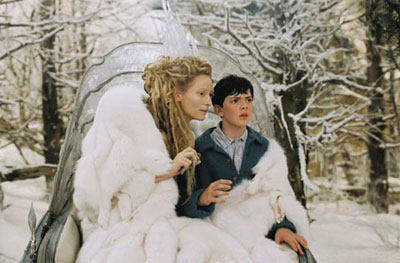 I always think of Tilda Swinton as the White Witch in “The Lion, The Witch, and The Wardrobe.” Her temptation of the character Edmund is akin to how the Snow Queen captures her companion/prey. 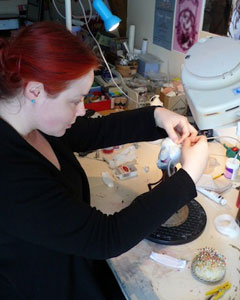 Virginie Ropars is indefatigable when it comes to resurrecting characters that oft reside buried in our nightmares. 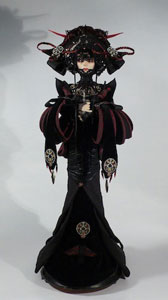 This figure is part of the Acanthophis series, which Virginie started three years ago: “I was searching for a name for one of my work with no particular concept behind it. I was just having fun matching stuff and fabric and ideas. As often, I was just making a kind of dramatic femme fatale.” 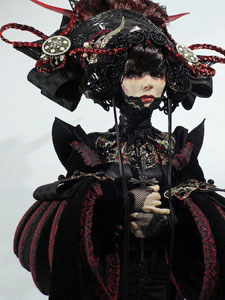 Virginie Ropars likes to make reference to nature and insects in her work: “I often give my pieces names of butterflies, moths, flowers, in Latin mainly. I was looking for some kind of generic name I could use with a number. Then I thought the snakes’ names would be worth the search. ‘Acanthophis’ is the Latin name given to all the snakes of the ‘death adders’ family. That was very appealing to me.” 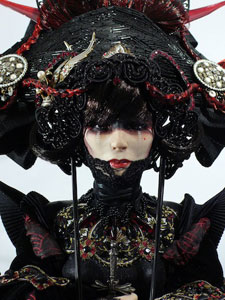 The Acanthophis series is used by Virginie for the most dangerous women in her collection: “To me, they are more like poisonous flowers than women. I am quite obsessed by the idea fabricated by men of the femme fatale. For me, this gave us the most beautiful and obsessive female character in art and literature.” 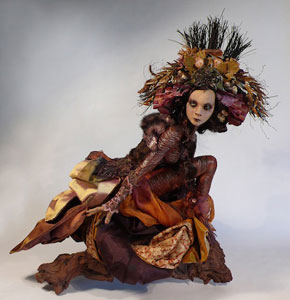 “My ‘Lurking in the Woods’ came out from eerie and misty ideas. There was no clear idea at the beginning,” Virginie shared. “I knew the position I wanted to use and the range of color. I got a mixture of several things in my brain regarding her.” 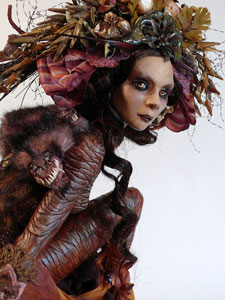 When Virginie made “Lurking in the Woods,” she was thinking about “Harvest Home,” the book by Thomas Tryon: “I was thinking about all the dark pagan fertility cults in general, witches’ Sabbath. It often depends on what I’m reading at a certain moment.” 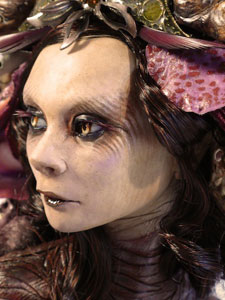 Virginie Ropars came across a 1970 Czech movie, “Valerie and Her Week of Wonders.” She adored “the strange and beautiful atmosphere of the movie and its general colors. This was in my mind when I made ‘Lurking in the Woods.’ The viewer can imagine the rest around this character.”

One of the best parts of blogging and being in the doll world is keeping up correspondence with doll artists around the world. When I was a young girl—probably fourth to maybe even ninth grade—I had a huge array of pen pals. They lived everywhere: America’s Southwest, New England, New Orleans, South Korea, Japan, and Ireland! Yes, I certainly had a busy weekend when I’d sit down and pen letter after letter to these never-seen friends.

Nowadays, I don’t have any “pen pals,” but I do have a nice coterie of folks to whom I send and receive e-mails. It’s a decidedly doll- and bear-oriented bunch, and they are all very talented women (and a few stray men)!

Among these correspondents is Virginie Ropars, who hails from Brittany, a northwest region of France—not a fan club devoted to Britney Spears. I love getting mail from Virginie because she is fluent in English and tolerates my attempts (every now and then) to free-associate in my high-school French. Virginie is one of the most articulate people I know—and her eloquence is in a second language. I, on the other hand, speak and write French like a very bright first-grader. (Or, when I am really inspired, a first-grader poised to skip second grade.)

Recently, we were cyber-chatting about the Snow Queen. I had mentioned in last week’s blog that the Disney version that will be skating down the pike in November 2013. It will be launching a flurry of Mattel dolls and Disney Store replicas. The animated cast of “Frozen,” even though they do have a “good girl gone bad” in their Snow Queen protagonist, looks very wholesome and very Scandinavian.

Always mining myths and legends and subconscious fears and desires, Virginie recently made her own unique interpretation of the Snow Queen villainess. Known for her dolls that can be dark yet divine, ghoulish but glamorous, her newest creation is no exception.

Having stumbled upon a piece of Dior fabric, Virginie spread it out and the black-and-white contrast immediately spoke to her of a “snowy landscape with black bushes or pine trees coming out of melting snow.” Naturally, the idea of snow prompted her to re-imagine the Snow Queen, and to use that Dior material for the doll’s wardrobe.

Since most interpretations of this character show her in white, or white with icy blue, I wondered how Virginie got the courage to go against the flow.

“I loved the idea to use a lot of black for a Snow Queen figure,” Virginie wrote to me. “It’s more interesting to use what is not obvious when you talk about snow. Usually, artists use white and blue only or mainly for Snow Queen representation. To me, she needs more dramatic colors. For me, black is the color of sleeping nature in winter. The Snow Queen personalizes the force of winter, and she is not human. She is fierce, all cold, dying nature, but she is the beauty in all this. With such a character, the imagination can go totally wild; and, after all, she is not human so you can be free to make whatever you want.”

When I envision the Snow Queen, I think about the Tilda Swinton character of the White Witch in “The Lion, The Witch, and The Wardrobe.” She was so frozen in her emotions—so cold in the way she heartlessly pitted one child against his siblings. Her abuse of young Edmund masquerading as concern was chilling to behold.

The Hans Christian Andersen fairy tale of the Snow Queen has that same depiction of emotions that are distorted and fractured. Virginie was drawn to that part of the story and explored it with her research and with her sculpting.
“The original Danish name is ‘Sneedronningen.’ I also tried to find the original Danish version of what she says when she meets the boy Kay. She kisses him, and he feels her kiss as cold as ice. Then the Snow Queen says: ‘Now you will have no more kisses, or else I should kiss you to death!’”

That really is a dramatic warning, and all of its components struck Virginie—so much so, that that sentence is written in Danish on the doll’s wooden base.
“The Snow Queen is completely ‘femme fatale’ and sovereign. She is a queen and she doesn’t need anyone to exist, even if she is trying to keep little Kay with her,” Virginie theorized in her e-mail. “To me, he is nothing more than a whim of a queen.”

Beyond this mesmerizing figure—a study in black and white, changing the queen into a film noir heavy—Virginie’s whole oeuvre is worth exploring. Visit her website at http://vropars.free.fr/ or Google her Facebook page, Virginie Ropars-Official. Her work is brilliant and compelling, disturbing and alluring. It’s all very much like the imperious Snow Queen and her cruel but commanding ways.