This weekend I was lucky enough to attend the Jason Wu Event VI: Iconic in Schaumburg, Ill. This was the sixth annual event put on by Integrity Toys and throughout the years, it has gained the reputation of being the “Cadillac of doll conventions.” After attending one myself, I certainly wouldn’t argue that statement. For breakout events, no extravagance is passed over: from the fine cuisine to the luxe table decor, live music (Chicago Catz), guest of honor (Jason Wu) and breakout dolls, the company brings nothing but the best to the table for their collectors.

In addition to the first ever Friday-night haute couture-themed dinner/dance party, this year also marked the first Design-a-Doll-Studio, where collectors paid $30 to pick from a menagerie of Dynamite Girls bodies, heads and clothing separates to create their own one-of-a-kind doll. Attendees loved the studio, and by the end of the event, the selections were nearly gone.

Of course the highlight for many attendees (including this one) was the chance to meet Jason Wu. He was in attendance throughout most of the event and spoke several times. During the final gala, he took questions from the audience and later signed dolls and posed for photos with attendees. Charmingly a bit shy, the iconic designer handles his celebrity with poise and seems quite unaffected by all his accomplishments. What an honor it was to hear him speak.

The December issue of DOLLS features a Wu cover doll and corresponding story about the convention collection of dolls, RE-Edition. Also, the story talks about his decade with Integrity Toys and what the special landmark means to him and his design team. The digital edition features more photos and dolls from the collection.

Also, the full convention coverage, including video and an article, will be coming in an upcoming issue of DOLLS. Stay tuned!

Click here to see some photos from the event. 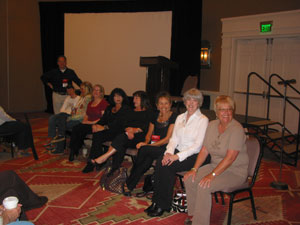 Modern Doll Collectors Convention 2010 to Be Held in Winston-Salem, N.C.