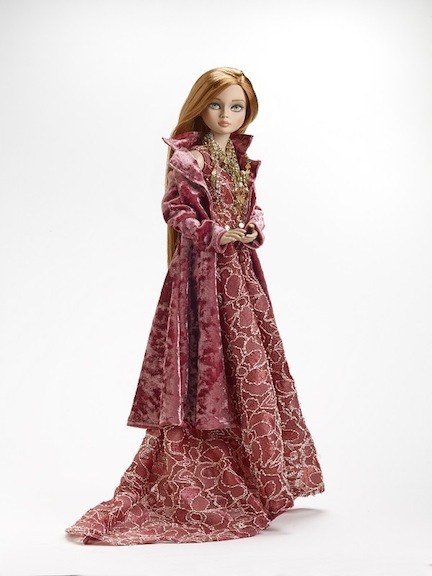 Ellowyne in her Wistful Rose costume, a 2018 Holiday Debut

One of the quirkiest things about TV shows, soap operas, and long-running movie franchises is when an actor switches a role. It happened on TV’s “Bewitched” and “Roseanne,” plus every daytime episodic show that has ever aired for more than a decade. How to get around having a brand-new performer taking on the part of a well-loved, well-known character? For daytime dramas, the answer is always a simple one: plastic surgery. And master artist Robert Tonner is slyly, and humorously, going that cosmetic route as well with his 2018 Holiday Debuts.

Ellowyne Wilde and Evangeline Ghastly are being resurrected by Tonner’s new Phyn & Aero company, and the two heroines are being given gentle face-lifts by Tonner for their 2018 Holiday Debuts. Both Ellowyne and Evangeline are getting new head molds and brand-new bodies too. In fact, Ellowyne’s current calendar entry breathily refers to her anxieties about her new appearance: “Ellowyne just didn’t know what to think. She was coming back and hadn’t seen her dear friends in ever so long. What should she wear to make a good impression? She knows she’s changed — would they even recognize her?” 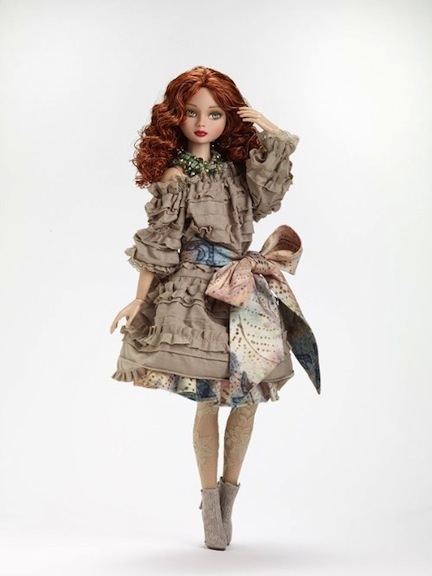 Good old Ellowyne, though, borrows a page from literary icon/movie diva Scarlett O’Hara and decides not to fret about it. Doing her best Vivien Leigh, Ellowyne states: “Well, I just won’t think about it now.” Yep, Scarlett always maintained that “tomorrow is another day,” and this pretty procrastinator follows suit. The new 2018 Holiday Debut, who doesn’t want to have her good time ruined by cosmetic speculation, is called Ruffled Up Ellowyne. Limited to only 150 pieces, the hard-plastic/vinyl doll has 15 points of articulation. The doll, priced at $225, features the new molded Ellowyne head, and her rooted auburn saran hair flows in “beach waves.”

One of the hallmarks of the Ellowyne doll story was that she never could have a totally happy time. Despite all of her gifts — beauty, style, grace, and being sculpted by Robert Tonner — she suffered from boredom and ennui. She couldn’t escape that feeling of discontentment. Tonner has freed her enough from the blasé blues by letting her mix and match the Ruffle Up ensemble. Still, he concludes her brief bio by having her muse: “But still, will they remember me?” The 2018 Holiday Debuts of Ellowyne Wilde will jar collectors into reminiscing fondly about this well-strung, high-strung doll.

“Many of you may remember that October 31 is the birthday of one of our favorite characters from years past — Ellowyne Wilde. In honor of her birthday and in answer to many requests, we have re-made the head mold for Ellowyne. We’re bringing her back to you in a very limited-edition series, being released November 5. Delivery will begin in 2019.” 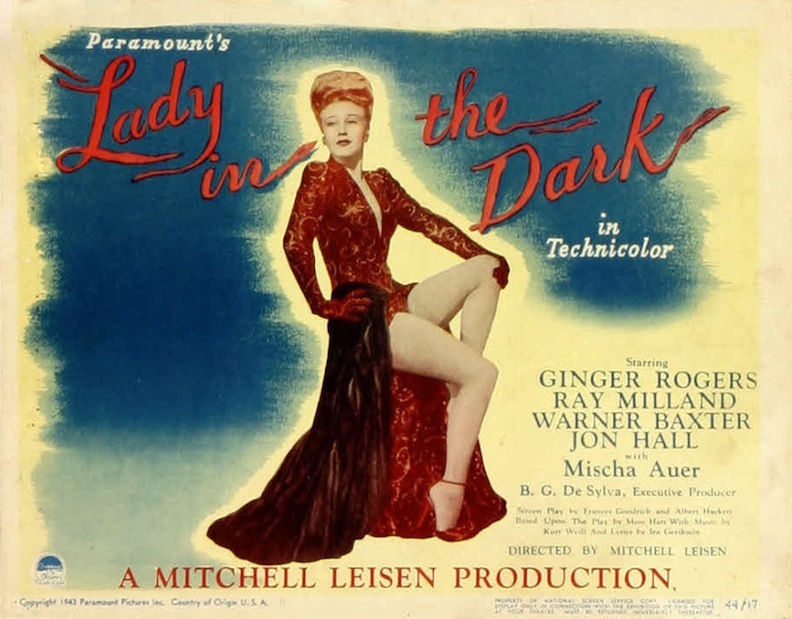 Psychoanalysis was at the heart and soul of the 1940s musical “Lady in the Dark.” (Photo courtesy of Movie Star News)

Ellowyne, who had been in therapy with Dr. Bantam during her first incarnation, is the epitome of a character who is always in search for a deeper answer, a more complex reason. As a fashion doll, she was always quite lithe and lovely. Tonner giving her a turbulent nature — a combination of ennui and melancholy, concern and confusion — was rather groundbreaking. In her first go-round, Ellowyne would chronicle her feelings in journal entries. She’d recount her social interactions with friends and family, but she’d confess “It’s not that I’m not happy, or even sad — it’s just that, well, I just can’t figure it out …”

This is quite fascinating. Barbie, Mattel’s iconic teen fashion queen, has pursued hundreds of careers over her near-60 years of existence. Despite all her professional advancements and job searches, we never know what makes her tick. (I suppose the closest we ever came was when one of her talking versions admitted that she hated math.) Tonner dared to release a doll that was in psychoanalysis and was writing to find out what was at the crux of her existence. This is pretty daring stuff for a fashion doll, and that’s one of the reasons why it is in the purview of adult doll collectors. The additional 2018 Holiday Debut is the stunning Wistful Rose creation. 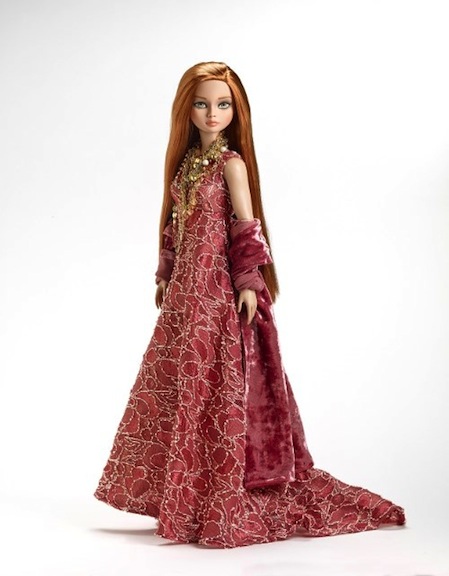 Ellowyne in her Wistful Rose sleeveless gown, wearing her heart on her sleeve

Ellowyne decides to attend a party and chooses a sleeveless rose lace dress. It’s just one of the many outfits that is hanging in her cramped closet! Her dinner date, Rufus, is so impressed by her appearance that he gushes: “You look great, my Wistful Rose!” Hence, the name of the 2018 Holiday Debut release. The Wistful Rose is limited to 150 pieces, and is priced at $225. With her flowing hair and flowing gown, she epitomizes the glamour and sophistication of a bygone era. She also reminds me of the heroine of the cult classic “Lady in the Dark.” An entrancing collaboration between Ira Gershwin and Kurt Weil, the musical follows the therapeutic journey of Liza Elliott, a fashion-magazine editor who is undergoing psychoanalysis. This was an unusual topic for a musical back in 1941, and it proved a little too out-there for most theatergoers. It became an abridged/altered movie musical in 1944, with Ginger Rogers, and a TV special in 1954 with Ann Sothern. 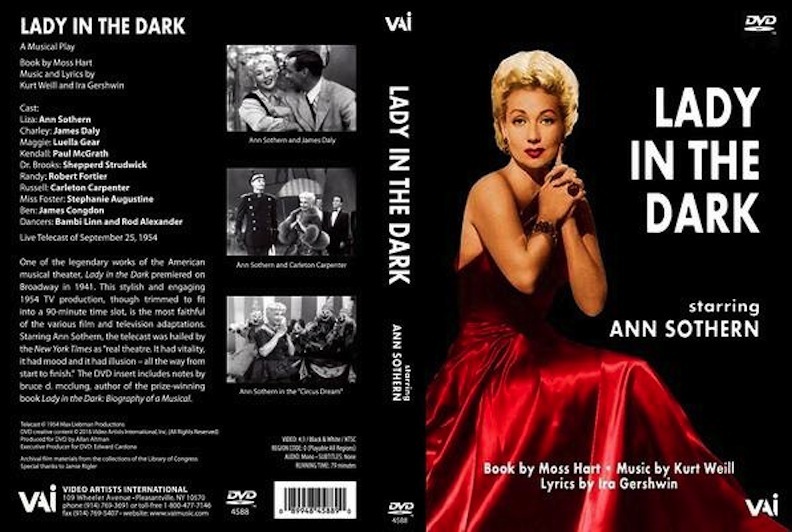 Psychoanalysis was viewed as a sophisticated pursuit in the late 1940s and 1950s. Ann Sothern starred in a TV version of the musical. (Courtesy: Movie Star News)

Joining Ellowyne as part of Tonner’s 2018 Holiday Debut are supernatural Evangeline Ghastly and pretty-as-a-picture Patience. Limited to 175 pieces, Drop Dead Red Evangeline is priced at $235. Like Ellowyne, Evangeline has a new head mold and body. How does this eerie mortuary worker explain her re-appearance with a different look and attitude? Tonner borrows the age-old dream scenario. A lot of different events can occur during a character’s dream sequence — in fact, entire seasons of TV shows can be dismissed or revised based upon a powerful, cogent dream. 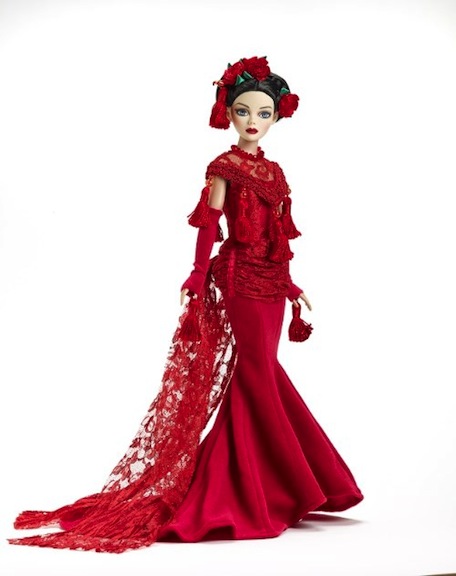 Evangeline shares: “I’ve such a headache! The last thing I remember is lying down to take a nap — something I find infinitely helpful. However, this time it seemed different. When I woke, I felt, well — just strange. And, I think I look not quite the same. Of course it could be the mirror; she’s always playing tricks on me!” Oh, that Evangeline and her surreal, otherworldly accessories. In her strange world, it could indeed be the looking glass that is monkeying around with how she looks. Like Alice who could never quite control her size, shape, and appearance once she shattered through the looking glass, Evangeline also resides in a demi-world of eccentric characters, Addams Family-worthy oddities, and scary, chilling revelations. The Drop Dead Red Evangeline doll is absolutely breathtaking and breath-stealing. 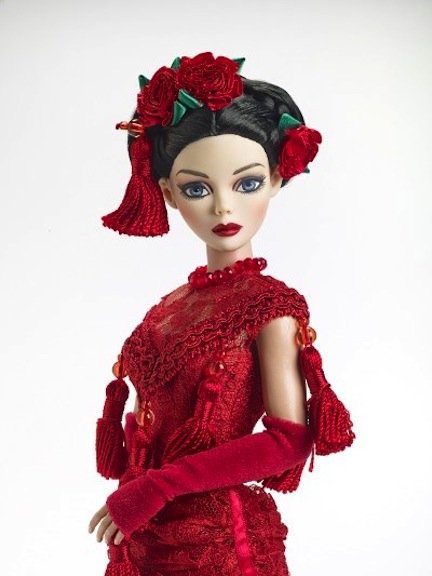 Evangeline Ghastly’s head is newly molded; it is unveiled as a 2018 Holiday Debut.

The third 2018 Holiday Debut is the graceful and gentle Patience doll. A character that always stood for the wholesomeness of youth, Patience remains very much the same. She is still a testament to wide-eyed childhood innocence and imagination. Her eyes are still huge and “flirty,” and her eyelashes are applied. Featuring 12 points of articulation, Just Have Patience is the newest version of this beloved Tonner classic. Limited to 225 pieces, the doll is priced at $175. 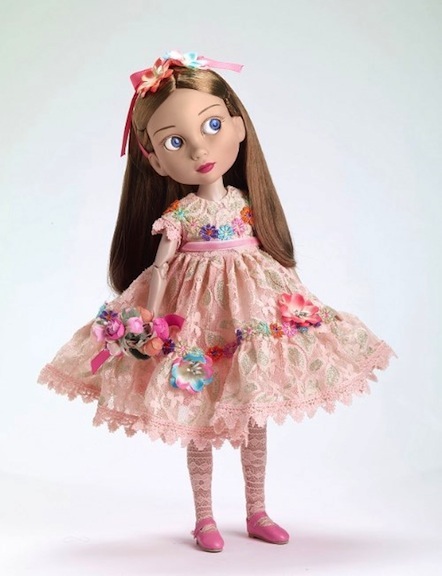 Just Have Patience pays tribute to the sweetness of little girls. With her flower-bedecked dress and floral headdress, she is a welcome imp who brings spring with her. Like Ellowyne and Evangeline, Patience is a great addition to 2018 Holiday Debut dolls from Tonner and Phyn & Aero.