Author and doll historian Karen B. Kurtz released her children’s book “Sophia’s Gift,” illustrated by Loran Chavez, in March. In May, Kurtz and Chavez were informed that they had won a Gold award in the 2021 Human Relations Indie Book Awards in the category Cultural Human Relations, Children’s Books.

Based on a true story from Civil War-era Virginia, “Sophia’s Gift” follows Sophia Strauss, a child growing up in Culpeper, Virginia, in 1862. Sophia and her mother, Caroline, nurse a wounded Confederate soldier back to health. When he recovers enough to travel, the soldier gives Sophia a German china doll as a token of remembrance. Sophia names her new doll Grace Darling after a popular British Victorian heroine, Grace Horsley Darling, and treasured her beloved plaything for the rest of her life. The original doll is preserved today at The American Civil War Museum in Richmond, Virginia.

Kurtz’s inspiration for the book dates back to 2010, when she received the Coleman Award from The United Federation of Doll Clubs (UFDC) in to document Civil War dolls with provenance. Kurtz and her photographer-husband, Mark, traveled to The American Civil War Museum to investigate dozens of dolls that curator Cathy Wright had arranged on white-covered tables.

“The doll named Grace Darling immediately captivated me with her enchanting name, bright facial features, and well-preserved original 1860s costume,” Kurtz said. The couple spent several days at the Museum documenting dolls and taking photos, then repeating the process at other museums and historical societies around the country.

“Grace Darling’s provenance was difficult to unravel,” Kurtz said, “because it was international in scope. Filling in the missing links meant investigating early doll manufacturing in Germany, checking and rechecking multiple locations in Virginia, and mulling over a casual turn of phrase in the provenance, which led to investigating the life and times of the doll’s namesake, Grace Horsley Darling, in the UK.”

Intended for readers age 8 and up, “Sophia’s Gift” presents a glimpse into the daily activities of women and children during the American Civil War. The 32-page hardcover book also includes provenance and historical notes, color photos, and a map, in addition to Chavez’s watercolor illustrations. The book is available at Amazon and other major book retailers; signed copies are available at sophiasgiftbook.com. 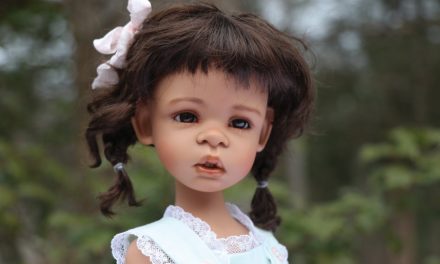 A New Doll or the Next Best Thing