Somewhere between 1912 and 1925, the Simon & Halbig company produced a 14.5-inch lady doll. She had a small number of head variations but was always on the same body, which was unusual for the period and a small sign of the changing times. This was basically a high-end play doll for children whose dolls usually consisted of babies, toddlers, and young children.

These lady dolls had narrow shoulders, a hint of a bust, a narrow waist, and distinctly womanly hips. Add their narrow arms with delicate hands and long slim legs with a narrow high-heeled foot, and this doll might very well have been the Barbie of her time.

The original dolls had porcelain bisque heads with glass eyes on composition bodies (composition was sawdust, glue, and several other possible secret ingredients pressed into a mold, then painted and shellacked). Without going deeply into the history, this body came with a Simon & Halbig 1468 head, a Cuno and Otto Dressel 1469 head, and a Simon & Halbig 401 head. (I’m sure other heads have been found on these bodies, but we are sticking to the basics for the moment.)

There aren’t many of these dolls on the slender lady body available to collectors today. Being playthings, one obvious conclusion is that a great many were played with, broken, and discarded. In addition, it’s possible that, being slightly unusual dolls for their time, large numbers weren’t made in the first place. Finally, it seems that modern collectors have for quite a while now found these dolls to be charming and have scooped them up into collections, where they stay cherished.

Our new 1470 dolls are directly descended from the Cuno and Otto Dressel 1469 body and head. Get it? 1469 — 1470! The next number up! I think you got it. By numbering our dolls 1470, they avoid the risk of, however unlikely to serious collectors, being mistaken for one of their antique cousins. It also gives us a chance to give the 1470 young women a bit of their own identity.

The 1470 dolls are 14.5 inches tall, just like their antique cousins, and their bodies and heads are identical in size and proportion. The 1470 dolls have porcelain bisque heads with glass eyes and pierced ears. Unlike the antique dolls, the 1470 dolls also have full porcelain bodies. This choice does a couple of things.

When the antique dolls were made, composition was cheaper than porcelain to produce — now it’s more difficult to produce a composition equivalent. Also, composition can be hard to match to the porcelain head color. It can fade, stain, craze, and crack. The porcelain bisque body will match the head perfectly and never stain, fade, or yellow — our porcelain bodies are strong.

Ultimately, the 1470 dolls are fashion dolls and will have the wardrobe to prove it. Each doll comes with her wig, earrings, dress, lace panties, stockings, shoes and stand. Their additional clothing will be done in limited numbers, from 20 pieces to 60 pieces, depending on materials since many items will be made with vintage and antique fabric, trims, and buttons.

The dolls and clothing are being made right now and should be ready to ship to collectors before Christmas. We will be continually adding to the clothing collection and are already working on the 1471 dolls for early next year.

Find out more about the 1470 Collection at the Happily Ever After website.

Doug James is a long-time doll designer and theatrical and film costumer. He’s worked with several companies and doll lines, including Gene Marshall and Integrity Toys. He also formed his own company, JDJ International, to release his own lines of 16- and 19-inch fashion dolls. 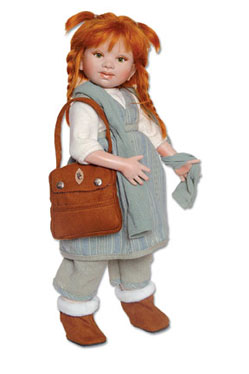