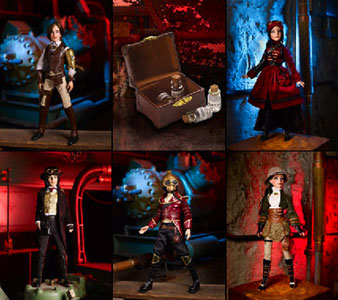 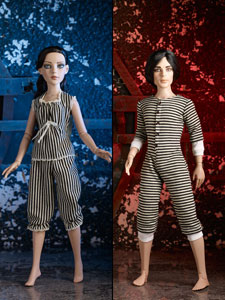 Theodora and Phin are just your average, run-of-the-mill siblings who have run-ins with robots, espionage, adventures, and time configurations. They are the perfect hybrid of hypotheses and high fashion. 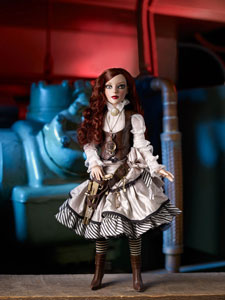 Theodora Curiosity Bennett is a woman of her time . . . and beyond. She emerges from the creative collaboration of Wilde Imagination and Robert Tonner. 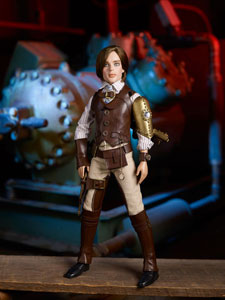 With a nod to the futuristic author Jules Verne, Tonner and Wilde Imagination have dubbed their hero Phineas Jules Bennett. 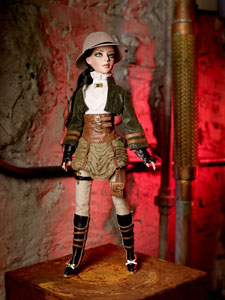 Clad in her “Military Theory” costume, Theodora showcases an appreciation for martial arts and war construction. She’s a gamine with a war-game strategy! 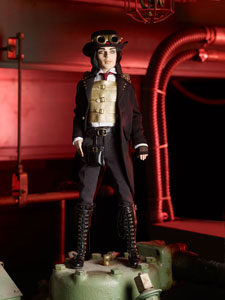 Phin is looking timely and oh-so-current in his “Clockwork Hypothesis” outfit. 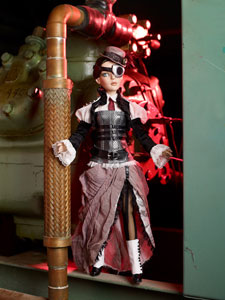 Time is always on the mind of steampunk time travelers and scientists who seek to bend and unbend the time-space continuum. 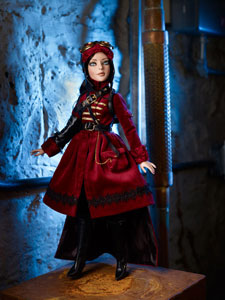 Airships and balloons often fill the skies in the cities of steampunk fiction. Theodora is stunning in her “Airship Escape” outfit. 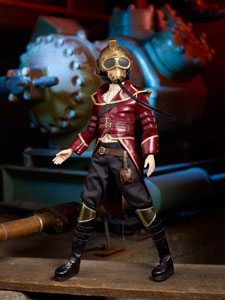 Who lurks beneath the captivating “Airship Captain” outfit?

If you’re like me, you’re always looking for something fun (and economical) to do with your kids. Going to the movies used to be a weekly or monthly excursion for families, but now in the Northeast, when admission for 2 adults and 2 kids can easily escalate to $45 and beyond, movie-going is a four-times-a-year affair, if at all.

Instead of heading out to the theater, we’ve let the movies come to us. We’ve enjoyed temporary Prime memberships with Amazon that allow participants a month’s worth of free movie and TV show viewing. Among the titles that are part of the freebie extravaganza are a bunch of golden oldies—Hollywood blockbusters from the 1950s and 1960s that often leave today’s heavy CGI-generated thrills in the dust.

Over the past two months, we’ve been thrilled by cinematic depictions of H.G. Wells’s “The Time Machine” and “The Invisible Man,” Jules Verne’s “Twenty Thousand Leagues Under the Sea,” “Journey to the Center of the Earth,” and “Around the World in Eighty Days,” as well as the lesser-known “Five Weeks in a Balloon.” We’ve watched the modern Verne-inspired “Journey 2: The Mysterious Island,” starring the Rock (and, believe it or not, it’s much better than you ever would imagine).

One of the great appeals of these flicks is that it blends a smattering of science with a healthy dose of fiction—hence, science-fiction, or sci-fi for short. Even more entertaining is how the filmmakers and the original authors set up these scenarios where the characters are clad in full Victorian and Edwardian gear, but are traveling through the air, the oceans, and through the barriers of time itself with newfangled, mind-blowing contraptions. It’s the genesis of the whole “steampunk” movement, which has gained steam over the last five years or so with the doll-collecting populace.

What is it about steampunk and its attendant bells and whistles that so appeal to every age group and gender? Why do we all fall under the spell of a bustle-wearing young woman who is equally adept at reining in a horse and calculating the distance from Covent Garden to the Martian Canals? Just what is it?

If we asked my husband—and other guys in their late thirties, forties and fifties—I envision that their answers would focus on the formfitting corsets and décolletage-revealing gowns that the women wore. I have to suspect that there is something arousing about a comely young lady garbed in a bosom-baring dress, holding a telescope in her primly gloved hands. (Dr. Freud, you can fill in the blanks for me.)

Spy scopes and sexy gals aside—the steampunk genre lets all of us feel a little bit brighter and forward-thinking. We know that these techno items didn’t get invented during the Civil War era, and we’re sort of aware of how they work (or at least what they are capable of doing in real life), so we all get a thrill and a tingle of excitement out of having our modern-day savvy sent back 100 or more years.

Doll artists truly enjoy this meshing of modernity with the historical because it lets them re-create what was real and what was worn 140 years ago, but add an unexpected bit of leather or steel to the overall effect. It’s a chance to conjure up Clara Barton or Florence Nightingale and equip her with a state-of-the-art medikit plus a hovercraft ambulance. Who wouldn’t jump at the chance to blend the limitations of reality with the wide-open invitation of imagination? Steampunk lets the creators and the collectors meet in a bygone era and approach that time period with both reverence and revisionism. It’s a great hobby for fantasy fans and history buffs alike. It’s a rare moment when the wisdom of today can interact with the innocence and promise of yesterday—forging a prediction of a better tomorrow! That’s pretty Einsteinian in its relativity!

One of the steampunk storylines that I’m most interested in is the Robert Tonner and Wilde Imagination collaboration of Imperium Park. Featuring a headstrong brother-and-sister duo, the aptly named Theodora Curiosity Bennett and her brother Phineas Jules (a nod to Jules Verne, if ever there were one).

The siblings live with a scientifically brilliant uncle, Professor Kingsley Avery Knightsblood, who took in his beloved niece and nephew when they were orphaned during their parents’ wartime skirmish with a Beastealiax patrol.

These three principal players are surrounded by characters right out of a ripping good yarn: there are loyal and lovely lab assistants, handsome and dashing soldiers, and an automaton that might hold the key to all of the surrounding mystery and adventure.

If this weren’t a doll collection, it sounds like the basis of a summer blockbuster movie direct from Steven Spielberg or Jon Favreau.

The premise of the doll line is absolutely first-rate, and the photos that I’ve seen so far totally capture that spirit of what-might-have-been with what-actually-was. The costumes and the props are a terrific match of antiquated items with a futuristic charge.

I have to admit that I have been reading the Imperium Park site and the Wilde Imagination website and wishing that I could teleport myself to their convention in Louisville, Kentucky, during October 5 to 7. (http://www.wildeimagination.com/t-ip-news.aspx) However, my real-life constraints will keep me tethered to home, but my inner desires will have my sensibilities soaring toward that convention site like a balloonist locating a good headwind.

If wishes could fly, I’d be winging my way to the magical alternative world of Imperium Park. In a steam-powered airship, of course!