A Touch of Evil: Disney debuts a lineup of designer villains that are gorgeous and ghastly! 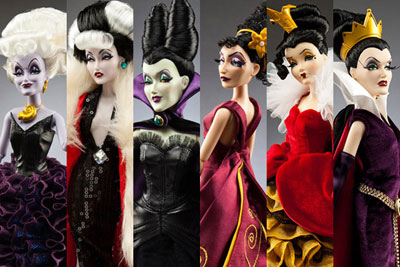 Gothic and daring, gorgeous and devious, the six limited-edition versions of Disney’s “bad girls” are available to buy online on August 20, in select stores on September 10. They will be on hand for a limited time—as long as merchandise is available. 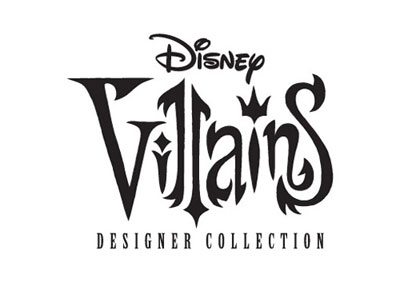 The Disney Villains Designer Collection is a way to make “costume drama” three-dimensional and spectacular. 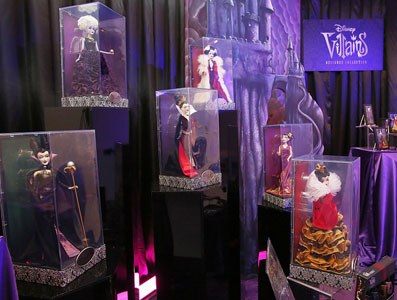 The six limited-edition dolls are packaged and presented in a theatrically thrilling way. 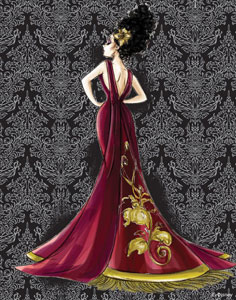 The sketch of Mother Gothel from “Tangled” showcases a woman who is all about appearances and show-stopping silhouettes. 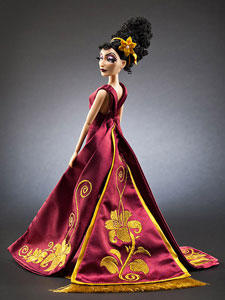 The artist’s drawing of Mother Gothel seamlessly morphed into this limited-edition doll that is undeniably imperious and image-conscious. 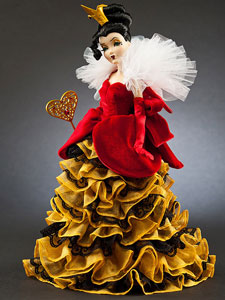 Alice’s nemesis is a wondrous example of great taste but rude behavior. Known to bark, “Off with their heads,” this Queen of Hearts has a spectacular hairdo and resplendent royal ensemble. 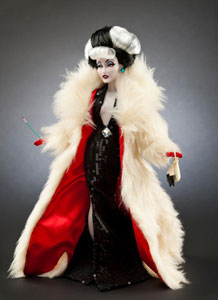 Cruella de Vil is not shy about wanting to capture and convert a pack of dogs into a fall fashion statement. Here the nasty PETA foe is tricked out in a huge faux fur coat and a risqué gown. 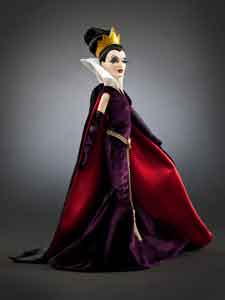 The Evil Queen from “Snow White” is conceited, insecure, and heartless. Maybe that’s why she wants Snow’s heart? 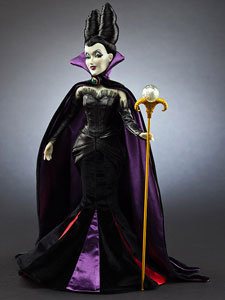 In one word: magnificent! Maleficent is certainly every inch the charismatic and powerful “Mistress of All Evil.” 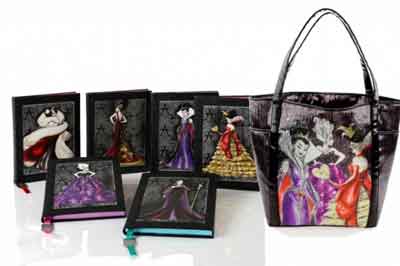 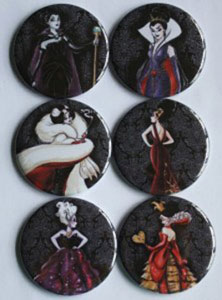 Who do you see reflected in you? Are you a tad more evil or wicked? Underhanded or over-the-top? Whichever of these baddies is a good time for you can be found in which compact mirror you select. There’s also lip gloss and eye shadow available. 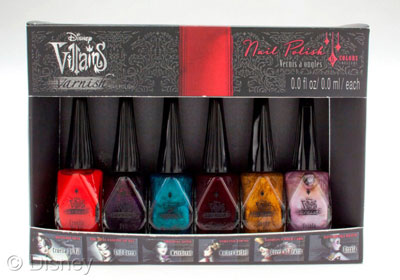 From head to toe, a villain fancier can doll herself up as her preferred princess-pusher. Villain Varnish is the perfect way to color one’s nails in the spirit of Ursula or Cruella or Maleficent. What a fun fashion accessory!

I think Mae West was onto something when she drawled, “When I’m good, I’m very, very good. But when I’m bad, I’m better.” There’s something very compelling about watching a bad person having a real good time—when it’s safely being projected on a movie screen or a Broadway stage, of course. Witnessing a “Goody Two-shoes” always putting her best foot forward can grow dull and repetitive for a grown-up sensibility. Sure, many little girls want to dress like and act like Cinderella, Aurora, Snow White, and Ariel. However, for the adult viewer, give us Maleficent or the Evil Queen any day of the week! The villains who squirm and shimmer and shine and shout their way through many Hollywood vehicles are the characters with the wittiest lines and the most complex motivations. In the world of Disney cartoons, it’s the bad guys and gals who have the spoken lines and the animated lines that make “evil” both alluring and disturbing.

Knowing that there is a certain charisma to this rogue’s gallery of wicked women, Disney has launched their “Villains Designer Collection.” Starting next week online (August 20) [http://www.disneystore.com/] and on September 10 in select stores, six limited-edition dolls are going to be bringing their woeful ways to a whole new, three-dimensional level. Up for the “terrifically terrible” team are dolls of Mother Gothel from “Tangled,” Ursula from “The Little Mermaid,” the Queen of Hearts from “Alice in Wonderland,” the Evil Queen from “Snow White,” Maleficent from “Sleeping Beauty,” and Cruella de Vil from “101 Dalmatians.” What a lineup of ladies who have a little bit of the tramp and scamp in them!

What’s so appealing about these new dolls is that they are so dramatic and so fashionable. They’re all streamlined—particularly in the case of underwater nemesis Ursula—and appear slick and thin and naughty. Imagine Janice Dickinson at her bitchiest on “America’s Top Model” and you’ve got this range of creations. They’re all decked out in haute couture, but beneath the frippery and the finery, you sense that there is nothing fine or feminine. These are divas who are not for the faint of heart—after all, didn’t the Evil Queen request the beating heart of pure, little Snow White as a token of the huntsman’s allegiance?

Yep, the Disney Villains are over-the-top in their getups, and their packaging and presentation tie in with a feeling of exclusivity and preciousness. I was happy to see Ursula done up as a high-fashion hybrid of Phyllis Diller and Marie Antoinette. There’s no other way I can describe the translation of this octopus into a glamour puss. It’s absolutely mind-boggling how she has been re-imagined as a Gothic high priestess.

New kid on the block—as far as movie history goes—Mother Gothel, of “Tangled,” is unveiled as a sexy, saucy minx. Her hair is piled high; her dress’s train is long and lush; and her expression is one of haughty distaste. Mother Gothel is a nightmare of overprotection—secreting her stolen daughter away in a tower, allowing her tresses to grow wild and free, but keeping Rapunzel’s body under lock and key. Let’s say Gothel makes Joan Crawford look like “Mother of the Year.” Still, this new arrival in the “Hall of Shame” was voiced by Broadway veteran Donna Murphy and she pulled out all the stops in making a character who is prideful and willful, seemingly maternal and caring, but downright devious and dangerous. It was a performance worthy of a great stage veteran—fully realized and fully terrifying.

In addition to these two baddies, Cruella de Vil also cuts a memorable figure. Her full-length fur coat silhouettes her like a Yeti prancing on a catwalk. The dognapper’s gown is low-cut and features a high slit on the side. With her black-and-white coiffure, she comes across like a sloe-eyed Bride of Frankenstein: magnetic but menacing. It’s quite a depiction!

All of these dolls are gorgeous, and it’s easy to see why this program was in the conceptualizing stage for 18 months. Each one has a definite air of beauty and bewitching complexity: with the emphasis on “witching.”

Steve Thompson, principal designer of the Disney Store, emphasized that “we took a different path with our ‘bad girls.’ They have a more contemporary design aesthetic. We didn’t want to interpret them literally. Instead, we communicated each character’s essence in an impressionistic way. We’ve never done anything like it before. It has been a truly collaborative effort. It’s been amazing to see Sang Plumlee, the Disney Store doll designer, take the drawings and create these three-dimensional artworks.”

In addition to the dolls, the Disney Villains Designer Collection consists of a whole array of elegantly evil extras: there are wallets, tote bags, apparel, mugs, journals, note cards, limited-edition lithographs, and more. Most eye opening are a host of cosmetics that key into the villain’s colors and auras: here’s a chance to add eye shadow, lip gloss, and nail polish that reflect your inner Queen of Hearts.

Jessica Drummer, senior manager of fashion merchandising, shares that she and her team “worked hand-in-hand with the doll designers to choose colors and design aesthetics that give the entire line a cohesive feel. The cosmetic colors tie back to the characters and their gowns, so they’re darker and edgier, yet very wearable.”

Here’s an opportunity for anyone who ever championed Alexis Carrington (Joan Collins) over Krystle (Linda Evans), Archie’s Veronica over Betty, Angelina Jolie over Jennifer Aniston!

If you can look at Aurora’s archenemy, Maleficent (to be voiced, incidentally, by Jolie in late 2013/early 2014), and react to how magnificent she looks in her cape and bustier, this is the doll collection for you. Certainly, it’s nice to be nice, and politeness is a welcome virtue in a houseguest. But if you want to applaud people behaving badly and broadly—and then getting their final comeuppance in a barrage of inventive ways—take home a Disney Villain today. Even a cruel queen deserves a good home! 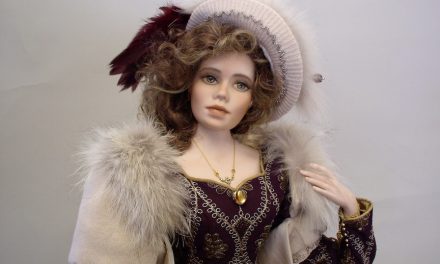