What Is the Fate of Doll and Toy Publications?

Few people would argue that the doll industry is a shadow of its former self—that its heyday of the ’80s and ’90s is long past. As a relative newcomer to the doll industry, I wasn’t around in those days. But have I heard stories. So many long-time doll industry people remember packed-out shows with collectors rushing to get through the doors to buy up dolls. And they remember doll magazines being as thick as Cosmopolitan, and the high demand for collectible dolls driving up doll prices.

But the industry has changed since then. Dolls have ceased to be viewed by the masses as a way to invest money and make a quick buck, so mostly the market that remains are people who truly love dolls. From what I’m told and what I’ve learned in the last few years, that pool is pretty small.

In response to the changing market, doll companies have changed, too. Some that didn’t went away. Others adapted and survived. Still others sprang up, all over the world, catering to the contemporary collector’s aesthetic. Doll companies started selling direct online.

Some retailers closed shop, while others stayed relevant by increasing their online presence.

Meanwhile, as the doll industry swung downward and shrunk, so did doll magazines. The result? Three doll/toy publications—Haute Doll, Doll Crafter & Costuming and Playthings—have recently ceased publication because with lack of advertising support, they were no longer viable.

As a doll magazine publisher, it is indeed sobering to see these publications make their final print run. It’s sad to think of a world with no doll magazines covering the dolls and artists behind the magic. In order to survive though, doll magazines must change to suit the needs of the market. At DOLLS we’ve worked hard to do just that, thrusting our emphasis into digital media, with a significant Web presence, a digital magazine that’s now viewable on the iPhone and iPad, and a regular breaking news e-newsletter, DOLLS Updates.

Additionally, we’ve worked to cover the latest trends in the industry—from the very traditional to the most innovative doll designs.

But will this be enough? What do you think of the future of doll publications? Will doll magazines continue to exist? Or are doll magazines a part of doll collecting past, no longer relevant in the collectible world of the present and the future? 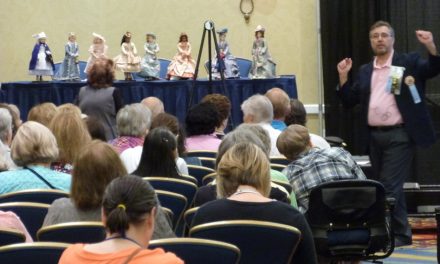 The Affects of Pop Culture on Doll Collecting