Silence Is Golden: Talkin’ up dolls and how they blazed across the 1920s!

If you are seeking a diversion to take your mind off the ill winds that are blowing, you can’t go wrong with the movie “The Artist.” A critically-acclaimed awards darling in 2011, the film was a modern-day silent opus. It told the story of an actor confronting his possible demise as a Hollywood leading man — talkies are taking over — and the screenplay unfolds as an actual silent film. You sit and you read the dialogue as you watch emotions flicker across the screen. It’s a satisfying and peaceful encounter — quite the opposite of the usual frenetic summer blockbuster fare.

I saw the movie when it first debuted, and I revisited it recently with my daughter (age 11) and one of her friends. It was fascinating to see them “watch” a movie. It wasn’t the usual passive interlude — all of us seated in front of a television set with colors pulsating, cars screeching, and actors cracking wise, while we silently watch and munch our popcorn. No, this was a film that only succeeded if it’s audience was willing to read along and, therefore, feel and emote along, too. 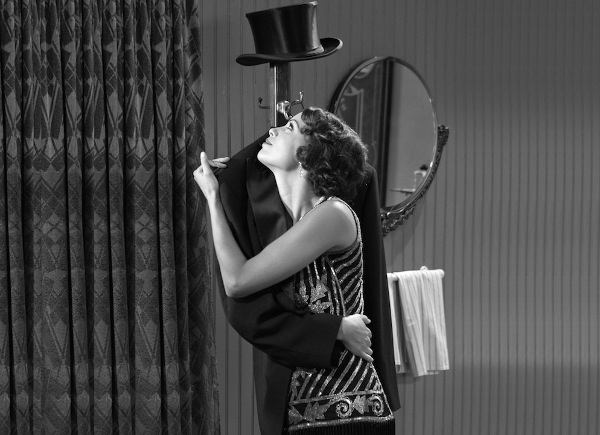 After we watched the movie, we talked about how different the world must have been when silent movies were all the rage: first off, the populace had to be deeply literate (those screen cards often were filled with heavy concepts and conversation) and they had to be willing and able to dramatize an entire storyline in their heads. It wasn’t just a single frame that had a caption attached — no, it was an entire 90-minute or longer movie that featured multiple settings, backgrounds, characters of different genders, ages, and nationalities. A silent-movie filmgoer had to imagine the sounds, the accents, the vocal tones, and the moods. 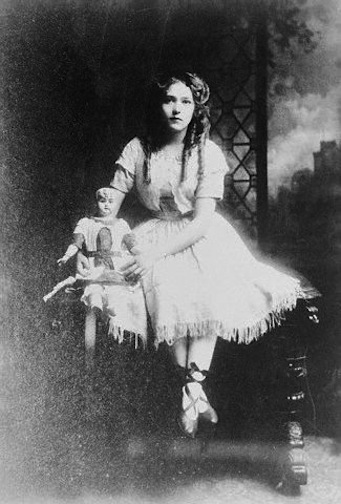 In the world of doll aficionados, we have to conjure up the tones of our dolls — how do they speak to us; do they speak at all; do they come with a backstory or are they simply room décor decked out in a dress? Each of us who embraces and then takes a doll into our hearts and homes is akin to a Roaring Twenties filmgoer. We are imbuing these quiet, silent effigies with souls and fully developed characters. Dolls turn us into silent-movie viewers and directors/authors.

From a doll angle, what’s really interesting is how the silent-movie days corresponded with the “boudoir doll” craze. It was a sign of sophistication and cosmopolitan savoir-faire to have a “poupee” that lounged across one’s bureau or bed. Grown women had their chaise lounges and divans draped with these divine dolls. Glamorous movie stars like Claudette Colbert, Marlene Dietrich, and Louise Brooks snuggled and showed off their boudoir or “smoking” dolls. They smooched their Kewpies and grinned broadly with their Gollies. Dolls were a vital part of the 1920s Jazz Age scene. 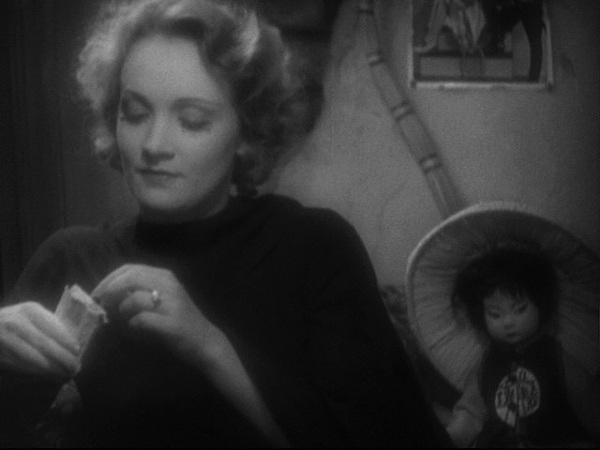 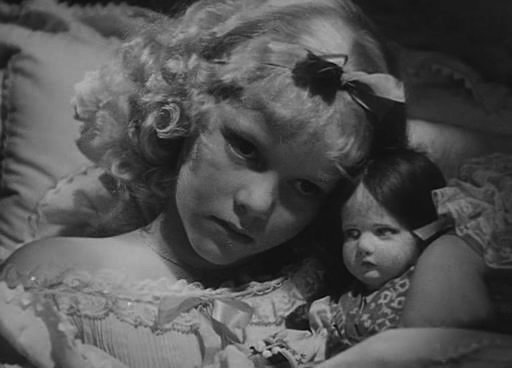 Marlene Dietrich and daughter Maria Riva are each paired with one of Dietrich’s personal Lenci dolls.

It’s fun to stroll back and see the number of movie stars who were positioned with their lookalike dolls or with the popular doll styles of their time. Imagine if suddenly there were a plethora of Vanity Fair photo spreads featuring Charlize Theron sitting beside a sun-kissed Barbie; Jennifer Lawrence canoodling with a Ken doll; J-Lo with her Mattel look-alike figure; Channing Tatum sharing layout space with GI Joe; and Johnny Depp mugging next to a Tonner re-creation. It would be pretty cool, wouldn’t it?

Because finances had been restricted for so long for women, finally having the power of the purse allowed them to buy items for themselves and for their own enjoyment. Women had grown more independent and self-sufficient during the flapper era. En masse, they blithely turned toward “turning down their hose” and then unapologetically acquiring decorative articles that made them happy. 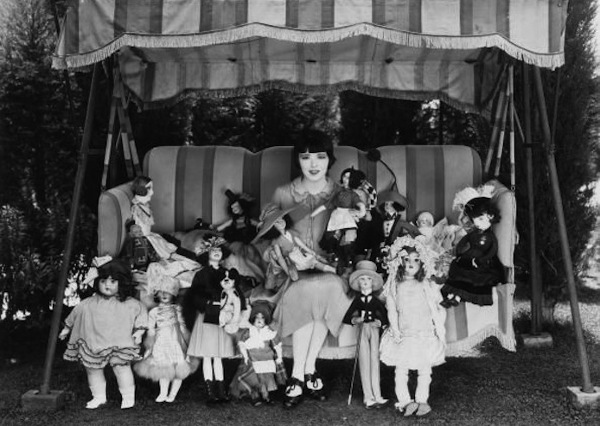 Colleen Moore and her enormous array of doll favorites.

Look at the movie stars of these wild and crazy days. It’s fascinating to discover the number of big-name idols who did sit down beside their tiny counterparts or next to dolls that were popular with female fans. Dolls were a must-have photo prop for magazine layouts and promotional photo shoots. 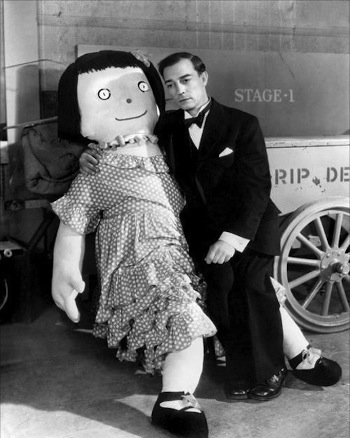 It makes a great deal of sense when you consider how incomes had increased in the post–World War I years, and the notion of disposable money was real. Not every penny had to be spent on essentials — luxuries could now be pursued and purchased without guilt. Also — and this is a BIG “also” — so many young men perished during the First World War, or came back maimed and changed, that young women realized firsthand how tenuous life was. Life could be snuffed out quickly and unexpectedly — these early feminists and flappers wanted to keep their youth and vitality alive for as long as they could. What better way than by collecting dolls and dancing till the cows come home? 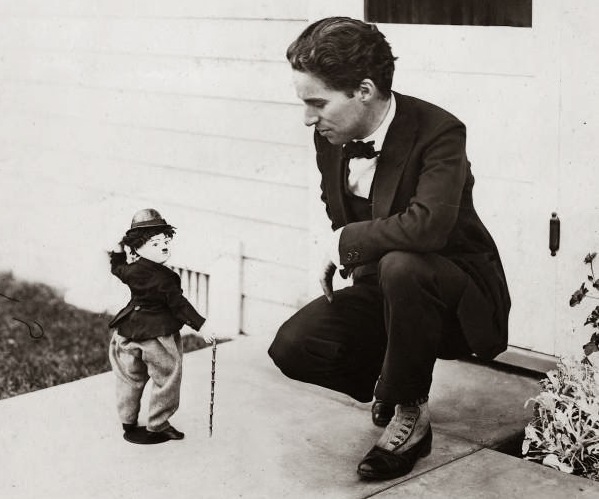 Charlie Chaplin and his “Tramp” doll.

The combo of the Charleston and the rise of the adult doll collector go hand-in-foot. These were all outward ways of celebrating youth, modernity, a better and more brilliant present, and hopes for a flashy and fabulous future.

Dolls have been a part of our world since before the Pharaohs, so it should not be a major surprise that they ascended to prominence — once again — in the early decades of the 20th century. It shall be intriguing to see if they pop up once more throughout popular culture: dolly apps, anyone? 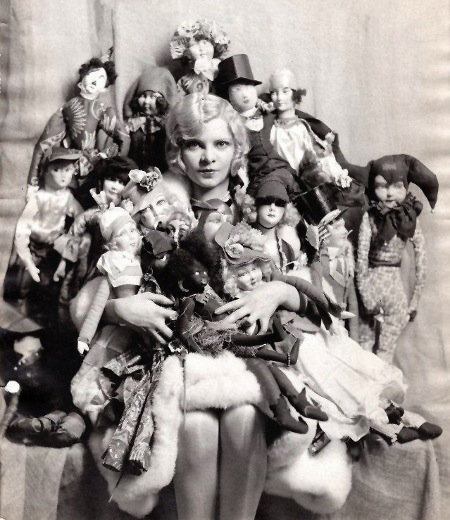 Whatever the future might hold in relation to dolls and their connection with the luminaries of our current world, we realize that we are a part of a collectible trend that has captured the greatest talents of the silent era, the mid-century movement, and the many decades that followed. As the marvelous Marion Davies might have uttered, “Oh, you kid and 23 skidoo!” 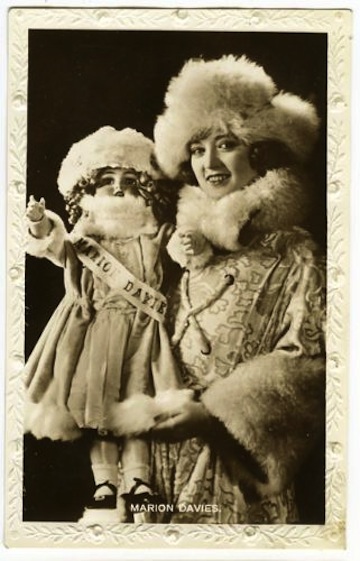