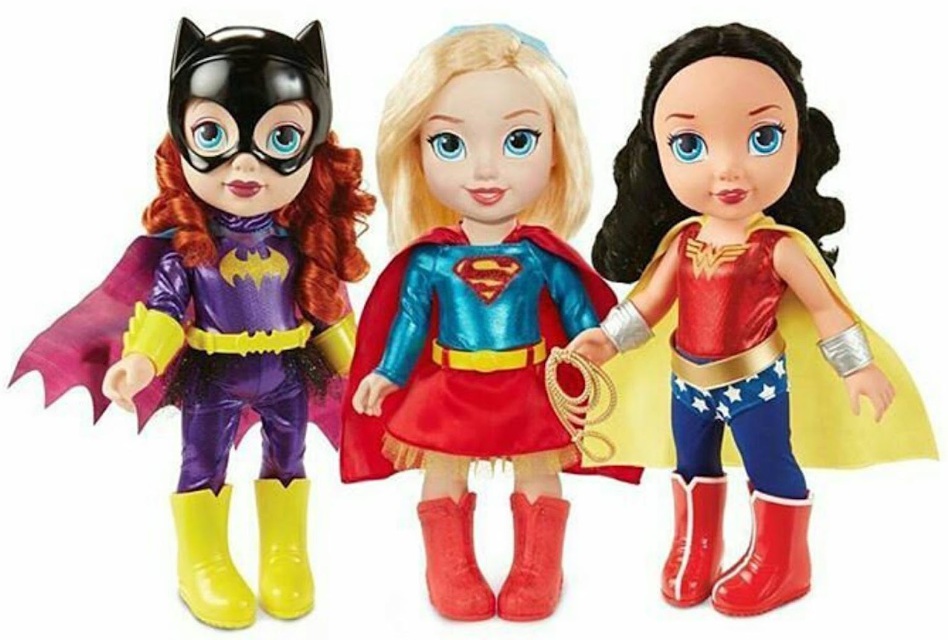 The week of 9/11 is memorialized in myriad ways. It’s easy for me to argue that it was the most impactful moment in our contemporary nation’s history, and in my personal biography as well. In a past blog, on a past anniversary, I told the tale of how I was trapped in New York City, a mere couple miles from Ground Zero, with a bag full of children’s books and Barbie dolls. It is emblazoned in mind. But the psyche of the post–9/11 world can be seen in our popular culture, from the novels we read (EXTREMELY LOUD & INCREDIBLY CLOSE) to the TV shows we watch (“24” and “Homeland”). 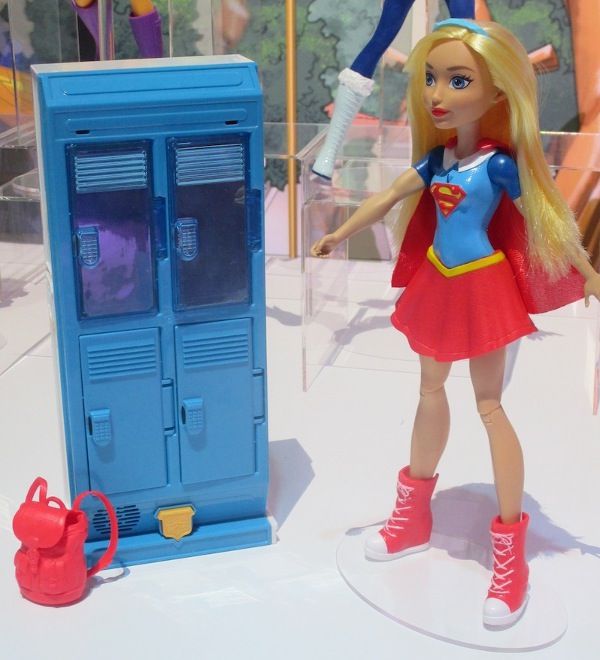 Supergirl and her X-ray-vision locker from Mattel.

The effect of 9/11 is also felt in the nation’s playrooms and nurseries. In other words, the toys (dolls, action figures, models) that followed in its wake are reflective of a nation that still yearns to be saved. 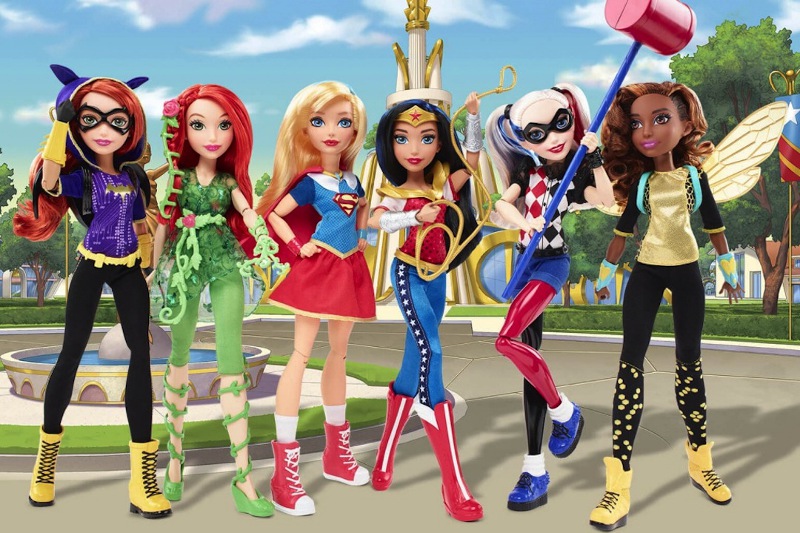 So many dolls these days are the three-dimensional renderings of movie characters. The films that flicker in our cineplexes and the collectibles that fill our shopping aisles are so incredibly superhero-based. All of us in America, and our fellow global citizens around the world, are like the power-ballad crooner Bonnie Tyler: “We need a hero.” 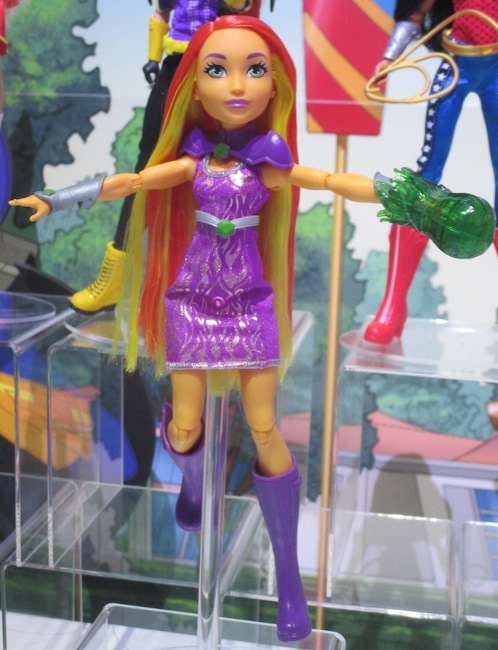 Starfire in her Mattel incarnation.

Back in the 1980s, Tyler belted out the lyrics to the Jim Steinman/Dean Pitchford collaboration. But in 1984, the song was a personal anthem — a young woman who is looking to be delivered from the fate of marrying — or at least hooking up — with a “nice guy.” (The song actually comes from the “Footloose” soundtrack! Everything really is six degrees removed from Kevin Bacon, isn’t it?) 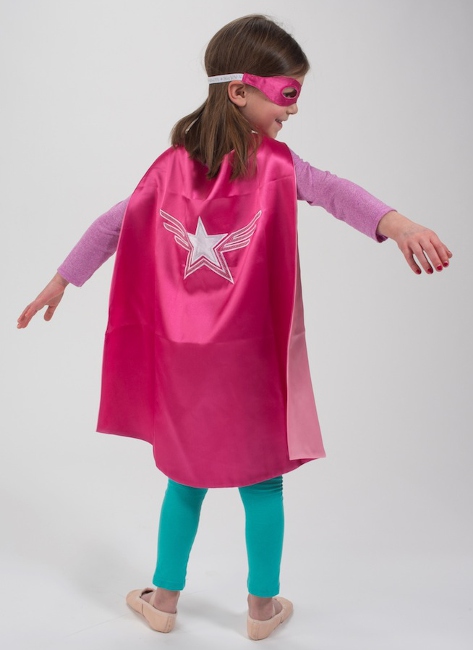 Now, with 9/11 behind us, the song summarizes what average citizens, politicians, and moviemakers are desperately yearning for: a hero to defeat the bad guys (and in many cases just honestly identify them). 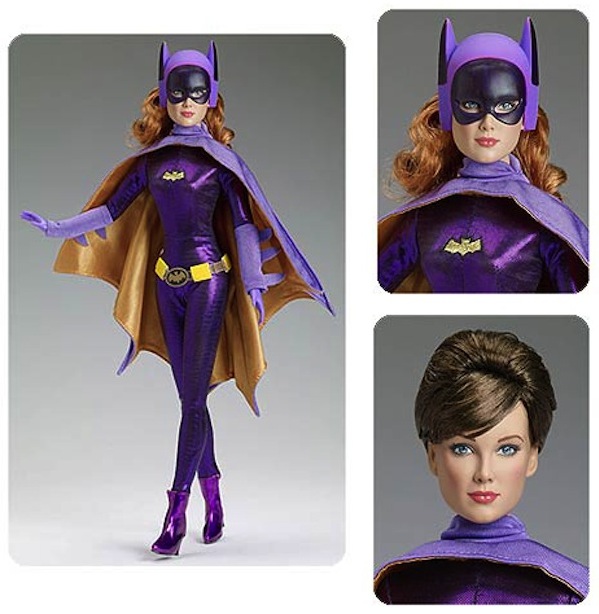 It’s not a coincidence, especially when there are enormous Hollywood big budgets involved, that there has been a rash of superhero movies. It seems that there is a comic-book character climbing to the top of the box-office heap every single week. Well-known franchises like Batman and Spider-Man just keep getting recycled and recycled once more. 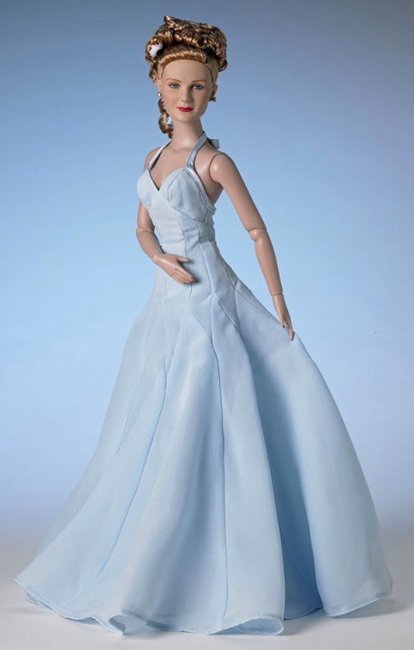 In the green-commerce world, environmentalists talk about eco-friendly business practices: reuse, refurbish, recycle, and upcycle. The producers and scriptwriters are following those guidelines. Every other year there is a new (and not always improved) actor inhabiting the Bat mask and cape. Likewise, Spider-Man keeps growing younger and younger with each installment. The newest version boasted a teenage, adolescent version of the crime-fighter. I think the next one will be “Spider-Man: The Sonogram.”

Folks want to feel shielded from “evil-doers,” to quote former president George W. Bush, so it’s not surprising that Captain America has joined the ranks of superheroes translated to the silver screen. The Silver Surfer also careened into cinemas in 2007. All the while, the DC Comic version of Manhattan (called Gotham City) and Marvel’s actual version of New York City have sustained billions of dollars’ worth of devastation onscreen. It’s always an attack against the Empire State’s doppelganger — an echo of what happened in reality these 16 years ago. 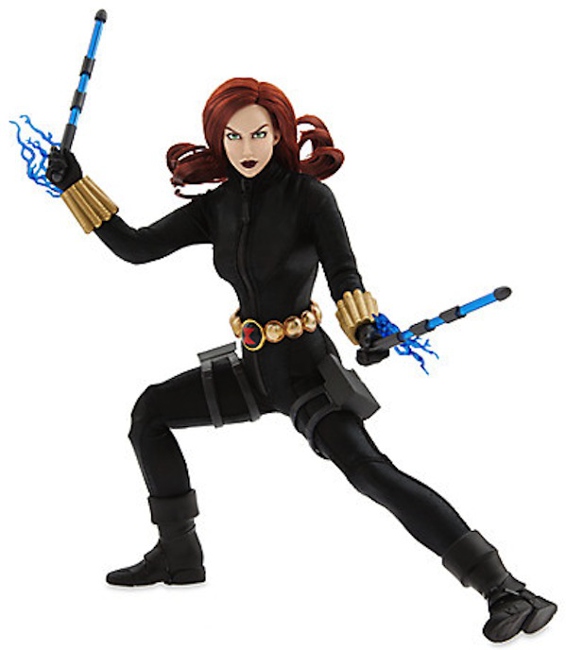 There have been male superheroes galore, and female ones, too, joining the graphic-novel-to-screenplay sweepstakes. I saluted Wonder Woman in a blog earlier this summer when her movie set weekend receipt records. Other females that have dived into the 9/11 chasm are Black Widow, Scarlet Witch, Mystique, and Harley Quinn, an antihero (antiheroine?) if ever there was one. 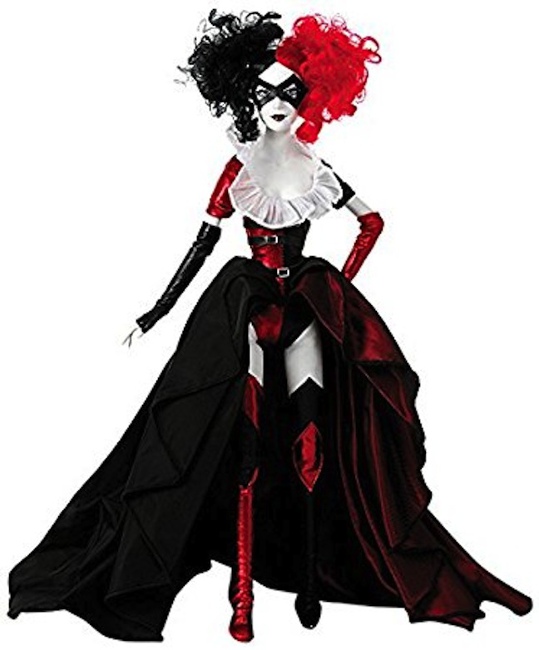 It makes sense that the movies we watch reflect the anxieties and the worries that plague our daily routines. Even if we subvert them, they are always there lurking beneath the surface. The Cold War between the Soviet Union and the Western Bloc nations resulted in so many classic sci-fi movies where the characters were urged to “watch the skies” and the aftereffects of radiation were explored in two extremes: an incredibly shrinking man and an attacking 50-foot woman. 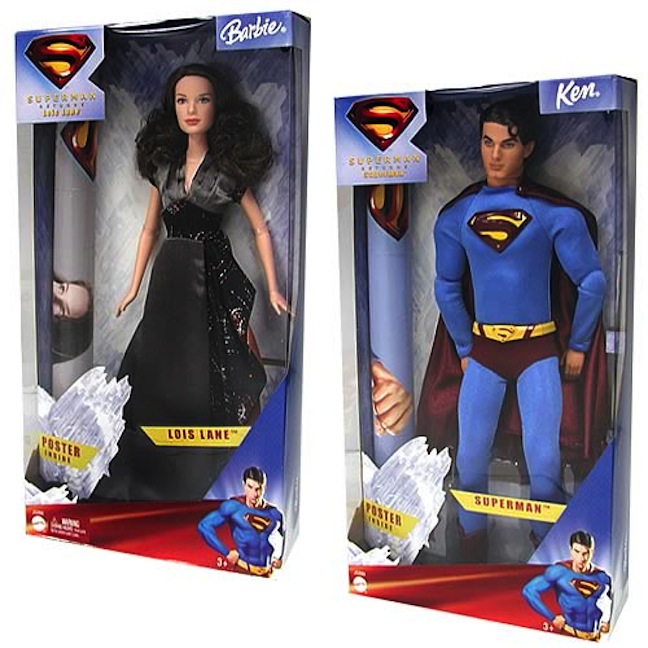 One of Mattel’s many versions of Lois and Superman.

Dolls mirror what is on the minds of their collectors, so it is a no-brainer that the toy chest should be overflowing with mannequins and action figures with logos or an oversized letter “S” emblazoned on their chests. Kids, as well as the kids in all of us, have that inherent need to be safe and to be secure. If our parents can’t get the job done, we turn our eyes to that well-built body flying high above us: A bird? A plane? No, super Fill in the Blank. There are just so many superheroes soaring above us; it might not necessarily be Superman. 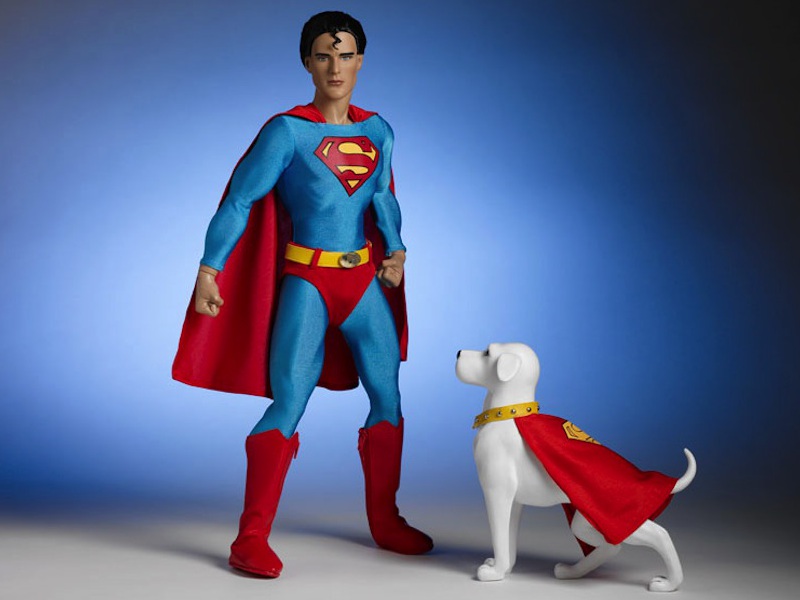 Superman and his superdog, Krypto, from Tonner Dolls.

Since the devastation of September 11, 2001, there have been continual, smaller melees. Attacks occur frequently, but the numbers killed in each subsequent plot have diminished. The reports are always chattering in the background, and Facebook users will occasionally change their avatars to honor the recently deceased of the latest attacked nation. In the 16 years that have transpired, the specter of terror has not lessened. Body counts pale in comparison to the 3,000 killed in a single morning in America. However, the fatality tally is upticking incrementally, slowly and relentlessly surging. 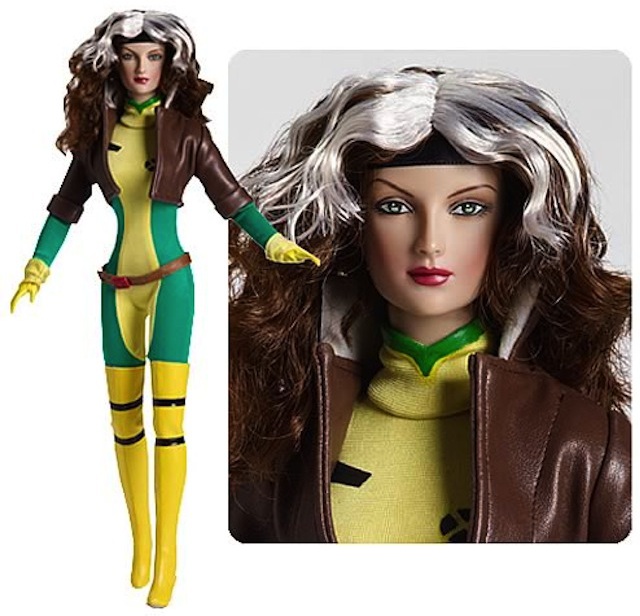 The doll versions of the superheroes that are now battling to keep the world safe from monsters have evolved in the decade and a half. No longer just men in tights, there is a plethora of women who have joined the crusade. Just as there are more and more real-life women enlisting in the military, the roster of heroic female superstars has also escalated. When the actual army, navy, air force, and Marines have expanded their XX-chromosome candidates, it makes perfect sense that the X-Men should really be relabeled the X-Men and XX-Women! 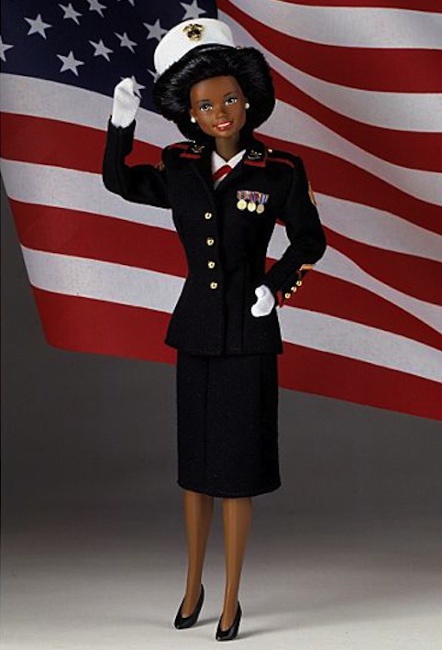 It’s sad that this blog has to be based in a terrible event that has never been finalized or conquered. It may never be defeated: terrorism doesn’t sleep. However, the folks who want it to be erased and eliminated are more awake now than they were on 9/11/2001. Here’s hoping the realm of superhero movies and dolls will one day be entirely fantasy-based. Here is a case where I truly hope that fact stays separate from fiction. 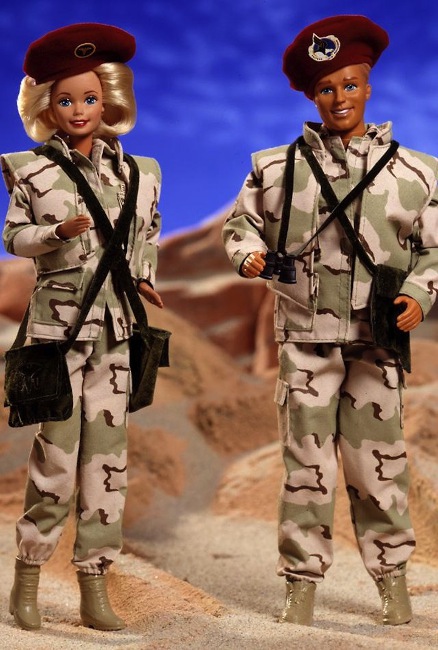 Military Barbie and Ken from Mattel. 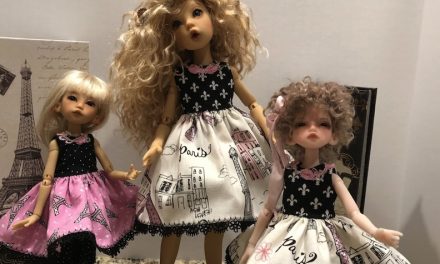