When I was a young girl, I liked to hear origin stories: how did this happening come to happen; why is this custom, customary; when did this meaning get its meaning. I was always curious and always eager to absorb knowledge as well as other viewpoints. One of the “prequels” I liked to learn about was how did a couple become a couple: what was their meeting like, and how did it progress to love. At that time, one of my adult cousins was prepping to get married, and his “origin of love” story could have been torn from a Hollywood screenplay.
According to his telling, he attended a Halloween party dressed as Raggedy Andy. As he mixed and mingled, the party’s hostess introduced him to another solo guest: a woman dressed as Raggedy Ann.  It was a union that was meant to be. They were costume-ordered for each other.

As you can imagine, this story always elicited a roomful of appreciative “ooohs” and “aahs.” After all, it was just unbelievably cute. And now, as a full-grown adult, I don’t really believe it. I think to myself, “Why would a 21-year-old single man go to a masquerade party as Raggedy Andy? Who would do that?” I mean, really, who would do that? Isn’t that akin to a hermit wearing an “I’m with Stupid” T-shirt? What would be the point? The shirt is only funny when it’s spotted next to another person. If a recluse wears an ironic outfit, does anyone get the joke?

The Raggedy Andy/Raggedy Ann love story was a big hit in my family, and that chance encounter was fodder for lots of talked-about future romantic dreams and visions. It happened at Halloween, but the outcome was just so darn sweet and angelic and pure. Not what I like about the holiday at all. I truly prefer my Halloween doll pairings to be scary and dreadful. I think that is what started to annoy me over the years about the “meet cute” tale. I would have been so much more accepting of it if my cousin had gone as a vampire, and then he was introduced to a gal dressed as a Bride of Dracula, or if he went as the Wolf Man and met a Little Red Riding Hood along the way. That would have been a grim fable I could get behind. It would have made cosmic sense.

Today, as a “grown-up,” and even as a child, I was attracted to the dark side of dolls. I really loved the Wednesday Addams character in the sitcom reruns of “The Addams Family,” and was especially drawn to her little beheaded play doll, Marie Antoinette. I think there might have been a manufactured Marie Antoinette available for purchase, but I very ingeniously made my own. (I just had to snap off a doll head and dress the torso accordingly.)

Dolls that have been intentionally or unintentionally maimed are a source of year-round horror, I’ve learned. Of course, it’s especially noticeable on October 31. The sight of sightless dolls minus their eyes, dolls missing arms, and Barbies stripped of their showgirl legs sends shivers up and down even the sturdiest spine. Dolls that have been butchered and cast aside have their very own tourist attraction, a macabre one to be sure. The Island of Dolls (Isla de las Munecas) is situated in a canal off Mexico City. It is a sanctuary for dolls that have been discarded or abused by their owners, but it’s not warm or welcoming like “The Island of Misfit Toys” from the Rudolph cartoon. No, this place has a cursed pedigree, involving a drowned little girl, a curator who went mad, and claims that the dolls are “alive” and quietly whispering to one another at night, their voices lost in the wind. The photos and background story make it an eerie and compelling destination for the brave at heart. The Internet lets us all be global tourists without having to leave our houses. We can be psychically uncomfortable while enjoying the comforts of home.

Another Halloween-perfect encounter I discovered is a video on YouTube. Set in the Philippines, this five-minute clip is a psychotic mishmash of Whitney Houston, demonic possession, the oft-applauded little black dress, and a coterie of captured baby dolls. I urge you to watch this tour-de-force by a very talented young lady (maybe she’s 14 or 15 at best) and stay to the end. The dolls make an unexpected and chilling entrance, and it will leave you flabbergasted.

It’s proof that the allure and legacy of dolls is universal and generational spanning. A future graduating class of Stephen King and Anne Rice is most certainly alive and well.

When we were children, dolls were the receptacles for our love and our dreams; so it makes sense that when we grow up and become jaded, they become the stand-ins for our anxieties and our worries. Of all the scary doll-centric flicks I’ve ever watched—and there have been dozens and dozens—the third installment of “Trilogy of Terror: Amelia” still holds its own. It is a screamfest of blood-curdling shrieks and paranoia. Yes, in the bright sunlight, it can be viewed as campy and hysterical. On the cusp of October 31, though . . . well, it’s a different story. After you watch this clip of the film’s climactic showdown between terrified collector and overwhelming collection, I dare you to turn your back on Barbie. I’m already looking over my shoulder as I wish you a “Frightful and Doll-lightful Halloween.”

Photo Caption
Dolls that make you shudder and tremble are focal points of the Halloween celebration. The voodoo doll is a creation that has tirelessly worked its “old black magic” spell. Like Cole Porter flippantly wrote, “You do that voodoo that you do so well.” 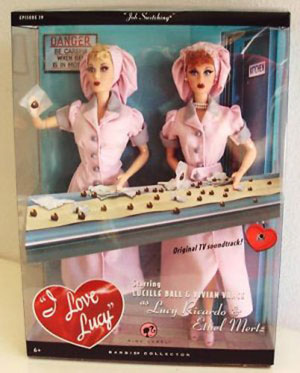