The Mattel Toy Fair venue is always a mecca for doll fanciers who want to see what will be lining store shelves throughout the upcoming year. After almost 60 years as the perennial It girl — her birth date is March 9, 1959 — Barbie is still front and center as the company’s face, figure, and perennially sunny girl-next-door. 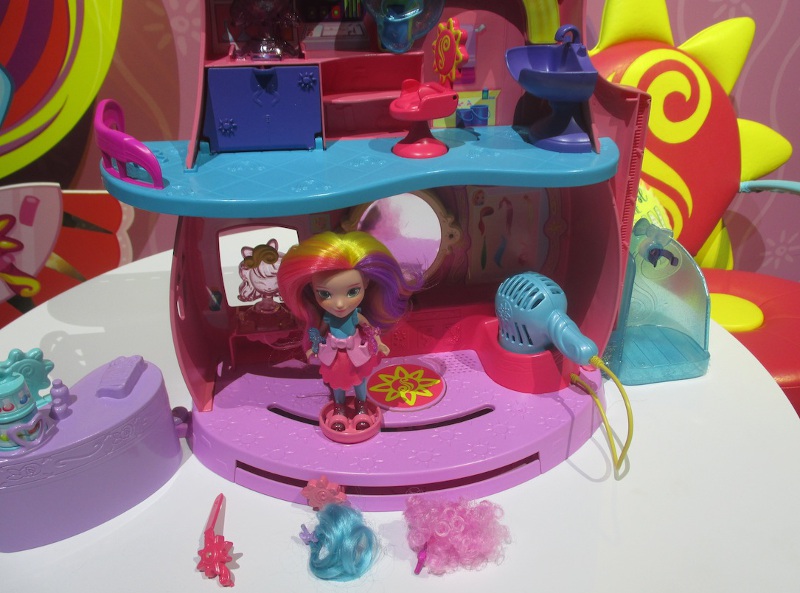 Sunny Day, a 10-year-old whiz with waves, curls, and dyes.

While it’s true that Barbie is always smiling, grinning, and absolutely beaming, the 59-year-old “teenage” fashion model was joined in the showroom by another upbeat, optimistic young’un. Mattel has high hopes for its rendering of Sunny Day. The Nickelodeon cartoon character has been made into a doll, complete with a hair salon. For the uninitiated, Sunny Day is a mere 10 years old, but is the best hairstylist in her hometown of Friendly Falls. Eschewing child-labor laws and health code violations — her assistant is her talking pooch, Doodle — Sunny Day has a head for business and a can-do attitude that is inspirational and motivational. 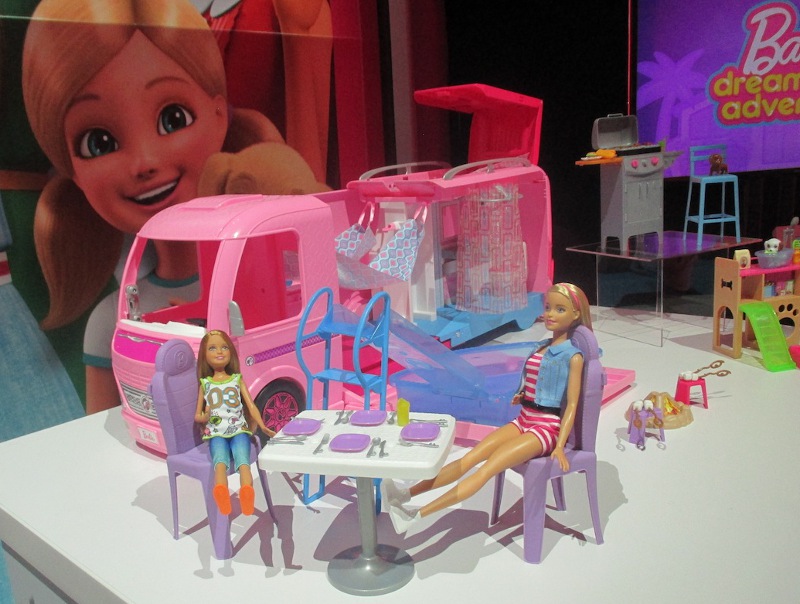 That’s the theme that was underscoring much of Mattel’s offerings this Toy Fair go-round. The displayed dolls were all emblematic of Barbie and her associates striving to accomplish different roles, surprising jobs, unexpected hobbies, and enviable skills. Settling into that group of aspirational and inspirational toys, Mattel’s current batch of dolls is surprisingly revelatory for what it showcases and promotes. 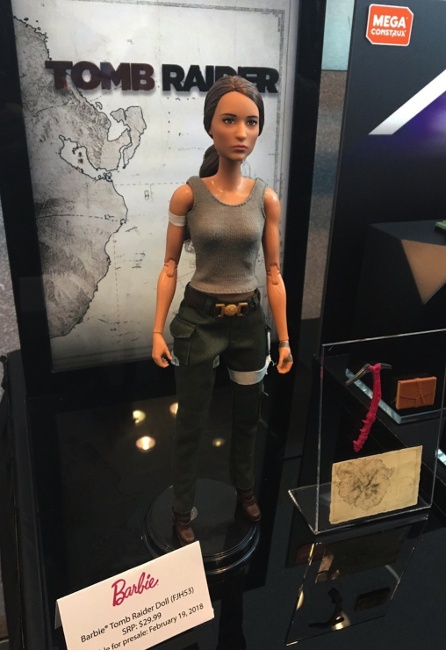 In addition to pop princess Barbie and hair guru Sunny Day, Mattel is also standing behind the archaeological adventurer Lara Croft. The computer-game vixen has had success as a calendar girl (yep, the CGI image was imagined in various pinup girl poses), an action figure, and the star of a live-action string of films. Previously portrayed by Angelina Jolie, Lara Croft is now being given a reboot as a slimmer, less curvaceous soldier of fortune. Starring Oscar winner Alicia Vikander (Jolie was an Academy Award winner, too), the newly produced Tomb Raider series features Vikander who is not as buxom or bodacious as Angelina Jolie. The Swedish celebrity has a background in dance and ballet so her physical aptitude will serve her well as she climbs, rappels, and narrowly escapes doom in this big-budget action flick.

The Mattel 2018 version of Lara Croft looks an awful lot like the actress who is embodying her. It is a terrific job of sculpting and dressing a doll to look like a smart, pretty, and athletic hunter of treasures.

Mattel’s showroom that highlights Barbie was awash in pink, and the bright rainbow colors do make her bigger picture/bigger ambitions hard to perceive. When you are walking through the Mattel doll arena, it truly is like having a pair of rose-colored glasses stapled to your face. Everything is cheery and cheerful, radiant and rosy. 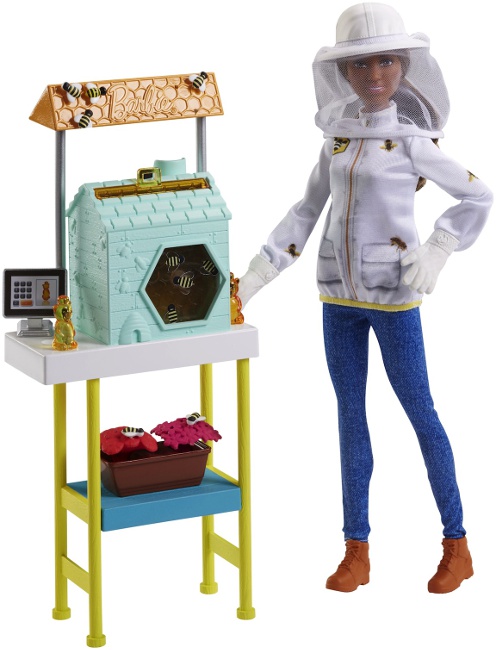 Barbie’s professions have expanded into uncharted terrain. She has popped up as a beekeeper for 2018. In both Caucasian and African-American versions, Barbie is still smiling despite the swarm of bees that threatens to overwhelm her. Clad in a white jacket and a netted, veiled hat, Barbie is doing her best to keep bees alive and well, helping to ensure our planet’s existence. Barbie is a better woman than I, because those bees looked pretty pesky and fiercely frisky! 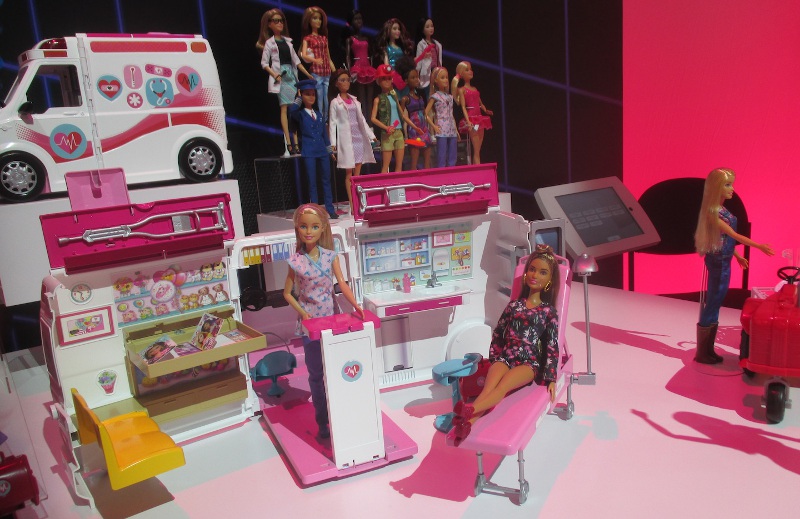 Another career that had a lot of space dedicated to it in the showroom was Barbie’s hitch as a mobile health-care facilitator. With her medical vehicle, complete with all kinds of monitors, scanners, probing equipment, and recliners (with a tinge of pink throughout), Barbie is making a difference in hard-to-reach communities and neighborhoods. 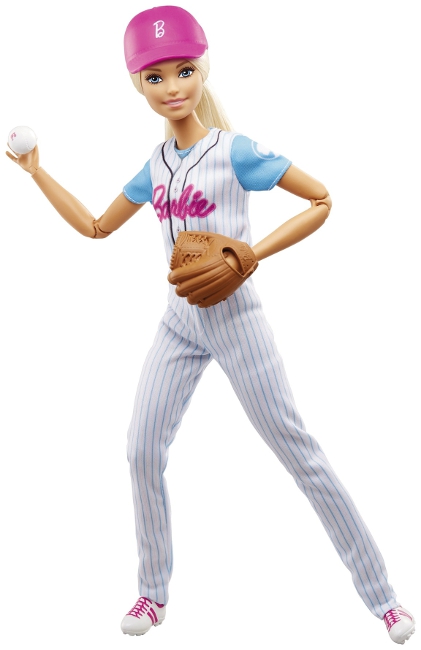 Barbie has burst beyond being a cheerleader or a pep rally captain. Nowadays she is more likely to be pitching from the mound, striking a blow for young girls’ confidence and self-esteem. 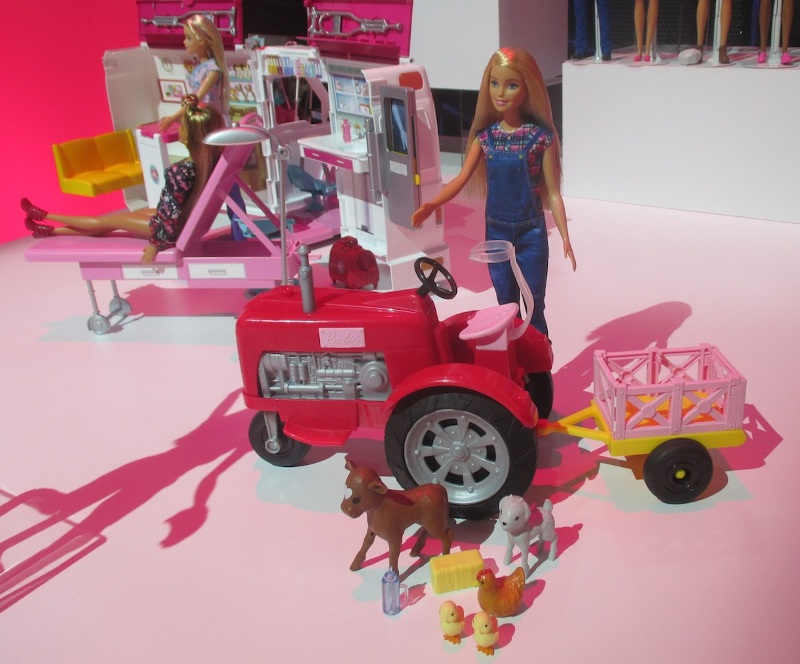 Farmer Barbie and her tractor

The notion that Barbie — and any girl in the world — can be what she dreams to be is very empowering and laudable. Likewise, Mattel is continuing to strive to make Barbies of different heights and widths. Their Farmer Barbie — accompanied by the cutest critters ever — and her tractor are designed along the taller, leaner scale. Barbie is getting back to the earth and giving back to the land. 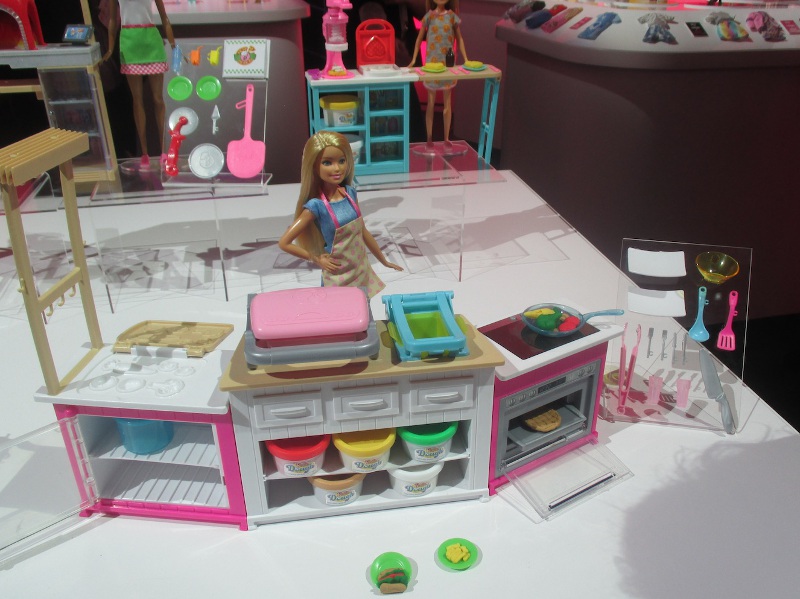 She’s also concentrating on providing, cooking, and preparing all types of meals, ranging from dinner to dessert, gourmet to non-GMOs. When so many young girls are suffering from body issues, reverting to anorexia and/or bulimia, it is quite helpful to feature a doll that has a partnership with food. Barbie is cooking and serving meals that are healthy and healthful. (Plus, there is a new cookbook with her favorite recipes hitting shelves as a tie-in.) 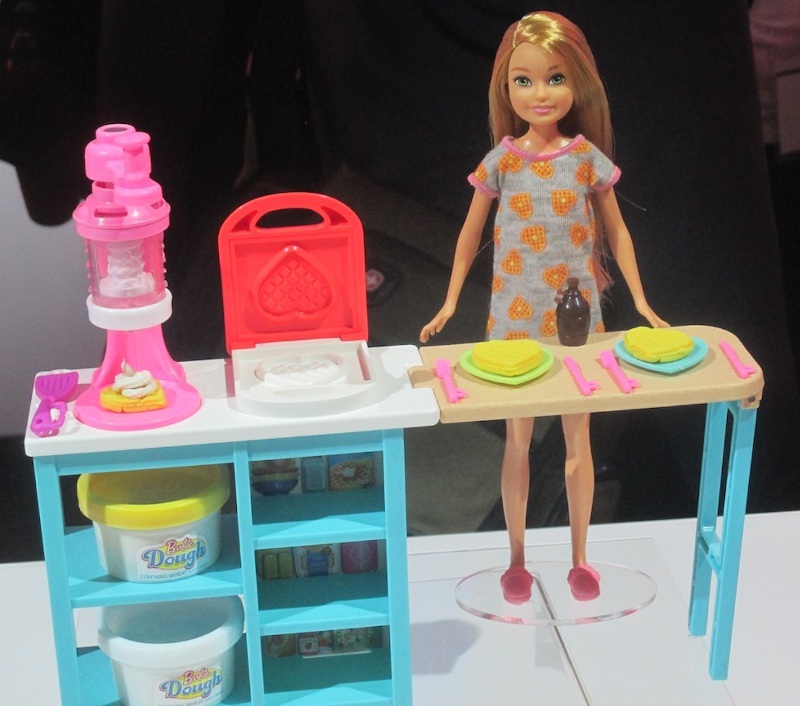 With a whole host of dolls in tune with in service occupations — baby doctor, paramedic, EMT driver — and professions that have connections to healthy food and smart agriculture, Barbie is not mere eye candy. She’s not a doll that simply belongs vamping and sauntering on a pink-carpeted runway. 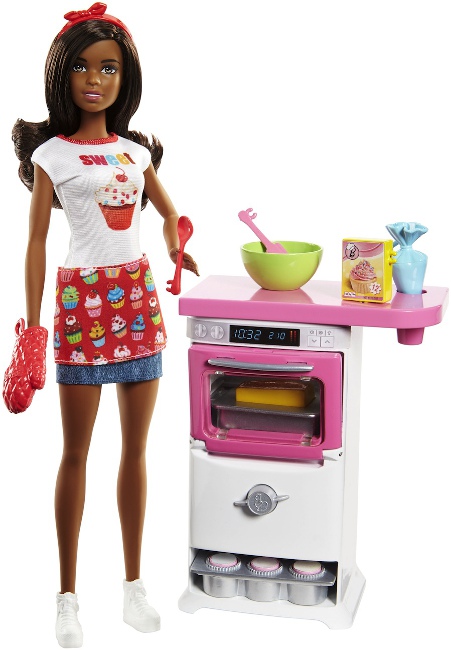 Barbie as a Bakery Chef

The Barbie of 2018 is more likely to be taking care of a sick cat in her veterinarian play set than modeling on a catwalk. And that is a big stride forward in the world of doll playing.