I like the notion of artificial intelligence. I have enough confidence in myself that I don’t think I’ll ever find myself head-over-heels in love with a disembodied voice, like the poor nebbish character that Joaquin Phoenix plays in the movie “Her.” In that 2013 film, directed by Spike Jonze, Phoenix plays a guy who is down on his luck and responds enthusiastically and recklessly to the sultry tones of his cyber device (the Her of the title is a futuristic version of Siri or Alexa, and is vocally performed by Scarlett Johansson).

As you can imagine, falling in love with a series of gigabytes and data is not the smartest thing for a human to do. We — the smart moviegoers — know that this unique relationship is doomed before any newly coded software program can be downloaded. Still, the allure of a machine — a friendly bit of artificial intelligence (AI) — which seems to know us, can serve us, and is always there for us, is a siren call that we mere mortals can’t resist. Enter Mattel’s newest, mind-blowing device: Hello Barbie Hologram. 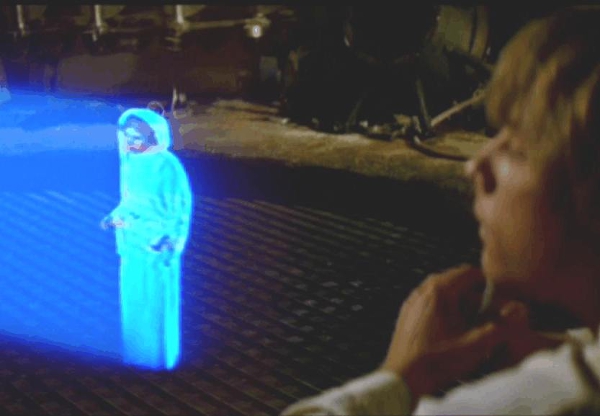 I couldn’t help but think of “Star Trek” or “Star Wars,” where hologram images of characters talk, beseech, and relate to fellow cast members. Who can’t instantly recall the hologram image of Princess Leia, with her cinnamon-bun hairdo cloaked by her veil, imploring the film’s heroes: “Help me, Obi-Wan Kenobi. You’re my only hope!” Well, the Hologram Barbie, which should be hitting store shelves in time for Christmas 2017, doesn’t have the fate of the galaxy in her hands, but she does have the capacity to completely upturn the world of conventional play. 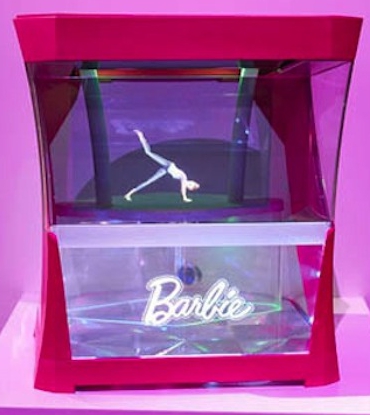 (Hologram Hello Barbie shows off her agility with gymnastics.)

At the showroom, I was treated (and totally astonished) by the Hologram prototype they had for demonstration and interaction purposes. Currently, the “holodeck” that Barbie will pop up in is about the size and shape of a miniature aquarium or hamster habitat. Barbie and her voice can be turned on, and her image moves about, dances, does gymnastics, and walks around in her tiny domain.

The image functions like all of the holograms you’ve seen in sci-fi movies — except here it is real. Hologram Barbie does exist, and she is able to convert herself into whatever you (or your daughter) feel most comfortable with. At first she flickers onto the hologram stage as the conventional sunny blonde. 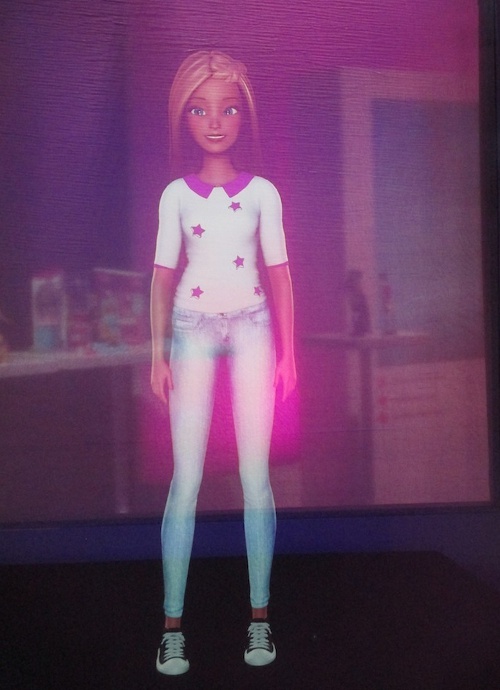 (Hologram Barbie as a California blonde.)

You can request that she changer her appearance: hair color, eye color, skin tone, ethnic background. Barbie will conform and can go from a Malibu blonde to a Manhattan brunette, and can change from being a Caucasian to a Latina to an African American. She is there to reflect the evolution her three-dimensional dolls have undergone. 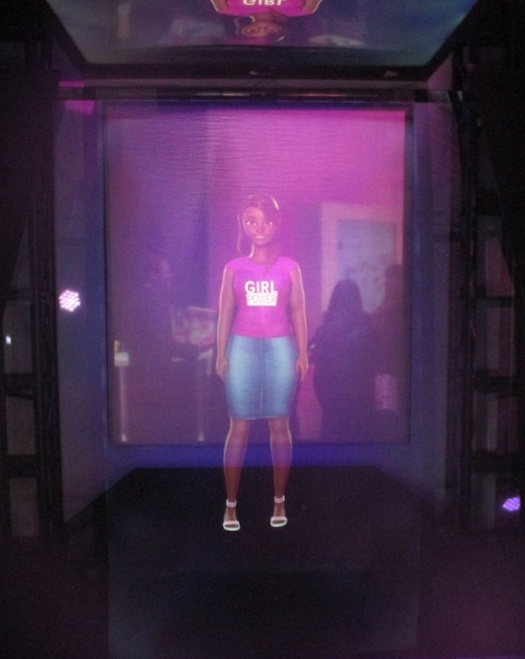 Besides the wow factor of seeing Barbie breakdance, “do the dab” (pretending to sneeze into her sleeve), and attempt the Peppermint Twist (a nod to the parents or grandparents who might be indulging their children with this toy), Hello Barbie Hologram also speaks conversationally with her newfound human friend. She can give weather reports that are cute and informative. (“Here in Malibu, it’s 75 degrees! Flip-flop weather,” she shared with us during the tour. Parents can set the AI’s parameters to give local forecasts, directions, and updates on children’s daily activities.) Because Mattel knows that the Hello Barbie Hologram is aimed at a children’s market, it allows the parents to control access to data — the current model does not go on the Web, rather it is dealing more with an intranet, much safer for anxious parents, rather than the potentially dangerous Internet. 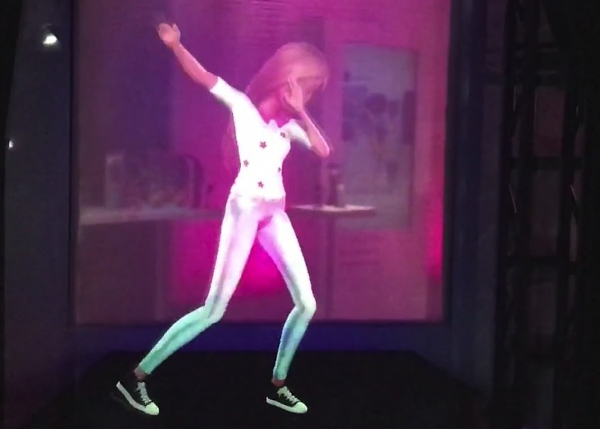 (Hello Barbie does the dab!)

The “holo” Hello Barbie can act as a reminder of daily chores — she can nudge your daughter, in a cheerful and joshing manner, to brush her teeth, wash her hair, study for a big exam, and make a birthday present for any member of the family. This next step in playtime has created a virtual doll that easily assumes the role of schedule keeper, confidence builder, fact memorizer, and goofy girl next door.

There’s a lot to consider with this hologram doll. She is a visual version of the GPS navigation voice that adults use to guide them from home to unfamiliar destinations. People are more and more dependent on the AI voices found on their phones to remind them of dental appointments, look up pop culture trivia, and ease any worries they have about missing deadlines. 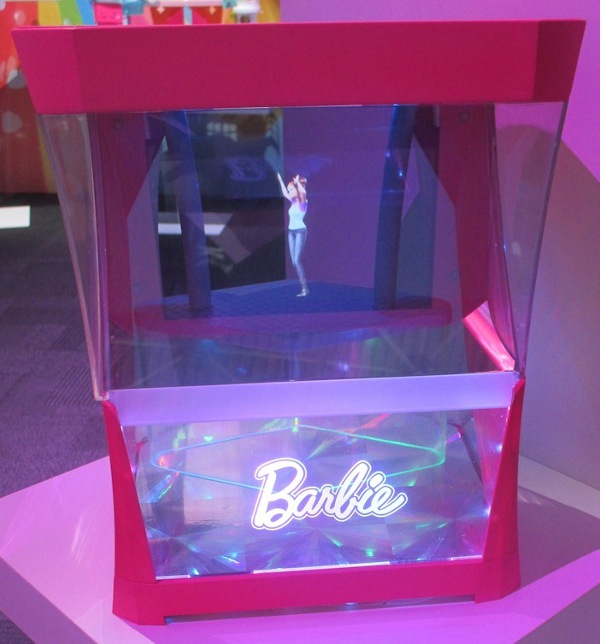 Just as Siri and Alexa have become AI crutches for grown-ups — helping them become more organized, punctual, informed, and interesting — the hologram Hello Barbie has that same capacity for children and any other member of a household who decides to interact with the image. Since Mattel assumes that most of the human owners will be children, the Barbie has been specially designed to recognize kid-friendly speech patterns. She is made to understand the sometimes jumbled, truncated lexicon of pre-tweens, tweens, and teens.

She is geared to set alarms, provide night-lights, engage in favorite, customizable play, and use her Bluetooth capability to play songs that are stored in the family’s music list. This Barbie is both babysitter, best friend, and virtual mentor all rolled into one. 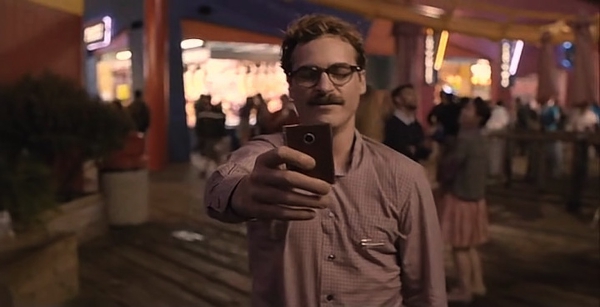 (Joaquin Phoenix’s character on a date with his AI girlfriend in “Her.” Courtesy of Movie Star News)

Spending 15 minutes in her presence, I sort of understand where the unfortunate Joaquin Phoenix was coming from. If he could be undone by just Scarlett Johansson’s husky, raspy voice, imagine if he had seen her face and shape! It’s a good thing he only had an AI’s mind to deal with. This Hello Barbie Hologram unlocks the portal to all manner of futuristic interactions and unimagined possibilities. I’m sure some fantasy-film, sci-fi buff will program Barbie to beseech Obi-Wan or some other fill-in-the-blank name in nothing flat: “Help me, GI Joe. (Or Hello Kitty?) You’re my only hope!”

While wary parents will take the dangers of the Internet to heart, and will prevent the hologram doll from leading their children into unchaperoned, adult-content territory, I hope that they do set a time limit for their offspring’s customizable play. This latest compelling ideation of Hello Barbie should be a fun pastime, an entertaining and enjoyable novelty. 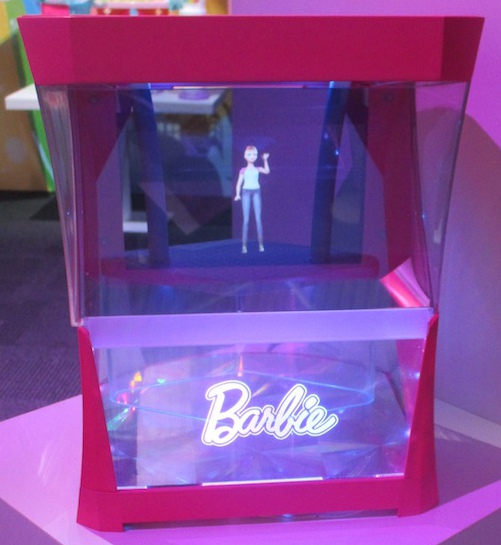 It shouldn’t replace actual fun time with a real, flesh-and-blood friend. Make sure your kids realize the hologram is just a smart toy. Don’t let them become exclusively wrapped up in her.